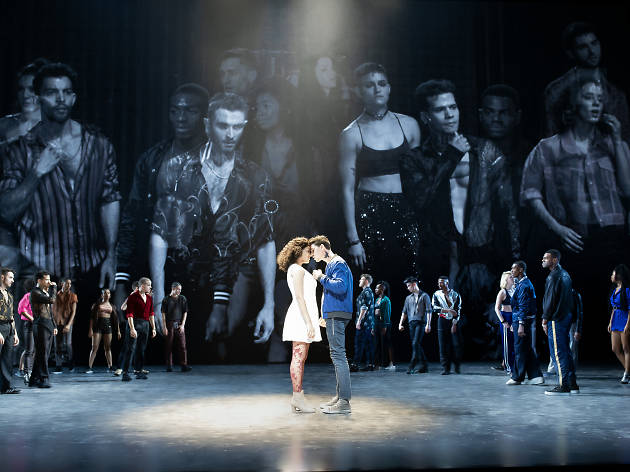 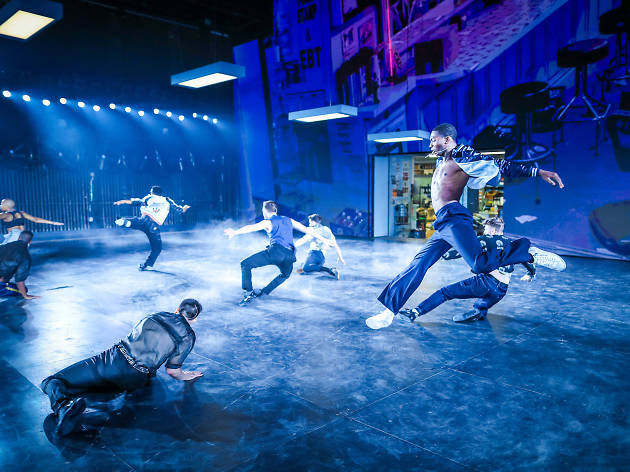 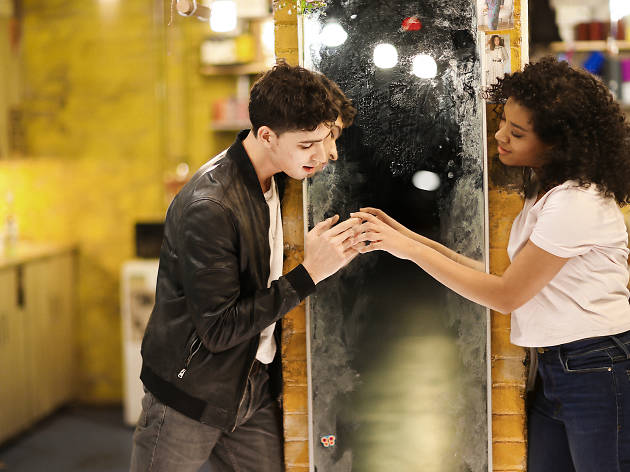 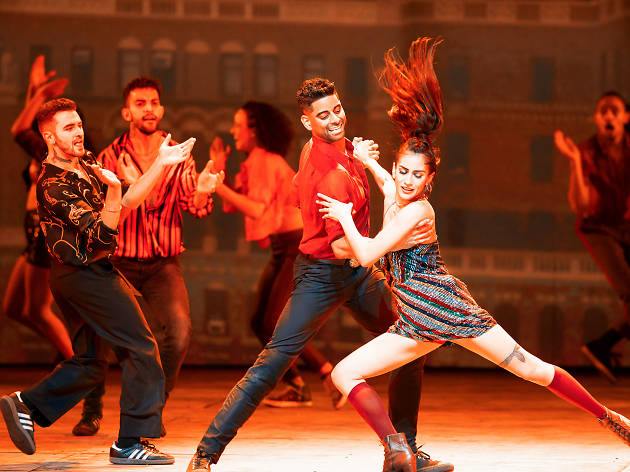 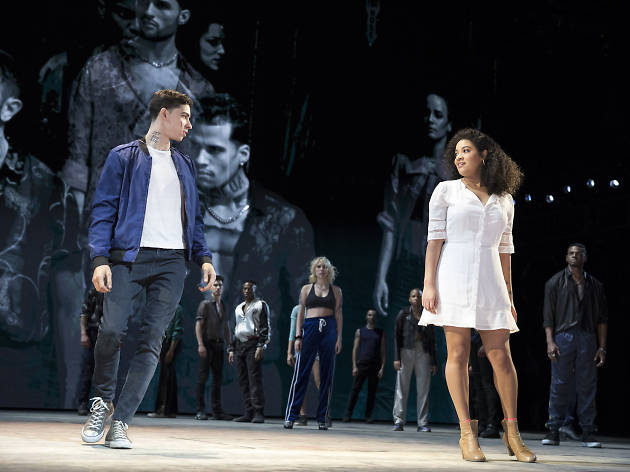 There’s a rumble at the start of the new revival of West Side Story—not a fight, but a vibration: the low, faint, ominous sound of something coming. As in the musical’s most recent Broadway production in 2009, actors playing gang members file onstage and stare out at the audience, daring us to ignore them. This time, however, the menace is magnified; they are dressed in the clothes of modern street gangs, and close-ups of their hard faces and neck tattoos (“JET FOR LIFE”) tower behind them on a 30-feet-tall LED screen at the back of the otherwise empty stage.

Like much of Ivo van Hove’s bold, often thrilling production, this opening sequence is big and small at once. Throughout the show, live scenes coexist or alternate with filmed ones, including many that occur offstage entirely; detail is blown up into spectacle, and spectacle is subsumed into detail. Van Hove’s West Side Story functions very differently from any we have seen before. If the result is sometimes murky, it is also frequently revelatory—a major accomplishment in a show whose status as a classic threatens to freeze it in time and relevance.

Indeed, this revival of West Side Story tacitly assumes you know the story already—much as Arthur Laurents, who wrote it in 1957, probably assumed his audience was familiar with its source material, Romeo and Juliet. Tony (Isaac Powell) is an emeritus member of the Jets, a New York gang led by his best friend, Riff (Dharon E. Jones). Though of different national origins—and, in this version, different races and ethnicities—they consider themselves Americans, unlike the Latino immigrants who make up the rival Sharks, led by Bernardo (Amar Ramasar). When Tony falls in love with Bernardo’s sister, Maria (Shareen Pimentel), tragedy takes up the chase.

Van Hove’s hand and eye are constantly felt, augmented by those of his partner, the set and lighting designer Jan Versweyveld. His revival plays fast and tight with the text: Though few major sections have been cut (with the notable exception of the second act’s first scene, including the song “I Feel Pretty”), it barrels forward in just over 100 minutes, with no intermission.

The production is conservative when it comes to Leonard Bernstein’s dynamic and still-delightful music, played by a full 25-piece orchestra, and to Stephen Sondheim’s lyrics. But the work of original auteur-director Jerome Robbins has mostly been set aside. Teresa De Keersmaeker’s choreography is less balletic than Robbins’s famously was; it is athletic, contemporary, low to the ground and not quite in synch. (It’s not heightened but guarded—less snap and leap than stop, drop and roll.) But there are moments of powerful aggression and also of understated beauty, such as a dreamy fantasy of romance that extends to same-sex couples and even to the dead.

Many scenes take place in a spatial netherworld; when Tony and Maria sing the balcony-scene duet “Tonight,” it is not on a fire escape but in a symbolic abstraction, where grasping blobs of gang members pull the lovers back as they reach toward each other. Less successful is the staging of the complicated “Tonight” quintet later on, in which the song’s five distinct groupings are muddled together. Because the racial makeup of the enemy parties no longer sets them apart, that work falls to An D’Huys’s costumes, which come in shades of blue for the Jets and red for the Sharks (the colors of the Crips and the Bloods—and, for that matter, the Democrats and Republicans). In the larger dances and fights, it is sometimes hard to tell who is on which side, which may be intentional.

Not all of Van Hove’s gambits pay off. The director’s strength has never been his sense of humor, and the Jets’ comic-relief number, “Gee, Officer Krupke,” lands with a dour thud. (The delicious Pippa Pearthree finds more actual comedy in the tiny role of a frazzled adult do-gooder.) High-concept references to modern social issues—police violence, the border wall—register only glancingly. And a late scene in which the Jets assault Bernardo’s girlfriend, Anita (Yesenia Ayala), tips into luridness.

But although the filmic elements can be distracting in the larger scenes—your eye keeps getting pulled upward, away from the dozens of flesh-and-blood dancers doing very fine work in person—they are extremely effective in the show’s smaller moments. The most surprising thing about Van Hove’s West Side Story, in fact, is that for all its big gestures and statements, it is at its best when it focuses on the central relationship between Tony and Maria, which often gets lost in other productions.

Powell, with his sweet manner and achingly lovely voice, is exceptional: This is the first West Side Story I’ve seen in which Tony emerges fully and compellingly as the show’s central character. (When he sounds out the syllables of his lover’s name in “Maria,” awestruck, he makes the song seem utterly spontaneous.) Pimentel not only has a gorgeous soprano but also the acting ability to pull off the difficult final monologue. The camera allows us to see moments of intimacy and charm that make their story heartbreakingly personal; at the end of “One Hand, One Heart” when Tony and Maria are singing to each other, their breath fogs the mirror between them.

Van Hove’s West Side Story is likely to divide admirers of the show into warring camps. But the revival approaches the show with the confidence of knowing that it does not need to be definitive. There will be other West Side Storys, including Steven Spielberg’s film later this year. Meanwhile, if Broadway is to be a place where artistic risk is valued, there’s a place for this.