What Happened?: The Michaels Abroad

If we are letting ourselves tell difficult truths about theater, allow me to share one of my own: Writer-director Richard Nelson’s Rhinebeck Panorama—a long series of conversational, detailed, plotless plays about white, liberal, middle-class, middle-aged families in upstate New York—has never really been my speed. The latest and ostensibly final installment of the cycle is called What Happened?, a question I find myself asking after every Rhinebeck installment. The answer in this case, as always, is: not much.

To these plays’ many admirers, that is the point. Nelson’s intimate portraits of family dynamics and conversations, of which there have now been a dozen since 2010 (including seven about the Apple family and three about the Gabriels), deliberately eschew conventional storytelling and plot to cast a gentle light on groups of characters as they try to make sense of the worlds around them. In the program, he admiringly quotes the playwright Harley Granville Barker: “One is tempted to imagine a play—to be written in desperate defiance of Aristotle—from which doing would be eliminated altogether, in which nothing but being would be left.”

In What Happened?, that entails reuniting us with the Michael family, last seen in 2019 and now gathered for a dance festival in the French town of Angers. The clan’s most prominent member, a modern dance choreographer named Rose, has recently died of COVID, and is the subject of reminiscences by a group that comprises her widow (Maryann Plunkett), her niece (Matilda Sakamoto), her ex-husband (Jay O. Sanders), their daughter (Charlotte Bydwell) and three former members of her company (Rita Wolf, Haviland Morris and Yvonne Woods), one of whom is married to her ex.

The audience sits in two rows on all four sides of the playing space, and for nearly two hours without intermission we are invited to act as flies on the wall for the characters’ discussions of Rose: her work, her death, the division of her estate, that time Merce Cunningham gave her flowers. On the night I saw What Happened?—September 8, 2021, which is exactly when it takes place—there happened to be an actual fly buzzing around Jason Ardizzone-West’s welcoming set, which has no walls, but I daresay this fly wasn’t there for the dialogue anyhow; more likely, it was drawn by the lasagna that is prepared and consumed in real time over the course of the play.

What Happened? has many fine qualities: The relationships are believably drawn, the back stories have some flesh on their bones, and it is a pleasure to bask in the highly skilled naturalism of the ensemble cast, especially the superb Plunkett and Sanders. The second half of the play features four brief dance performances, by Bydwell and Sakamoto, that introduce a welcome element of variety to the proceedings. (The dances themselves, attributed to Rose, are drawn from choreography by Dan Wagoner.)

But whereas many of Nelson’s earlier Rhinebeck plays center on arguments about contemporary politics, giving them a frisson of debate, this one is elegiac and personal; it’s like the funeral reception for a person you don’t know. When a reference to contemporary discourse slips in briefly—in a digression about an old family friend who has been accused of cultural insensitivity (“I really don’t think my theater’s a ‘white theater.’ I have never seen it that way. Maybe I’m wrong”)—it is hard not to hear Nelson wondering how his own work fits in these days. This play, at least, doesn’t offer a strong answer. To a world with open wounds, What Happened? provides up-to-date references and soothingly dulled conversation: topical anesthetic. 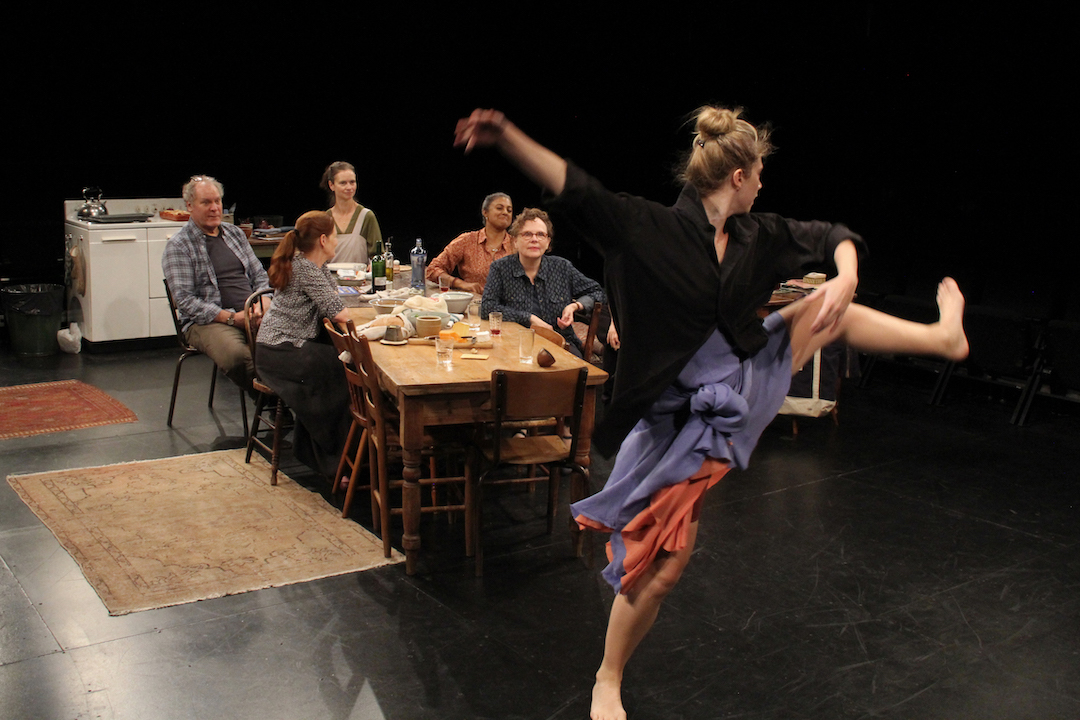