while you were partying

If you have a heart for downtown experimental theater, while you were partying may be the defibrillator you need. Soho Rep’s first production since the shutdown is a short, sharp shock of a play: an unsettling, creepily funny 50-minute exploration of anger, created by writer-director-performers Julia Mounsey and Peter Mills Weiss in collaboration with comedian Brian Fiddyment. Divided into three parts, this ball of fury is sometimes contained and sometimes flares to outrageous size, but all of it burns.

Mounsey begins the play by playing a recording of herself telling a story while she sits mutely in a chair onstage, watching us as we watch her. Her story, which she calls “The Angriest I’ve Ever Been,” involves visiting a friend from high school named Brian while he recovers from a failed suicide attempt; she loses her temper and says hurtful things, which she feels guilty about. This anecdote serves as an introduction to the staged-reading-within-a-play that follows—the work-in-progress draft, she says, of a comedy she has written by way of apology to Brian. But there’s nothing conciliatory about it: It’s a savage portrait of a pathetic man-baby monster named Brian who exists in a perpetual state of tantrum. (“I want to be a Weapon of Healing,” Mounsey explains later. “But that’s not what weapons do.”)

This version of Brian is a relentless tornado of entitlement, panic and desperation, and Fiddyment plays him with a sustained intensity that is both amazing and actually scary. His face gets red as a boil; he screams his head off, writhes on the floor, crashes into the wall. (You worry for the actor: At the performance I saw, his knuckle was bleeding by the end.) Meanwhile, Weiss—bearded, balding, affectless—drolly reads the part of Brian’s mother, who is an odd combination of enabling and controlling, like a cross between Amazon’s Alexa and HAL from 2001: A Space Odyssey. But this play-within-a-play’s outré cartoon of male failure and rage is just a facade. In the meta world of while you were partying, the true target of Mounsey’s anger is herself: her own tension, resentment, self-loathing, projection. Though she doesn’t speak a word onstage, she’s there in every line of the play, slowly peeling the grapes of wrath and seeding them with her teeth.

while you were partying. Soho Rep (Off Broadway). By Julia Mounsey and Peter Mills Weiss with Brian Fiddyment. Directed by Mounsey and Weiss. With Fiddyment, Weiss and Mounsey. Running time: 50mins. No intermission. 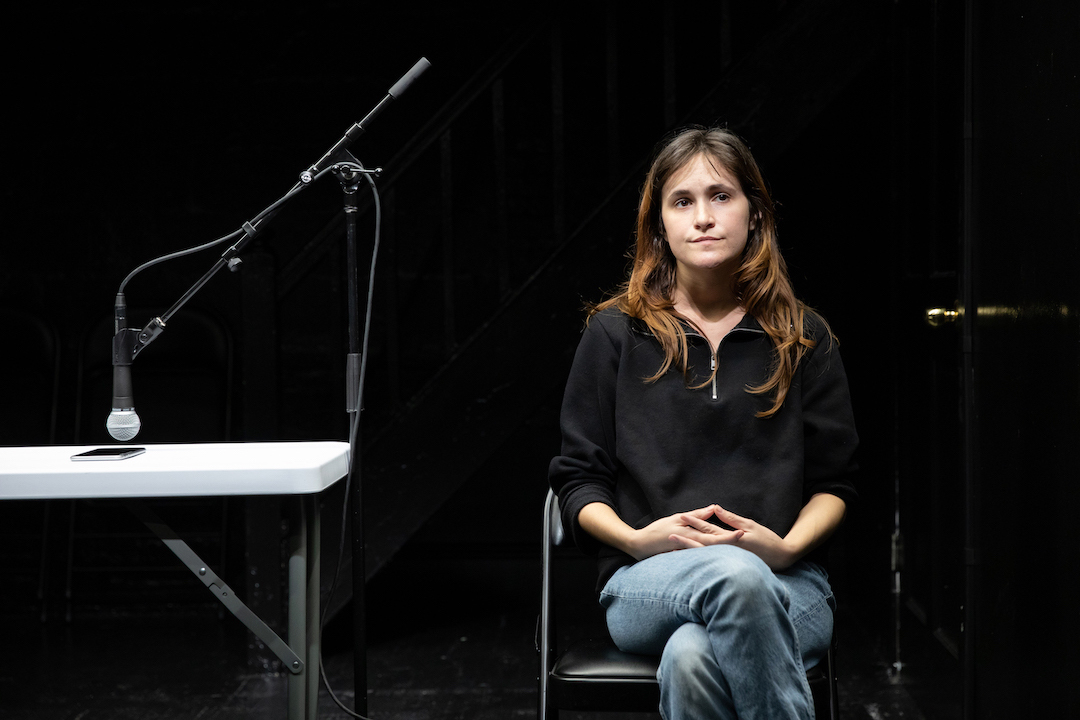 while you were partying | Photograph: Courtesy Julieta Cervantes