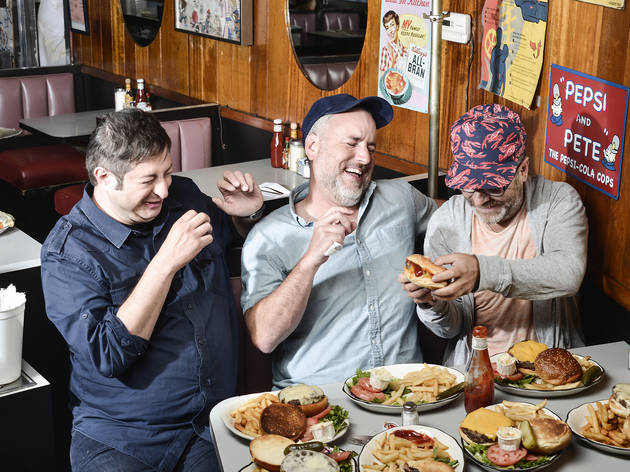 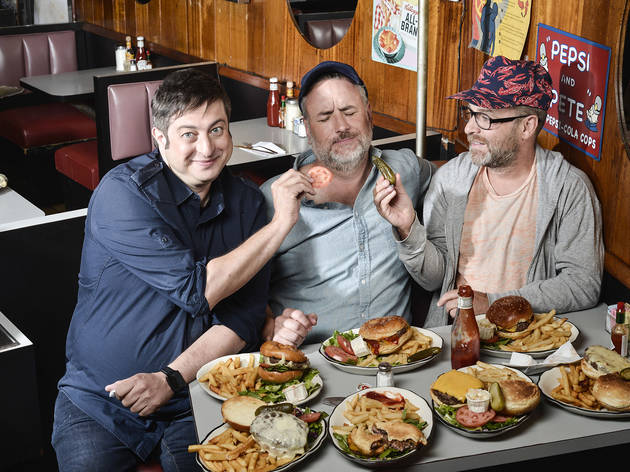 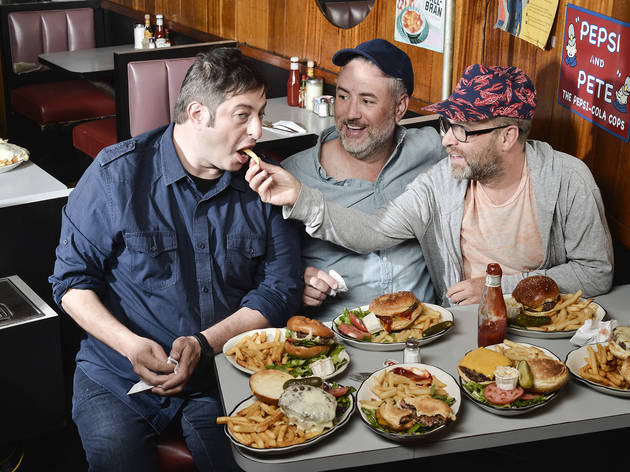 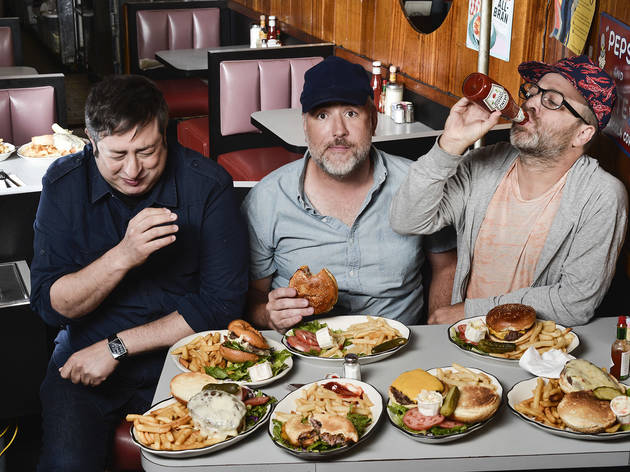 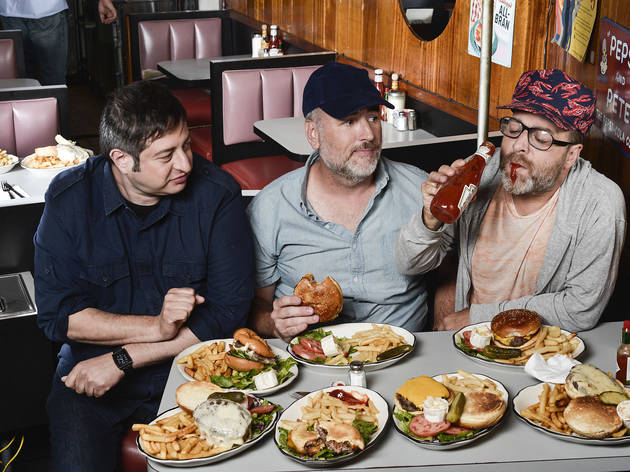 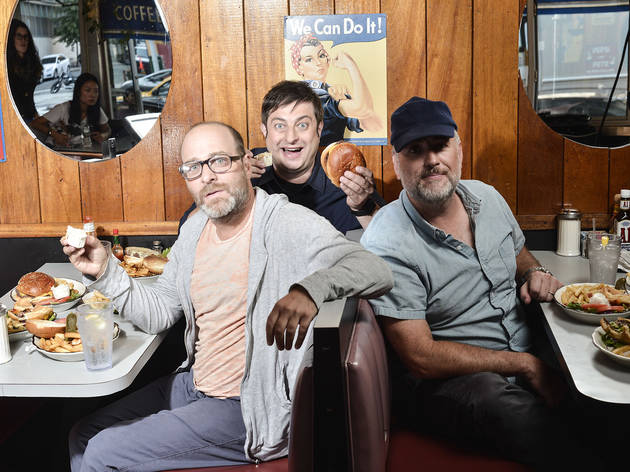 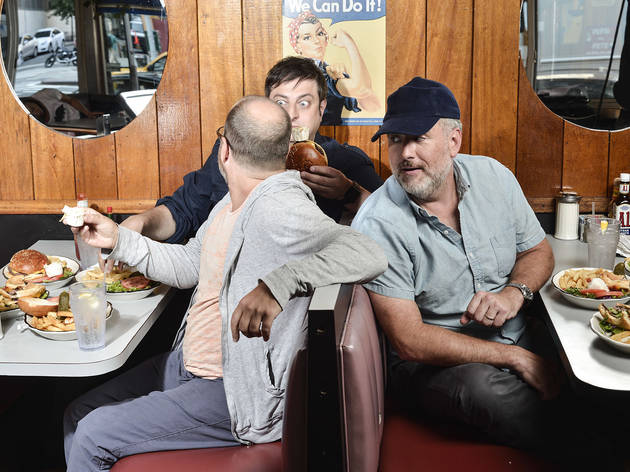 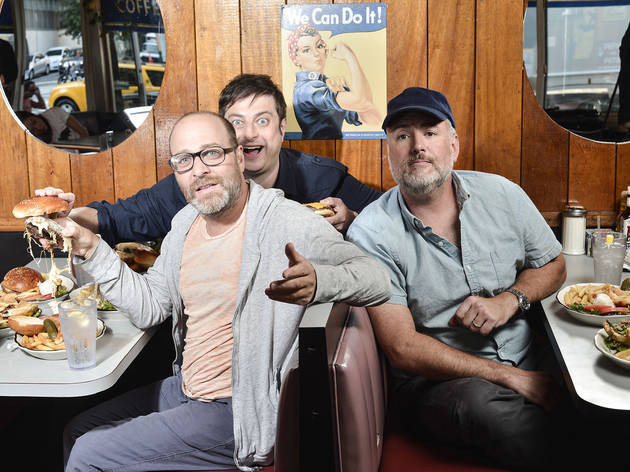 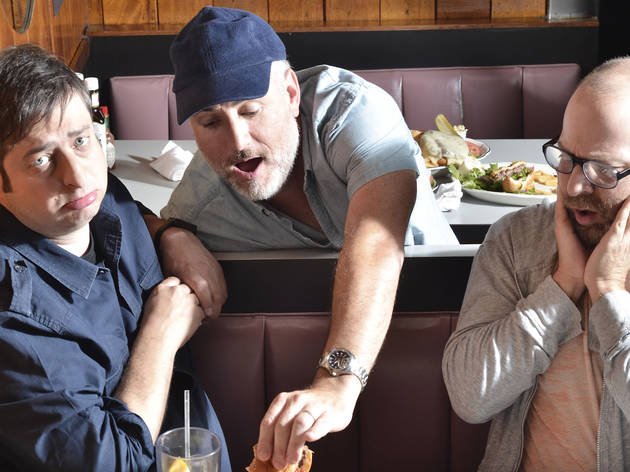 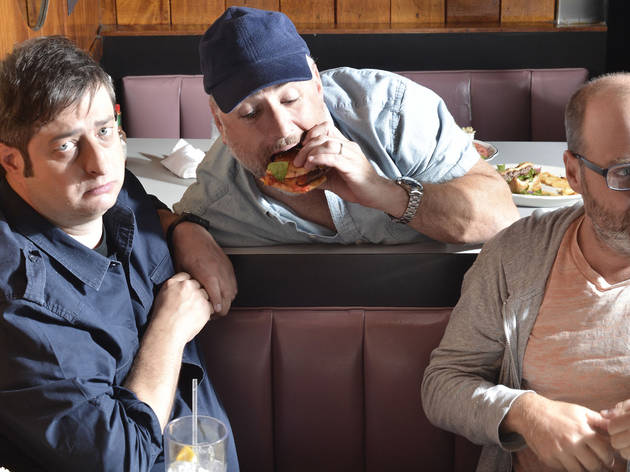 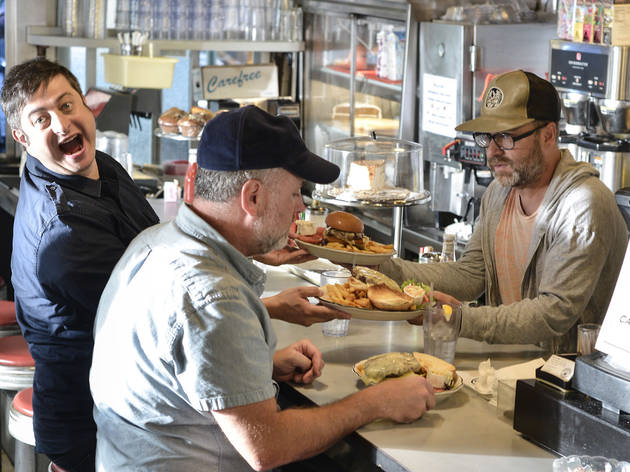 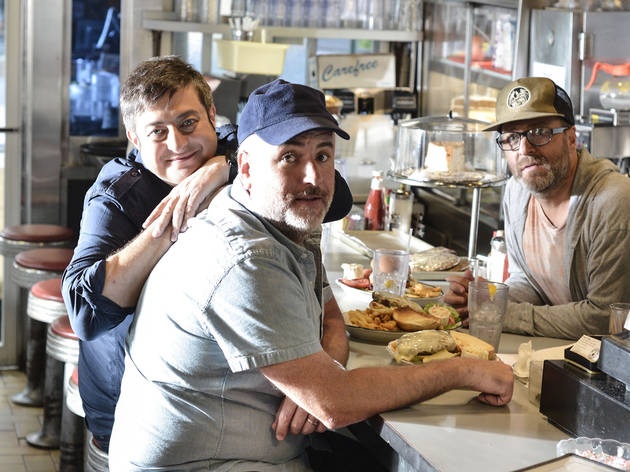 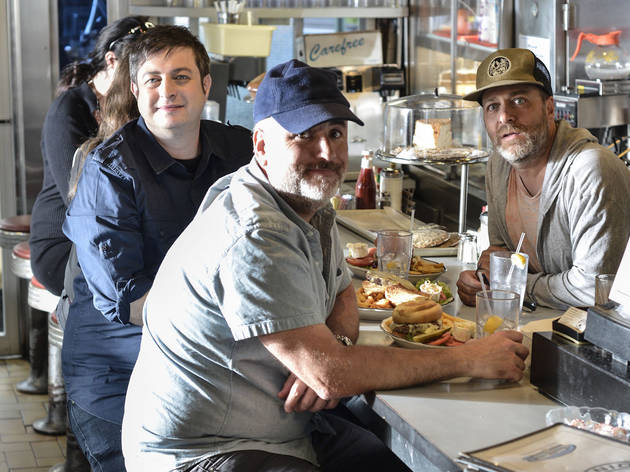 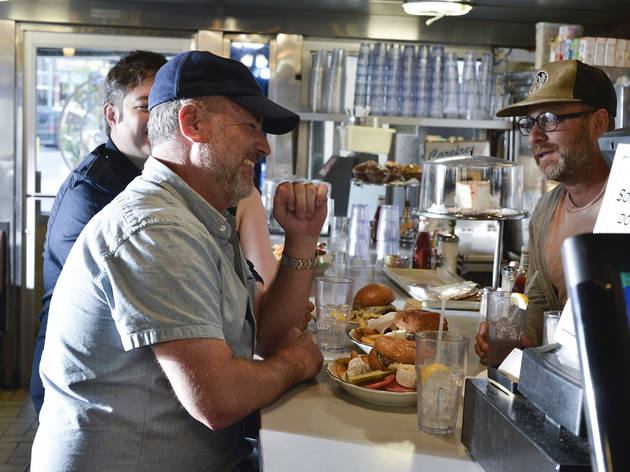 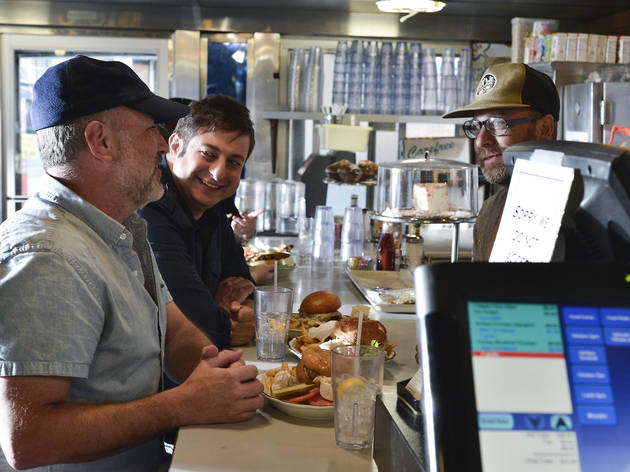 15/15
Photograph: Matthew SalacuseEugene Mirman, Larry Murphy, Jon Benjamin from Bob's Burgers
Advertising
That Chinese-food dig is Eugene Mirman busting my chops as he arrives at Tribeca’s Square Diner to obligingly eat many burgers, along with his costars H. Jon Benjamin and Larry Murphy. With Bob’s Burgers, the guys’ hit animated show, about to premiere its fifth season (one of the things we’re most excited about for fall), the funnymen were sweetly game for even our silliest requests—“John, could you please stuff a french fry in Larry’s mouth?” Hanging out with them is like hanging with your three funniest friends—if your friends were sort-of-big-deal, famous comedians. So you guys won the Emmy. That’s awesome.
Eugene Mirman: Agreed.
H. Jon Benjamin: Thanks to me.
Larry Murphy: Yeah, that’s right. Thanks, Archer. [Ed note: Benjamin also voices the title character of the FX show.]

Do you feel secure now?
Mirman: You never feel security in entertainment.
Murphy: No way.
Benjamin: I don’t think so.
Mirman: We are hopeful, and we are pleased and excited, but I don’t think you ever feel, Now, finally! I mean, I think you do if you’ve made ten or 20 seasons of something. I bet Julia Louis-Dreyfus is probably like, I’m finally okay now.

She was okay before. She’s richer than Seinfeld.
Benjamin: She owns all the garages Seinfeld keeps his cars in.
Mirman: She is a huge garage collector. Comedians on Bikes Getting Kahlua.
Murphy: Check it out on Crackle.

Jon, I think you have to say “Subaru Forester” now.
Mirman: You can ask for something pricey if you want.
Benjamin: [Leans toward recorder] I didn’t get a $250 Israeli savings bond. Now, we’ll see how much that appreciates in value, motherfuckers, and see where your Subaru Forester [gets you], you idiots.

When last season ended, the stakes were really high, and then everything was okay.
Benjamin: You’re thinking of Breaking Bad.

You almost died.
Benjamin: It picks up right where it left off; Bob is tied to a post.

That’s not where it left off!
Benjamin: And the tide…

He’s saved.
Benjamin: He is saved.
Mirman: The premiere is “Work Hard or Die Trying, Girl.” It’s a musical-off between me and David Wain’s character, Courtney, so it’s me doing Die Hard: The Musical and Courtney doing a musical version of Working Girl.
Murphy: We have a lot of special guests: Bill Hader, Zack Galifianakis, Carl Reiner…
Mirman: There’s an episode called “Tina, Tailor, Soldier Spy,” with Rachel Dratch. There’s the “Millie-churian Candidate.” Like, You know what Bob’s needs to do? Something that’s kind of inspired by The Manchurian Candidate. 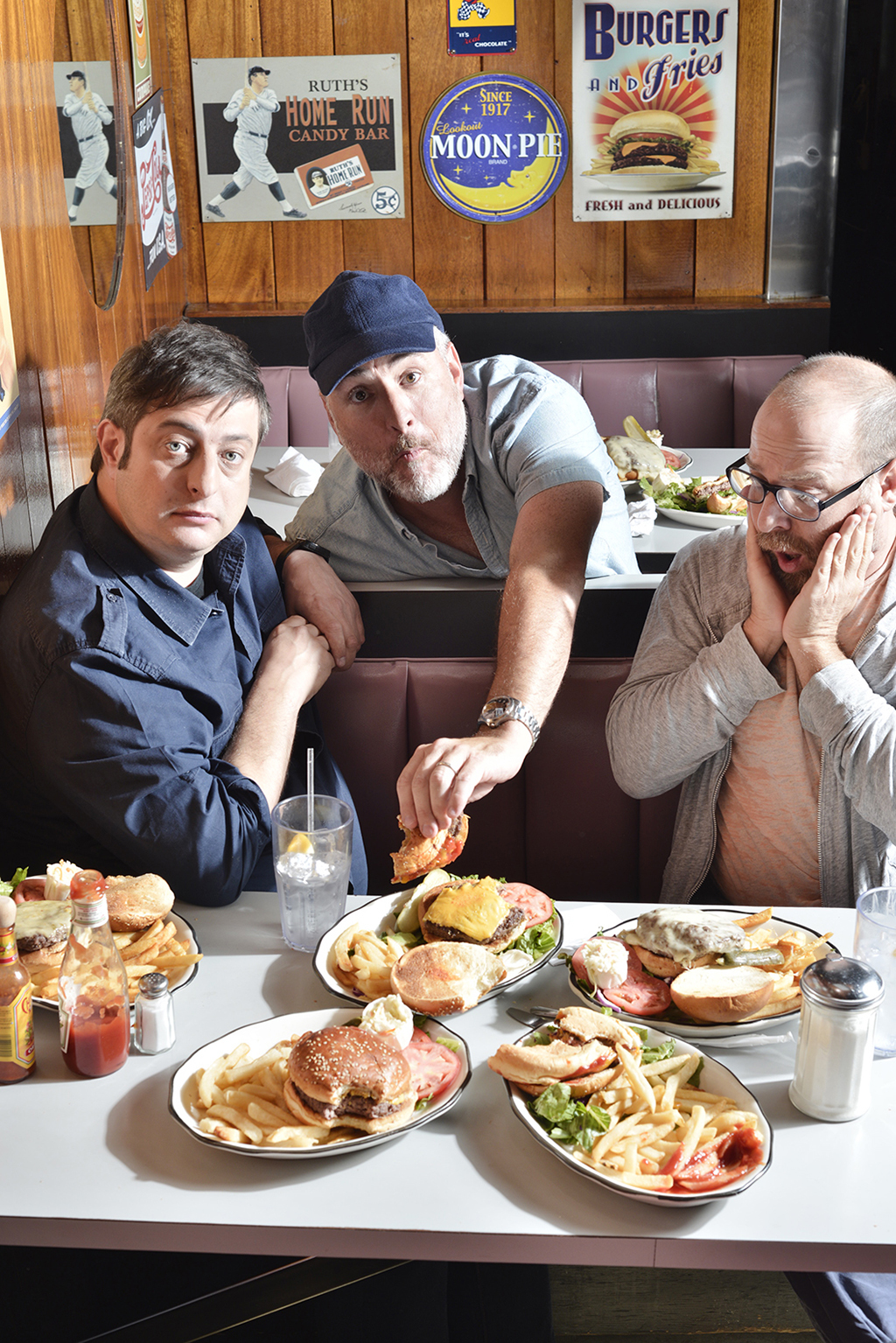 Where do you see Bob, Gene and Teddy in ten years?
Mirman: Probably on some reality competition show, becoming a darling of America.
Benjamin: That’s a very optimistic view for Gene. I don’t share that.
Mirman: He’s relentless; he won’t stop. Nothing can defeat him, other than of course illness, but who would draw in an illness?
Benjamin: Incompetent and relentless are the worst combination of qualities.
Mirman: It leads to senators!
Benjamin: He’s not the kid who’s gonna take over Bob’s Burgers.
Mirman: No, Louise will make it a small chain of very lucrative casinos.
Benjamin: Tina might be the most responsible.

I believed it was you for a second.
Mirman: No, Jesus. Gene, because he’s so amorphously sexual.
Benjamin: I think Tina’s the most unusual character to ever hit animated television.
Murphy: The audience more than met that character halfway; they’re really into it.
Mirman: I do think she’s particularly loved. She sort of conveys both warmth and anxiety.

Do you think there’ll be another Bob’s Burgers/Archer crossover?
Benjamin: Archer did it really well, and [Bob’s creator Loren Bouchard] always gets asked to answer back. He’s said he would try to hide it or obfuscate it in some way, to make it not enjoyable for fans. At Comic-Con, he said he was going to bury an episode of Archer in an entire season of Bob’s Burgers by using snippets of dialogue, like Marina Abramovic. So you could find the episode of Archer in the whole season if you took it and pieced it together. Like, “danger” and then somebody would say “zone” later, and you’d clip it together, and it’d be a whole episode.
Mirman: He did it in season two already.
Benjamin: There was an entire episode of Bones.
Mirman: A lot of people think Firefly was canceled. It’s never been canceled; it’s buried inside Bob’s Burgers.