How not to be a dick in NYC: The 91 etiquette rules every New Yorker must follow

We’re as mad as hell, and we’re not gonna take this anymore! It’s high time we all settled in for a much-needed etiquette lesson.

New York Fucking City. Not San Fucking Francisco. Not New Fucking Orleans. Not Los Fucking Angeles. Not St. Fucking Louis. There’s a reason that phrase, printed on a trillion tourist-trap T-shirts, still sticks with our fair city and ours alone. We speak our minds. We can be pretty brash if you catch us on the wrong day. We’ve become a tad shinier and nicer over the years, sure, but we’ve still got bite. In fact, we’re kind of assholes when it comes down to it—but the kind you secretly admire and love to hang out with. Time Out New York does not want to change any of that or any other qualities that give our city its teeth. But the indefensible faux pas committed by a few have reached a fever pitch and are making life here hell for the rest of us. So take this handy etiquette guide to heart, NYC. And if you don’t? GTFO. Please.

1–3. When you’re in a long line for something, know your order.
Also, stop talking on the phone while scrolling through Instagram. And when you place your order, take out those earbuds.

4. Don’t ghost.
Period. Be better than that, and hopefully people will do the same for you.

5–13. Don’t take these items on the subway under any circumstances (ever):
Bicycles, surfboards, furniture, your experimental performance-art project, your dog/cat/snake, moving boxes, that literal bowl of cereal with milk you are holding right now (OMG, we can’t even with that one).

14–15. If you pee standing up, raise the toilet seat.
And if you pee sitting down but like to hover and spray? Don’t.

16. If you drive, for the love of God, honk only when necessary.

17. Throw away your cig butts.
Despite the skyrocketing price of a pack and the smoking bans in parks, on beaches, in front of buildings and—soon enough, we’re guessing—everywhere else, puffing away may always have a certain New York cool. Know what’s not cool? Tossing your butt onto the sidewalk. It’s expensive for our city to clean itself up, and a lot of that refuse ends up in the ocean. Even if, to quote the brilliant lyrics of the Moldy Peaches, “New York City’s like a graveyard,” it certainly shouldn’t be like an ashtray. Stub out that cig and put it in the trash.—Tim Lowery

20. Hey, pedestrians: Give cars a break.
Have you ever tried driving in New York City? It’s harder than getting a table at Frenchette or talking with a Roseanne apologist. If the traffic intersection isn’t clear of cars, don’t cross against the light, and please don’t stand off the curb in a right-hand-turn lane as vehicles approach—you’re causing our fast-paced city to slow down. A study we just made up says pedestrians cause 82 percent of all car-horn noise in NYC. If you don’t want to be nicer to cars to lessen noise pollution, then do it for your own well-being: An actual, recent study by the Department of Transportation has found that more than half of NYC traffic fatalities are pedestrians.—Rocky Rakovic

21–23. Know which doors you should hold:
Elevators: Always
Revolving: Never
Subway: Rarely (it’s the nature of the beast)

28. Don’t bother celebrities
Relative anonymity is one of the reasons they dig it here.

29. Don’t use social media to shame strangers.
When we’re commuting, we’re not always our best selves. We’re anxious, stressed, hyperaware of our personal space and constantly watching our back for the unknown—all while staring down, with sunglasses on, at our phone. So, we may get weird. Sure, some of us may have to wear our Groot costume on the way to the superhero-themed party because it wouldn’t fit in a car and we can’t afford a taxi anyway. Sure, some oblivious teens may be making out in an unpleasant, sloppy fashion, but we were all young once! Our point is, please don’t document our most embarrassing moments, then throw the video up on some viral Instagram feed. Leave your fellow citizens the hell alone, and let them exist in all their idiosyncrasies. Give us the privacy we falsely believe these dark sunglasses provide.—Jillian Anthony

31–33. Bike like a mensch.
Stay on the street (not on the sidewalk), pedal in the same direction as traffic and obey all traffic rules.

34–38. Follow these bodega dos and dont's:
-Don’t be super drunk.
-Don’t open your drink before buying.
-Do be friendly.
-Don’t complain about the prices.
-Do bring cash.

39–45. At concerts:
-Break out your phone twice to take a photo, once to take a video. That’s all you get. You know damn well you’ll never watch a clip longer than 10 seconds more than once.
-Keep the chit-chat to a minimum, especially during slow numbers.
-Avoid yelling things at the band. (No one came to hear how funny you are.)
-Say “excuse me” when passing through a dense crowd.
-Move out of the way of said “excuse me” utterer, without an attitude.
-If you’re very tall, avoid the front row and ask the much-shorter people behind you whether they would like to switch spots.
-That being said, give very tall folks a break at packed shows.

46. Swipe a stranger every once in awhile on the MTA.

47–48. Help someone with a stroller go up or down the subway stairs.
But be sure to ask before you grab.

50. Realize the city is not your personal Instagram studio and act accordingly.

51–56. When you walk on the street.
-Stay to the right, always.
-Don’t stop abruptly to text, smoke, look around, whatever (chances are, someone is right behind you).
-Put the damn phone away.
-Keep groups to a max width of two people.

57–58. If you‘re going to hookup or indulge in party favors in the bar or club bathroom (no judgements):
-Keep the session to five minutes or less.
-Don’t let your friends join you by cutting in line in front of a bunch of people.

59. Realize water fountains are for human mouths, not those of pets.

60–69. Act like an adult at the theater by following these 10 simple steps.

70. Come 7pm, know that your dog should no longer be at the bar.

71–74. Don't party at the beach like an asshole.
In other words, keep the music,  swearing, drug intake and boozing at a reasonable level.

75–80. Always give your seat up for:
-The pregnant
-The elderly
-The disabled
-People with children
-Children with children
-Someone who looks like they’re having a really shitty day

81–82. Know you’re in a shared space:
- During, say, happy hour, don’t take over a whole table when you don’t need it.
- Hang up your bag and coat in an appropriate place, not sprawling across the two seats next to you.

84. Don‘t pay to skip to your song on the jukebox.
Also, if you have to play a super-long, good-bang-for-your-buck track, be a real New Yorker and opt for Television’s “Marquee Moon.”

85. Don’t have awkward, incriminating or sexual conversations in front of your cabbie or ride-share driver.
They’re humans—with ears. Treat them that way.

86–90. Follow this basic umbrella etiquette:
- The space you take up on the sidewalk has now quadrupled. Act accordingly.
- Move your umbrella up, right or left when passing others.
- Close your umbrella beneath covered walkways and when it stops raining. (We shouldn’t have to say this, and yet…)
- Close your umbrella before you enter the subway stairwell, and don’t you dare open it up again till you’re completely clear on your way out.
- Don’t be afraid to get a little wet. A couple of thousand fewer menacing umbrellas on the streets would do us all some good.

91. We’re embarrassed we have to point this out, but look all servers in the eye and say “please” and “thank you.” 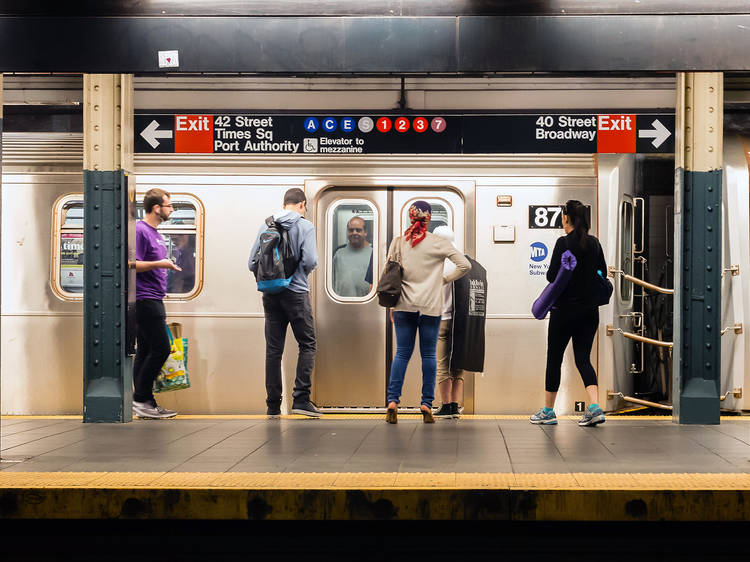 Check out 18 New York hacks to make your life easier

These brilliant shortcuts, hush-hush deals and insider tips will help you navigate NYC smarter and faster