Take a class on Britney Spears’s life and legacy

Rachel Goldberg’s first memory of Britney Spears is hearing “...Baby One More Time” (one of the best karaoke songs ever) on the radio in fourth grade. She instantly fell in love, and Spears’s music and life’s journey have been an integral part of Goldberg’s personal passions ever since. She and fellow Brit-Brit obsessive Suri Ratnatunga decided to take their fascination with Spears to the next level by teaching a class called "Britney 101: From Humble Beginnings to Pop Icon." Goldberg gave us an overview of one of the coolest classes in NYC, taught for groups of 10 from her Greenpoint apartment, and explained why Britney matters from a feminist perspective.

What exactly does your Britney Spears class cover?
We overview her career from the beginning to where she is now and go over what critics might say, which is anyone from a pop critic to someone at a party—things like how her singing voice is bad or she’s not really writing her songs or how can she be a feminist if she’s so sexualized. We have a lot of GIFs. She had a minidoc that came out before her Piece of Me tour, which is what she’s doing in Vegas now, so we show a clip of that. We also play a video of Justin [Timberlake] and Britney throughout the years. It’s a really funny fan video set to this extremely sappy music with Comic Sans over it—it’s disturbingly 12 minutes long. And we show the paparazzi following her around and when she shaved her head.

How did you and Suri come up with this brilliant idea?
Suri and I work at SideTour [a website for booking unique things to do], and that’s how we met. One day, Britney came up, and Suri said, “I know everything about her,” and I was like, “No, I do.” Then we realized we both know everything about her. It’s pretty rare to meet someone who knows Britney’s entire discography and isn’t embarrassed. We set up brackets after work and put all 32 of her singles head-to-head and had intellectual arguments about which is best; we felt like we were doing this really deep analysis, and everyone in the office was laughing. We’re both really into women’s rights and feminism, and Britney made us think deeper about those issues. We thought there might be other people like us.

What kind of crowd do you get?
A lot of women and gay men. Three guys who showed up at the first class met online at a Britney Spears forum. One guy paid $2,500 to meet her for 10 seconds.

What kinds of snacks do you serve your students?
There’s “Don’t let me be the last to nachos,” “Baby hit me one more thyme” cheese and crackers, “Gimme s’mores” and “Hold it against meat,” a vegetarian option. We serve beer and hard liquor, included in the ticket price.

Why does Britney matter in pop culture?
She’s the one person I would look to in pop culture who really inspired me. I think there are a lot of intellectual ways you can look at the agency in her career. With her life in particular, there’s a lot you can dissect that resonates with the feminist movement.

How do you cover the infamous head-shaving incident?
We have a video showing the paparazzi following her around and her head shaving and another video of her commenting on that. We go over her breakdown and also just the concept of craziness. We trace the word hysteria, which comes from the Greek word hystera, which means “uterus.” Being crazy is historically a female problem. [Britney] represented the hysterical woman. When you look at the evolution in her career, she owns her craziness; in “Womanizer,” she says, “You say I’m crazy, I got your crazy.”

What’s something we don’t know about Britney?
The “...Baby One More Time” video concept is something she came up with. And it’s one of the most iconic videos of all time, and she was 16. It plays on this Madonna/whore complex you’ll talk about in any gender studies 101 class. Women are put in this box where they have to be virginal or oversexualized, and I think Britney decided right away she was going to play off of that. It flies in the face of that contrast women are put through.

So what can Britney fans say to people that claim she has a bad voice?
I play a clip of her live performances that I think debunks that. It’s sort of a moot point, because she’s not a blues singer—she’s a pop performer and artist. Pop music is not about your live vocals. You don’t go to her concert for singing; you go because she epitomizes pop and you know you’re going to dance and have a good time. There was Jessica Simpson and Mandy Moore, and she’s the only one that’s still around. 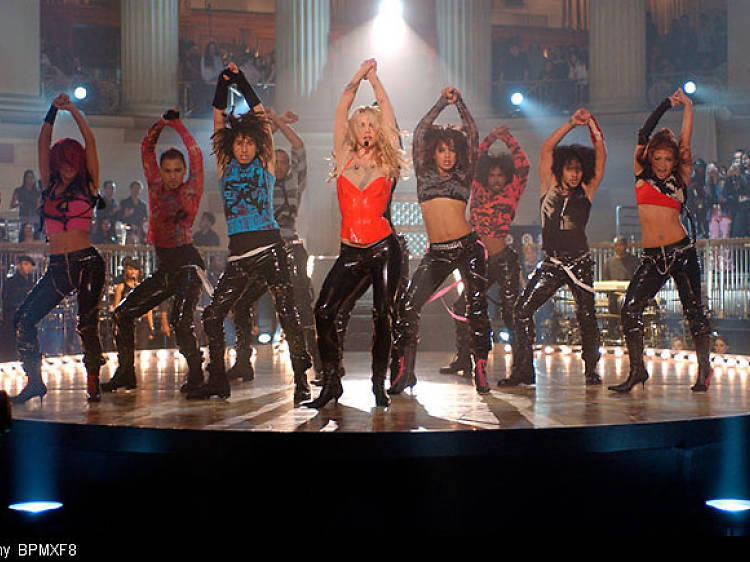 Remember the reign of Britney Spears? Well, for a lot of us, the Princess of Pop never left the throne. Join Spears scholars (yes, that's a thing) Rachel Goldberg and Suri Ratnatunga for a class on how to be more like Britney, with explanations of the journey, effects and true meaning of Spears's fame.