The 10 best food markets in Paris

Stock up the fridge with fresh, local produce from one of these brilliant food markets in Paris (and linger for the lush smells)

Tokyo may have more Michelin stars, but if you had to crown one city ‘world food capital’, wouldn’t it be Paris? A quick whizz round these thriving local produce markets should win over even the most sceptical of gourmets. From a refined foodie hotspot in the Marais to the fruit and veg stands that sprawl out from Bastille to a wholesale mecca on the city’s outskirts, the best food markets in Paris will make you hungry long before you’re back in the kitchen.

Still not convinced of this city’s gastronomic pre-eminence? Try one of its marvellous brunches, go croissant crazy or simply head out on a food tour – you’ll be swayed in no time.

RECOMMENDED: Full guide to the best shops in Paris 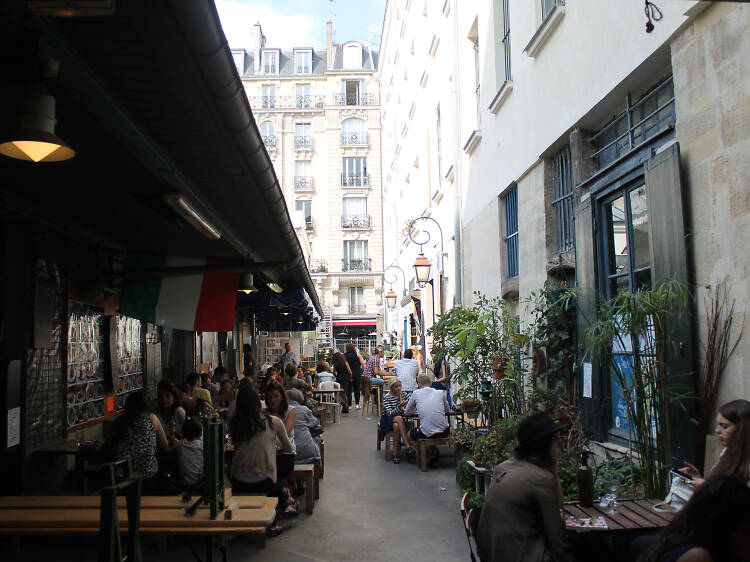 This historic market takes its name from the 16th-century orphanage that used to occupy the site; the red of the children’s clothes indicated they had been donated by Christian charities. Although the orphanage closed before the revolution, the imposing wooden edifice survived and was reopened as a deluxe food market in 2000 after extensive campaigning from locals. Now something of a tourist hotspot, the market also boasts a handful of first-rate restaurants. 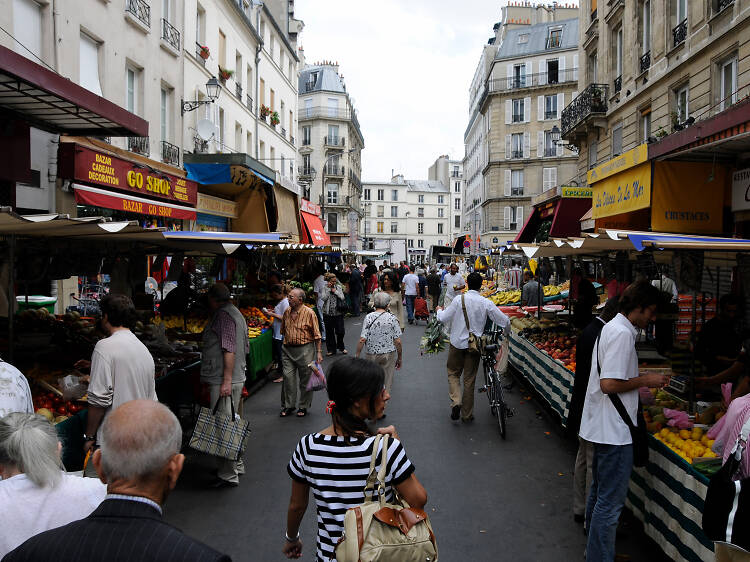 One of the oldest markets in Paris, the Marché d’Aligre survived the turbulence of 1789 and 1871, and continues to ply its second-hand clothes, bric-à-brac and cheap food as if the city around it hasn’t changed one bit. Your experience of the market depends largely on where you go: the top of the street is where to head for seasonal fruit and veg (€1-€3/kg), while a detour through the covered Beauvau market will take you through the pricier fishmongers’ and butchers’ stalls. Don’t miss the motley collection of books, African masks and other trinkets that line the stands in the main yard. 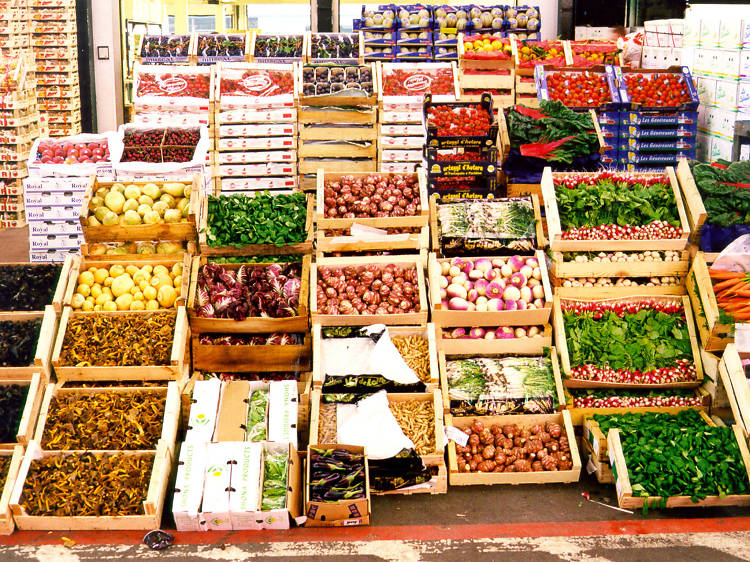 The Marché International de Rungis is the largest wholesale food market in the world. Spanning 232 hectares, this monster marché caters to pretty much every culinary need (and is, unsurprisingly, the go-to supply spot for many a Parisian chef). Set up in the city centre in the 10th century, Rungis relocated further out of town in 1969 because demand on suppliers was so high. The current site, in the southern suburbs, is easily accessible by train and car. 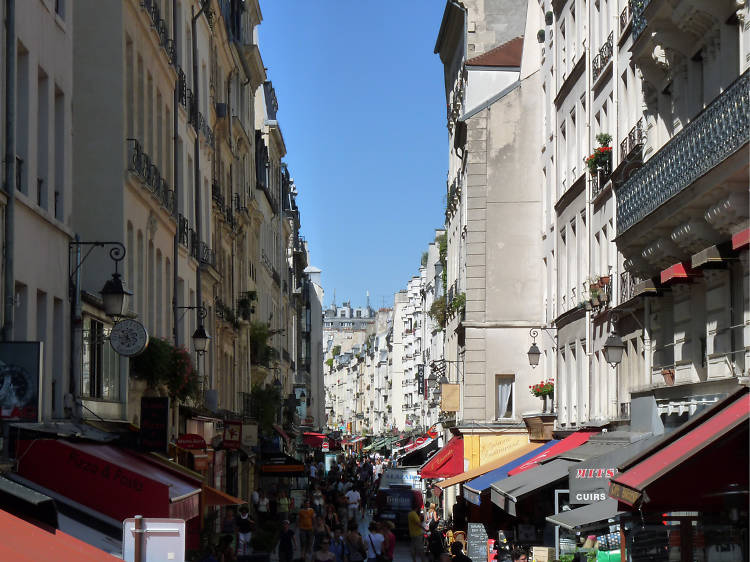 Half market, half heavenly food shop strip, the pedestrianised Rue Montorgueil heaves with flower vendors, rôtisseries, alluring bakeries and fragrant cheese shops. As you browse your way along, you might stop in for a hot chocolate at Charles Chocolatier, a pastry at Stohrer (the oldest pâtisserie in Paris, with a particularly beautiful ceiling), some strawberries from the fruit and veg stalls, shellfish from the fishmonger, and artisanal cider from a booze shop. Good thing there are plenty of tempting cafés for regular pit stops. 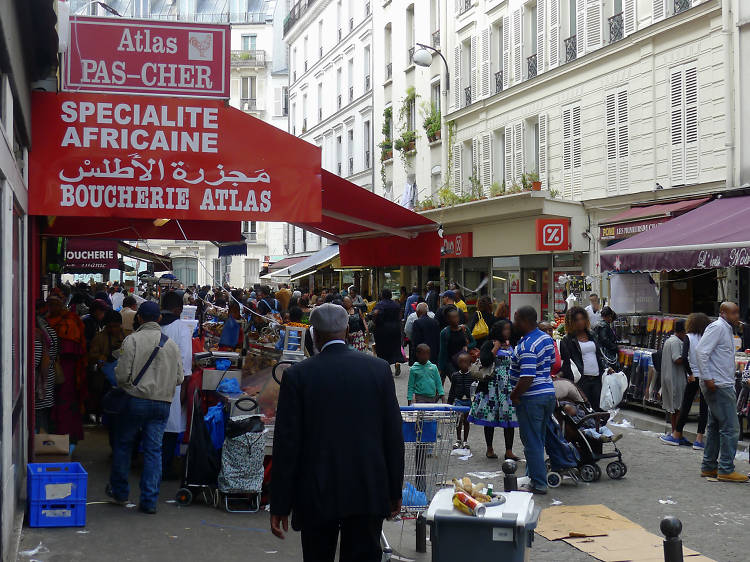 In the Goutte d’Or area of the 18th arrondissement, the Marché Dejean is the place to go for tilapia and manioc, or just to get a flavour of the West African community in Paris. Food stalls, halal butchers, cosmetics parlours and cafés are crowded into the small pedestrianised street – filling it with exotic smells and colours. 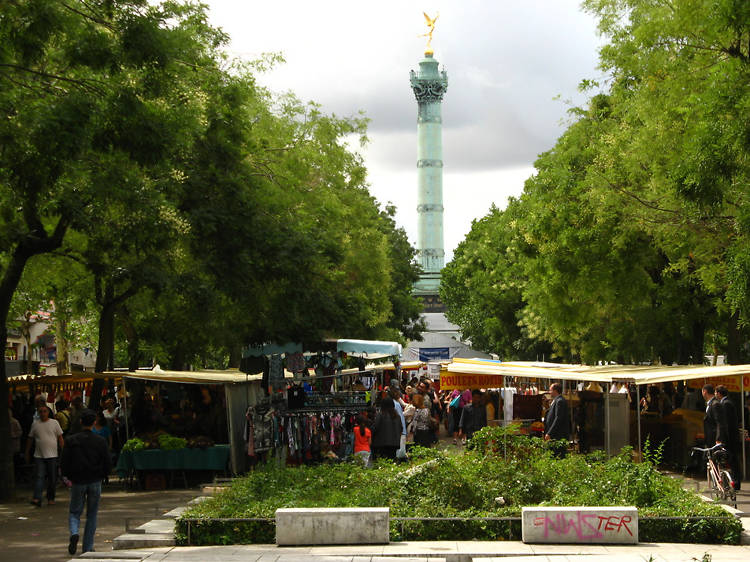 The Marché Bastille’s food stalls sprawl up the Boulevard Richard-Lenoir twice a week, with more produce than most hypermarkets – it’s a particularly great source of local cheeses, free range chicken and high-quality fish. The photo-worthy piles of fruit, veg, saucisses, olives and so on are interspersed with stalls offering African batiks, cheap jewellery and bags, but that doesn’t detract from the overall sense of bountiful goodness. 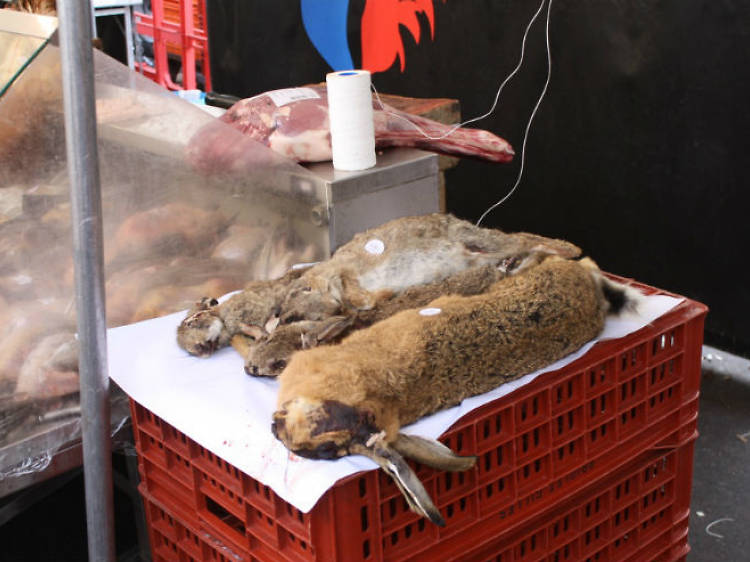 Running the length of Avenue Président-Wilson, this open-air foodie paradise may well be the largest of its kind. Highlights include Joel Thiébault’s long-established grocery stall, packed with obscure fruit and roots; JPB fishmongers for ultra-fresh seafood; and Maison Priolet for game and poultry. It’s a proper window into Parisian gastronomy – tongues, tripe and all. And there’s a decent range of hot food, too: Thai, Chinese, Lebanese, Breton-style crêpes, Alsatian choucroute, boeuf bourguignon, paella, pâté and rotisserie chicken. Do several laps of the eye-popping selection before you make up your mind. 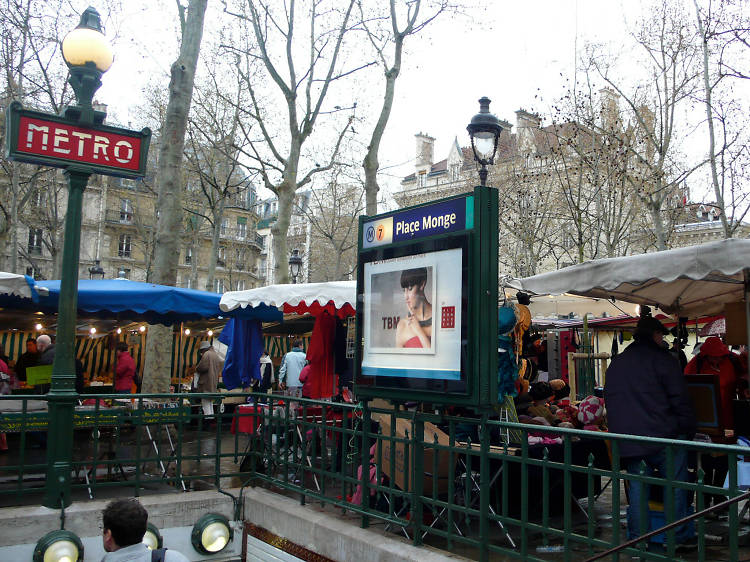 The leafy square and quiet fountain of Place Monge provide the setting for this charming if pricey food market, a calm alternative to the tourist bustle of the nearby Rue Mouffetard. The stallholders take pride in their products: the beekeeper will turn up in person to sell his honey, while the fishmonger will tell you about how he gets his fish straight from the Normandy coast. Bear in mind that prices can run high in this rather affluent corner of the Latin Quarter; still, in this picturesque little square, you get what you pay for. 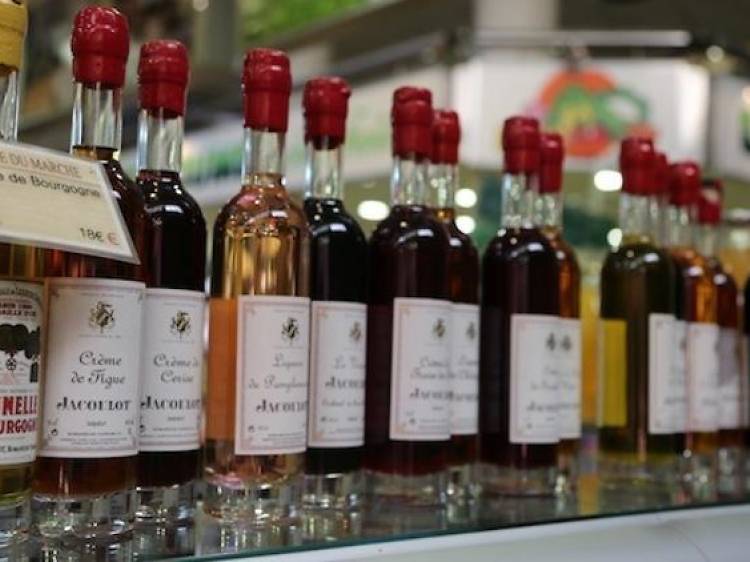 This covered market is small, modern, well thought-out – and in places rather eccentric. Each stallholder enforces a high level of quality control to bring you the very best products, whether cheese, meats, flowers or spices. Explore a bit and you’ll begin to uncover the most interesting bits, such as the German grocers Der Tante Emma-Laden, whose vast range of beer, smoked ham and chocolate is worth the trip in itself. Come with a full wallet, and be prepared to get distracted at every corner. 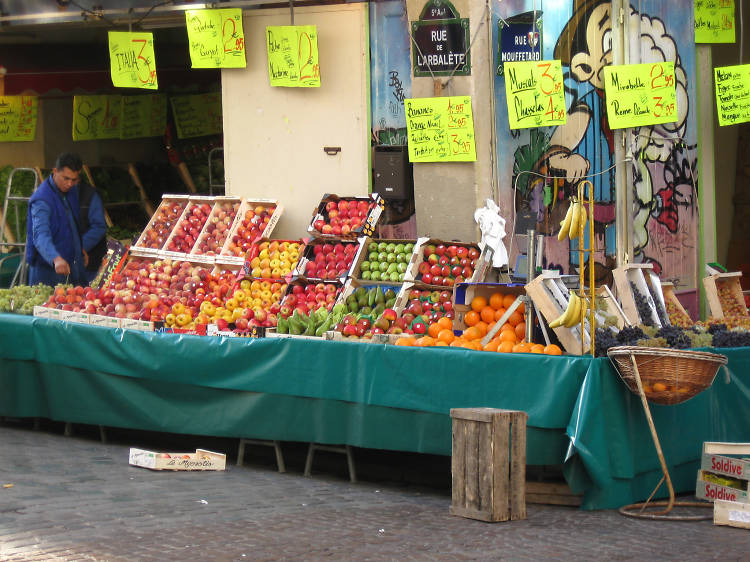 This ‘wonderful, narrow, crowded market street’, as Hemingway described it in ‘A Moveable Feast’, still sports bright and bustling stalls of fruit and veg in its cobbled lower stretches (its upper extremities largely harbour student bars and tourist shops) – its quaint buildings making it one of the city’s most atmospheric street markets. Many grocers, which also hawk charcuterie, pâtés, seafood, cheese and sticky pastries, only select organic and fair-trade goods. On Wednesday, Friday and Sunday mornings, Mouffetard’s stalls run into the Marché Monge (on Place Monge), renowned for yet more excellent food, especially fresh bread. 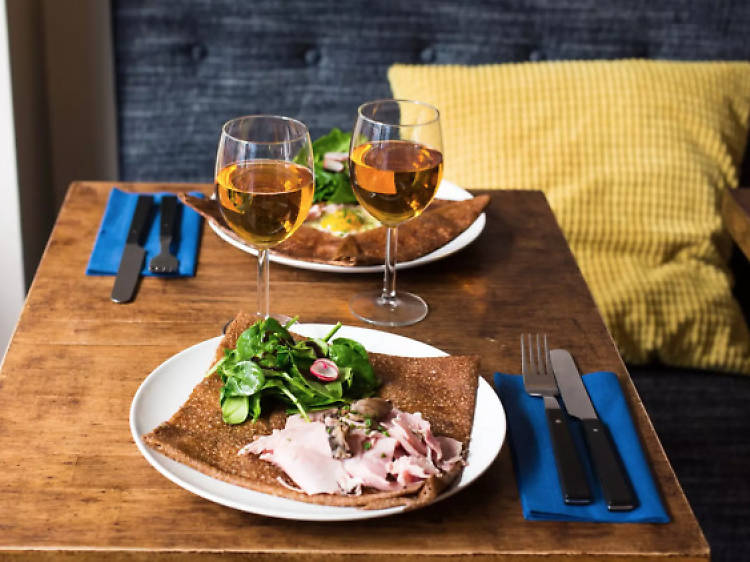 You could just plump for a €4 ham and cheese number from one of those ever-present street-side Champs-Elysées vendors. But to be quite honest, it won’t be any good. For the real pancake deal, you’ve got to head to one of the best Breton crêperies in Paris (and they’re legion). These are our favourites.