The 15 best things to do in Chinatown, San Francisco

Explore the best things to do in San Francisco's Chinatown, from delicious food to amazing art and much more

One of the oldest and most established Chinatowns in the United States, Chinatown San Francisco boasts some of the city's best dim sum restaurants, galleries, tea shops and karaoke bars. From the Dragon Gate to China Live, Chinatown is a bustling neighborhood with shops, boba spots and restaurants galore. Not to mention, it's also one of the most walkable neighborhoods in a city filled with hills. Starting in late 2019, the neighborhood will also be graced with the Central Subway line, a brand new Muni route that will run from the Caltrain station in SoMa to Chinatown’s 4th and King streets. It’s worth spending an afternoon wandering through Chinatown, San Francisco's colorful alleyways, treasure-packed shops, and vibrant markets.

How do I get to Chinatown, SF?

What are the most popular attractions in Chinatown, SF?

San Francisco’s Chinatown contains the largest Chinese population outside of Asia. As a result, the culture is robust, from arts organizations like the Chinese Cultural Center to the annual Chinese New Year festival every February. China Live, a two-story marketplace, retail space, food demonstration hall, and high-end bar and restaurant, is a must-see, as are the neighborhood’s quirkier, divier watering holes, like Buddha Lounge and Li Po Cocktail Lounge. Grant Avenue, the neighborhood’s main thoroughfare, is dotted with shops, bakeries, and grocers.

The tiny, 450-square-foot Et. Al Gallery (620 Kearny St) resides in the basement of a dry cleaner. No, really. You have to pass through Union Cleaners and head down a flight of stairs to find it. It opened in 2013, representing local artists and hosting monthly exhibitions, and though it’s since expanded to a second location in the Mission, the original Chinatown space retains the same arty, edgy soul. 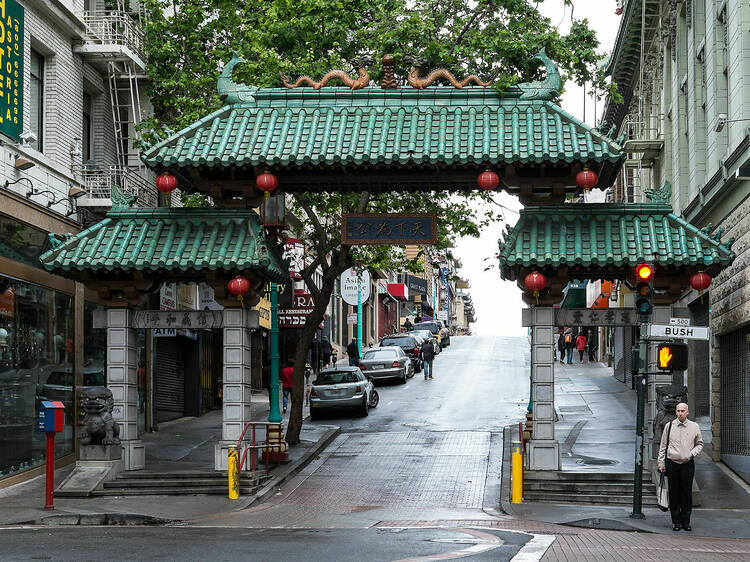 In 1970, Chinese-American architect Clayton Lee designed and erected this postcard-famous gate, which sits at the southern end of Chinatown along Grant Avenue. It’s a natural jumping-off point for exploring the neighborhood. With its stone pillars, green-tiled pagodas, and dragon sculptures, this gate is the only authentic Chinatown gate in the country. The three entryways are guarded by a trio of stone lion statues, said to ward off evil. Each passage has a sign hanging over it written in Chinese. The center one reads: “All under heaven is for the good of the people”; the right and left signs read “respect; love” and “trust; peace.” 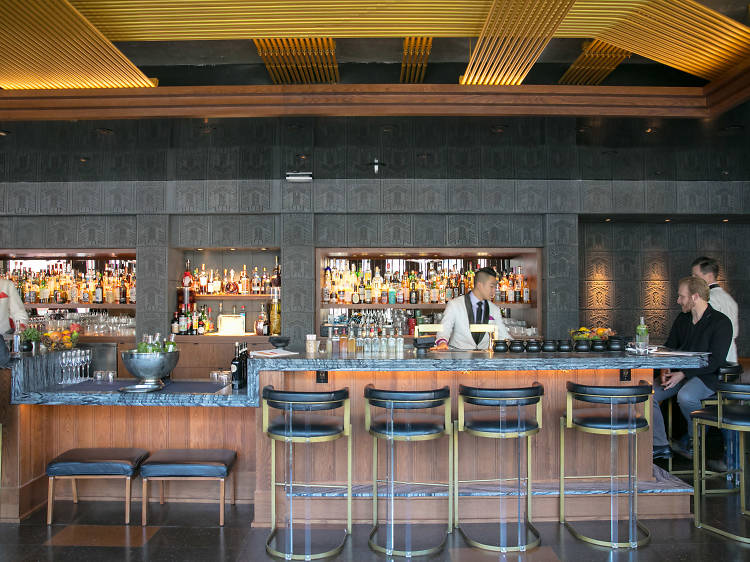 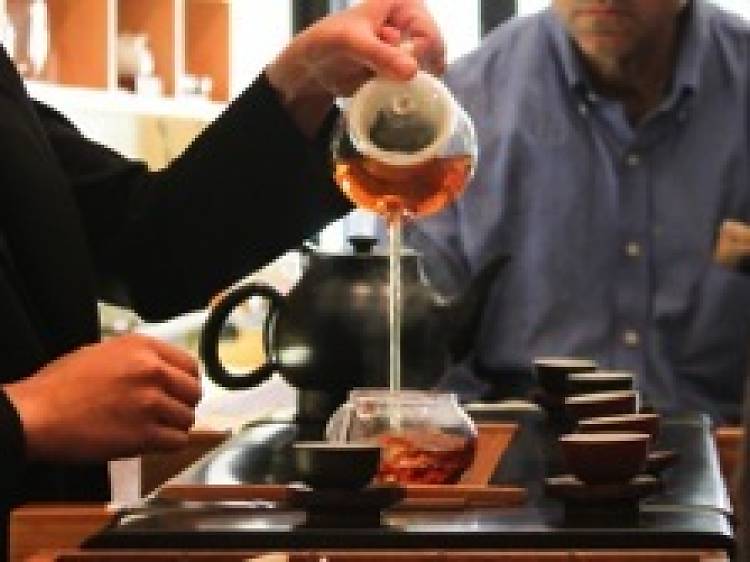 This family-owned teahouse is a Chinatown standby, serving rare teas from China and Taiwan. Each year, the owners take a sourcing trip through the provinces, collecting new varieties of black, white, herbal, flowering and rare teas, such as an aged orchid from the Guangdong Province. The narrow store includes two small tables for tastings, where the knowledgeable staff lecture on the loose leaves' origin, harvest and preparation. 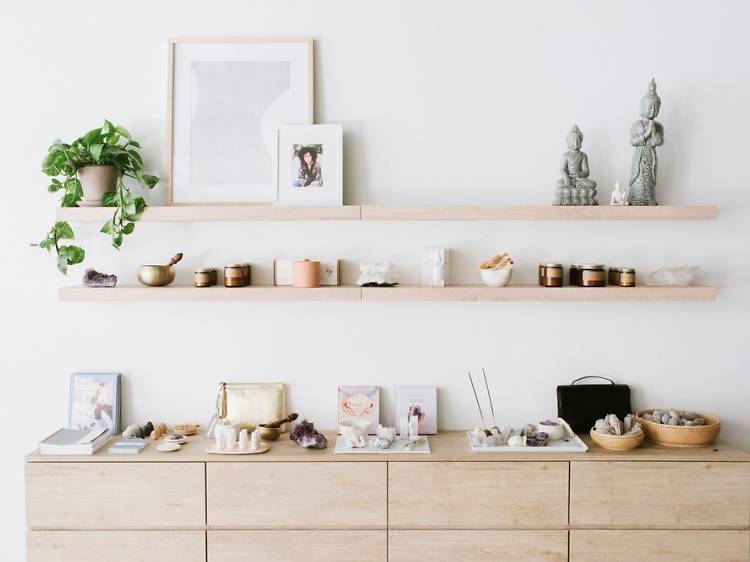 Sisters Renee and Tiffany Tam opened this airy, modern boutique in spring 2018. The pair grew up working in their family’s store nearby and they branched off on their own to pursue a shared passion: handcrafted silk and charmeuse kimonos. The vivid robes are adorned with birds and blooming botanical prints, each sketched and painted by hand. Though they’re created using age-old techniques, the kimonos have become popular contemporary layering pieces. 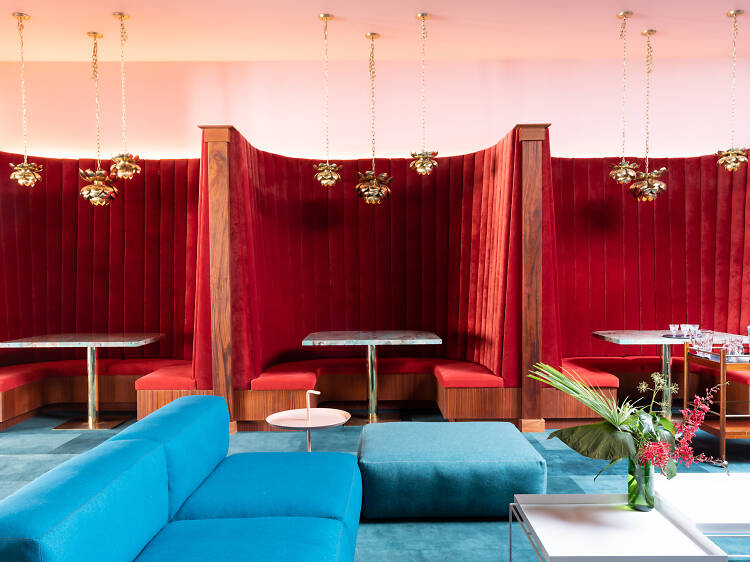 The team behind the Michelin-starred Mr. Jui’s opened this upstairs lounge that drips with midcentury elegance, so you can snuggle into a red-velvet booth under lotus-shaped brass lamps. The extensive cocktail list includes seasonal offerings and signature drinks, which are based on the Chinese lunar calendar and spiked with black garlic, plum, oolong and other Eastern ingredients. 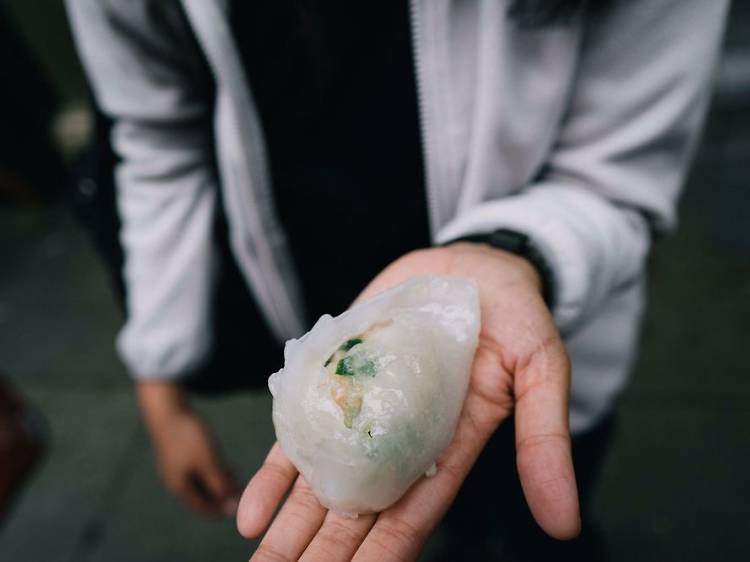 On any given day in Chinatown’s Portsmouth Square, you’ll see locals perched on benches, shoveling dumplings into their mouths from steaming containers. It’s likely they got them at Good Mong Kok, a tiny bakery nearby. There’s no indoor seating here, so follow the system in place: Wait at the entrance until you’re beckoned inside by the fast-moving servers at the counter. You’ll find well-executed delicacies like melt-in-your-mouth shrimp har gow, flavorful pork shumai, and sizable baked and steamed barbecue pork buns. For dessert, opt for the custard-filled pineapple bun. 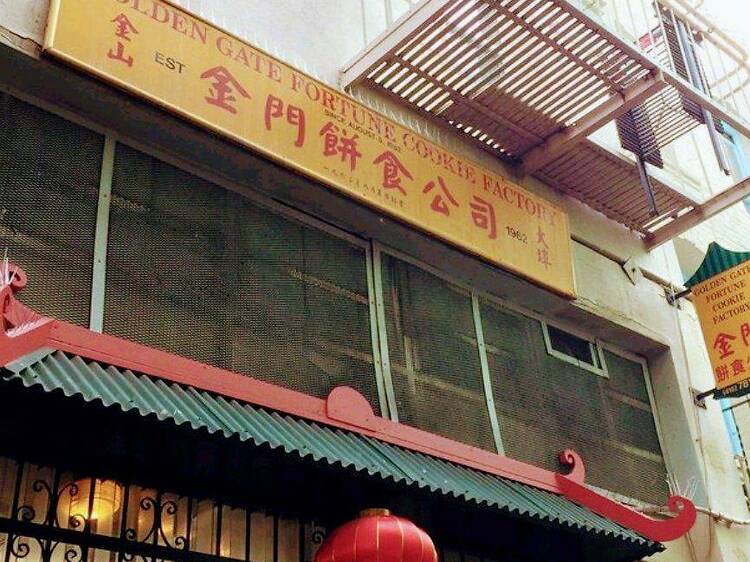 Veer down Ross Alley and look for the red lanterns hanging out front to find the unassuming Golden Gate Fortune Cookie Factory, which has been in existence since 1962. Though tiny—the entire operation consists of a handful of workers hunched over conveyor belts, folding messages into cookies by hand—it’s mighty: the factory cranks out around 20,000 cookies a day, supplying perfectly crackly after-dinner treats to hundreds of local restaurants. Watch the golden fortune cookie wafers coming off the machine, pancake-like, before being bent into their traditional shape. (The women working will even let you sample a freebie, hot off the griddle.) The front end of the sparse space is lined with various varieties of fortune cookies that are available for purchase: green tea, strawberry, chocolate-coated, sprinkle-covered, and R-rated. You can even personalize your own fortune, to be tucked into a fresh cookie for $1 apiece.

Chinatown has no shortage of storied dive bars (RIP, Mr. Bing’s), but Buddha Lounge strikes just the right kitschy-cool vibe, with its red lanterns, icicle lights, and wall-spanning mural. You’re as likely to find regulars at the narrow, cash-only bar as tourists, a rarity for this heavily-trafficked strip of Grant Avenue. It’s beloved for its well-stocked jukebox, strong drinks, and generous bartenders. The lounge has two specialties: Buddha beer, served in a green glass bottle shaped like a buddha, and the Chinese Mai Tai. The secret ingredient? A splash of Three Penis Whiskey, imported from China. The bartender will likely challenge you to a friendly game of Liar’s Dice.

The Wok Shop has been in existence for nearly 50 years, stocking all manner of Chinese cookware for professionals and home cooks alike. Proprietor Tane Chan started out stocking a selection of woks in 1972, bolstered by Nixon’s trip to China that year. She’s since expanded to offer utensils, cleavers, hot pots, rice cookers, sake sets, steamer baskets, and much, much more. Still, the gleaming stacks of woks remain the main attraction. Stop by on Wednesday night for Wok Wednesdays, a weekly cooking class for those looking to hone their stir-fry skills. 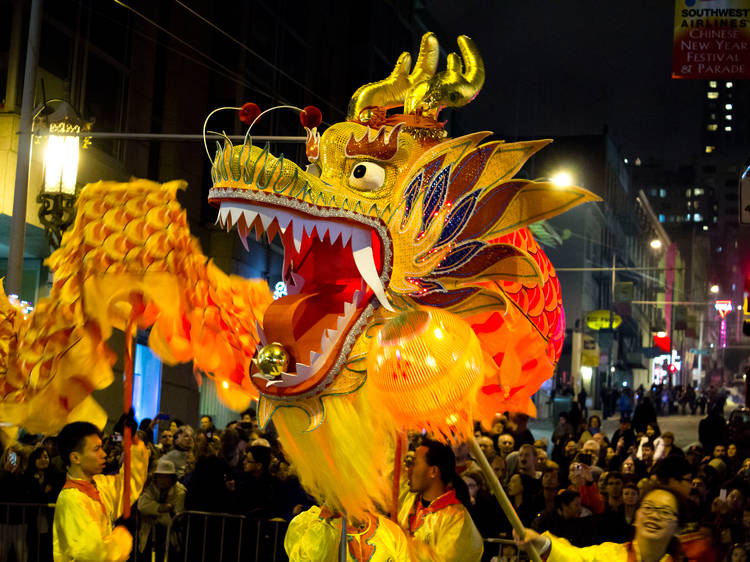 Since 1965, this center has been devoted to sharing the culture of Chinatown through public art. The CCC manages two galleries and puts on three music festivals a year. The main gallery location is on the third floor of the Hilton Hotel, where rotating exhibits feature well-known and emerging contemporary artists. In addition to its galleries and street art installations, the center organizes regular walking tours through Chinatown ($40 for 3 hours). The insider’s trek includes visits to the oldest Taoist temple in the country, an herbal pharmacy, and more. It concludes with lunch at a local dim sum restaurant. 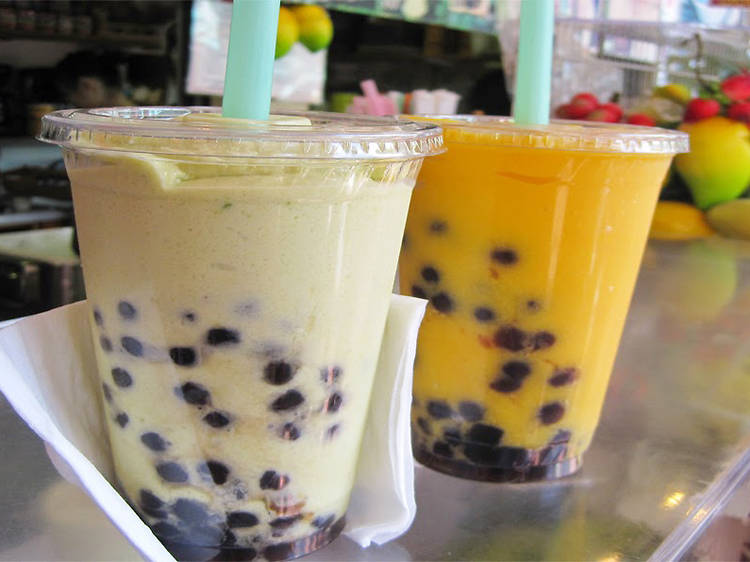 Plentea has earned a devout following for its wide range of bubble teas, served in reusable glass jars. The sweet ice milk teas are particularly popular, as are the sea salt cremas. Each can be topped with jelly, pudding, aloe, or the house-made honey tapioca.

Originally constructed in 1854, this Gothic revival Catholic church is the oldest cathedral in the state. All the bricks were imported from China. It’s perhaps best known for the distinctive clock on its tower, where these words are printed in gold: "Son, observe the time and fly from evil." Just across the street from the church, you’ll find St. Mary’s Square, which underwent a renovation and expansion in 2017. The public park now includes a 6,000-square-foot rooftop area atop 500 Pine Street, which includes a landscaped seating area and open plaza. 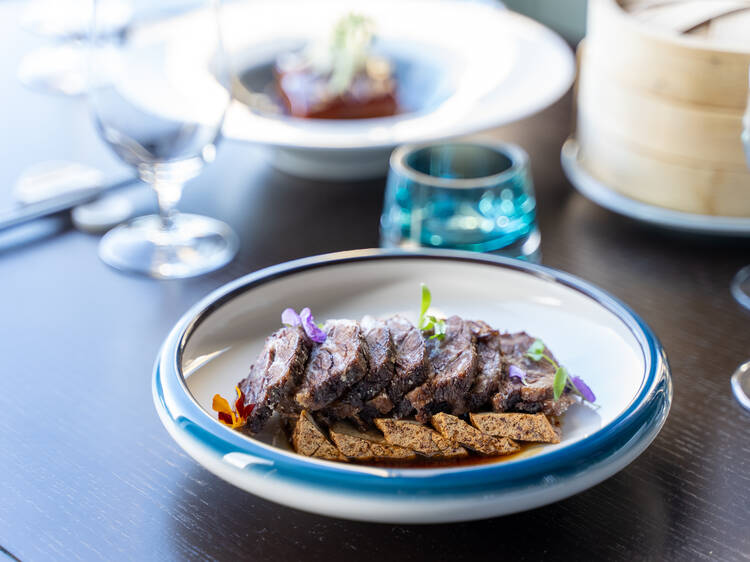 Empress by Boon—from Malaysia-born Michelin-starred Chef Ho Chee Boon—is one of the most exciting restaurants to open in San Francisco recently. The restaurant opened its doors in June 2021, debuting a fully restored interior (inside the former space of Empress of China, an iconic Cantonese banquet hall in the heart of Chinatown that operated for roughly 50 years) that modernizes the space while keeping some of its original woodwork. Chef Ho, a Michelin-starred chef with experience at restaurants around the world (including Hakkasan), presents a prix fixe menu at a startingly reasonable rate of $78, as well as a separate small bites menu that’s served in a trendy bar area. The menu focuses on modern takes on traditional Cantonese fare prepared with local ingredients, many from the restaurant’s own organic farm in Gilroy, California. 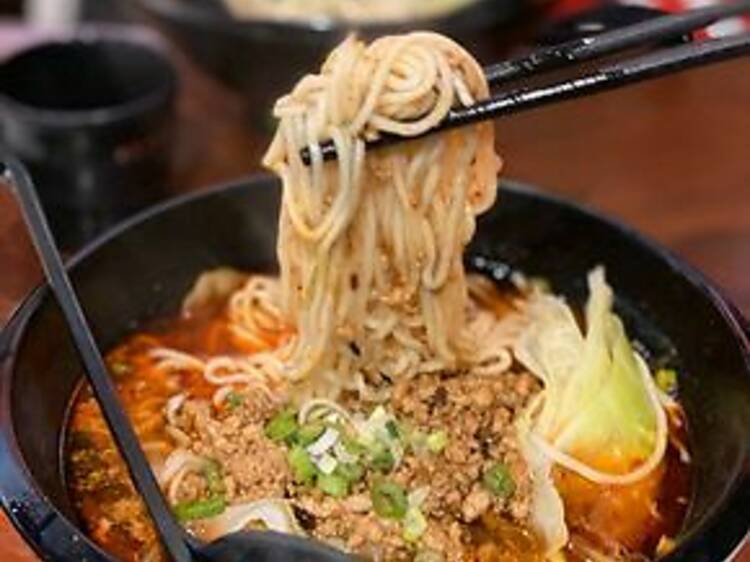 This Sichuan-style restaurant opened with an emphasis on noodles by ex-employees of Sichuan favorite Z&Y. Engulf your taste buds in richly flavorful, tingly sauces over springy noodles topped with a variety of meats. The Tan Tan noodles here are a great option, and the house cold noodles with Sichuan peppercorn rarely miss the mark. For those who aren’t spice lovers, the Tan Tan noodles can be made non-spicy, or opt for the pork bone broth noodle soup. There are also an array of side dishes that aren’t to be missed including the sliced pork belly with spicy garlic sauce and couple’s delight, a combination of tripe and beef. Service is quick here, portions are large, and prices are very affordable.