Find the best restaurants, bars, shops and things to do in downtown San Francisco with our insider’s guide to the area

Downtown San Francisco is easy to get to: Most all the MUNI trains and buses converge on Market Street, the city’s main artery. Jump off at Montgomery or Embarcadero to explore this bustling business district, where galleries, restaurants, bars, and stores are interspersed with office buildings. There’s plenty of history to be found, from Tadich Grill, the oldest continuously operating restaurant in San Francisco, to Specs, a knickknack-filled dive bar that’s maintained its oddball charm for 50 years. But there are also modern destinations for the social media savvy, from the inaugural Museum of Ice Cream to Autodesk’s gallery of larger-than-life 3D design.

How do I get to downtown, SF?

Take BART or any MUNI train (J, K, L, M, N, or T) to the Montgomery or Embarcadero stop.

What are the most popular attractions in downtown, SF?

Downtown San Francisco is bordered by SoMa—the city’s tech hub—Chinatown (the largest Chinese enclave outside of Asia), and the Union Square shopping district. The downtown area is also referred to as FiDi, short for the financial district, since many offices are clustered in the neighborhood. That also means a bevy of Michelin-starred restaurants, impressive architecture, and cocktail-slinging happy hour bars. You’ll find a hidden-gem fortune cookie factory, a museum devoted to the sweet art of ice cream, and a beloved literary relic from the Beat era.

With its distinctive pointed shape, the Transamerica Pyramid (600 Montgomery St at Clay St) may be the most recognizable building in San Francisco, The 48-story skyscraper was designed by architect William Pereira in the ‘70s—its facade is coated in crushed quartz and the spire is layered in aluminum. On certain holidays, the top of the pyramid, nicknamed the “Crown Jewel,”  lights up like a beacon. Though you can’t go up into the tower anymore—access was restricted in the ‘90s—there’s history to be found around its base: Look for plaques commemorating the whaling ship Niantic, whose hull lies just below the building, as well as Bummer and Lazarus, two local, storied stray dogs known for their rat-killing prowess in the 1860s (and unusual canine friendship).

RECOMMENDED: 41 best things to do in San Francisco

Things to do in downtown San Francisco 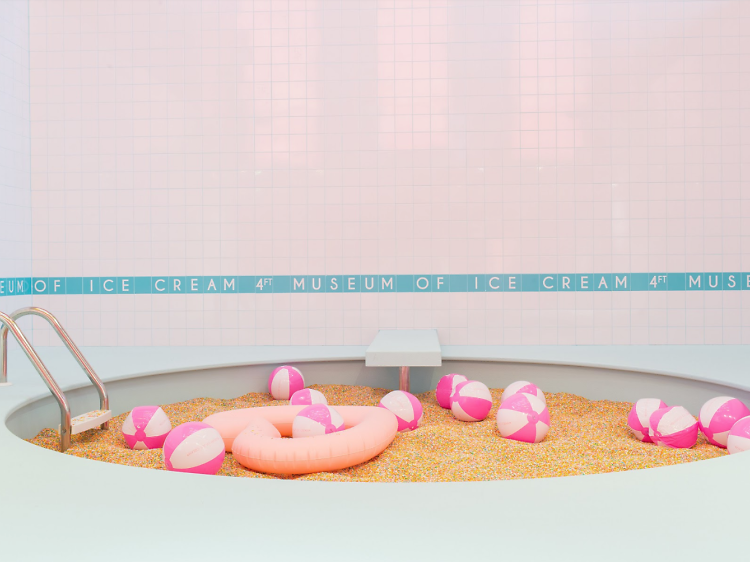 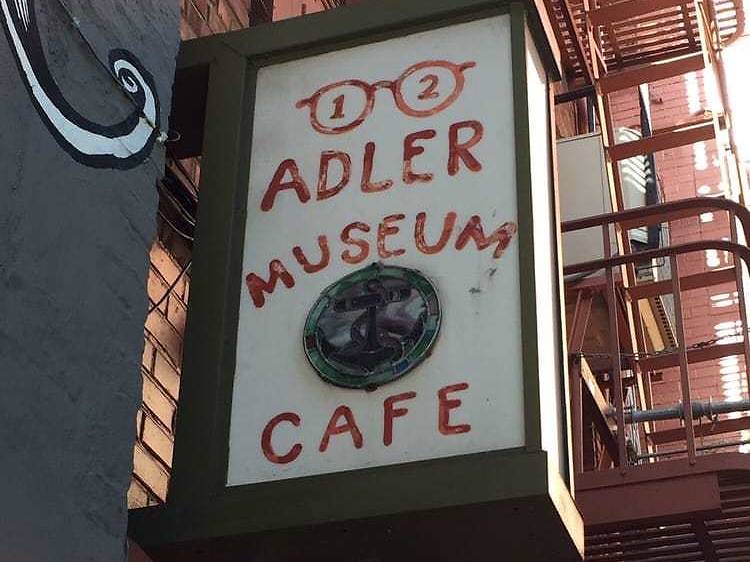 Of all the many Downtown San Francisco bars, there’s none quite like Spec’s. Richard “Specs” Simmons opened this eccentric dive bar 50 years ago, an unpretentious hang for locals, hippies, and aging beat writers. Though Specs himself passed away in 2016, his vision lives on—the bar was deemed a “legacy business” the same year. Tucked into an alleyway between Tosca Cafe and Devil’s Acre, the spot feels like a throwback to another era; there’s no TV or WiFi to speak of. Instead, regulars chat over endless cans of icy Olympia beer and heaping baskets of cheese and saltines. The red-lit bar’s full name—Specs’ Twelve Adler Museum Cafe—refers to its grandma’s-attic-style decor, which ranges from nautical kitsch and questionable knicknacks to antique photographs, maps, political pamphlets, taxidermy, and cocktail napkin illustrations. You may pass a giant Alaskan king crab, a petrified whale penis, and a mummy in the short distance to the restroom. It’s all part of Specs’ oddball, old-school charm. 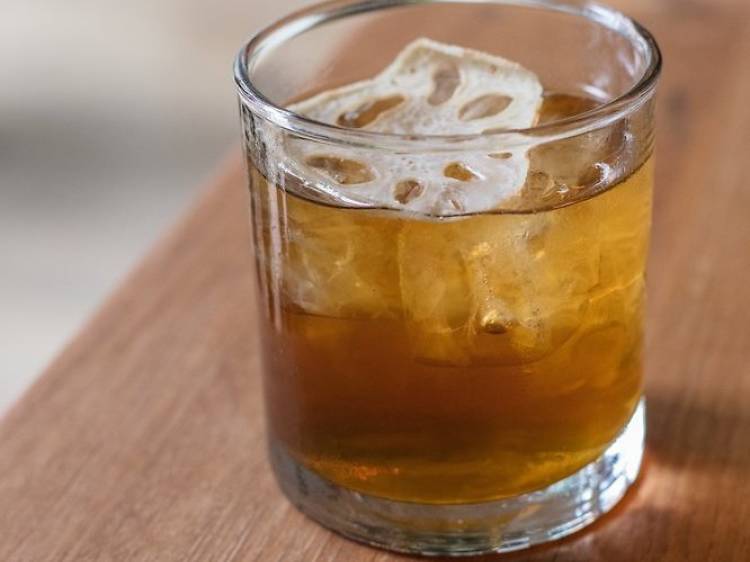 Bar Agricole alum Brandon Jew opened this ambitious homage to Cantonese food in 2016, melding traditional flavors and modern cooking techniques. Located in the former Four Seas space, the sunny, airy dining room presents a mashup of old and new, from the minimalist, mid-century wood furniture to the ornate gold floral chandeliers overhead, salvaged from Four Seas. The Michelin-starred restaurant serves inventive twists on classic dishes—think Dutch Crunch BBQ pork buns, a chicken feet terrine flavored with lime, chili, and sorrel, and Hodo tofu skin served with sungold tomatoes, purslane, and cured egg yolk. The vibe is lively and fun, from the open kitchen to the spicy, sweet, and tea-steeped cocktails by bar manager Danny Louie. (The beer line-up is equally impressive, featuring brews hailing from Belgium to Chicago to Baltimore.) Request a table with a view of the Transamerica Building out the window. 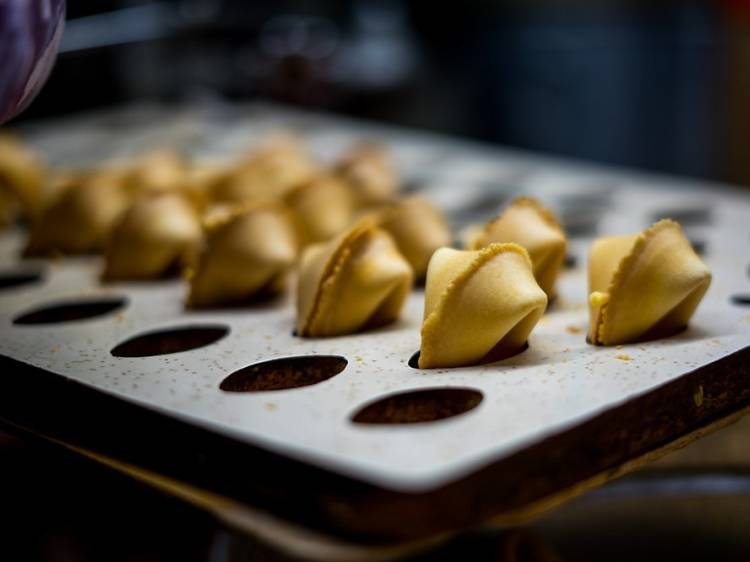 Veer down Ross Alley and look for the red lanterns hanging out front to find the unassuming Golden Gate Fortune Cookie Factory, which has been in existence since 1962. Though tiny—the entire operation consists of a handful of workers hunched over conveyor belts, folding messages into cookies by hand—it’s mighty: the factory cranks out around 20,000 cookies a day, supplying perfectly crackly after-dinner treats to hundreds of local restaurants. Watch the golden fortune cookie wafers coming off the machine, pancake like, before being bent into their traditional shape. (The women working will even let you sample a freebie, hot off the griddle.) The front end of the sparse space is lined with various varieties of fortune cookies that are available for purchase: green tea, strawberry, chocolate-coated, sprinkle-covered, and R-rated. You can even personalize your own fortune, to be tucked into a fresh cookie for $1 apiece. 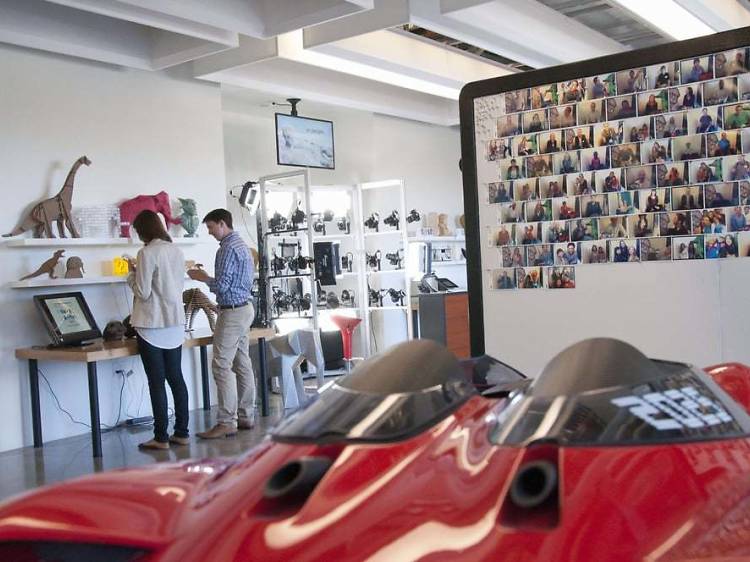 A gallery hidden away on the second floor of a software company may not sound that compelling. But when that company is Autodesk—a global leader in 3D design—the result is mind-boggling. The exhibits span architecture, engineering, transportation, entertainment, and new media, from an 8.5-foot dinosaur built from 62,500 Lego blocks (a combination of 3D modeling and its digital prototyping software) to an oxygen-generating Mercedes Benz concept car made from BioFibre, a lightweight material grown from seeds. High-tech works span the gamut from film to sports to industrial design. Check the online calendar for Autodesk’s bimonthly Design Nights, when you can peruse the gallery and enjoy food, booze, DJs, and interactive activities in the Design and Make Studio. 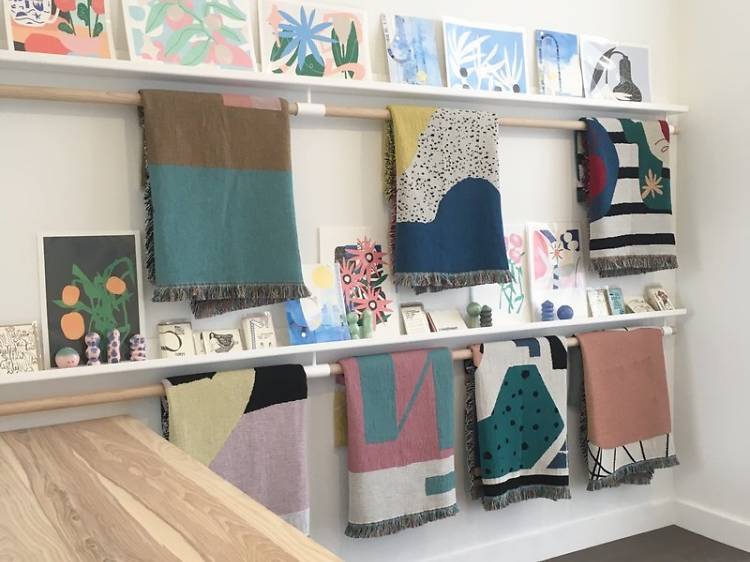 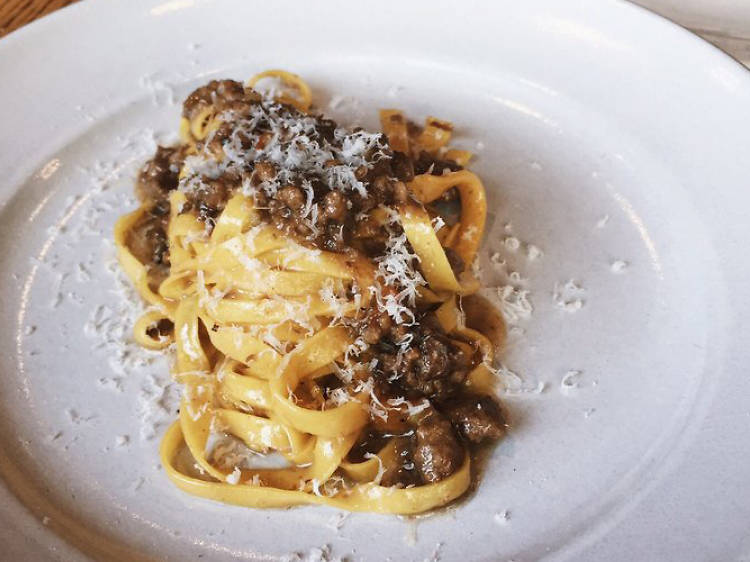 This California-Italian hybrid is the cool younger sister to chef Michael Tusk’s fancier counterpart, Quince. The interior is industrial, but warm, with exposed brick walls and steel beams, a slatted wood ceiling, and large picture windows. The entryway offers a glimpse of the wood-fired oven, usually packed with a tantalizing array of pizzas. The menu is rustic, but refined, including a daily-changing menu of spit-roasted meats, grilled fish, and handmade pasta. 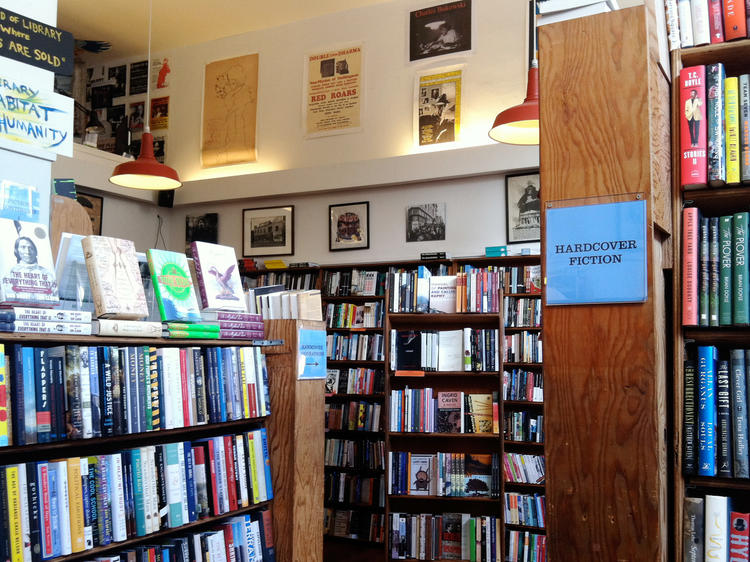 Since 1953, City Lights has been a San Francisco institution. The Beats are the shop’s patron saints, and quotes and photos of Burroughs, Kerouac, and Ginsberg are displayed throughout the store. (Quotes also gleam underfoot in the adjacent alleyway, like a counterculture yellow brick road). It’s a beautiful space, with arched doorways, vintage art, and light filtering in through large east-facing windows. It’s not uncommon for regulars to settle into a sunny corner with a book. Beat literature and poetry are housed upstairs, while new releases, fiction, and nonfiction are shelved on the main floor. Many of the staff picks have progressive political leanings, as you might expect from a shop where posters read “Eat, sleep, read, provoke,” and “A literary Habitat for Humanity.” 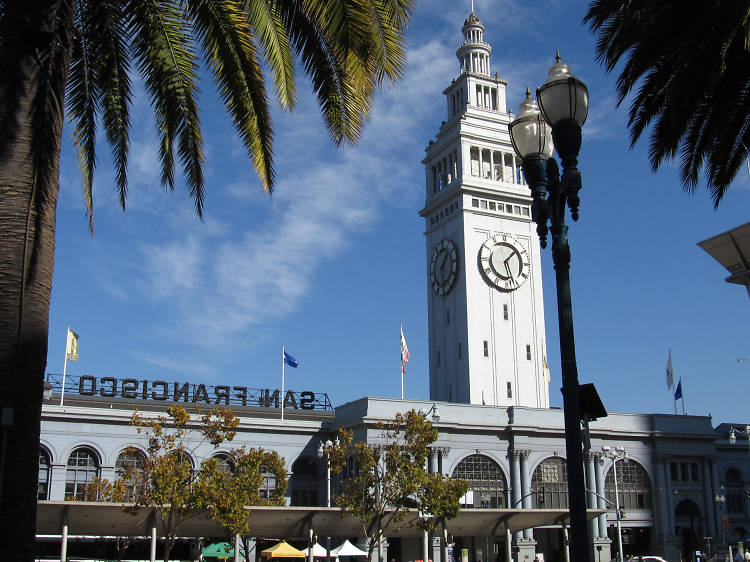 The Ferry Building Market is a required weekend pilgrimage for tourists and locals alike. The building itself is a feat of architecture, its second-story walkway offering commanding views of the action below. The Ferry Building is best known for the world-famous Cuesa farmers market, featuring the Bay Area’s freshest fruit, cheese, bread, ice cream, hummus, nuts, and more. Within the main hall, admire beautiful glazed ceramics and home decor at Heath Ceramics, Gastboards cutting boards and gardening tools at the Gardener, and dozens of varieties of honey alongside beeswax candles at Beekind. Out front, an open-air artisan market pops up every Saturday, where dozens of vendors peddle art, jewelry, clothing, leather goods and other handcrafts. 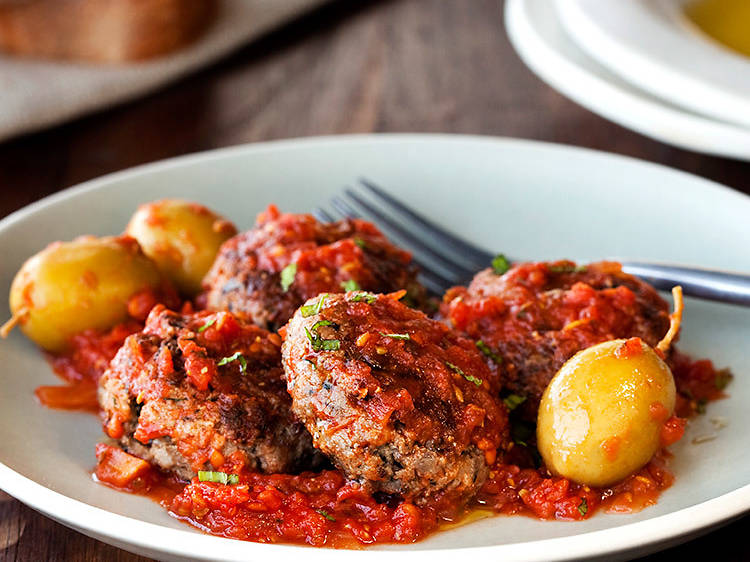 With its roaring fireplace, dark wood detailing, and uncommonly gracious service, this renowned Greek spot feels luxuriously old-school. Despite the white tablecloth flourish, it’s named after a small fishing village on the island of Samos in the Aegean Sea. (In Greek mythology, that’s also the place where Poseidon’s son, Orion, prepared elaborate feasts for his beloved.) The cavernous space is perfumed by the scent of wood smoke, thanks to the open-hearth grill and wood-fired oven where flatbreads, seafood, and game dishes are prepared. 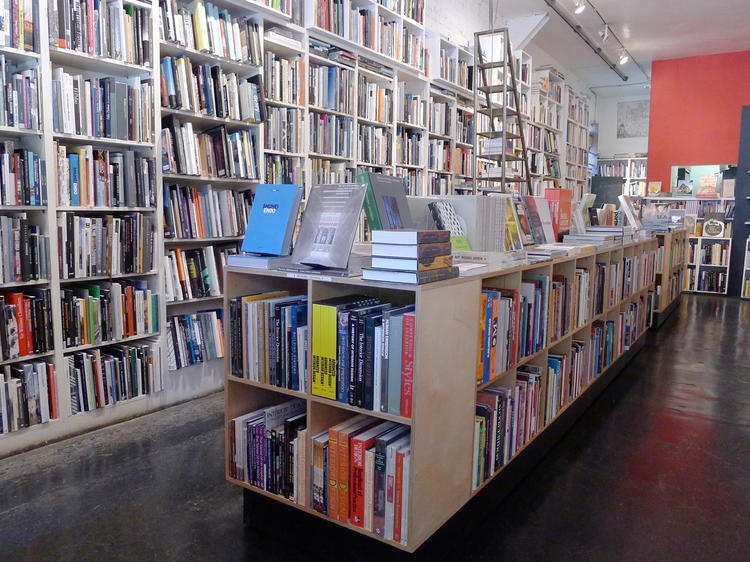 For 20 years, William Stout has been the bookstore design junkies go to get their fix. Stout, a former architect himself, started out selling European design books from his apartment. Through the years, his shop has doubled a salon of sorts for the creative community; Stout seems to know every architect in town. The bi-level store offers over 20,000 titles spanning architecture, urban planning, art, and design (industrial, landscape, interior, furniture, graphic, and beyond), dramatically backed by red accent walls. The tomes here are pricey—many start at $50—but are akin to objets d’ art themselves.