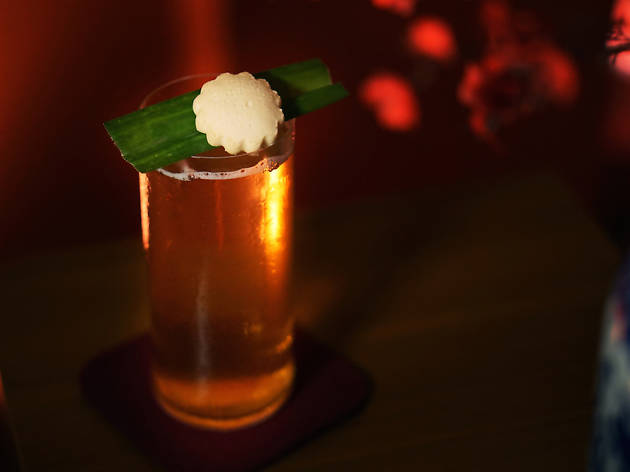 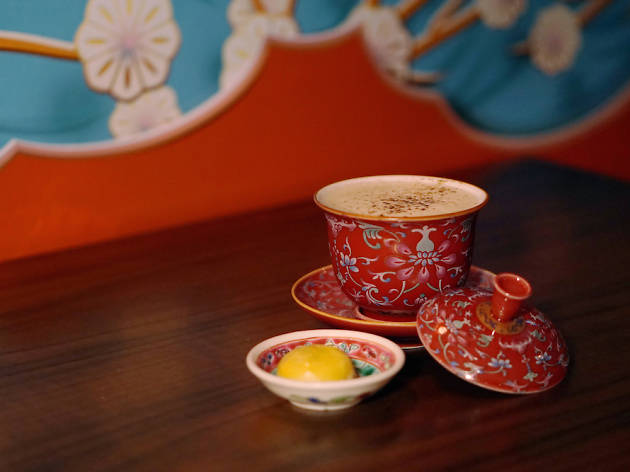 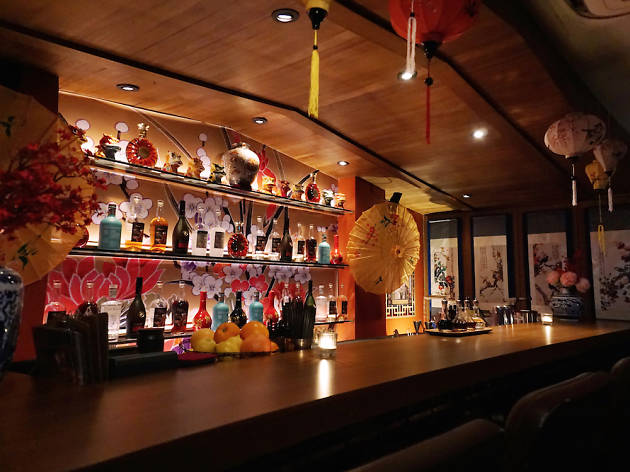 Rather than trying to sustain a winter wonderland holiday fantasy throughout the Lunar New Year season, Junior has replaced its alpine ski resort theme with a more time (and weather) appropriate pop-up concept. Teaming up with Remy Martin Cognac, the bar transforms into the House of the Dancing Lion from now till February 15. The orange-hued room is decked out in oriental fans, flower-print lanterns and Chinese paraphernalia. It's cute and kitschy, with equally fun cocktails to boot.

On the menu are drinks that peppered by the tastes and traditions of the holidays. If you're a fan of sour drinks and always up for a sneaky mid-day pineapple tart, imbibe on The Rolling for Prosperity ($25), a mix of brown butter rum, pineapple, lemon and baking spices shaken with egg white and served with a pineapple tart by Singapore’s Janice Wong. There's also the audacious Fanning the Flames, a whisky-forward cocktail that teams Bruichladdich The Classic Laddie and DOM Benedictine with coffee and bak kwa bitters – garnished with what else than a slice of charred chilli bak kwa. The Old Fashioned also gets a heavenly upgrade in The Sticky Mouth Kitchen God, which combines Remy Martin VSOP Cognac, sesame and glutinous rice wine with a piece of fried nian gao on the rim to up the ante. Turn up the huat at Junior – except January 24 as the bar is closed – before this limited edition run ends.

Every six months, Junior switches things up with a different cocktail concept. Its first was Norma, which featured mezcal and tequila-based drinks. Then came Magnolia, a showcase of New Orleans cocktail culture before Pacifica and its potent tiki tipples took over. Now, there's another reason to visit: Petite Chalet. It's a kitschy tongue-in-cheek nod to the American alpine ski lodge discos of the 1970s – yes, the extra e is intentional – and Junior's petit size. After all, the pocket bar only fits about 20 people. And this time, it has everyone dancing to ABBA sipping on cocktails meant for colder weather than Singapore's balmy climes.

Don’t let the ski-themed decor fool you – you’re not served tourist-grade beverages here. The drinks here are stiff (spiked with an array of alpine liqueurs), festive and well balanced. Categorised by the four seasons, the drinks also come in varying difficulty for beginner, intermediate and advanced drinkers. But don't let the labels scare you – this isn't an actual ski slope, just pick a cocktail and enjoy the ride. Try Sweater Weather ($25), a cognac-based drink that leans on dark rum, spiced pear and honey to emulate the cosy transition from summer to fall. Or from the summer menu, Garden Gnome ($25) is worth ordering if only for the cute ceramic cup it's served in. But don't let its innocent appearance fool you, this one's made for the adventurous imbibers, utilising absinthe, tequila, gentian, cucumber and dill. For a hug in a mug, get the Swiss Miss ($25), hot chocolate spiked with green chartreuse and dark rum that's topped with coconut cream and cinnamon. One sip and you're instantly transported to the alps – all that's missing are the snowy mountains and crackling fireplace.

But all's forgiven because Petite Chalet's food is as impressive as its drinks and atmosphere. The Bavarian pretzel ($7) with sweet onion mustard may be the best on the island. Then there's the chicken schnitzel ($13) with spiced pear ketchup and tartiflette ($18) made of layered brie and gruyere cheese, scalloped potatoes, lardons and onion – food to fuel dreams of your next winter getaway.