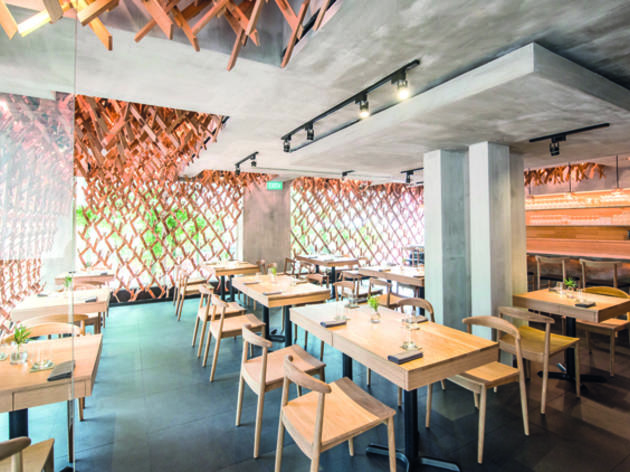 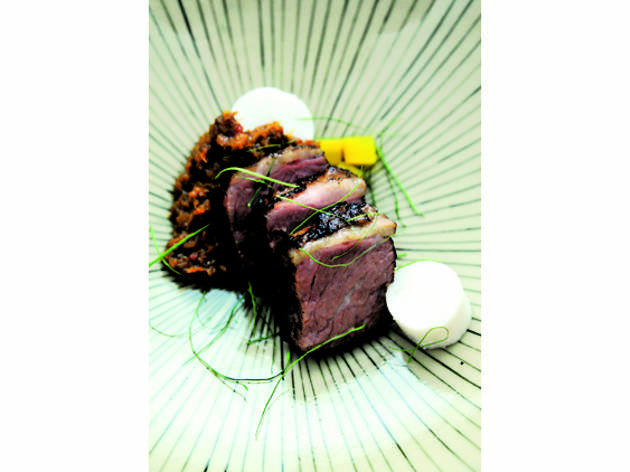 After an eight-month break, local chef pioneer Willin Low has finally reopened his flagship Wild Rocket restaurant – not that he hasn’t been busy during the hiatus. In addition to earning a sake certification and a stint playing the good cop on local reality cooking show Wok Stars, Low has completely redone the interior of the restaurant’s Emily Hill location and developed a new chef’s menu.

Gone is the white tableclothed stuffiness and monochromatic colour scheme that previously defined the space, which had been run ragged after nine years of service pushing the envelope on rempahs and wok hei. Low’s new dining room bears a warm Jap-Scandi aesthetic with mattefinished woods and clean lines in the lovely sunlight-bathed room. There is also the now-famous wooden nest of intersecting planks, which the chef-owner blames for the restaurant’s fourmonth reopening delay.

The á la carte menu has been left unchanged in the hiatus, and selected dishes are pulled out and featured as options for the three- and four-course lunch menus on offer daily ($33/three, $72/four – also available at dinner time). Regulars can still return for favourites like the salmon carpaccio donburi served with fried cargo rice ($18), slow-cooked slices of beef served in an interpretation of the tze char oyster kailan staple ($42), and finish their meals prising every last bit of the graham cracker biscuits from Low’s deconstructed martini glass strawberry cheesecake ($15).

More attention has been paid to the drinks in the revamp, with a house sake on offer and plans to introduce more labels to pair with the cuisine in the near future. After collaborating with hipster coffee roasters Chye Seng Huat Hardware for pop-up restaurant Temporium earlier this year, Low’s also improved the coffee experience here with the hipster roaster’s Terra Firma blend on offer.

The revamped restaurant’s main draw, however, is the new chef’s table menu ($118), served at lunch and dinner. The eightcourse extravaganza changes quarterly, but expect tweaks as and when Low sees fit. The little thoughtful touches like the Kihara x Supermama plates, ceramic chopstick holders shaped like origami cranes and locally-shaped and fired lampshades by makers Mud Rock distinguishes the dining experience at the eightseater perch.

Among the tasting portions on offer, the neat breadcrumbed ball of spanner and lump crabs’ meat sat in a crumble of duck’s egg yolk alone is enough to warrant a return trip, as is the piquant rebirth of Low’s signature laksa pesto pasta in risotto form, topped with uni or prawn. Other tasting plates like the short rib rendang slowed cooked for 48 hours, and the tagliolini topped with lobster cheekily named the Singapore fried noodle – a reclamation of the overseas Chinese takeaway staple – proves that the eight months was a break well-deserved.