Restaurants, Japanese Outram
3 out of 5 stars 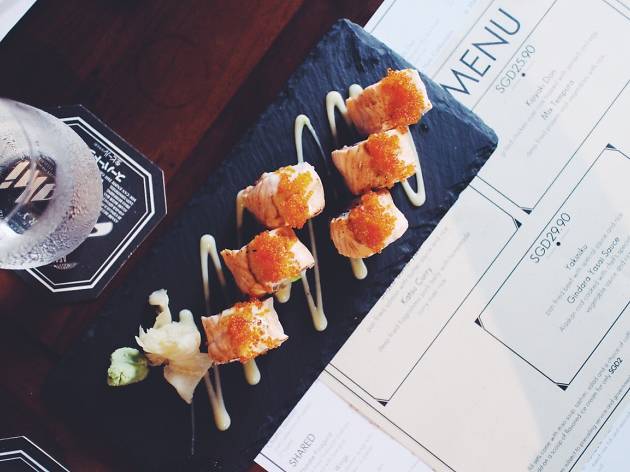 It’s difficult to believe that Singapore needs yet another Japanese restaurant, let alone one that shares the same name – but nothing else – as the Tokyo-meets-Lima hit in London. Undaunted, Chotto Matte (Japanese for ‘wait a moment’, an ironically apt name as it turned out) has opened in a corner block on the western end of Blair Road’s spruced-up Peranakan terrace houses.

As we sat, the po-faced waiter dumped cutlery, paper napkins and placemat menus in front of us in a pile (clearly expecting us to set the table ourselves) and said, ‘We have an omakase restaurant next door. It’s better over there. You guys know what omakase is?’

And so began a dinner marked by wildly uneven notes and aggravating service. Drink orders were not taken ’til a good 15 minutes after we sat down. Our first dish – sushi – was served without cutlery. Or plates. The soya sauce dispenser emptied after one pour. Empty plates were ignored, empty glasses unreplenished. A wrong order arrived at the table. It was sent back, but it still showed up on the final bill. What’s Japanese for ‘bo chap’?

The kitchen, led by the exuberant Roy Chee, tries hard, but since the former executive head chef of Standing Sushi Bar spends most of his time in the omakase restaurant, the quality in the main room is decidedly patchy.

One bite into the pale cut of white tuna on a perfectly dense pillow of rice ($5) revealed that sushi is Chotto Matte’s forte. There was exuberance, too, to a trio of outrageously thick Hokkaido scallops (a touch under-seasoned) crowned with creamy foie gras and served in a round dim sum basket ($38), and yakitori skewers of lusciously moist grilled eel ($3) and fatty pork belly ($5).

So much of successful Japanese cuisine depends on a philosophy of less is more, which allows the clear flavours of fresh ingredients to dominate. It explains why the muted notes of ripe but bland avocado cubes derailed what might otherwise have been a superb salad, tossed through with shards of crisp salmon skin and dressed with a tart yuzu vinaigrette ($18).

Similarly, a bowl of fragrantly oiled fried rice felt soggy, a defect not saved by practically undetectable cuts of wagyu and foie gras ($18).

His omakase service complete, chef Chee did the rounds of the tables, his cheerfulness lifting a mood that had been steadily sliding. ‘So hard to get good service!’ he confided in sorrowful tones as even he failed to attract the attention of his own staff to clear our table and refill our water glasses.

The last dish, slices of grilled dry tiger puffer fish ($12), arrived in a messy heap accompanied by a thin twirl of mustard that looked like it had been squeezed out of a tube by a hyperactive four-year-old. Maybe the fish was meant to have the texture of damp cotton wool – and we might have asked our po-faced waiter, but he, like our initial enthusiasm, was nowhere to be seen. Daven Wu