Restaurants City Hall
2 out of 5 stars 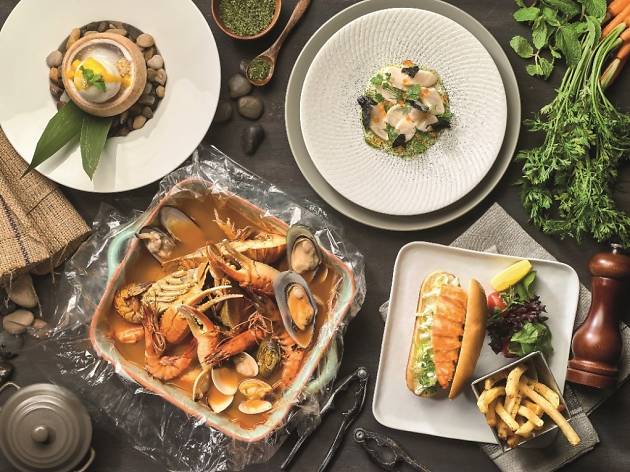 There was a time when seafood broil restaurants were popping up every month. But that was so 2014. Which makes it a little strange that Greg’s Seafood Shack only opened its doors now, in Grand Park City Hall, no less.

While the name evokes an image of a wooden hut in a shanty town, Greg’s doesn’t look too shabby. With an industrial-bare design and warm pendant lights, the indoor section of the restaurant is small yet comfortable. If you’re easily bothered by the smell of stale oil – the restaurant suffers from poor ventilation – have your meal outside instead. You’ll be that much closer to the dart board, foosball set-up and pool table to entertain yourself with before the meal arrives.

Instead of haphazardly pouring everything on the table, Greg’s serves its broils in claypot bowls to keep things warmer, longer. The Saint Gregory’s Place Seafood Broil ($28/500g, $52/1kg) comes teeming with tiger prawns, little neck clams, blue-lipped mussels, snow crab legs and a slipper lobster served in one of its six sauces. Now, with such low prices, I don’t expect killer seafood. And true enough, the mussels are dry with specks of shell embedded in the meat. But besides that, the rest of the bowl is plump and juicy, infused with the heady aroma of my choice of butter garlic sauce.

And then the seductive words ‘lobster roll’ ($40) call out to me. Before I get my order in, though, the waiter smirks and points out that the dish uses frozen lobster chunks. That’s no good. So the Maine lobster in bouillabaisse sauce – it’s the same price as the roll, mind you – would have to do. While the lobster is huge with firm, sweet and crunchy meat, the bouillabaisse disappoints. It’s as though the chef reheated a can of Campbell’s tomato soup and thickened it. The gloopy condiment does nothing to the natural sweetness of the lobster.

Naturally, I also zoom in on the Sri Lankan mud crab with ‘Singapore chilli sauce’. The tangy and spicy sauce packs a punch, but is too thin and less eggy compared to its zi char counterparts. Still, at $18 for a crustacean that looks about 600 grams big, it’s a damn good deal. The next time I’m here, I’ll order two.

I’m usually a strong proponent of dessert, but at Greg’s, skip it. The sweet plates come straight from the hotel’s café and can’t justify their hefty price tags. The Flower Pot ($18), for instance, is merely a mix of raspberry sorbet and berries housed in a chocolate shell with a smidge of mascarpone. You’re better off grabbing one of Greg’s many craft beer bottles ($14-$18) instead.