Restaurants, Korean Outram
3 out of 5 stars 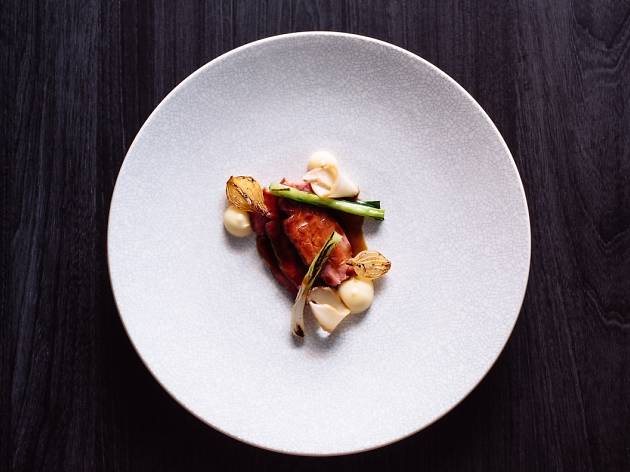 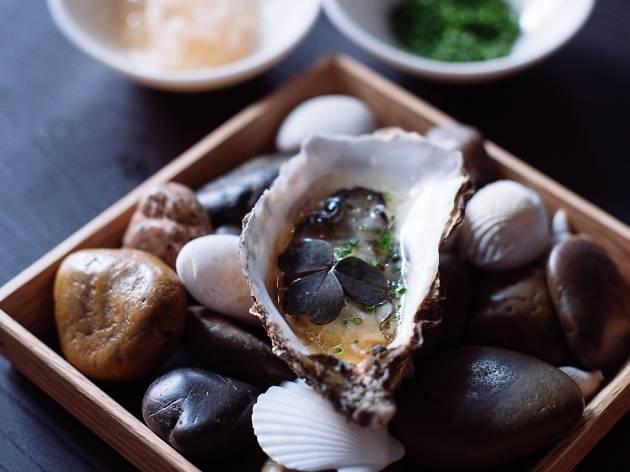 2/3
Oyster with Pomelo and Lemon 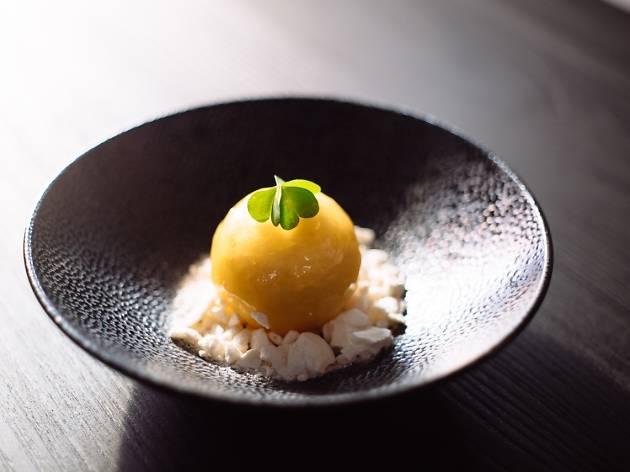 In Keong Saik, where diners can shut their eyes, walk blindly through any open doorway and be fed well, competition is tough. Which raises the question: is its newest player, Meta, up to snuff?

Yes, it appears so. The strapping head chef, with K-Pop good looks on show from the open kitchen, is Sun Kim, who trained at Tetsuya Sydney and Waku Ghin. The shophouse room is a classy, contemporary space where the best seats look into the kitchen (avoid the two seats closest to the unbearably hot lamps) and a row of tables-for-two hugs the opposite flank. And never mind that the soundtrack is saxophone-cheese – the hyphenated cuisine is the right kind of marriage between French presentation and Asian flavour.

An actual meal here is where reality unravels the hype. The cooking is at its best when the flavour balance is tipped towards Asia. Pear kimchi, worked into nubs of raw wagyu and gel-textured egg yolks ($25), offers a genius interpretation of steak tartare. With its bite of ginger, the dish of New Zealand John Dory, clams and fregola ($26) steer the palate to memories of Teochew fish porridges. And the starter carpaccio of thinly sliced scallops ($18) benefits from a zingy ponzu seasoning. Funnily enough, the one truly Korean-leaning dish on the menu, a scallion, seaweed and sea snail-studded pancake ($18), is the plainest of the lot.

Ordered on their own, each tiny assembly of elements look pretty meagre. The nine-course degustation menu ($125) makes more sense, except it's really just a set menu as chef Kim never once pops by to explain his creations. If he did, we might have learned more about the thought behind pairing overpowering matsutake mushrooms with sea bass, or talked to him about the over-salted limb of meaty scampi, made even more one-note with corn kernels sauced with head funk.

He leaves us on a high, though. The gently heated beef short rib with a garnish of black garlic and contrast of alliums ($28) melts in the mouth, and off-the-bone lamb chops with black olive crumble and quinoa cereal ($30) is a punchy segue to dessert.

Which you should save room for. Pastry chef Tommy Mah's plating of blood orange and cheesecake arrives as a gilded sphere hiding pockets of jam within, and a coffee-flavoured bon bon ($12) nestled in edible foliage is a giggle-inducing one-biter that has you breathing out liquid nitrogen.

It's the most fun we get to have in Meta, after a meal where we're staring at the one hardworking but incredibly swamped server working the 30 seats. And don't look to the drinks to take you to a happy high either. In a district with the highest concentration of world-class bars, there's really no reason to pay $26 for a watery Old Fashioned, or $25 for a Campari-bulky signature cocktail.

Towards the end of the meal, we're approached by a roving member of the team – likely the owner – who looks chuffed when we answer his question about our favourite dishes. But on this street with its stars and hard-hustling upstarts, we wonder if that praise means anything, and with Meta’s prices and slow service, if it’s enough persuasion to return.