Meet The Goodnight Gang: "When we ride, we feel freedom"

Where surfing, skateboarding and motorbiking meet

Hit the roads on a Saturday morning and you might just run into The Goodnight Gang. They’d be hard to miss, cruising around in flashy custom motorbikes ranging from vintage Vespas, rugged Harley-Davidsons, chopper bikes and café racers.

Started by 33-year-old technician Hendrajo Muhammad Waqiyuddin (better known as Jo), The Goodnight Gang is a brand and lifestyle rolled into one. It combines the love of motorcycling, surfing and skateboarding under a single label, selling stylish merchandise – think t-shirts, caps, tote bags, and more – and running weekly Breakfast Rides.

In strait-laced and buttoned-up Singapore (or so some people think), The Goodnight Gang embodies a refreshing freewheeling spirit. We chat with Jo to find out more about his brand and budding movement, and his hopes to inspire the next generation of bikers, skaters and surfers.

RECOMMENDED: "Skateboarding is unity": Meet the skaters changing mindsets about the sport in Singapore

Years in the making

Look to brands like Vans, or even high-street names like Prada and Louis Vuitton, and it’s clear that companies are keen to tap into the street cool associated with sports like skating and surfing. Subcultures have always been fodder for big brands seeking relevance, but the difference with labels like The Goodnight Gang is that they live it.

It’s fair to say that The Goodnight Gang has been close to 30 years in the making. According to Jo, he’s been “skateboarding since forever”, cruising skate parks and the streets before a minor brush with the police distanced him from the sport. During this time, he explored a professional career in breakdancing, eventually returning to skateboarding when a broken shoulder put a dent in his dancing dreams.

And Jo’s love for custom motorbikes? He half-jokingly admits that it was the aesthetics that first hooked him. “I was always interested in doing customised projects, because I’m so into choppers… and when I see Harleys, I’m like ‘wow, that’s something different’. When you see it on the road, it catches your eye. It’s style over comfort!”

With so many interests, The Goodnight Gang emerged as a way for him to bring them all under one roof. Jo is heavily inspired by the label Deus Ex Machina, which brings together surfing and motorbiking enthusiasts across the world including Indonesia, United States, and Brazil. “There’s nothing like that in Singapore,” says Jo.

After toying with the idea for 10 years, Jo finally launched The Goodnight Gang with the support and encouragement of his wife. Now, he manages everything on his own – from designing, to resourcing, printing, marketing and collaborations. He orchestrates surprise drops every three months – his first release, a t-shirt emblazoned with the words "1000% Brotherhood" sold out in a month – and participates in the weekly Breakfast Rides to mingle with the growing community.

No leather, chains or outlaws

You won’t find leather, chains or outlaws here though. The Goodnight Gang channels the laidback attitude you’re likely to find among surfers on the beaches of Bali. Jo himself points to family-run custom bike shop Cycle Zombies as an inspiration: “We’re more chill – that’s the culture that I want to bring to Singapore.”

The weekly Breakfast Rides best express this attitude. Every Saturday, Jo sends out an Instagram alert with a time and place to meet. Anyone can turn up, and the group cruises together to breakfast, where they eat before heading off to another location to chat about custom bikes and anything under the sun. One of Jo’s favourite meet-ups involved a random game of frisbee – it’s as wholesome as you can get.

These rides are partly inspired by the annual Distinguished Gentleman’s Ride – a day where motorsport enthusiasts dress to the nines and participate in rides to raise funds for cancer. So, it only makes sense that The Goodnight Gang channels their fun towards some small purpose. “I try my best to support local cafes around town, or anywhere. Sometimes members will suggest places to go – every week is different.”

“I also like to get to know everybody and see what they’re good at,” he says. “One of them is good at photography, so I tag their name and promote them at the same time. There’s one guy who’s good at videography and he’s working on a video about our Breakfast Ride too. And one of my friends owns a barbershop so I’ll recommend him within the group too. Everybody’s supporting each other, it’s not just about me.”

It’s probably no surprise that we discovered The Goodnight Gang on TikTok. For any brand or movement to have longevity, the next generation must come on board.

Besides social media, Jo is reaching out to the youth through skateboarding. He meets them at skate parks to share tips and encourage them to pursue the sport – which he sees as a window to the world. Jo says, “You always need someone who can drive you. And it’s about damn time, guys. You need to go out often, see the world, see what you can do outside.”

And while Jo is taking things slow with the business, he hopes to expand The Goodnight Gang to neighbouring countries. It’s not hard to imagine future surfing trips and long motorcycle road trips in places like Malaysia.

But his dream is to set up a café in Singapore that will act as a meeting point for surfers, skaters and bikers in the country. It’ll be the ultimate expression for what The Goodnight Gang stands for now, says Jo: “Some people like skateboarding, but don’t own a motorcycle. Or they may like surfing, but don’t do skateboarding…maybe they’ll see someone else wearing my shirt and they’ll be like ‘Eh bro, we’re family, man!”

Cruise to these favourite haunts 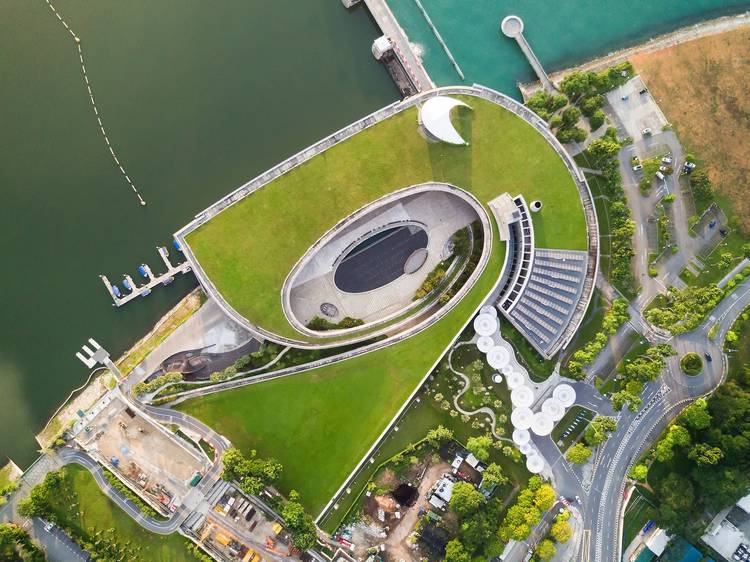 Marina Barrage attracts couples and families all year round thanks to its breathtaking 360º view of the bay area. For Jo and the crew, this is a great spot for sunrise views. They head to a secret spot that's near to – but not quite at – the Barrage itself. We can't disclose where, but nothing's stopping you from heading down for a breakfast picnic anyway. 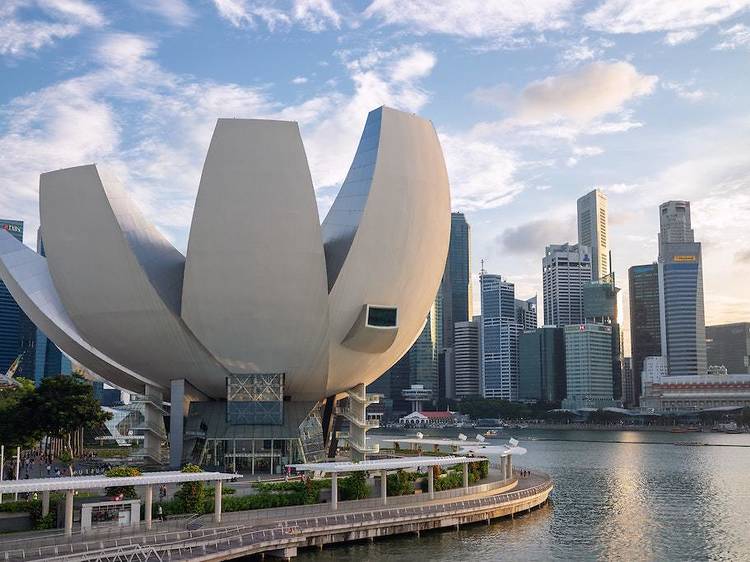 Cruise around Keppel Viaduct and Esplanade Drive for some stunning views of the city. Jo and The Goodnight Gang love this route for it's wide and empty roads (especially in the mornings) and for scenic views of the ArtScience Museum, the Esplanade and the bay on Esplanade Drive. "When we ride, we feel freedom," says Jo – and it's not hard to see why on these roads. 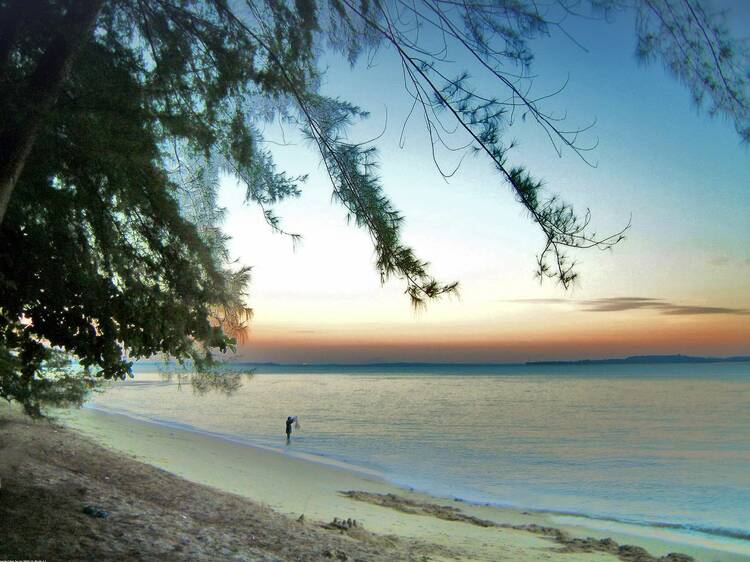 This one's a bit of a tease – apparently there's a decent surfing spot on Singapore's mainland, but Jo's tight-lipped about where it is. "I might get killed if I tell you," he laughs. Apparently, the place has gotten crowded recently, which has disgruntled some of its regulars. We wouldn't want to spoil their fun, so all we can say is that it is, um...somewhere...by the beach? 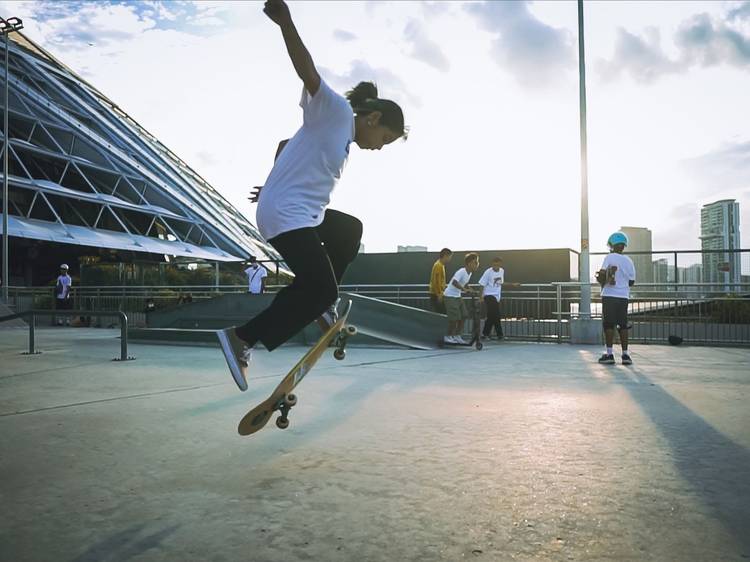 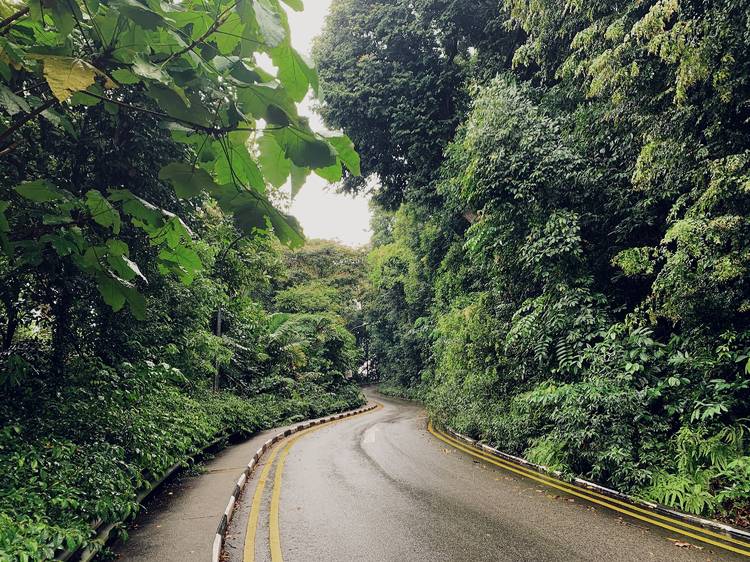 The most scenic driving routes in Singapore 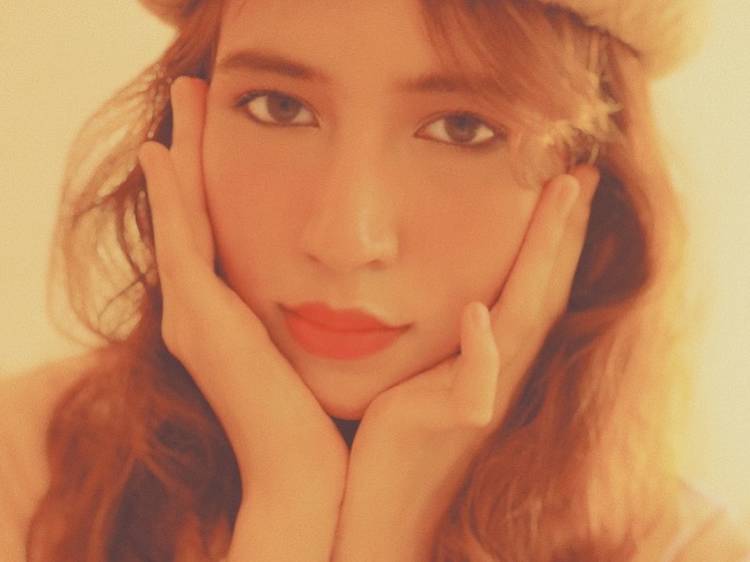 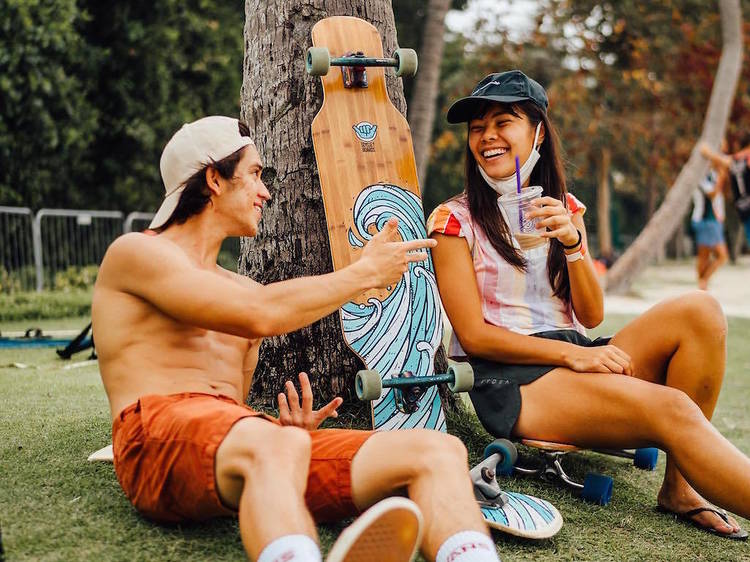 The best longboard shops in Singapore