Oceans are not just our planet’s most precious resource: they’re also incredible places to take a dip. With no chlorine, no icky changing rooms and the ever-changing natural surroundings of tides, weather and sealife, swimming in the open sea is an addictive thrill. And if the water is cold, so much the better: chilly swims have been proven (by actual scientists!) to be good for your health.

But not every coastline is equal when it comes to swimming. Away from the world’s great beaches there are currents, high waves and hidden dangers that can make sea-swimming dangerous for landlubbers. Which is why savvy travellers need to know about these epic ocean pools dotted around the world’s coasts.

Filled by the tide or pumped-in seawater, some semi-natural and others manmade marvels, these bathing pools are havens for sea swimmers. They’re the best of both watery worlds, with safe, calm water plus the same jaw-dropping natural settings and views that make open-water swimming special. From the Pacific coast of Mexico to the Atlantic islands of Madeira and Tenerife, this is the definitive guide to the world’s most breathtaking ocean pools. Dive in!

The 15 most spectacular ocean pools in the world 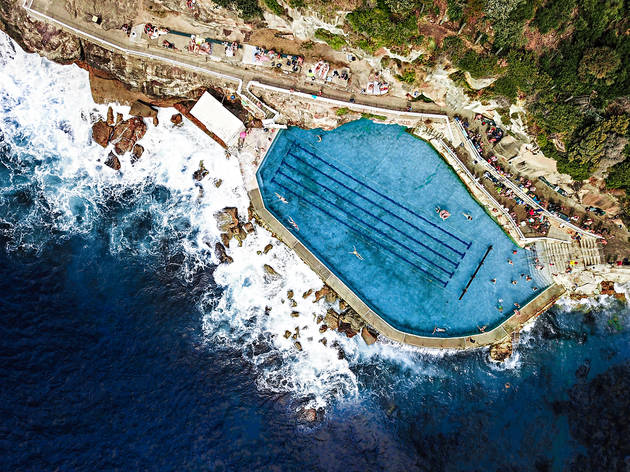 Saltwater swimmers are spoilt for choice in Sydney: the city is home to 35 ocean pools, more than anywhere else in the world. Bronte isn’t the most famous (that’d be its glamorous neighbour, Bondi Icebergs Pool), but with its cliff-hugging location, natural curves and 24-hour opening times, it could well be Sydney’s most beautiful place to watch the sun rise over the ocean. 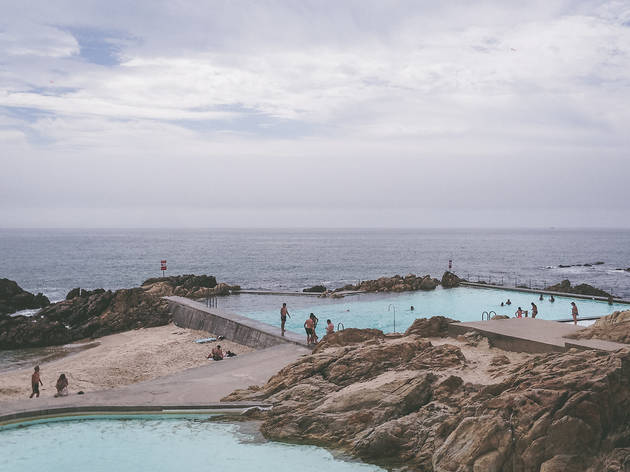 Not just a stunning spot for a dip, Piscina das Marés (in Leça da Palmeira, on the outskirts of Porto) is also an architectural marvel: its angular concrete frame was an early work by starchitect Álvaro Siza. In fact, Siza grew up ten minutes away in Matosinhos – which might explain the intimate way that the pools and ramps of the Piscina das Marés melt into the rocky Atlantic coast. 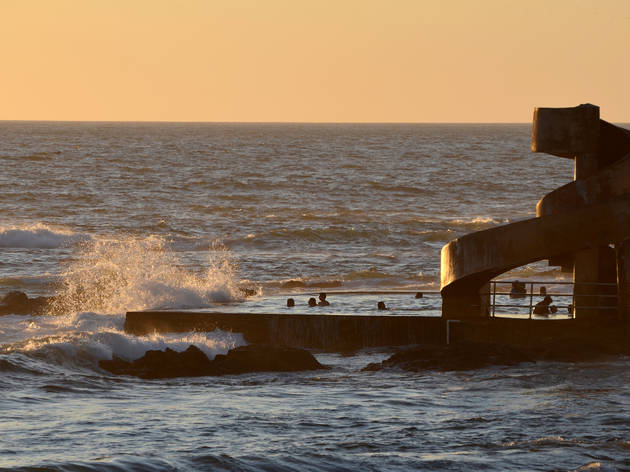 Chilean traveller Antonio Olivera created this incredible seaside structure back in 1914 in his adopted hometown of Mazatlán. The pool, with its distinctive spiral slide, was restored in 2015. Now it’s a dreamy place to watch the sun set over the Pacific. 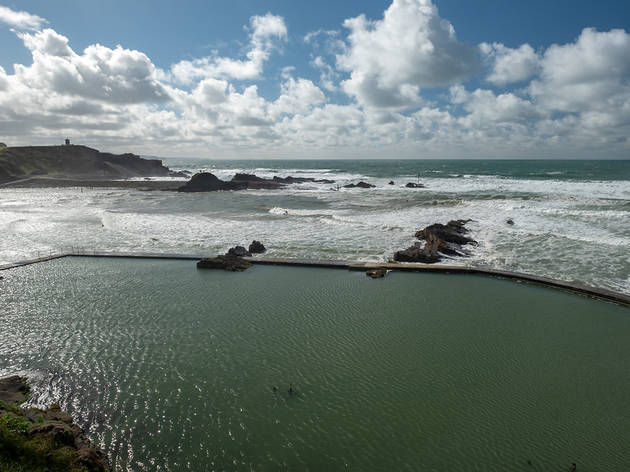 The county of Cornwall has some of the UK’s sunniest weather, and Bude Sea Pool is the spot to soak it up. Built on Summerleaze Beach in 1930, it’s the centre of a sandy cove, with spectacular Cornish skies watching over colourful beach huts, the crenellated ramparts of Bude Castle and the town’s distinctive Pepper Pot storm shelter. 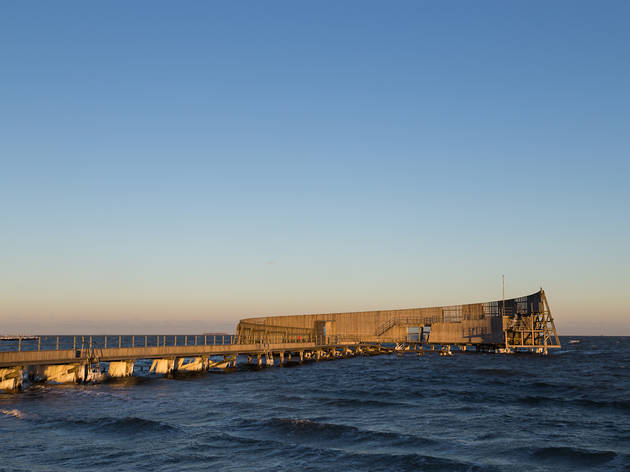 Jutting out into the Øresund Sound, the Kastrup sea bath has been open to Copenhagen’s sea-swimmers since 2004. Despite the Nordic latitude, the sea here can be surprisingly warm – especially since the circular shape of the Søbad is designed to keep the wind off. Of course, this being design-mad Denmark, it looks great too. 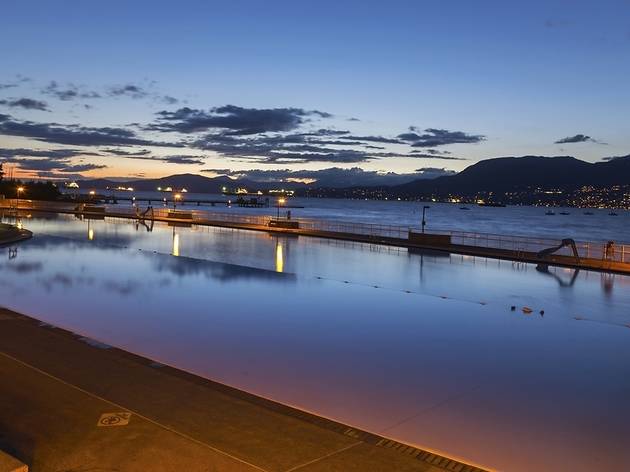 Known by Vancouverites as ‘Kits Pool’, this bayside swimming spot is nearly three times as long as an Olympic pool – and it’s heated to boot. Add in incredible views across to the city’s West End and we’ve all got at least one good reason to be jealous of Vancouver. 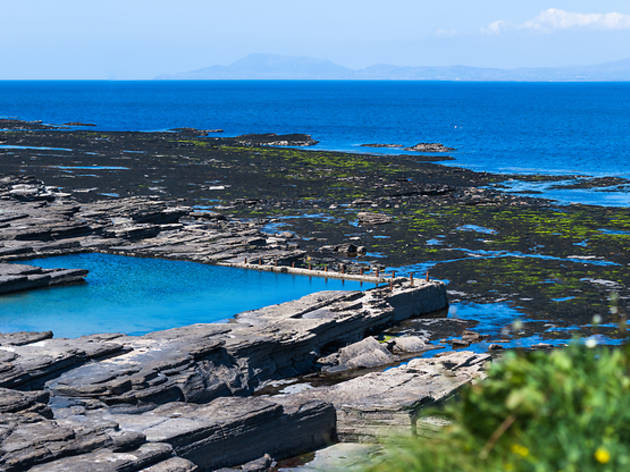 Also called the West End Pool, this is one of two open-air bathing spots carved into the rocks of Bundoran, a surfing town on Ireland’s west-coast Wild Atlantic Way. It’s hard to imagine a more ruggedly magnificent setting for a dip. 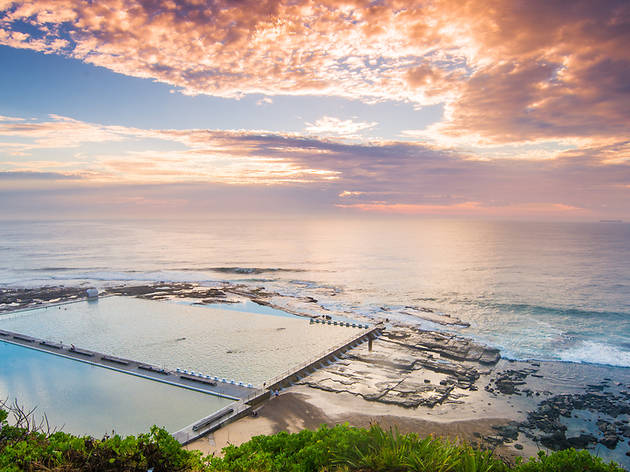 It’s not just Sydney that’s blessed when it comes to ocean pools – its New South Wales neighbour Newcastle is also endowed with two stunners. Merewether has been serving the city’s summers since 1935, and there’s 24-hour access to its two huge pools overlooking the Pacific – plus a sandy beach right next door. 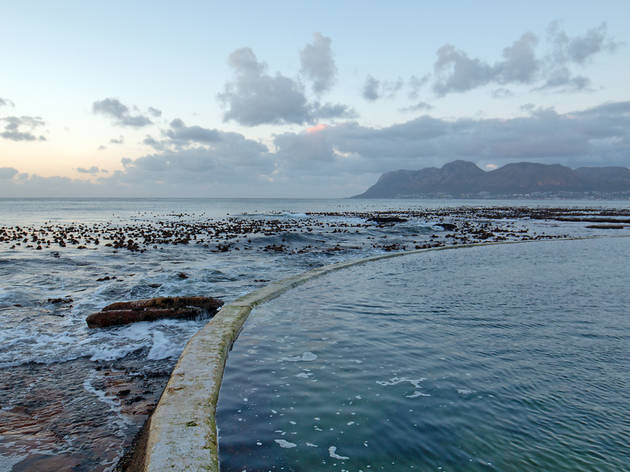 Although Cape Town has one of the world’s most celebrated seawater pools – Sea Point Pavilion – there’s an even more scenic pool in the city. Less than an hour from Cape Town central station, and sheltered from the winds of Table Bay, Dalebrook Tidal Pool draws clued-up swimmers to pretty beach suburb St James. It’s a stunning spot for a dip, with epic views across False Bay. And unlike Sea Point, you might find yourself sharing the pool with a spiky sea urchin. 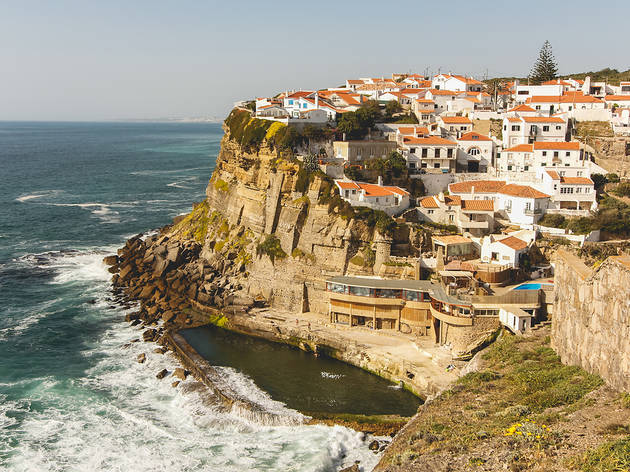 Perched on granite cliffs near the Portuguese royal retreat of Sintra, the village of Azenhas do Mar is the site of a truly awe-inspiring ocean pool. At high tide, it’s comletely filled up by huge Atlantic waves. As the water gradually ebbs away, the pool remains as a patch of still water, fringed by a sandy beach. 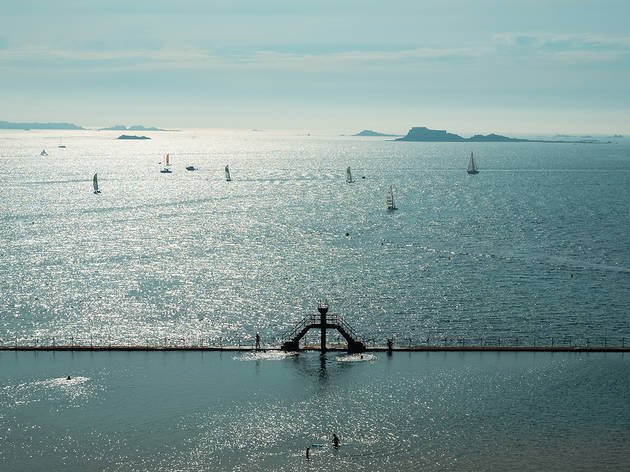 The French port of Saint-Malo has the highest tides in Europe: the sea here can rise more than 40 feet in six hours. At high tide, the only trace of this huge tidal pool is its diving board rising above the waves – but as the tide retreats, it leaves a still expanse of water just begging for a dip. After a few lengths, sit on the sea wall and watch the boats sail by. 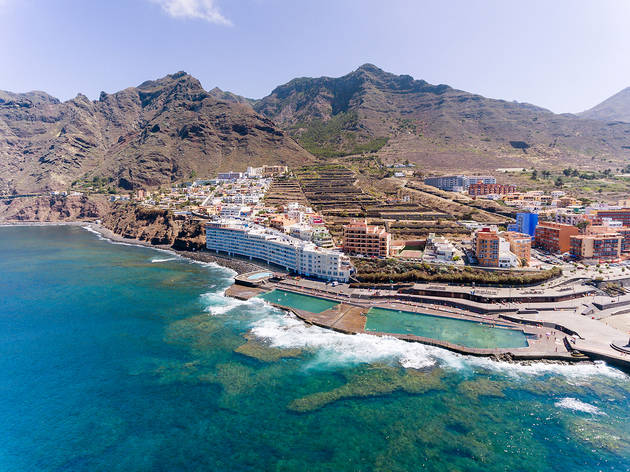 Much of Tenerife’s rocky, volcanic shore isn’t ideal for sea swimming – hence the many natural and semi-natural bathing pools dotted around the Spanish island’s coast. Bajamar’s two pools are some of the largest and best developed, and though it can feel more like a public swimming pool here than a secret cove, the crashing of huge waves breaking on the pool wall is a constant reminder that this landscape owes its harsh beauty to nature. 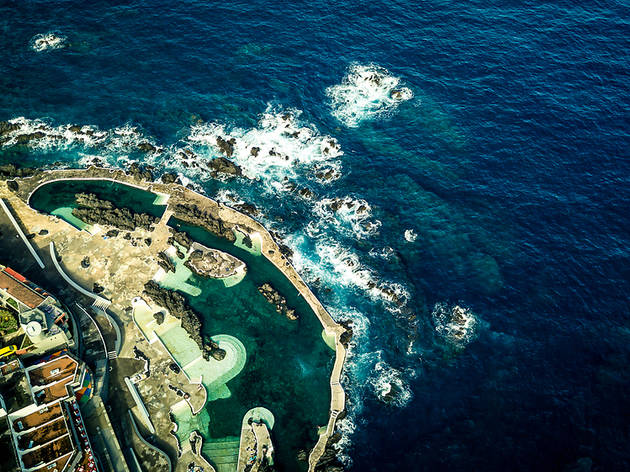 Another volcanic island, another dramatic set of natural pools formed from natural lava. In fact, the town of Porto Moniz on Madeira has a choice of two pool complexes: the rugged Piscinas Naturais Velhas or the larger Piscinas Naturais, each jutting out into the Atlantic with waves crashing all around. 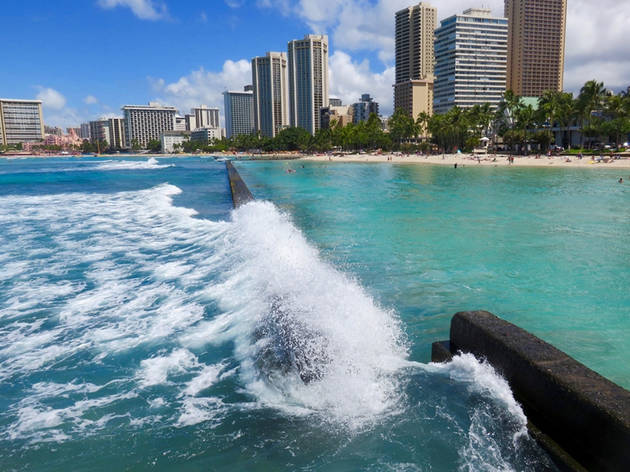 Waikiki is world-famous for its waves – but on one section of glorious Honolulu beach, a breakwater known as the ‘Waikiki Wall’ shelters swimmers from the surf for almost a quarter of a mile. The result: a manmade tropical lagoon known locally as ‘the Ponds’, with the high-rise skyline adding extra glamour. 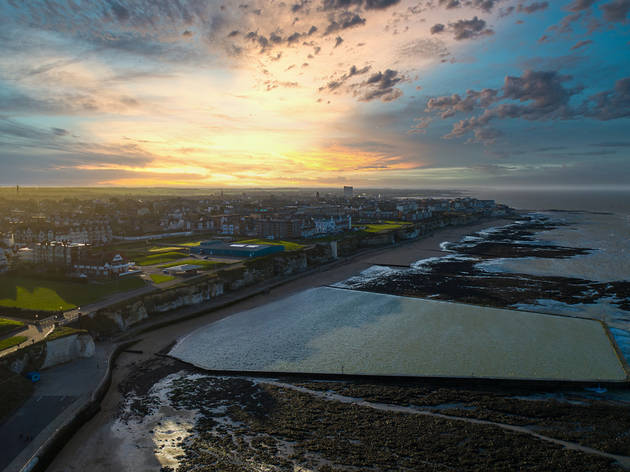 Take a stroll down the coast from English seaside town of Margate and you’ll come to Walpole Bay, where a vast tidal pool stretches out beneath the chalk cliffs of Kent. Built in 1937, it’s as popular a bathing spot as ever – even when the English weather isn’t playing ball – and the ultimate place to catch the fiery Margate sunsets immortalised in paint by JMW Turner.