Get a cheap taste of the good old days

Hidden in between and behind shiny high-rises, massive station complexes and other architectural monsters, Tokyo's old-school alleyways or yokocho are treasure troves for anyone looking to experience the city's less sterile, more down-to-earth side. Found all over town, Tokyo's yokocho host thousands of tiny eateries, pubs and shops, some of them dating way back to the early postwar years, and provide opportunities for slipping back in time to the smoky, change-filled decades of the Showa era. Recent years have seen some yokocho become trendy locations for opening hip new restaurants, adding another flavour into the diverse mix of tastes, attitudes and customs found on these backstreets.

If you don't mind a little neighbourly physical contact (many joints seat less than 10 patrons), yokocho eateries and izakayas are cheapo heaven. People's booze, such as highballs, shochu and Hoppy, is often available from ¥100 or so, and the food maintains the same dirt-cheap standard without sacrificing quality. The alleys are also ideal for discovering the less stuffy sides of Japanese culture and making new drinking buddies. Do avoid going in big groups though, as there simply won't be enough space for all of you. Here's our comprehensive list of 17 fascinating yokocho – crawl through them all and you'll have learned more about the city than many people ever will. 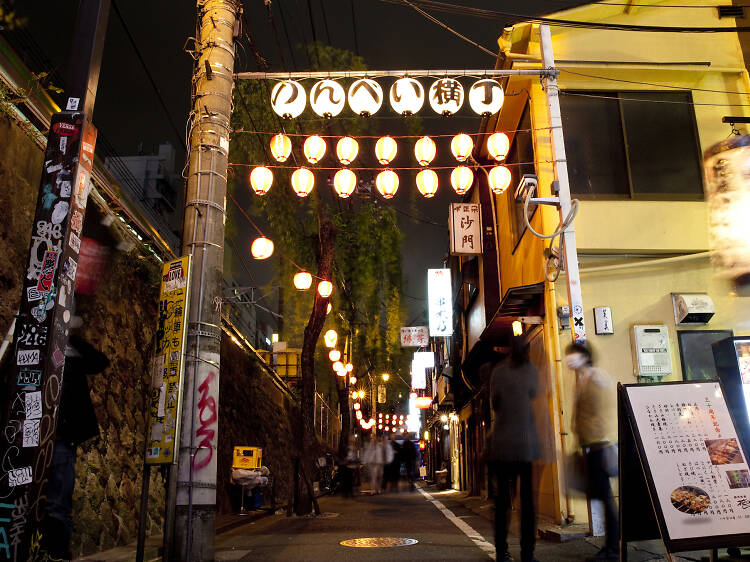 When to go: 6pm-midnight
The street that's now known as Nonbei Yokocho ('Drunkard Alley’) once hosted the Tokyu railway corporation's head office, but things here changed drastically in the early postwar years. Dating back to the early 1950s, popular yakitori shops and similar eateries rule the alley. One of the most popular is Okasan ('mother'), a bare-bones joint that's been serving hungry patrons for three generations. You'll also find bars, bistros and quirky shops at Nonbei, conveniently located right by bustling Shibuya Station. Although it's become a tad more touristy in recent years, this one's still one of Tokyo's most representative yokocho. 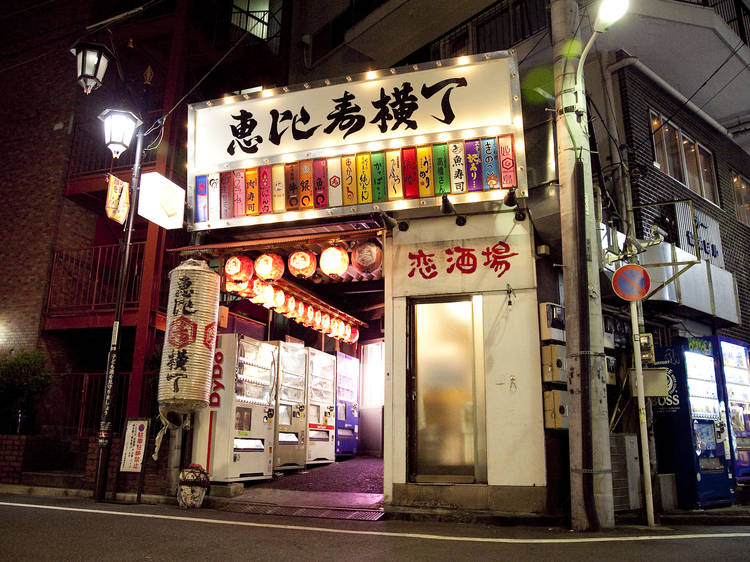 When to go: 5pm-early morning
Built on the remains of the old Yamashita shopping centre, Ebisu Yokocho is now a lively food alley with plenty to offer for courageous gourmands. Entering the street is like opening a door to a different, vibrant world where the liveliness spreads and welcomes you to enter Chinese eateries, bistros, bars and sushi shops (make sure to try the meat sushi). Some of the shops have less than five square metres of indoor space, which explains the many desks and chairs lined up near the entrances. If you don't mind a little physical contact during your meal and are open to meeting new and interesting people, head on over and forget about the time – most businesses here operate until sunrise. 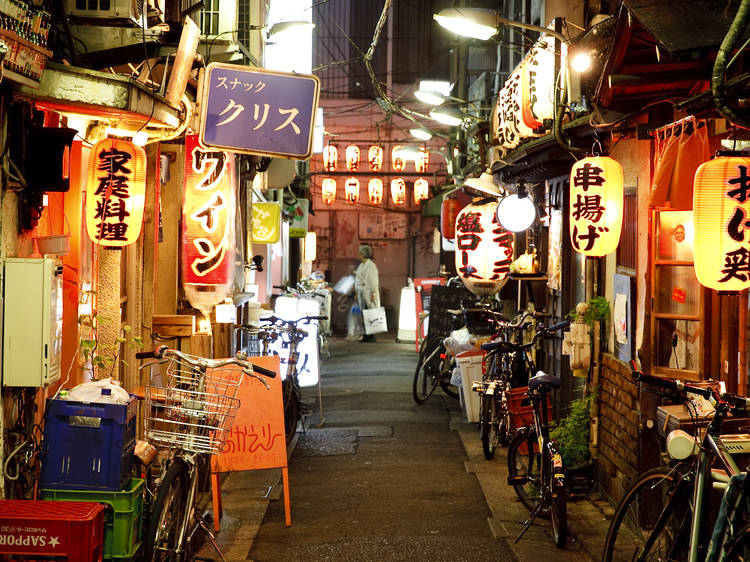 When to go: 6pm-2am
Sangenjaya's 'triangle' features pubs lined up in a maze-like alley. The area's inability to keep up with the constant redevelopment going on makes for rather chaotic but charming surroundings. Patrons of all ages gather here and hang out at the selection of both new wave and old-fashioned shops, including yakitori joints, 'ethnic' stores and curry eateries. The alleys may be narrow and space at a premium, but stepping foot into this land that hardly ever sleeps opens up entirely new, unexpected views of the city. 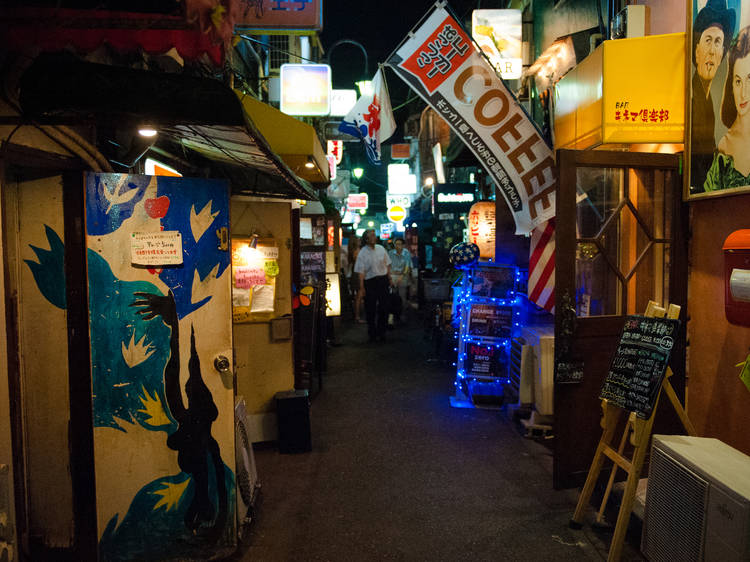 When to go: 8pm-morning
More than 270 tiny drinking dens are crammed into seven ramshackle streets in Shinjuku's Kabukicho. Each place has a unique vibe – ranging from high-end cocktails to hard rock – and the atmosphere can be anywhere from friendly to downright hostile. Choose your spot wisely and you might find yourself engaged in conversation with writers, poets or cartoonists, all the while getting drunk on cheap wine and chewing on some grilled chicken. Note that many of the bars have cover charges, which can be as high as ¥4,000. 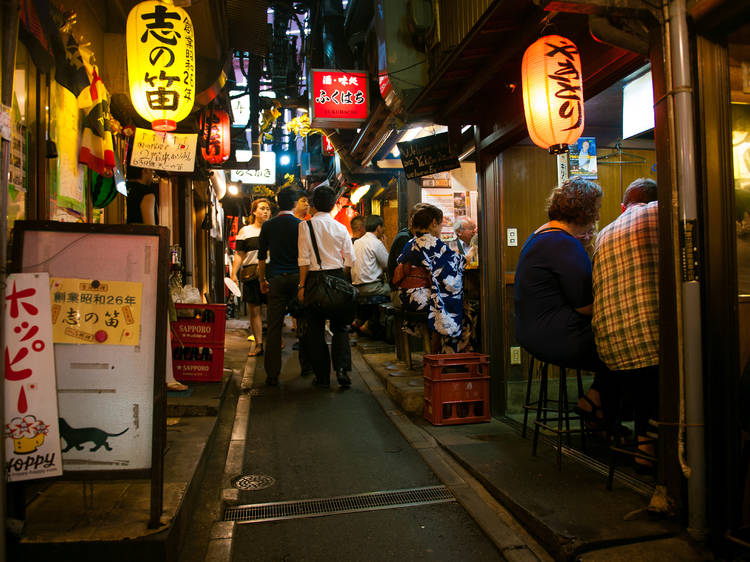 When to go: around noon-11pm
Also known as 'Piss Alley' – charming, right? – this ramshackle collection of tiny bars and eateries can be found on the west side of Shinjuku Station, crammed between the railway tracks and the Ome-kaido highway. Some of the buildings here have survived frequent fires and other disasters in past decades, as evidenced by the burns and similar damage visible on the walls. You'll find everything from yakitori joints to cafés and soba eateries lined up, but booze is what it all comes down to in the end. 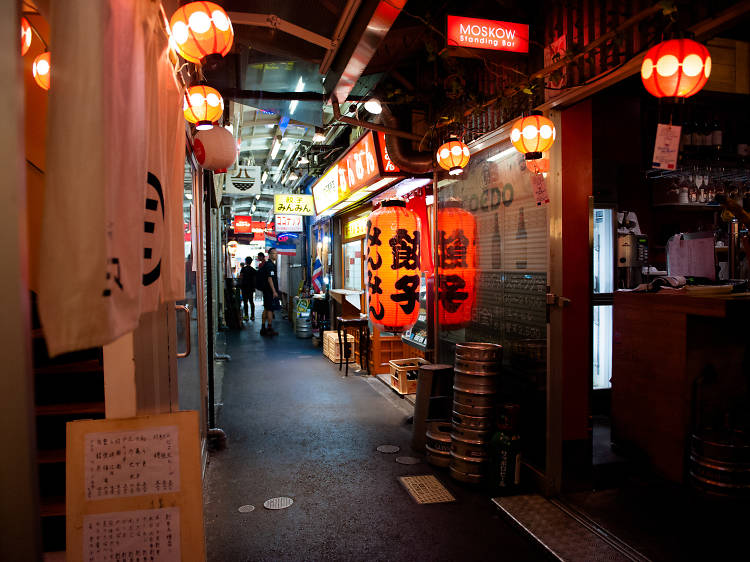 When to go: lunchtime-11pm
First built as a flea market in the early postwar years, this collection of alleys on the north side of Kichijoji Station is now best known for its many small but excellent restaurants, which began popping up in the late '90s. You'll also find grocery and clothing stores here, along with specialist shops for goodies like yokan (sweet bean jelly), pork cutlet and taiyaki (fish-shaped pancakes filled with anko bean paste). The bustle is turned up at night, when diners crowd the trendy standing-only bars and miniature eateries. For the complete experience, try spending an entire night bar-hopping without exiting the harmonica-like mini-maze. 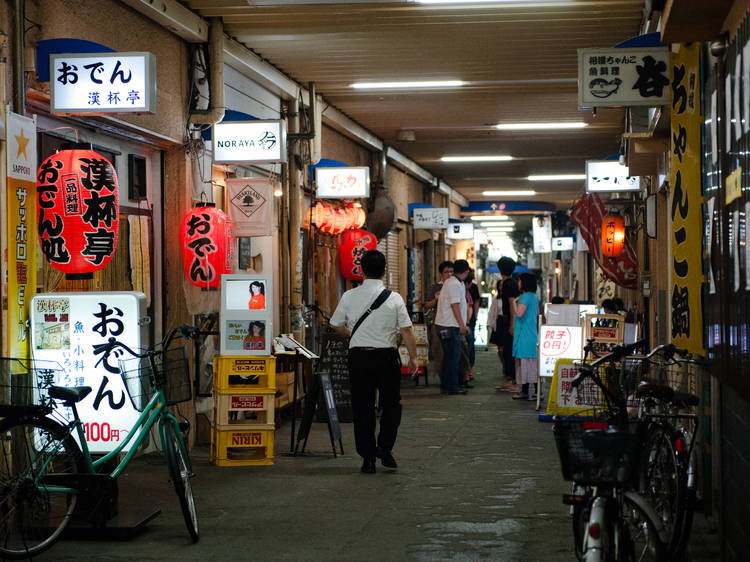 When to go: lunchtime-11pm
Koenji's two yokocho areas both have their own characteristics: the Daiichi Ichiba used to be a produce market but now consists of around 10 short alleys hosting mainly Asian restaurants and a few traditional watering holes. Try raw noodles or bánh mì sandwiches at the Vietnamese spots or fill up on Korean goodies at the izakayas – all great stops on a Koenji gourmet tour. Local youngsters, however, seem to prefer the many ramen and curry joints also found here. Gado-shita, on the other hand, is an underpass teeming with bars and yakitori places. The accepting atmosphere and fair hustle and bustle are what keep patrons coming back. 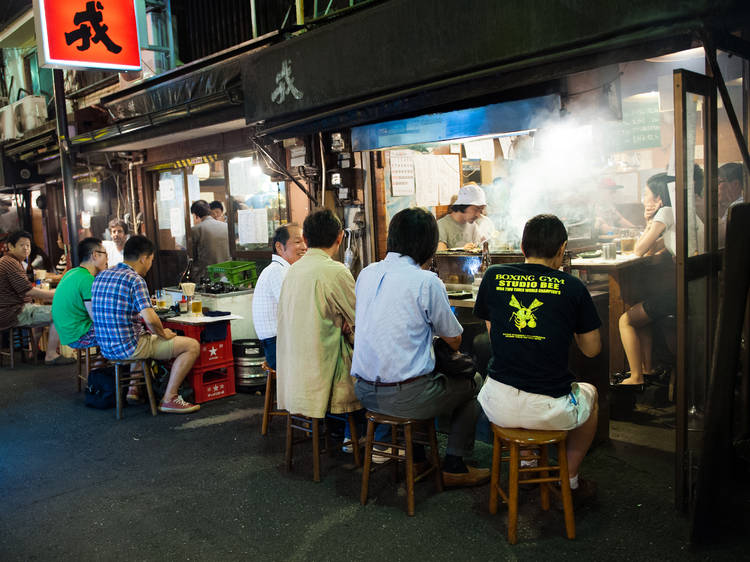 When to go: lunchtime-11pm
Extending toward Kichijoji from the south side of Nishi-Ogikubo Station, this bar street is easily recognisable by the smoke rising from shop chimneys in the hours before opening time. Most places here are extremely wallet-friendly, with sake starting from around ¥200, highballs from ¥100 and tipples for a couple hundred. The area tends to get busy long before dark, with everyone from young couples to salarymen crowding the tables. You'll also be able to find Thai, Taiwanese, Okinawan and Moroccan food to complement all that alcohol. 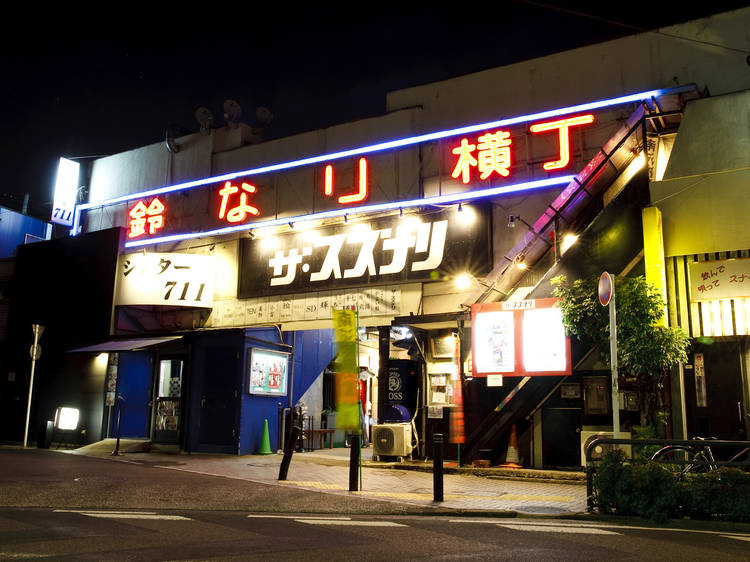 When to go: 8pm-morning
This alley is annexed to the Suzunari theatre, the Honda Gekijo troupe's oldest theatre and a Shimokita landmark. Once a rehearsal room, the space now houses around 15 quirky eateries and a retro-style floating bar on the first floor. 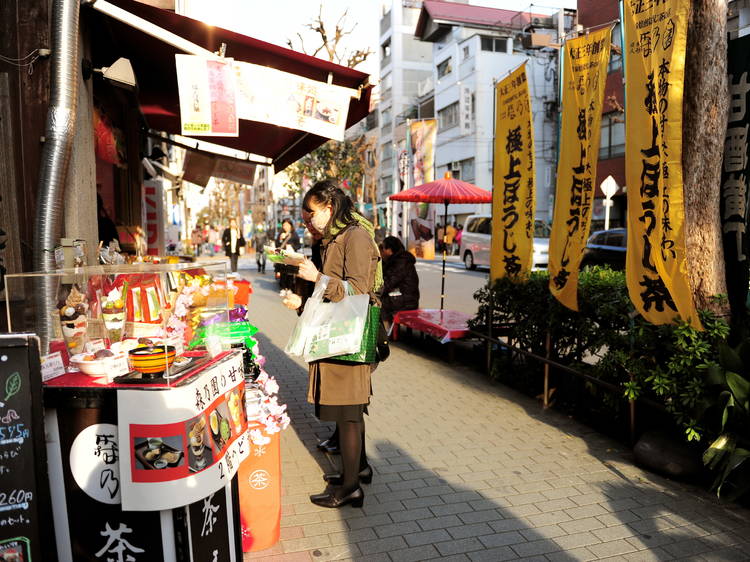 When to go: morning-evening
Slightly removed from the high-rise centre of Nihonbashi, this shopping street is dotted with restaurants and interesting knick-knackery. A total of around 70 shops line the 400m street between Meiji-za and the Amazake Yokocho intersection, while the many side streets also hide plenty of gems. This wonderfully old-school spot is beloved as a treasury for 'downtown gourmet', with soba, sushi and tamagoyaki (rolled omelette) among the highlights. Sweets lovers will want to check out the ningyoyaki cakes, taiyaki pancakes and soy milk donuts, too. 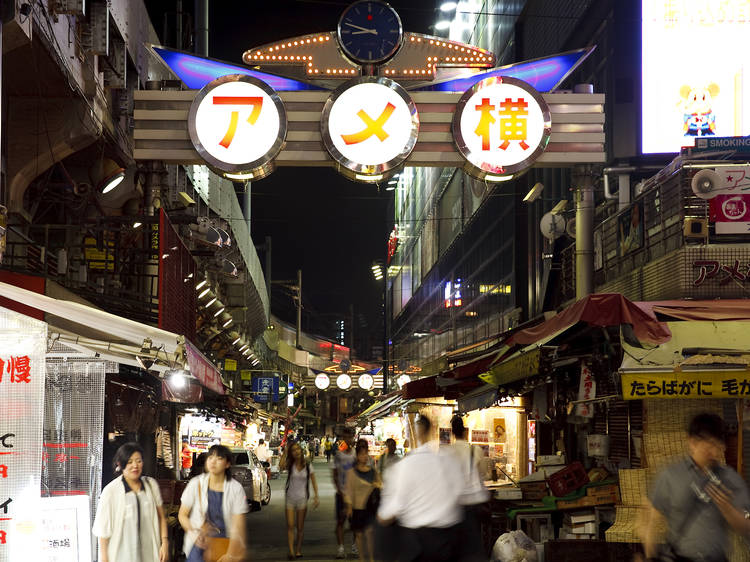 When to go: 11am-late
This maze of streets next to the railway tracks between Ueno and Okachimachi stations houses the Ameya Yokocho, another old-school spot that started life as a postwar black market. Shops here originally peddled everything from candy to leftover supplies discarded by the American military, which is how the 'Ame' (for both 'candy' and 'America') part of the name came into being. Ameyoko now hosts more than 400 shops specialising in clothing, cosmetics, souvenirs, jewellery, fresh seafood and more, with many products sold at wholesale prices – haggling is also acceptable at times. Don't forget to check out the Ameyoko Center Building's basement, where Southeast Asian and Chinese food is on offer. The place gets particularly busy around New Year's, when Tokyoites come here in search of delicacies. 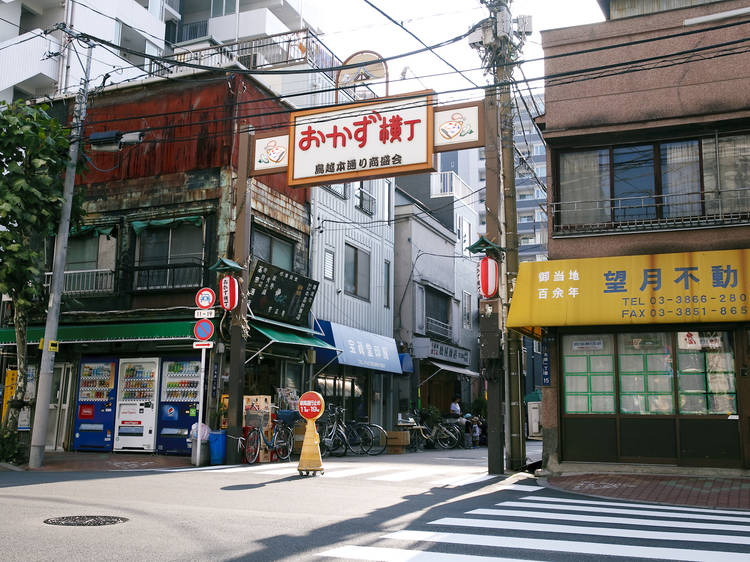 When to go: morning-evening
Found in Taito-ku's Torigoe, this shopping street features around 230 shops selling a variety of groceries, including readily prepared, traditional okazu (sides). Roadside snacking is possible at the small rest area, equipped with tables and chairs, found near the middle of the street. Note that most shops here are closed on Sundays. The surrounding neighbourhood, a traditional shitamachi zone that avoided catastrophic damage during the war, is worth visiting as well. In June, nearby Torigoe Shrine hosts the annual Torigoe Matsuri, an awesomely rowdy celebration. 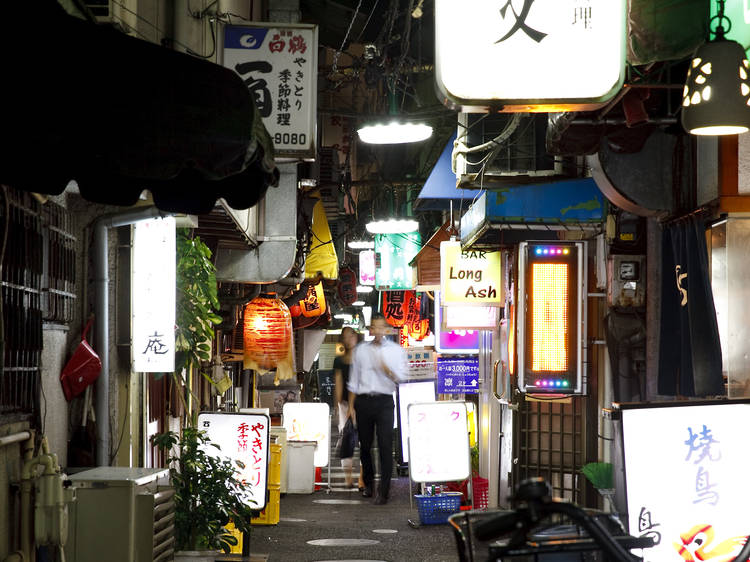 When to go: 11am-9pm
This maze-like collection of nostalgic, Showa-era alleys houses around 60 eateries and bars, including Bulldog with its 25cm menchikatsu (ground beef cutlet), and several renowned sushi joints. The early post-war buildings make for an authentic downtown experience, while the friendly shop owners always welcome newcomers with open arms. Don't skip the yaki (grilled) sushi, a rarity in Tokyo. 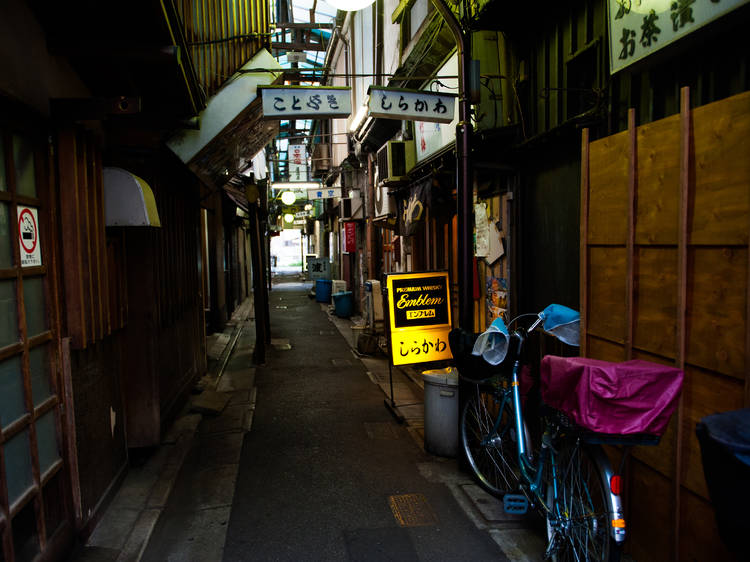 When to go: 7pm-11pm
Take the Keisei line less than 10 minutes from the Sky Tree and you'll be at Nonbe Yokocho, first founded as the 'Tateishi department store' around 1955. Its current incarnation hosts around a dozen eateries and izakayas, spread out over two alleys. The area may look rather drab at daytime, but most of the shops actually have very interesting interiors. Make sure to investigate side streets. 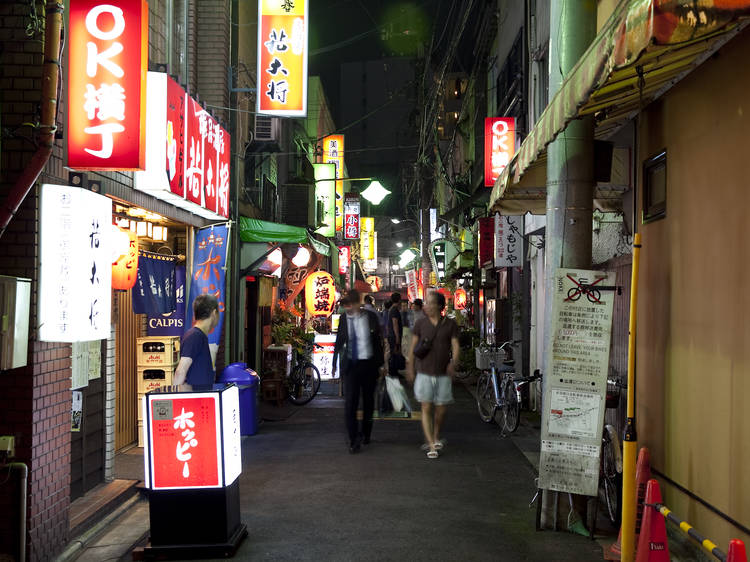 When to go: 3pm-11pm
The slogan at Akabane's OK Yokocho is ‘everything that's OK to eat and drink’, and although that just might be a slight exaggeration, you will find around 30 eateries and pubs lined up here. With origins dating back to the postwar black market, the atmosphere here is authentic to say the least – think more dirt-cheap Chinese, izakayas and eel than trendy Italian spots. Most places open their doors early in the afternoon and get crowded soon after. As truly old-school spots like this are relatively rare in Tokyo, OK Yokocho is frequently used for film and music video shoots. 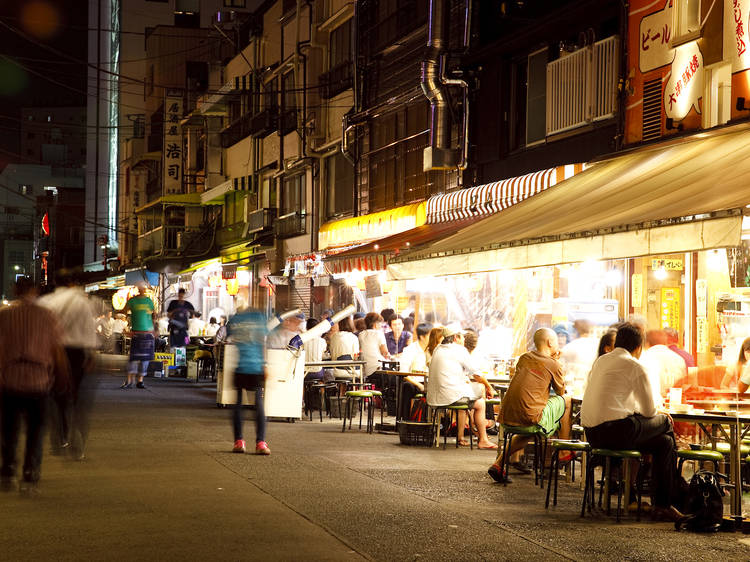 No need to fret if the name Hoppy Street doesn't ring a bell – this Asakusa alley, named after the classic beer-like beverage and also known as 'Stew Street', isn't exactly high on the list of standard tourist attractions in the area. That, however, is part of the charm of this roughly 80-metre long street, located on the west side of Sensoji Temple next to an off-track betting zone. Although small and unpretentious, Hoppy Street boasts an impressive collection of storefront bars that offer drinks (and more) at very reasonable rates. Traditionally, patrons at these watering holes were a hard-drinking crowd, sipping beers as they scanned the latest horse-racing broadsheets, but young locals and travellers have also discovered the spot in recent years, leading to a change in atmosphere: on weekdays and weekends alike, race fans, tourists, and families with children in tow crowd the neighbourhood. If you pass by the Wins Asakusa off-track betting spot, you'll enter Asakusa Hatsune Koji Inshokugai, renowned for the hordes of Hoppy-drinking horse racing fans sitting outside the bars debating and predicting race results. 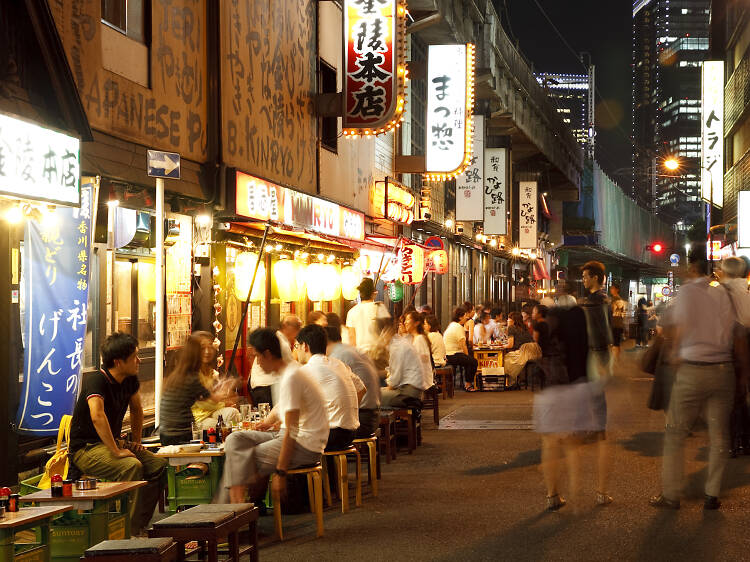 When to go: 11am-11pm
You'll never go hungry between Shinbashi and Yurakucho stations, as eateries line the street all the way from north to south. Known as 'salaryman heaven', this area is home to countless yakitori joints, standing-only bars, Chinese restaurants and Korean barbecue houses. Prices are cheap to say the least, but quality is rarely sacrificed. You'll see more smoke and bustle the closer you get to Yurakucho, whereas the drunken, jolly atmosphere is present throughout the street. The noise and vibration from the trains passing by above only add to the charm.