What the hell is modernism? Only the dominant architectural style of the mid-twentieth century, that’s what. Its basic elements – a lack of ornament, a connection between indoors and outdoors, form following function – have mutated over the years, but its appeal endures. Because honestly, what more could you want in a space than shitloads of glass, sunlight, steel and reinforced concrete?

Spanning a bunch of subgenres, from Bauhaus to brutalism, modernism has shaped everything from suburban houses to skyscrapers. And despite being widely poopooed by people who prefer their buildings boring and old-fashioned, modernist structures at their best are both incredibly practical and drop-dead gorgeous.

No wonder, then, that modernist architecture has a serious cult following. With so many examples around the world, you can even plan your travels around spotting the biggies of the genre. And now there’s a new essential guide to doing literally that: ‘Modernist Escapes: An Architectural Travel Guide’, by author, designer and modernist obsessive Stefi Orazi.

Orazi’s stonking guide brings together more than 130 modernist buildings around the world, including legit icons designed by architectural big shots like Alvar Aalto, Ernö Goldfinger and Le Corbusier. All are open to visitors, and many even host overnight stays, for full immersion in that impeccable mid-century aesthetic.

Here are ten of the most beautiful modernist buildings that feature in Orazi’s book. Read on if you, like us, are planning a trip that’s a) super-memorable, b) kind of highbrow and c) absolute #modernist gold for your Insta feed.

Beautiful modernist buildings that you can visit 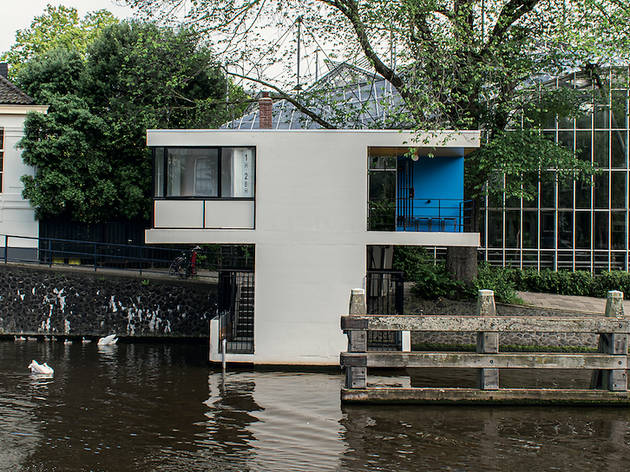 ‘For more than a century, Amsterdam’s bridgemasters, responsible for opening and closing bridges for passing boat traffic across the city’s 100 kilometres of canals, were accommodated in bridge houses – small structures perched on bridges, with panoramic views of surrounding waterways. With the introduction of modern automated systems the buildings have become redundant, and since 2018 these tiny buildings have been adapted to create hotel rooms sleeping up to two guests.’ 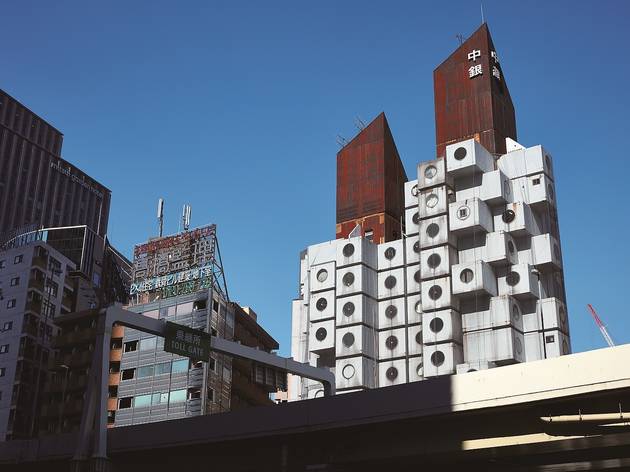 ‘Located in Tokyo’s fashionable Ginza neighbourhood, this 13-storey tower is Japan’s best example of Metabolist architecture, a movement founded in the 1960s by young Japanese architects responding to post-war reconstruction by proposing urban models that were flexible and updatable. The building, designed by Kisho Kurokawa, comprises 140 prefabricated steel cells, each secured with just four bolts to a concrete core. A dedicated group of architectural preservationists are working hard to protect this landmark building.’ 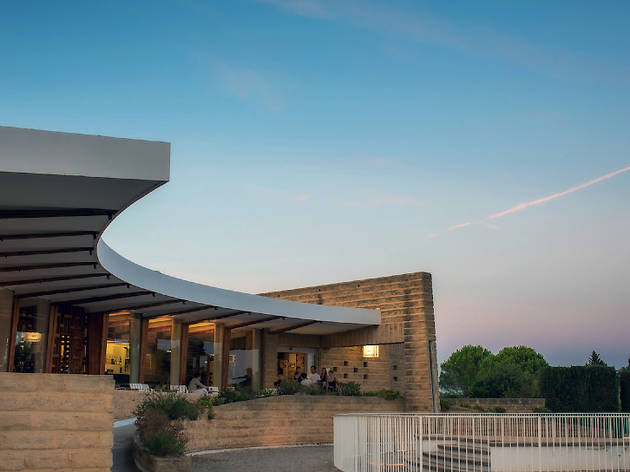 ‘When the tourism and leisure industry began to boom in the 1960s, hoteliers Louise and Marc Berc embarked on an ambitious project to build a hotel on a plot of land in Saliers, near Arles in the south of France. The Bercs were introduced to the sculptor and architect Armand Pellier, who shared their vision for a modern hotel. The open-minded couple entrusted Pellier with a flexible budget and high degree of design freedom, resulting in a rare piece of modernism that looks as if it has been plucked from Palm Springs and transported to rural France.’ 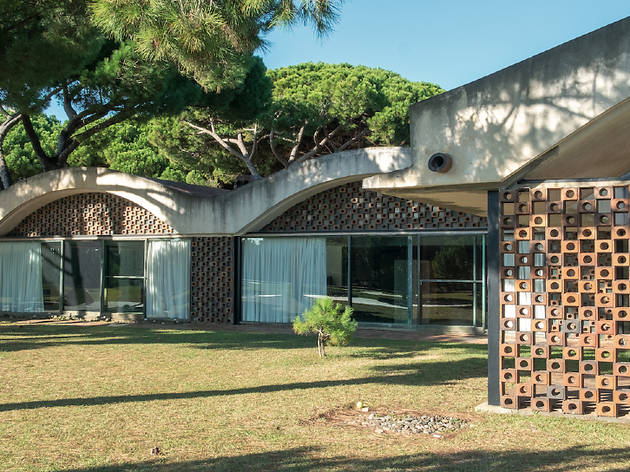 ‘La Ricarda is one of the most culturally significant mid-century houses in Spain. Just outside Barcelona, this achievement was the result of three great minds with a shared vision: the architect Antonio Bonet Castellana and his clients Ricardo Gomis and his wife Inés Bertrand. The large house, completed in 1963, sits on a raised platform and comprises a series of twelve modules – each with a vaulted ceiling – organised in terms of function. For example, there is a children’s module, a parents’ module, a dining module and so on.’ 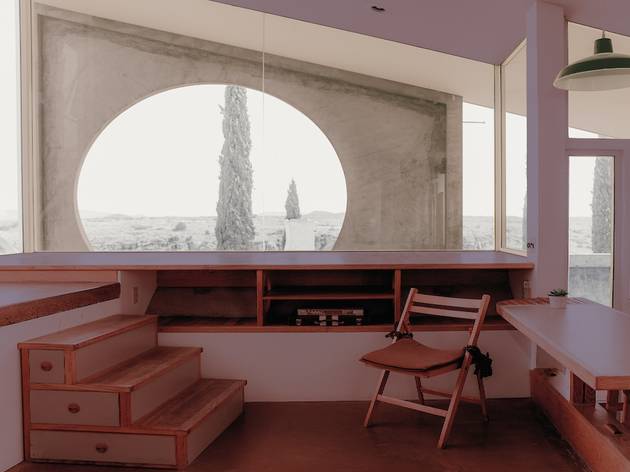 ‘In the middle of Arizona, 100 kilometres north of Phoenix, is an extraordinary utopian prototype city with futuristic concrete structures that wouldn’t look out of place in a Star Trek film. Arcosanti was conceived by Italian-born architect Paolo Soleri, who based it on his concept of ‘arcology’ – the fusion of architecture and ecology. Overnight guests have the option of staying in modest guest rooms and dormitories or in one of three apartments with spectacular panoramic views of the desert.’

You can stay overnight at Arcosanti. From $55 (£40, A$72) per night. Luxury suites are available via Airbnb. You can also camp in the grounds. 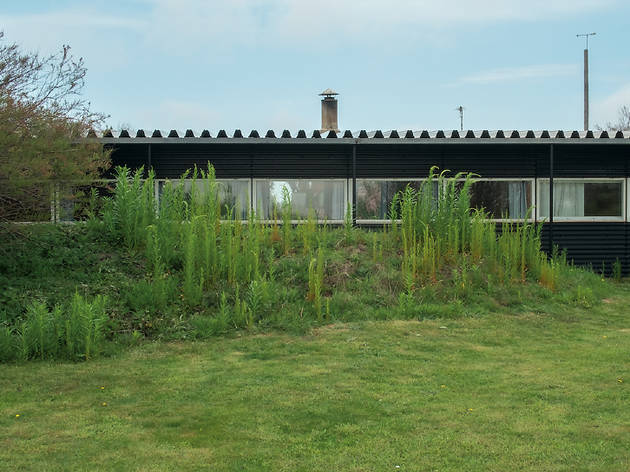 ‘After spending an influential period in the USA studying under Louis Kahn and working for Skidmore and Charles Eames, British architect John Winter returned to the UK in the late 1950s and set about designing and building his own house in Norfolk. The plot of land on which the Beach House sits had previously housed an older dwelling where Winter, his wife Valerie – a graphic artist and garden designer – and their three children would holiday.’ 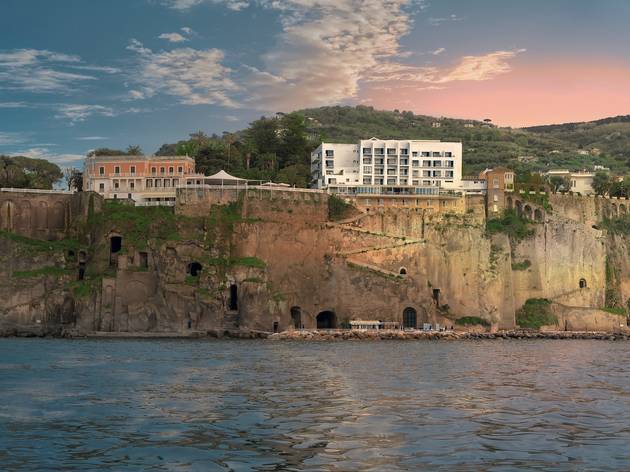 ‘In the early 1960s Neapolitan hotelier Roberto Fernandes commissioned Gio Ponti, the Italian architect, painter, poet and journalist, to design two hotels – one in Sorrento and the other in Rome. The Parco dei Principi in Sorrento has stood the test of time, and Ponti’s original design can still be enjoyed and inhabited as he intended thanks to a faithful restoration completed in 2004.’ 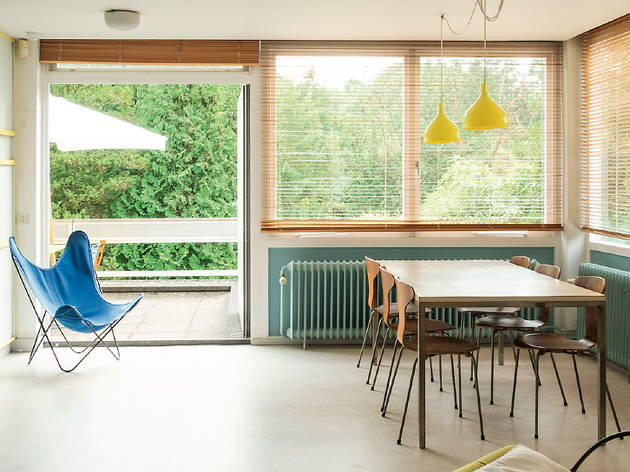 ‘This building in suburban Antwerp was designed in 1958 by architect Renaat Braem for his own use. Braem was one of the most notable figures of Belgian twentieth-century modernism and began his career as an assistant to Le Corbusier in the 1930s. In 1999 Braem donated his home and its entire contents to the Flemish Community, and it is now run as a living museum, open to the public through guided tours.’ 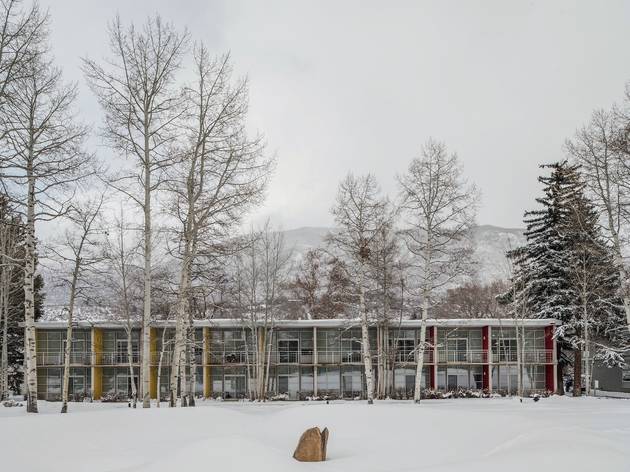 ‘Over the course of three decades, Herbert Bayer designed a collection of buildings across the Aspen Meadows campus. The Aspen Institute was the brainchild of industrialist Walter Paepcke, encouraged by his wife, Elizabeth, who wanted to establish an outward-looking cultural and intellectual organisation in the former mining town of Aspen, Colorado. Sculptures also created by Bayer are dotted throughout the surrounding landscape.’ 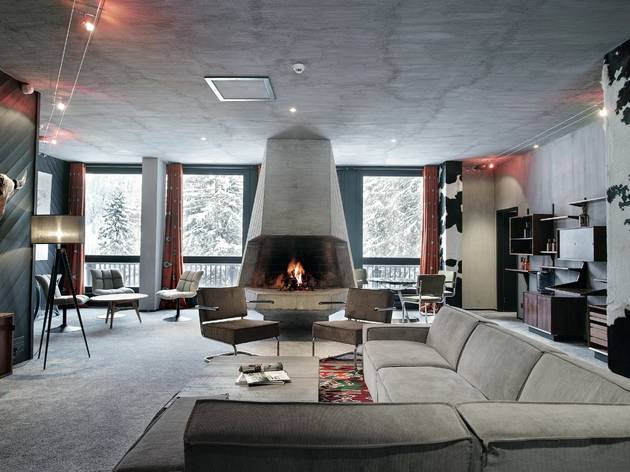 ‘In 1960, Marcel Breuer was offered the unique opportunity to build a new ski resort in the French Alps – an incredibly ambitious project, not least because of the challenging mountain terrain. The 1980s saw concrete architecture fall out of favour, and the buildings became neglected and a shadow of their former selves. With the recent resurgence in brutalism, however, new life is being brought into the resort, which has been stylishly reborn as the Terminal Neige Totem.’

‘Modernist Escapes: An Architectural Travel Guide’ is published by Prestel.

More cool buildings you should definitely check out 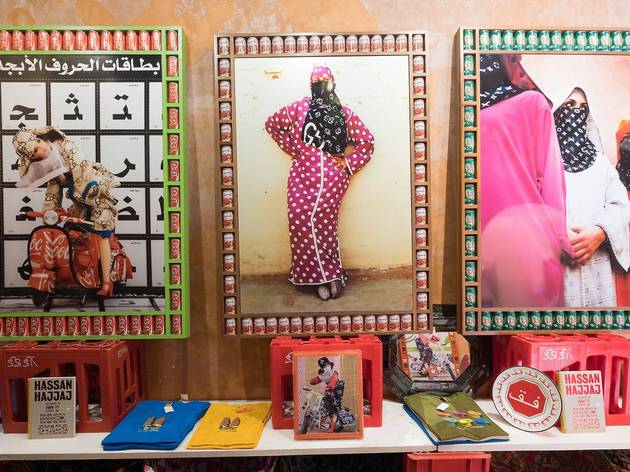