The cheapest Michelin-starred restaurants in the U.S.

Believe it or not, the cheapest Michelin-starred restaurants in the U.S. won’t break the bank

For most of us, booking a meal at a Michelin-rated restaurant is a special occasion—preferably when someone else is picking up the check. But if you’re thrifty, parsing the lauded list by price can offer surprisingly affordable options. Sure, even the cheapest Michelin-starred restaurants in the U.S. aren’t exactly cheap, but they won’t break the bank, either.

Michelin ratings come with one- to three-star symbols awarded by the French tire company (yes, the same company that brought us the Michelin Man mascot). Last September was the first time that Michelin released its famous guide since the pandemic began, and since we’re always hungry for cheap eats in the U.S., we sorted through the star-studded list to find the best restaurants offering the biggest bang for your buck.

All of our top picks can be enjoyed for under $200, and in most cases, for under $100. From Los Angeles to Chicago and New York, take a look at our list below of the best, most affordable Michelin-starred restaurants in the U.S. this year.

RECOMMENDED: the best places to visit in the U.S.

Cheap Michelin-starred restaurants in the U.S. 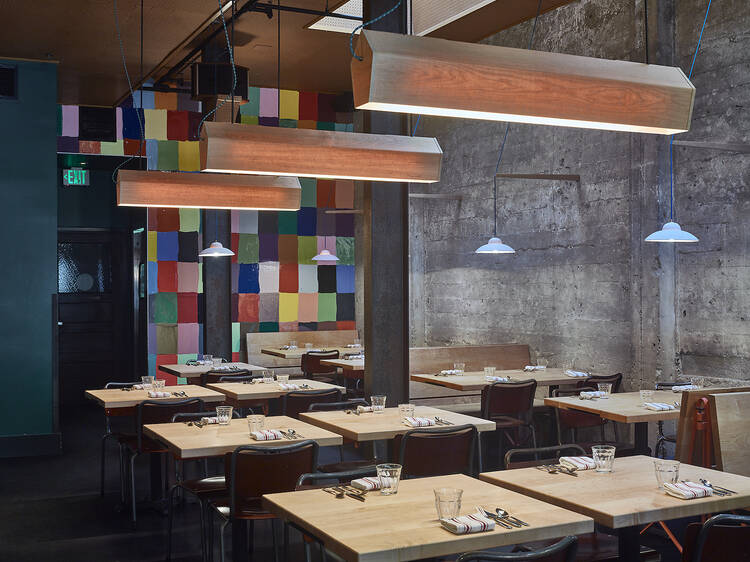 What is it? State Bird Provisions is the most affordable Michelin-starred restaurant in America (which is ironic, because it’s located in San Francisco, the second-most expensive city in the country). When it opened in 2011, the restaurant mainly focused on its signature quail recipe (still on the menu today as CA state bird with provisions) and has since evolved into an eclectic, sumptuous menu of California ingredients served dim sum-style with quite a bit of Asian inspiration.

What’s the deal? The most expensive item comes in at $45 while Michelin lists a night out averaging $25 to $90. Savory standouts include Wagyu toast, yuba and shitake inari, and Sichuan pepper-beef tongue with fried rice. 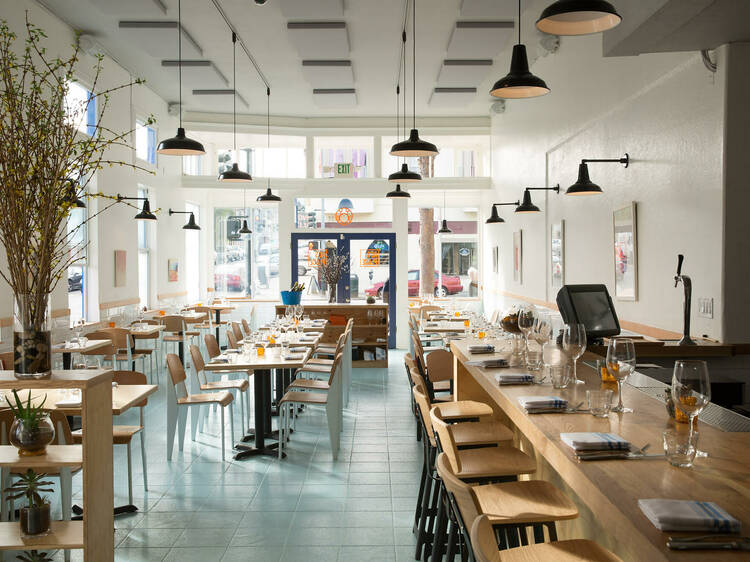 What is it? AL’s Place is a brightly lit spot with a hard-to-miss blue exterior located on the edge of San Francisco’s Mission District. The chef and owner, Alan London (the restaurant’s namesake), serves a seasonal and vegetable-forward menu that highlights local ingredients from Northern California. The majority of the produce featured hails from a biodynamic operation in Grass Valley, California, called Blue Dane Garden.

What’s the deal? Meals range from $58 to $88 including an $83 family-style serving (in which all members of the party are expected to participate) with pairings at $54. Aside from the “snackles” starters and desserts, most dishes cost between $18 and $21. Some standouts include a pear curry with lime-squids and a tagliatelle with lamb bacon, broccoli, and goat’s milk gouda (a colorful, limited menu item).

What is it? In 2016, Tail Up Goat opened in the historic Adams Morgan neighborhood in Washington, D.C. Serving up a mixture of Mediterranean and Caribbean-inspired dishes, Michelin describes the experience as having a “buzzy [mood]” that’s rounded out with attentive servers and serene watercolor murals.

What’s the deal? Each plate is about $18 to $20 and the whole meal averages about $25 to $50 total. A few dishes jump off the page like the chicken liver tart with black pepper roasted apple and shaved cabbage, crispy norwis potatoes with watermelon radish and butternut squash aioli, and rutabaga bread with beet bordelaise, baby kale, and green peppercorn. It’s best to come hungry—and ready to share your plate. 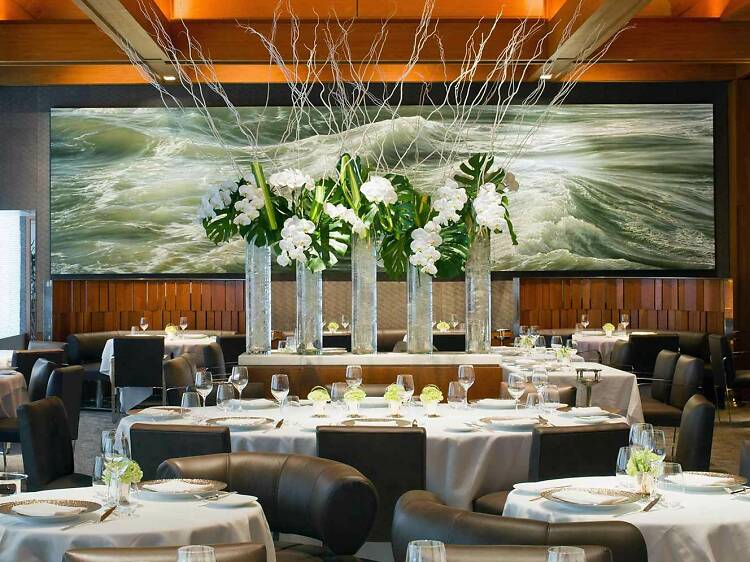 What is it? The Eric Ripert-helmed Le Bernardin is a New York stalwart and widely regarded as one of the best restaurants in the world. The interior has traditional white tablecloths and an overall sea-inspired design from the tableware to the impressive floral display in front of a 24-foot oil painting of the Pacific Ocean. When traveling to New York City, it’s a destination unto itself that delivers a “traditional” fine-dining experience.

What’s the deal? To stretch one’s dollars, we recommend making a reservation for the luxurious prix fixe lunch. This $190 four-course seafood meal will feature your choice of responsibly-sourced seafood like seared Tasmanian trout, Osetra caviar, poached lobster, and scallop with black truffle slivers. 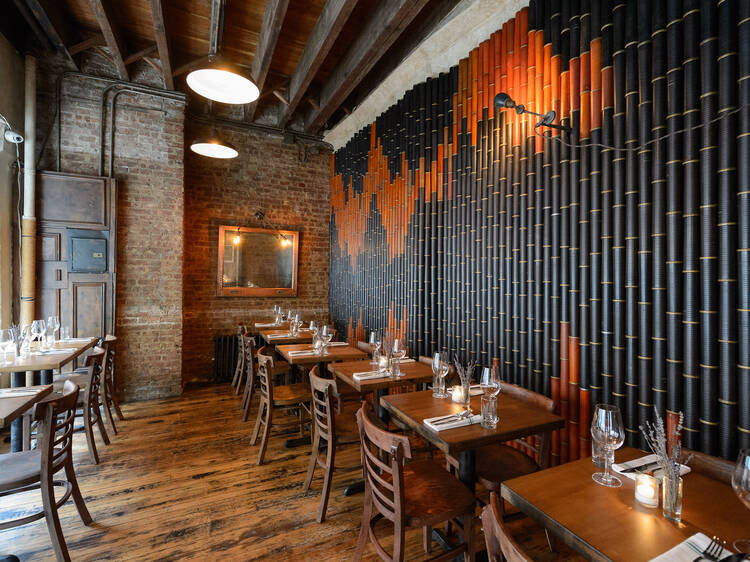 What is it? Tuome’s Chef Thomas Chen was born and raised in New York and started out as an accountant. As an Eleven Madison Park alum (ahem, one of New York’s most expensive restaurants), Chen opened Tuome in 2016. An average meal ranges $50 to $75 and a mouth-watering menu draws on Asian inspiration—dishes are accented with ingredients like yuzu, New York maple syrup, and maitake mushrooms.

What’s the deal? Any meat eaters among us? Spring for the "Pig Out" meal for two. At $61, it’s an economical choice: the meal includes beautifully plated Berkshire pork belly that's confited in duck fat for 15 hours and served with spicy peanut noodles. 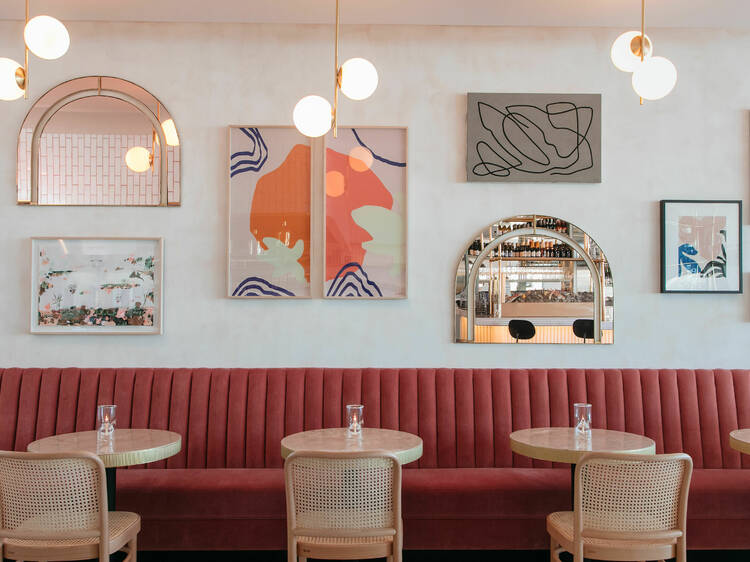 What is it? About 40 minutes north of San Diego is the adorable Jeune et Jolie, a newly Michelin-minted French restaurant. If you didn’t pay attention in French class it means “young and pretty,” and the restaurant lives up to its name. Inside, the retro and art deco-inspired decor includes a velvety rose-colored booth with matching stools, small round tabletops, a gold-tinged bar, and a beautiful open kitchen with pastel colored plates on display.

What’s the deal? The menu is a $95 four-course meal with a range of dishes that feature eclectic ingredients like kohlrabi, bone marrow, and pepita that top proteins like monkfish, veal sweetbreads, and Liberty Farms duck. Add a wine pairing for $70 and the total is still under the cost of most Michelin-starred restaurants. Keen to top it all off? Le menu de bar features seasonal cocktails and Absinthe libations served “traditional” or frappe. 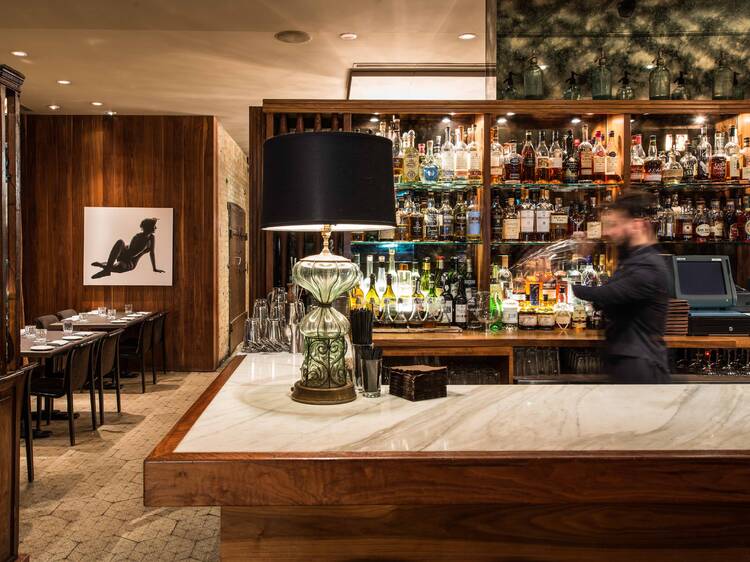 What is it? According to the Michelin entry, this contemporary American restaurant in Chicago is “housed within a historical 19th-century print shop.” Executive Chef Andrew Zimmerman has been the creative vision behind Sepia since 2009, and his hard work paid off: it has received a Michelin star rating every year since 2011.

What’s the deal? While dishes average $24 to $75, the prix fixe menu will only set customers back $85 total (plus an additional $55 for wine pairings). The prix fixe includes choice options like a foie gras tart, crab etouffee, and a venison shabu-shabu. Even dessert is irresistible with savory and sweet flavor combinations like a brown honey butter biscuit with pickled onion jam and a chocolate coffee semifreddo that features tonka bean, salted almond, and burnt honey caramel. 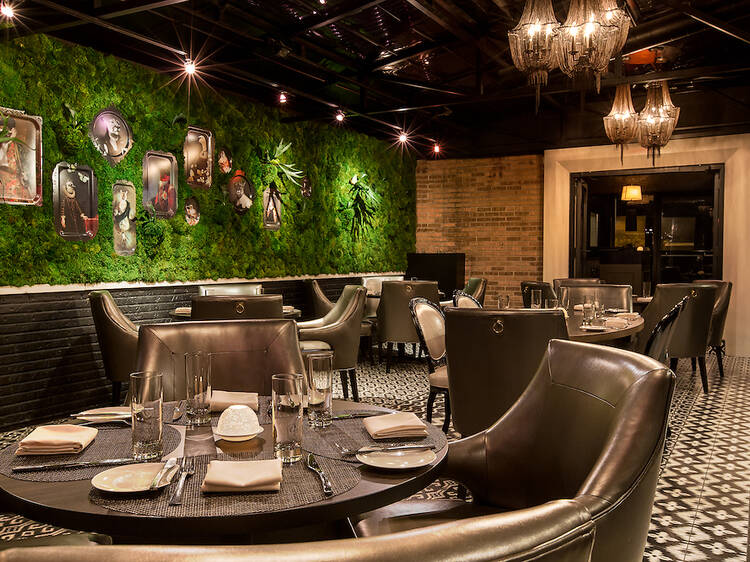 What is it? Boka has racked up numerous accolades since opening its doors 18 years ago, including a consistent Michelin rating for the last 10 years—without question, it's a staple in Chicago’s fine dining scene.

What’s the deal? Lucky for us, Boka has not one but two multi-course prix fixe meals for under $200: a five-course meal for $95 and an eight-course meal for $165. Entrees change frequently but according to both the Michelin guide and Redditors, the Rohan duck (which is roasted and dry aged) is hard to beat. 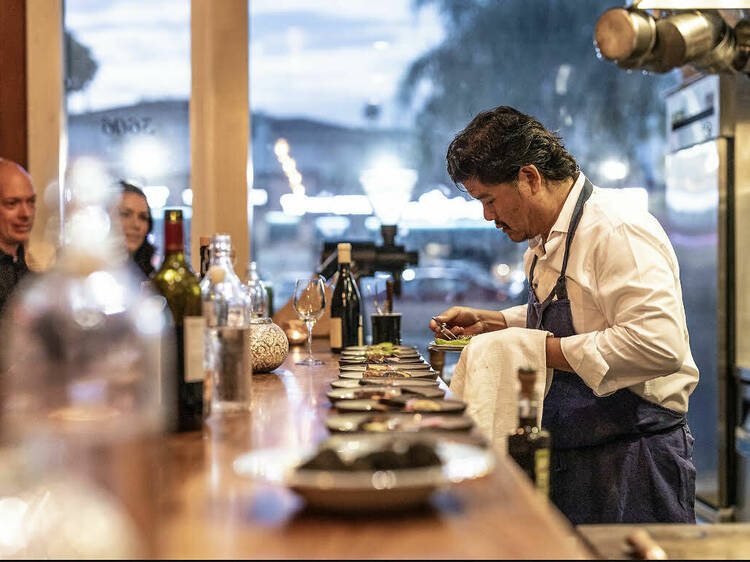 What is it? Le Comptoir features “an 8-course vegetable-inspired tasting menu that showcases seasonal ingredients sourced from our very own organic kitchen garden and local farmer friends,” reads its website. With only 10 counter seats, Le Comptoir can be found inside Hotel Normandie within Los Angeles’ Koreatown.

What’s the deal? While the $175 price tag for its prix fixe menu is a little on the pricier side compared to our other picks, the seasonal, veggie-forward courses are sure to delight the senses.