Time Out Bangkok's guide to where to eat in Phuket

Phuket has long been praised for its culinary culture, which highlights the province’s distinctive Phuketian Peranakan cuisine—mainly a blend of Thai, Malay and Chinese cooking—and is now being elevated by the influx of fine-dining restaurants. The city was put in the spotlight last year after it was recognized as a City of Gastronomy by UNESCO (the first time an Asian city was given this prestigious status). This year, Phuket’s culinary offerings come under scrutiny once again as the city becomes the new playground for Michelin inspectors testing its culinary offerings for the launch of The Michelin Guide Bangkok, Phuket, and Phang-nga 2019 happening in November this year. In celebration of Phuket’s shining moment, Time Out Bangkok travels to the resort town to check out its best restaurants and eateries. 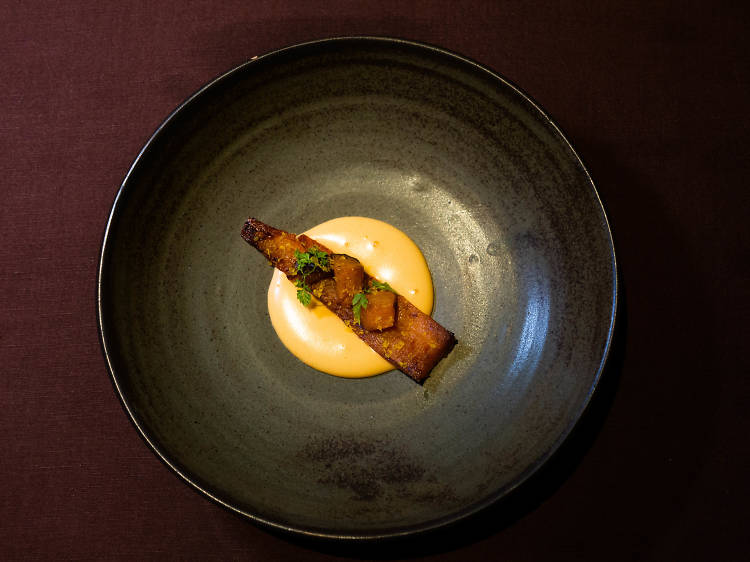 While fine-dining chefs normally scramble to make the most out of pricey imported ingredients, Jim Ophorst, the chef de cuisine of Pru restaurant in high-end resort Trisara, is one of the few culinary masters in Thailand that creates Michelin star-worthy culinary wonders out of seemingly “ordinary” produce. The secret to Chef Jim’s elevated fare lies in his holistic approach to cuisine and his source of ingredients. Pru gets most of its produce from Pru Jampa, a farm by Trisara that cultivates seasonal vegetables, herbs and flowers, and sources proteins directly from local farmers and fishermen engaged in sustainable processes. 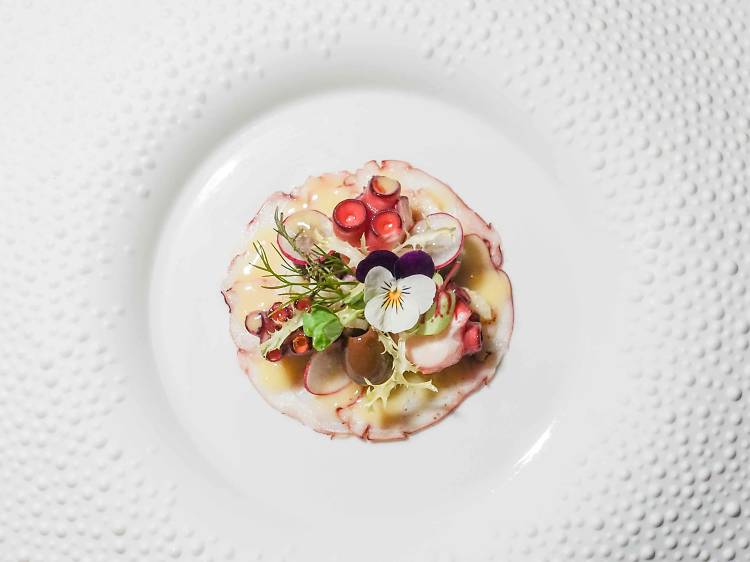 Sardinian-born chef Alessandro Frau is credited for starting the “molecular” and “modern” dining trend in Phuket decades ago at his fine-dining Italian institution Acqua, even before these became trendy in the global culinary scene. Drawing in both devotees that cherish authentic Italian tastes and adventurous epicureans obsessed with modernized gourmet fare, Acqua reinvents centuries-old recipes into mind-blowing creations that still retain traditional Italian flavors. And we haven’t even mentioned the wine list. The restaurant boasts the city’s most impressive list of reds and whites, with over 450 selections of fine wines and vintage bottles. This massive selection always qualifies Acqua as a contender in the annual Wine Spectator’s Award of Excellence. 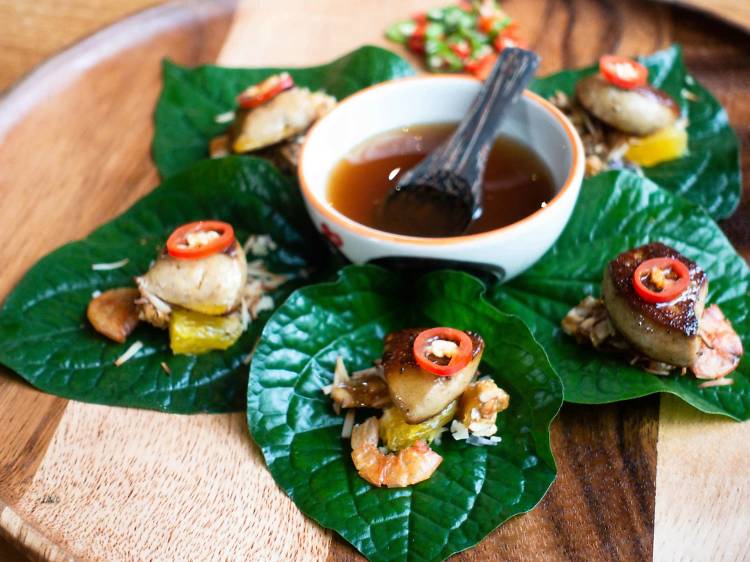 Suay means “beautiful” in Thai, and this is evident in the gorgeous details (think floral furniture, houseplants and lush gardens) that dominate both Suay restaurants in Phuket Town and Cherng Talay. For almost a decade, chef-owner Tammasak Chootong, who honed his culinary skills at Michelin-starred kitchens in Germany, has been serving modern Thai cuisine in these stunning surrounds. Expect modern Thai creations made using Western cooking techniques and international ingredients. 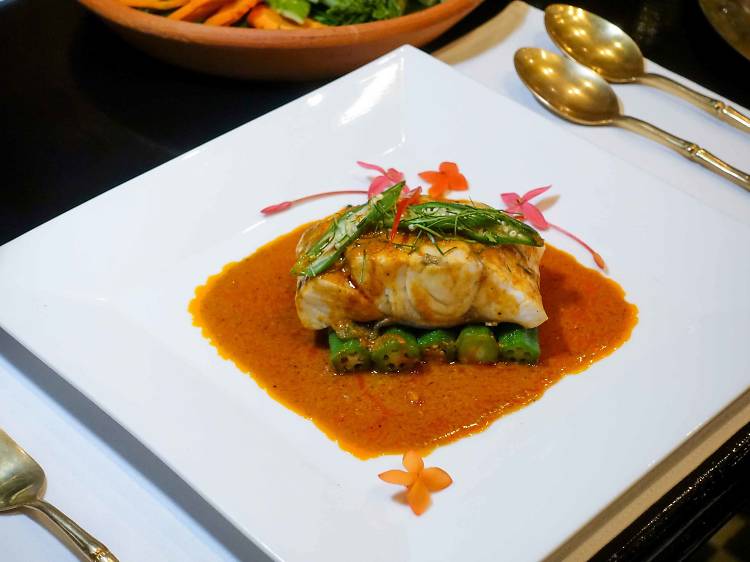 Nooror Somany Steppe, an unofficial ambassador for Thai cuisine and the founder of Blue Elephant restaurants, has a keen set of eyes when it comes to selecting a location for each of her restaurants. Just like her Bangkok restaurant, which has become a landmark in Sathorn, the latest Blue Elephant outpost in Phuket is elegantly set in a refurbished Sino-Portuguese mansion that was once was the residence of Phra Pitak Chinpracha, a Chinese merchant who was in charge of the province’s tin mining industry during the reign of King Rama V. Apart from serving the signature dishes offered at all Blue Elephant restaurants worldwide, the Phuket outpost of Blue Elephant has perhaps the most impressive list of Peranakan staples in all of Phuket, courtesy of a collaboration with a Peranakan association and Rajabhat Phuket University. 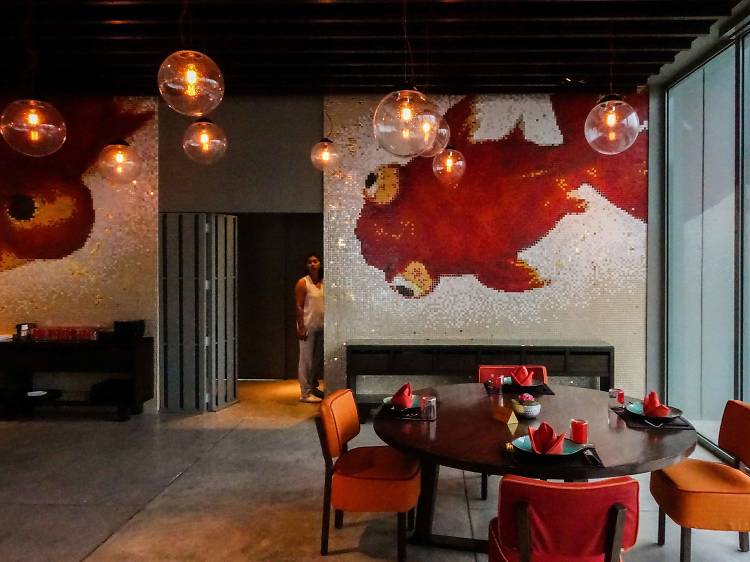 The two COMO hotels in Thailand have restored our faith in Thai restaurants under the steering of five-star hotels. While Nahm at COMO Metropolitan Bangkok has become a worldwide sensation for its authentic Thai cuisine, Nahmyaa at COMO Point Yamu, its counterpart in Phuket, has become renowned for delivering impressive and uncompromising southern Thai favorites. The traditional Thai influences extend to Nahmyaa’s interiors. Renowned Italian designer Paola Navone has borrowed the bright orange hue of Buddhist monk robes to decorate the entire restaurant, as evidenced by the cheery hues of the upholstery and the goldfish made with mosaics that dominate the restaurant’s walls. 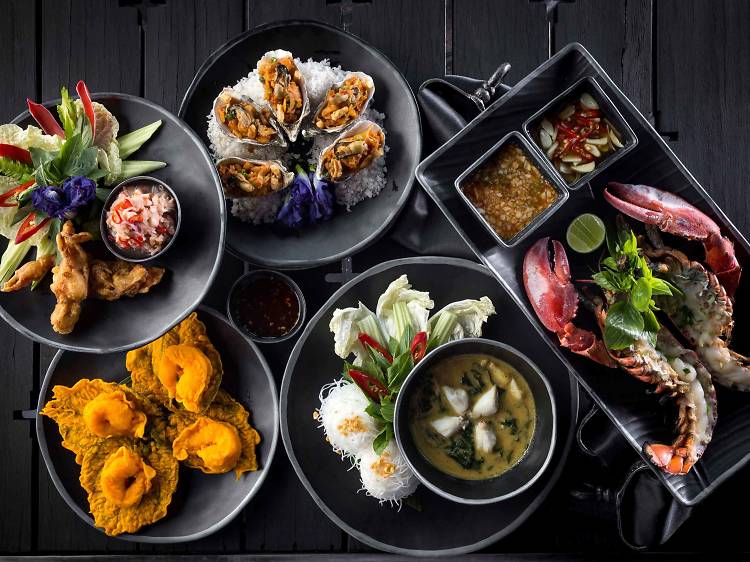 If there’s one fine-dining Thai restaurant that we love in Phuket, it’s Black Ginger at The Slate hotel. A meal at this stunning dining destination is definitely one for the books. A complex of all-black wooden Thai pavilions that’s only accessible via a man-held raft is one thing; embellished interior decorations that make you feel like you’re inside an exotic temple is another. Not to mention chandeliers that glitter like stars in the dark sky and staffers clad in costumes inspired by ancient Phuket fighters. And the food? Well that’s definitely something else. 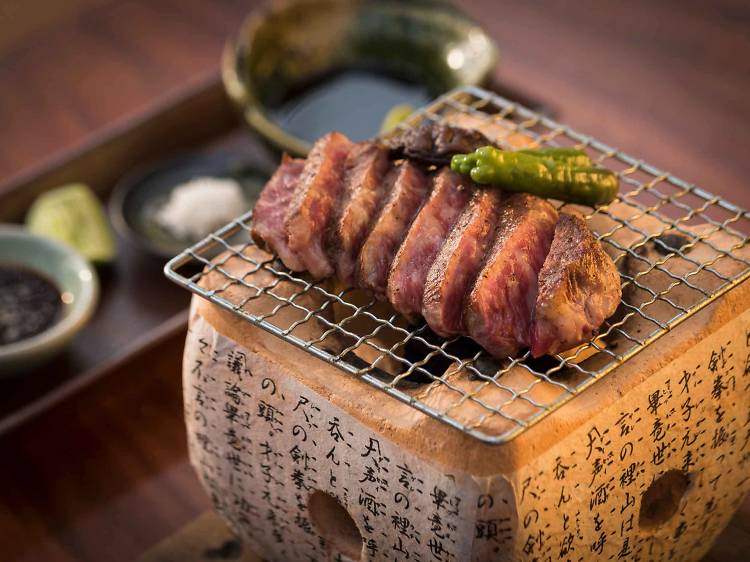 Options for fine-dining Japanese fare on the island are limited, which is why we’re stoked that the exquisite Amanpuri resort has recently unveiled a highend Japanese restaurant on its premises. Nama, which means “raw” in Japanese” (it’s also “Aman” jumbled up), introduces the culinary philosophy of washoku to Phuket. This traditional Japanese concept emphasizes the simplicity that’s intrinsic in Japanese aesthetics as a gateway to a kaleidoscope of flavors. Under the guidance of Japanese chef Keiji Matoba, the kitchen creates amazing seafood dishes made with produce flown directly from Japanese markets, as well as carefully selected local ingredients. 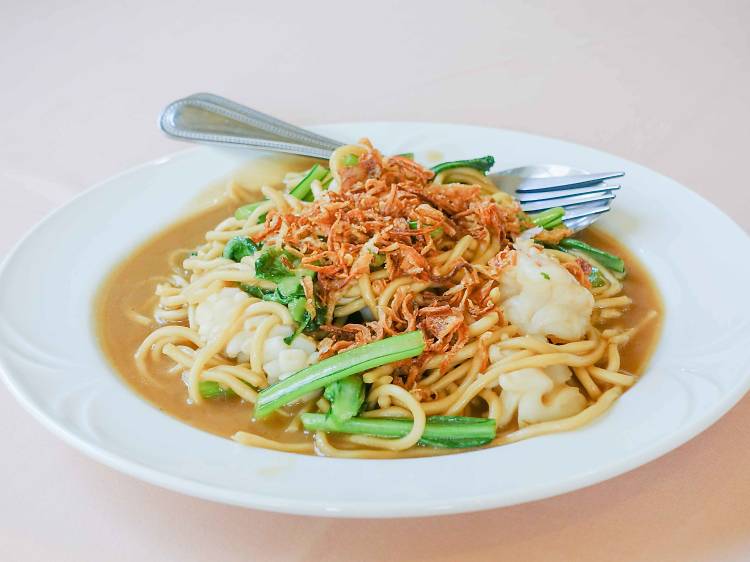 Ask around Phuket Town for the best restaurant to savor the local specialties and Raya will most likely be the quick recommendation. Tucked in a Sino-Portuguese mansion, Raya is a two decade- old restaurant run by Phang-nga-born Phuket local Gularb Jedsadawan. Surrounded by lush gardens, the wooden two-story restaurant features a non-airconditioned dining room clad in yellow hues and furnished with antique trinkets and colorful Portuguese-style tiles. The menu is a long list of Phuket specialties that make use of high-quality ingredients (which partly explains why most of the dishes are priced higher compared to similar restaurants in the area). 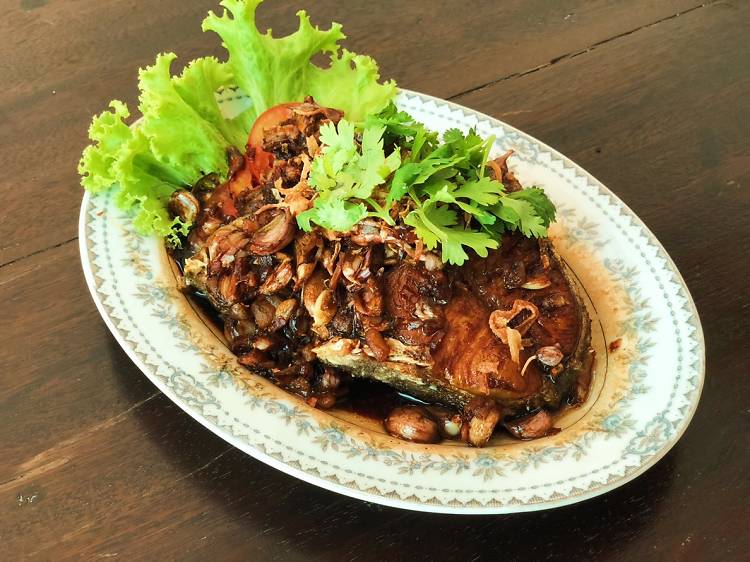 Phuket has long been called the Peranakan capital of Thailand. Sadly, there is a dearth of restaurants serving authentic Peranakan fare (a cuisine invented by Straits Chinese who lived in merchant cities in the Malayu Peninsula, including Phuket, Malacca, Singapore and, most importantly, Penang). It’s the type of home-cooked cuisine Phuketians of old would eat within their walled rowhouses. The Charm fills in the gap as one of the very few, if not the only, Peranakan restaurant in Phuket town. 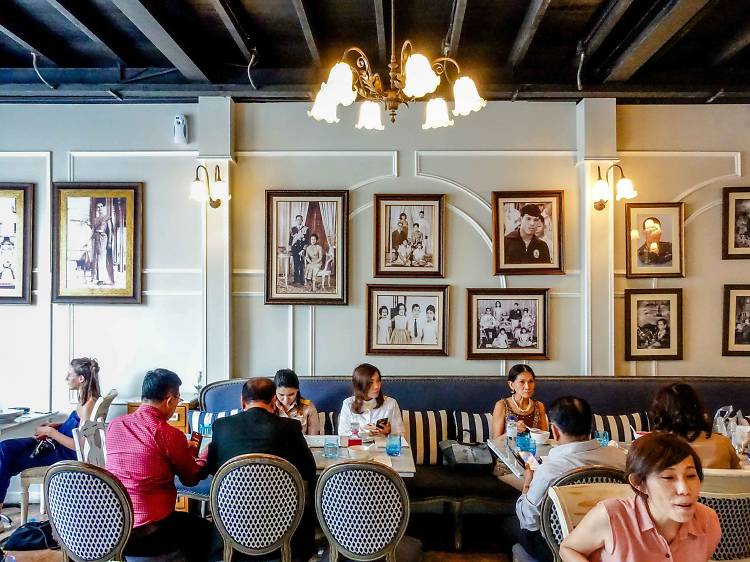 Long before refrigerators, there was the tu kap khao, a Thai-style food cabinet where parents kept drool-worthy treats to be enjoyed by the family. Memories of this antiquated appliance from his childhood was the inspiration for Teerasak Pholngam when he opened up Tu Kap Khao, a popular restaurant in Phuket Town that highlights recipes created and curated by his mother Lingee Somsak. The restaurant sits in a photogenic, white-washed setting set off by vintage-style, earth-toned furniture. 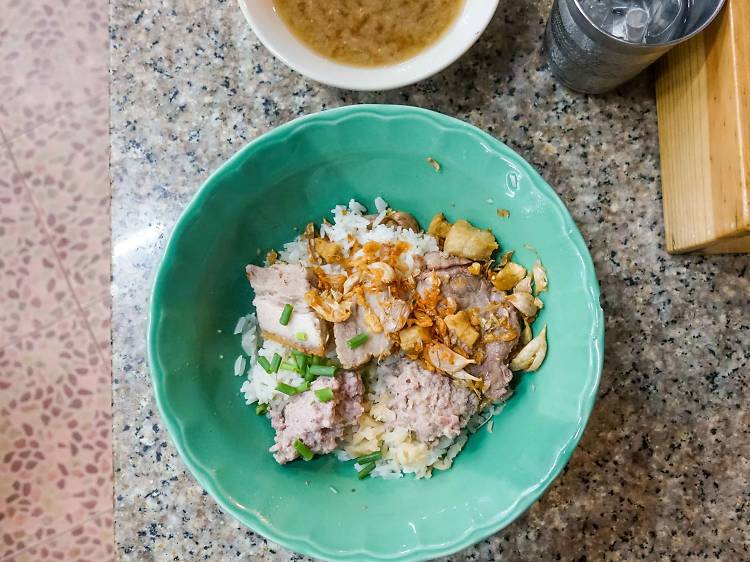 You would need to brave the long queue that starts snaking around the block hours before the restaurant opens to discover what the fuss is all about at Ko Benz. The decade-old street eatery is famed for its khao tom haeng (brothless porridge), which is cooked according to an old family recipe. Located opposite Jo Ong shrine in Phuket Town, Ko Benz is packed every night with both locals and tourists. 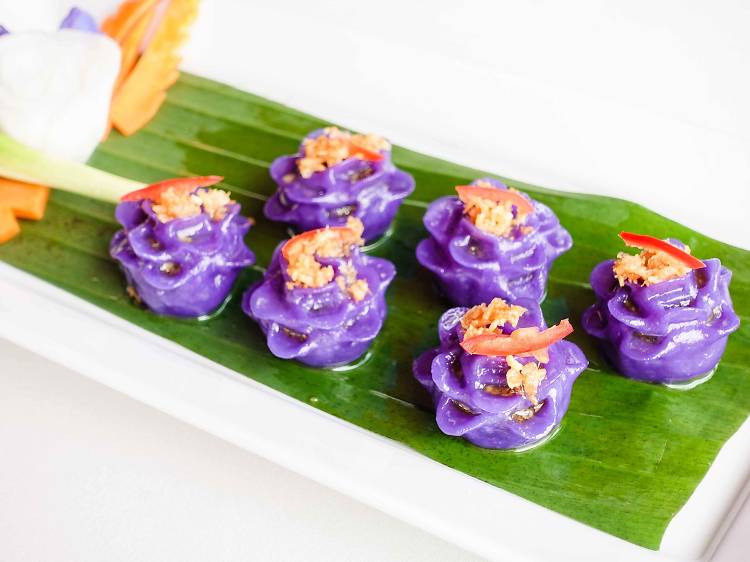 Baan Rim Pa is a dining fixture on Phuket’s tourist-friendly coastal stretch. Both the Patong and newly opened Kalim outlets are housed within traditional two-story teak houses with terraces that look out to the sea. Big wooden tables and heftily portioned plates make Baan Rim Pa a family-friendly choice. 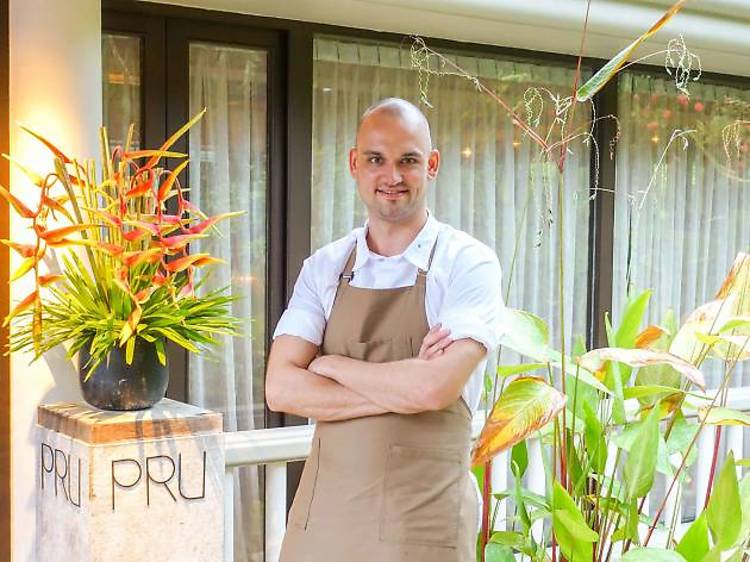 “If you look back five years ago, it has improved 100 to 200 percent. If you talk about fine-dining, there was only Acqua. But there have been other chefs who have come to Phuket to open restaurants and set the standard of the food a little higher. The local cuisine in Phuket is one of my favorite cuisines in all of Thailand.” 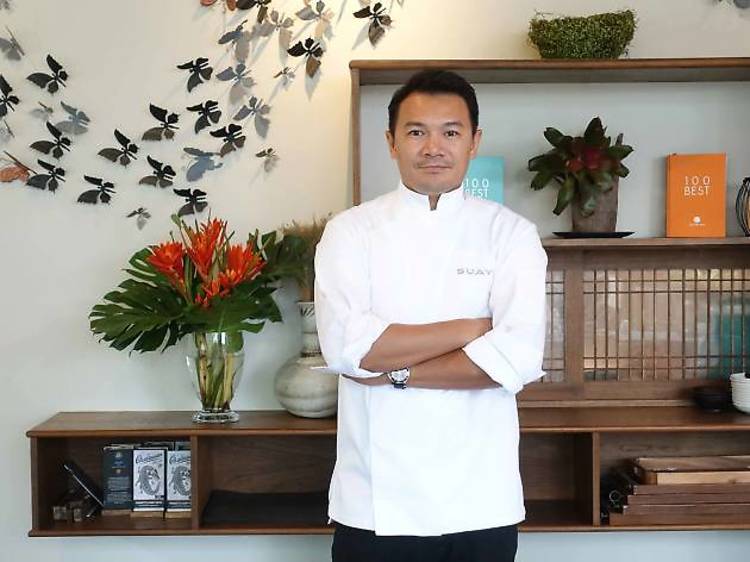 “Phuket has always been a gastronomic destination for in-the-know foodies since it has a variety of local eateries and fine-dining establishments. The launch of The Michelin Guide Bangkok, Phuket, and Phang-nga 2019 will help Phuket become an even more popular food destination.” 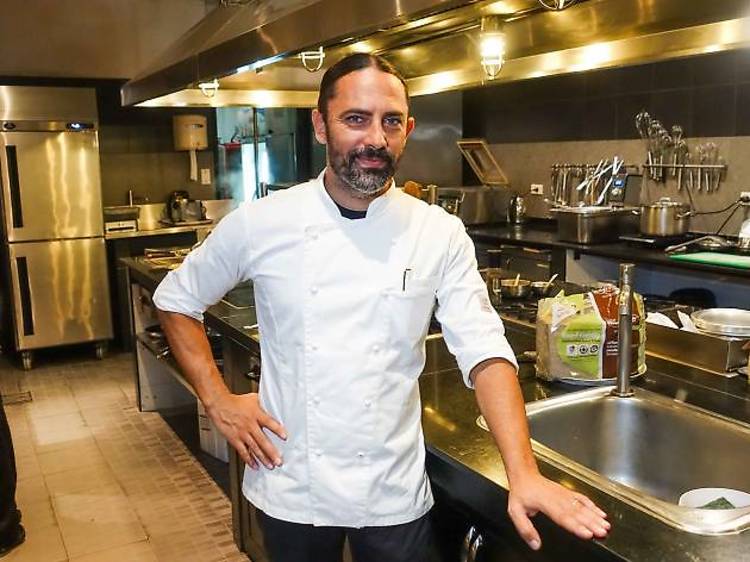 “Phuket’s food scene is still developing. There is not enough passion in the overall dining scene. Maybe with Michelin coming, the whole scene will improve. We need more time and more chefs with passion to come to Phuket and elevate the food culture.”