Split has been deftly transformed from an ailing port town into a chic seaside resort. The arrival of UberBOAT heralds a smart new alternative to island-hopping by ferry or a privately booked speedboat

Each summer, swarms of tourists descend upon Split, the main departure point to the islands of Brač, Hvar and Vis. No longer just a gateway to the illustrious islands, Split’s popularity has mushroomed into a tourist industry entirely of its own being. And it’s not hard to see why. 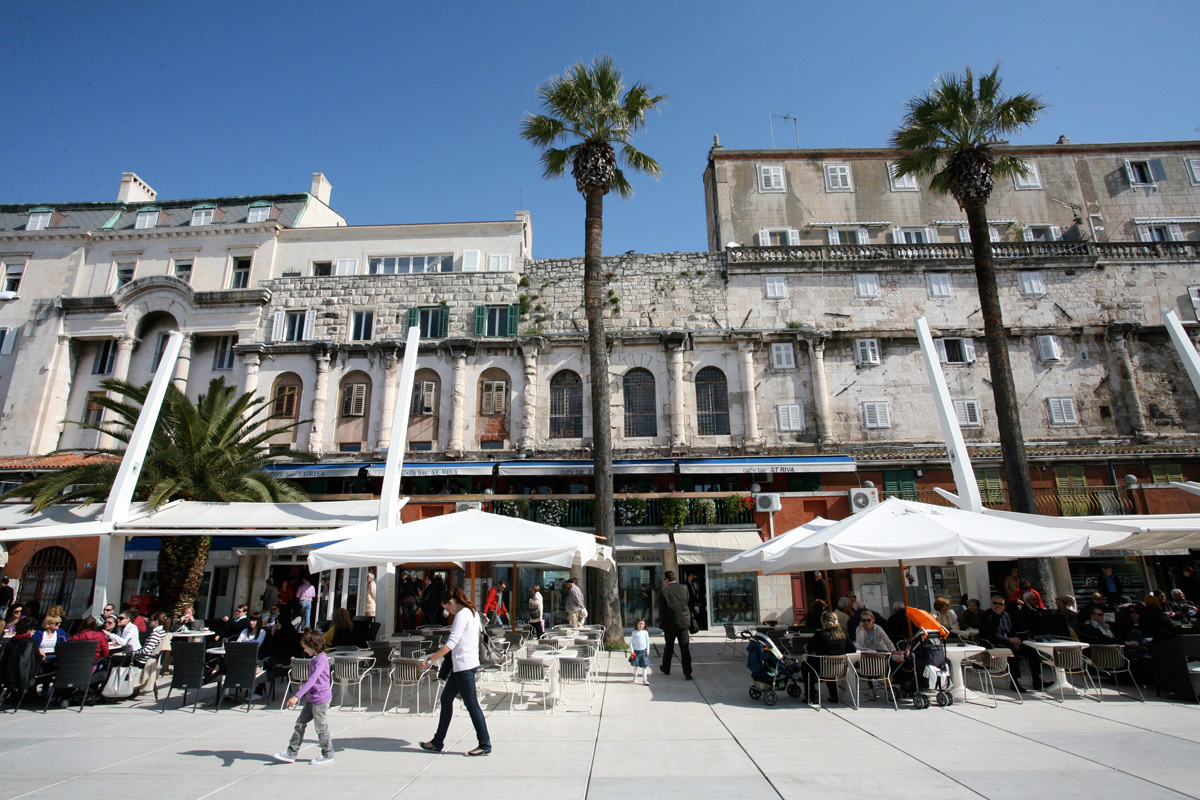 Split’s dazzling array of antiquities set a wonderful contrast to its vibrant street-life and contemporary restaurant and bar scene. The beating heart of the city, Diocletian’s Palace, is a maze of ancient cobbled streets lined with thoroughly modern restaurants, bars and businesses. It's what makes Split so seductive: you’d be hard-pressed to find a more handsome example of urban living in Dalmatia.

With the arrival of UberBOAT – an on-demand speedboat service that’s just as easy as hailing a cab home after a night out, you can take in all the city has to offer at your own pace – before jaunting off to the sparkling pearl necklace of Adriatic islands Šolta, Brač, Vis and Hvar.

Once you request a boat for between eight and 12 passengers, the app guides you to a nearby pick-up point where your captain will be waiting.

There are two services to choose from: you can glide off to the nearby islands, or book your boat for a half or full day's worth of adventuring. The fare for the transfer from Split to Hvar on an 8-passenger speedboat is HRK 2,600, while a larger speedboat that fits up to 12 passengers is priced at HRK 3,300. 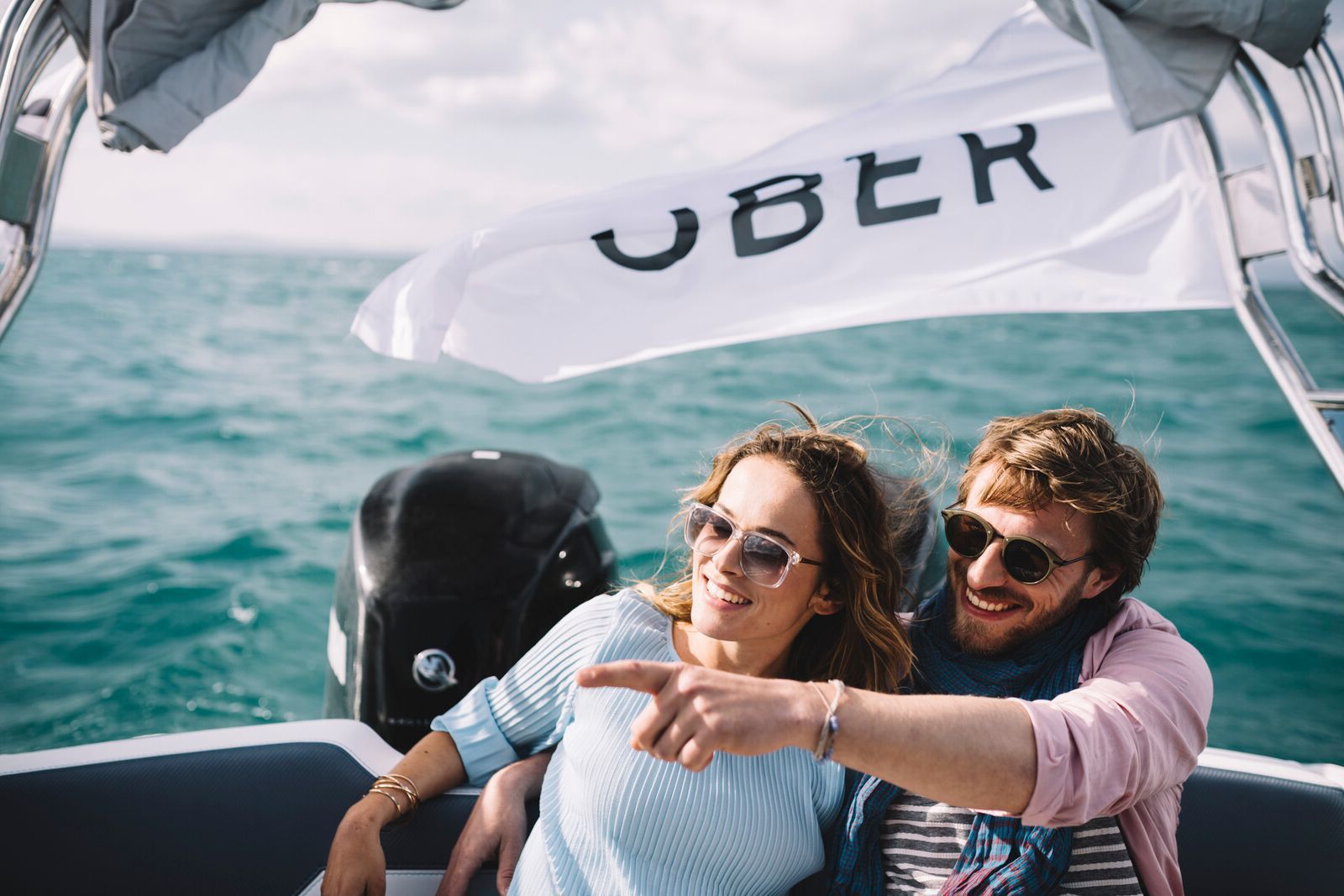 With the half-day or a full-day option, you can design your own itinerary. Like it’s land-based counterpart, you can also divvy up the fare with other holidaymakers to make the journey cheaper.

Split’s main transport hub is notoriously headache-inducing. The train station, bus station and ferry port are tightly clustered together at the end of Riva Bay. Travellers are squeezed for space, clamouring along a thin pavement that’s fringed with sunglass-sellers, tacky souvenir shops and fast-food joints.

Instead of rushing here to catch a public ferry or trawling the pier to negotiate a private speedboat, you can take to the seas in a matter of minutes with UberBOAT. It’s never been easier to go island-hopping. 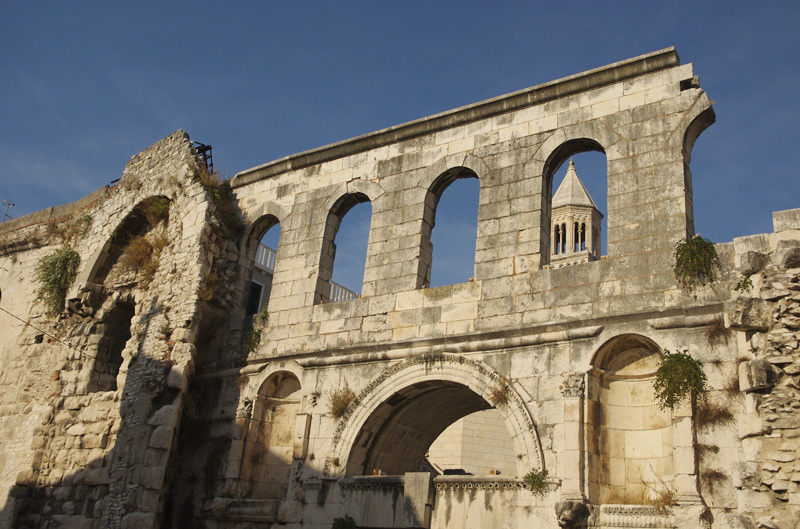 In Split, the white-stone lattice of Diocletian’s Palace is a constant throb of social activity, where high-street brands rub shoulders with century-old konobas; travellers wend their way around its bewildering maze, while locals spend their lunch-breaks sipping coffee on smoke-filled terraces. At Split’s daily market, traders from all over Dalmatia lay out a vibrant array of fresh fruit and veg and caught-that-day fish, as well as inflatables, towels and whatever essentials you may need for the sandy beach just ten minutes walk away. 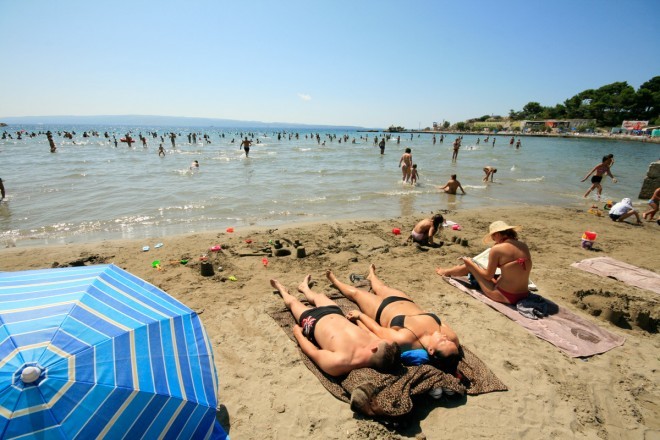 The seafront Riva, a palm-studded promenade that rings around the Old Town, offers spectacular views across the harbour to glittering islands. Cafes and fish restaurants line the western side of the port, while the transport hub and market occupy the east. 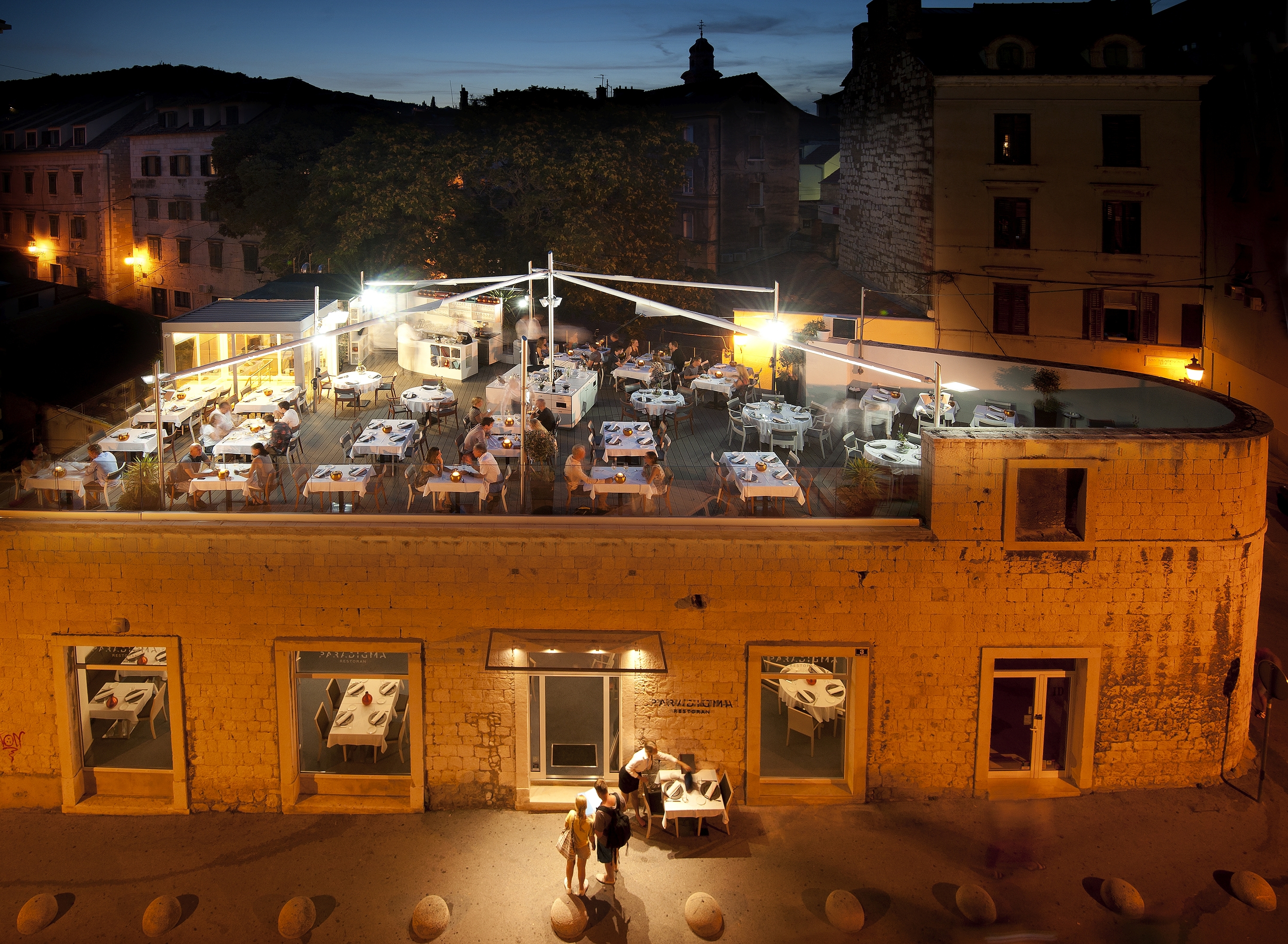 The beauty of Split is found in meandering along its cobbled alleyways, and dipping into the bars nestled in the caverns of the palace. Certain bars stand out amid the blur – though whether you’ll be able to find them the next night is another matter. In fact, retracting your footsteps, or trying to, is half the fun. In any case, do look out for Figa, Gaga, and the long-established Academia Ghetto Club.

Once you’ve got your bearings in Split, it’s time to take to the seas.

Despite being one of the closest islands to the mainland – less than an hour– and prime candidate for the most popular, Brač gives you the option to carouse with the hordes or be lost in solitude. In many ways, Brač is Croatia’s everyisland. 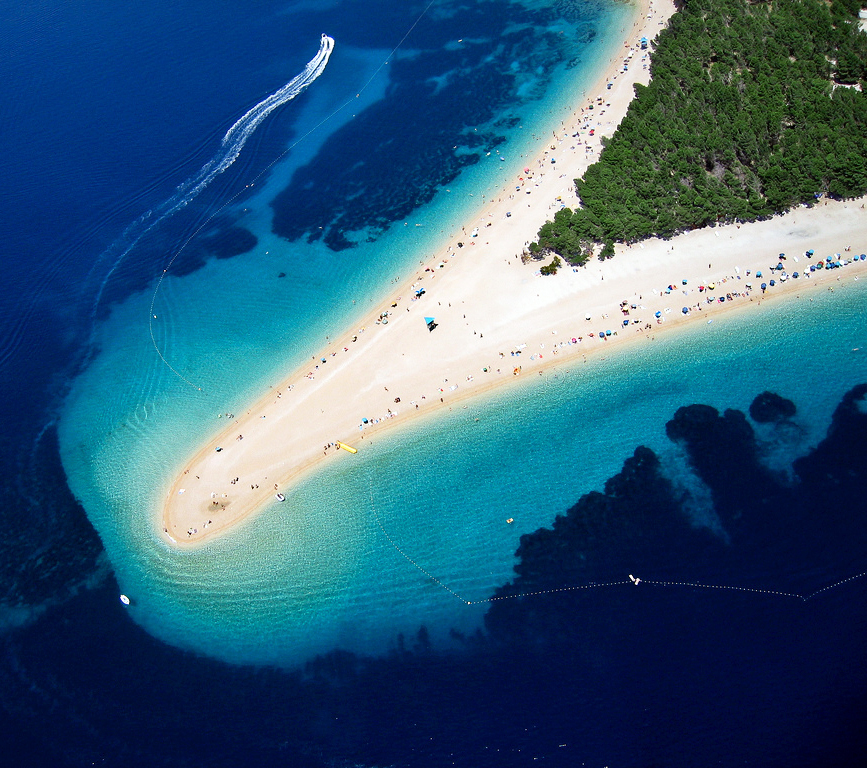 In Bol, it has a town where you can grab a lively cocktail and head to the island’s postcard shot, the country’s most famous beach, Zlatni Rat, windsurfing central. From Bol you can trek to the area’s highest peak, the 778-metre Vidova Gora, or investigate remote and traditional villages, where donkeys still work the rugged landscape to transport grasses, grapes and olives. And, because Brač is so close to Split, you can do it in a day trip with UberBOAT.

Next in the chain of islands is Hvar. Holidaymakers come to be around the yachts lined along the harbour of the namesake capital and among the revellers forking out more than top dollar to party into the night. 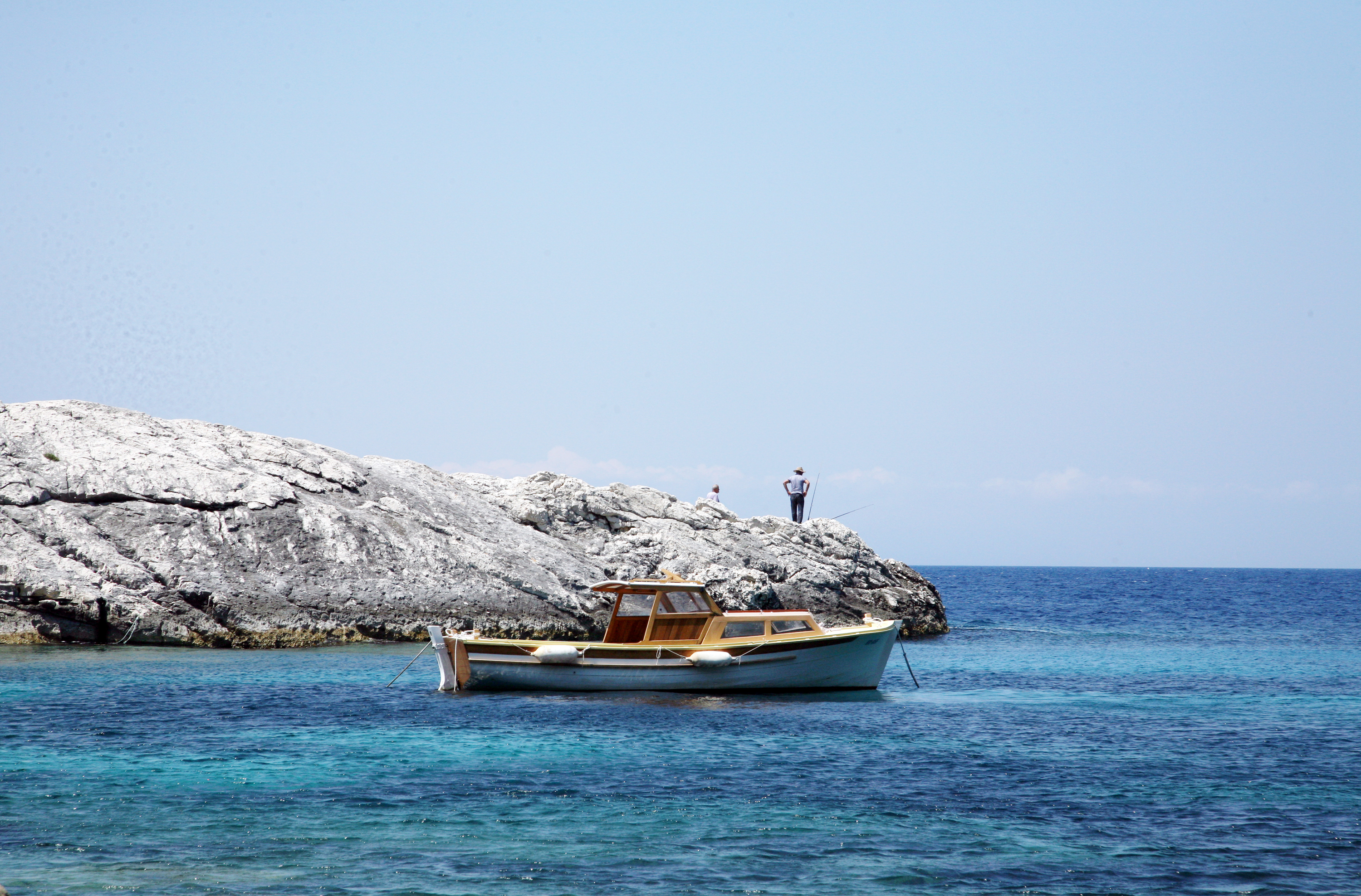 The hub of it all is Hvar town harbour. In high season this pretty, petite Venetian capital of 3,000 locals on the island’s south-west tip overflows with hoards of visitors every day. They swarm the attractive waterfront and adjoining main square, Pjaca, doing coffee, the nearby market and the modest sights by morning, the beach by day and the bars by night. Prices now match those of fashionable hotspots elsewhere on the Med.

The Glavića peninsula and the nudist beach on nearby Zečevo island offer far-flung seclusion - only accessible via boat. The beaches of the Pakleni islands, in particular, the sandy one at Palmižana, are well worth the journey.

The furthest island from Split, Vis has a special place in the hearts of many Croatians, who consider this a truly unspoiled example of the best of the Dalmatian coast. Its designation as a military base under Tito froze development for more than 40 years, allowing farming and fishing to remain the dominant activities.

Now tourism is taking over this remote island, one of the farthest from the mainland in Croatia. Vis has become a hot destination among those in the know who want a quiet getaway amid a gorgeous patch of clear sea, which provides great fish, swimming and diving.

Set on the east coast of Vis, the Blue Cave (Modra šplija) is accessible by sea from Komiža. With the sun gaining height, it shines through the waters of a submerged side entrance and the cave is bathed in a fabulous blue light. 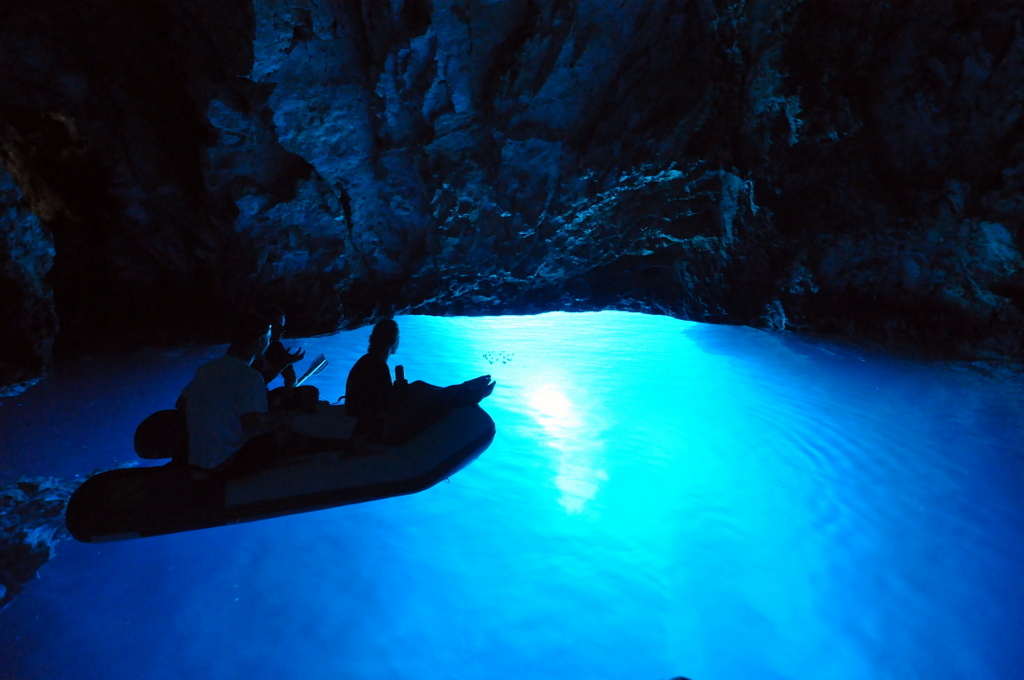