Should the brisk north winds leave you in the mood for a day trip out of town, you’re in luck. While big, proud Hamburg is no doubt the major North German metropolis brimming with attractions and things to do, there are several superb destinations just an hour or two from the city—not least its Hanseatic sisters of Bremen and Lübeck, and picture-perfect Lüneberg, one of the best-preserved medieval towns in the country. For a dose of fresh air and forest, don’t miss the fairytale lake Schloss of Schwerin, or hire a bike and pedal through the apple, pear and cherry trees of the Altes Land, the North German answer to agri-tourism. 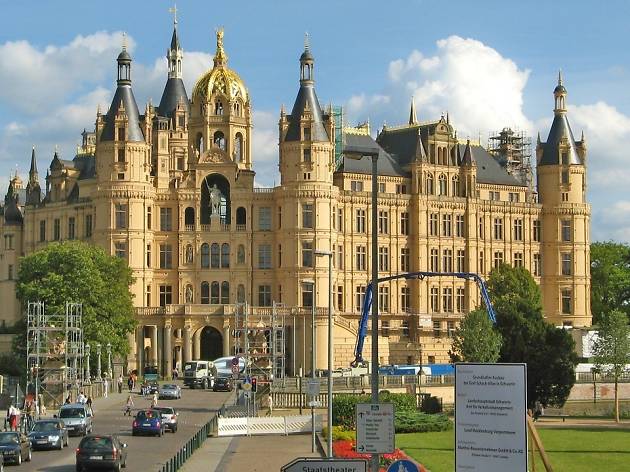 The Schwerin Schloss, nicknamed the “Neuschwanstein of the North,” counts among the most spectacular of Germany’s famous castles. Set on an island in the Schweriner See (not a misspell of “Sea”—this is how the Germans say Lake Schwerin!), the palace is as stunning in its location as in its vast and gilded grandeur. A lavish example of Romantic historicism, it was built between 1847 and 1851, though there are traces of earlier fortresses on the same site dating back to 942. Long the stately residence of the dukes and grand dukes of Mecklenberg, the Schloss today houses the state parliament, but leaves several of its historic rooms, as well as its impressive formal gardens, open to the public. You can reach Schwerin in one and a half hours via regional train.

For an elegant light lunch and fine array of Kuchen, look no further than Café Prag, a classic café just five minutes’ walking distance from the Schloss.

Enjoy a glass of wine with a fairytale view at the Ruderhaus, a sleek bar and bistro with one of the best views over the lake and island castle.

A former 18th-century wine store house, Weinhaus Uhle combines historic charm with pristine contemporary comfort. Its restaurant, beneath a coffered and vaulted ceiling, is one of the best in Schwerin.

Schwerin’s Galerie Alte & Neue Meister is an eye-popping testimony to the city’s historic prosperity. Its collection boasts a dazzling run in 17th and 18-century Dutch and Flemish painting, important pieces by Caspar David Friedrich and Max Liebermann and no less than 90 works by Marcel Duchamp.

Have a coffee at the Schloss Orangery. It’s got plenty of palatial elegance and great views over the lake and gardens. 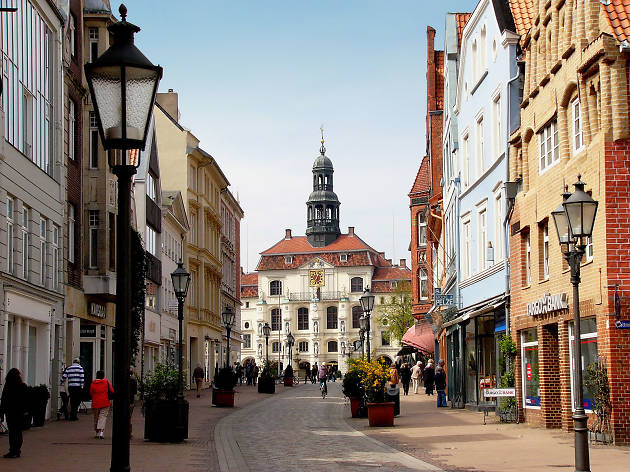 Charming little Lüneburg is one of those rare, extremely well-preserved German towns that recall quite how much the country lost architecturally in the ravages of the Second World War. Sat serenely on the river Ilmenau, just a 30-minute train ride south east of Hamburg, Lüneburg made its money by mining salt, which also explains the tilt and warp of many of its medieval buildings—the ‘white gold’ industry made Lüneburgers enough money to build beautiful houses, but the mining also created serious subsidence. While the wobbliness is closely monitored for health and safety, it generally adds to Lüneburg’s charms, with almost every corner of the inner Altstadt a picture-perfect run of cobbled alleyways, half-timber houses and volute gables.

Get a pintful of tradition at Krone, Lüneburg’s oldest pub dating back to 1485.

See the impressive 14th-century church of St. Michaelis. Johann Sebastian Bach was a pupil and chorister here between 1700 and 1702.

With an idyllic waterfront setting, Hotel Bergström matches its top Altstadt location with four-star comfort, including pool and spa.

Admire the Lüneburg Town Hall, a remarkable composite of buildings from the 13th to 18th centuries. The Great Council Chamber is a Renaissance masterpiece, featuring astonishing carved wood paneling and paintings by Daniel Frese. 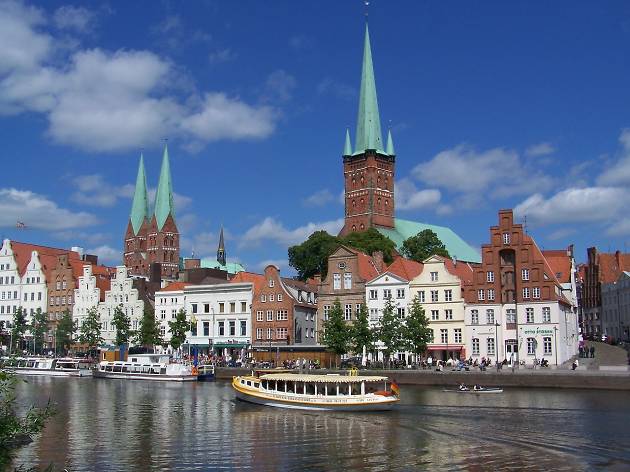 Historic “Queen of the Hanseatic League,” the proud port of Lübeck is today a UNESCO World Heritage site, renowned in particular for its Brick Gothic architecture. Beyond the imperious Holstentor city gate, the Old Town is a network of narrow lanes and gabled houses, with seven historic churches including the towering Church of St Mary. Lübeck is also the setting of Thomas Mann’s Nobel-prize-winning novel Büddenbrooks, which intricately details the 19th-century Lübeck bourgeoisie. ­The Buddenbrooks Museum pays detailed tribute to the life and work of both Thomas and Heinrich Mann.

Dating back to the 16th century, Im Alten Zolln is a Lübeck Kneipe (pub) institution. It has a great run in beers, a pleasant terrace and plenty of communal table jollity.

One of the oldest buildings in town, Hotel Anno 1216 matches its historic stucco, floorboards and wooden beams with pared-down contemporary luxury and an organic breakfast. Some rooms have river views, while the more opulent suites feature lavish fresco and panel paintings.

Taste the city’s marzipan. Some attest that Lübeck invented the sweet almond stuff, though there are rival origin stories from Hungary, Italy, Turkey and China. In any case, it’s delicious, with some of the finest at the classic Café Niederegger, where you’ll find exotic flavors from mirabelle plum to rum cracknel.

Call in at the church of St. Mary, a towering paradigm of the North German Brick Gothic style which set a new architectural standard for dozens of other churches in the Baltic region. It has the tallest brick vaulting in the world. 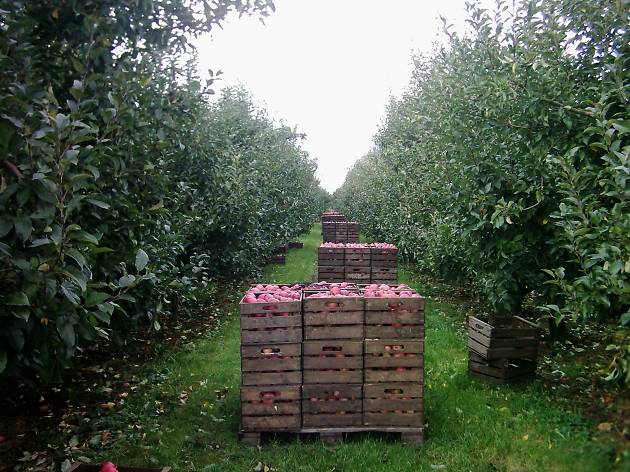 For those who fancy a rustic retreat from the city, the verdant meadows and orchards of the Altes Land offer real bucolic abundance. Just one hour from Hamburg city center via train to Jork, this fertile tranche is Germany’s largest fruit-growing area, with some 10,000 hectares of apple, pear and cherry trees. It’s particularly delightful in blossom season, but makes for a picturesque day trip throughout the year, with diminutive half-timber farms and cottages set among the orchards, and an excellent network of bike paths.

It’s a real plate-to-table idyll at the Hofcafé Ottilie, an organic farm and café particularly cherished for its home-made cakes and seasonal ice cream, not to mention the truly cosmopolitan cappuccinos.

For a cooling pint of beer, loop up to the quaint village of Stade where the historic Stader Ratkeller serves its home brew.

Call by at Jork’s charming church of St. Matthias and check out the little museum of local history, open from 11:00am until 5:00pm April to October.

The Hotel Altes Land in Jork offers simple, light and clean rooms, as well as an on-site restaurant which prides itself on local ingredients.

Call in on one of the area’s delightful farm stores and bring home some fresh fruits, honey, cured meats or cheeses. 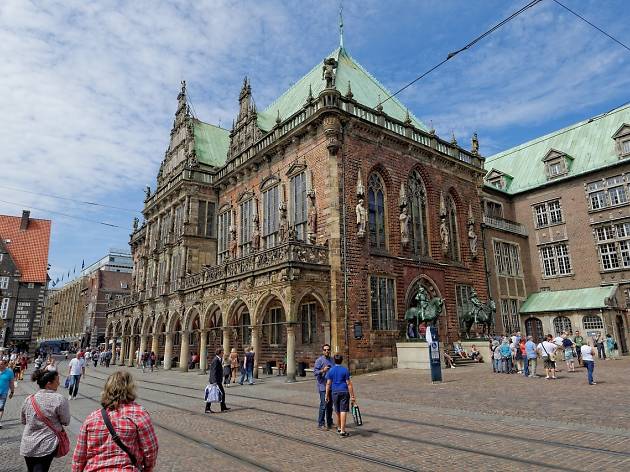 Another Hanseatic stronghold, Bremen remains one of Germany’s most important economic and cultural hubs. Emerging out of the Second World War relatively unscathed, the city has some outstanding historic architecture, not least in the central Marktplatz, or market square, and in the maze of 15th- and 16th-century half-timber houses that make up the city’s oldest quarter, Schnoor. The UNESCO World Heritage town hall is the jewel in the Marktplatz crown—another lofty example of the Brick Gothic style, with a Renaissance façade added in the 17th century. To the east of the Old Town, the illustrious Bremen Kunsthalle spans 600 years of Western art history with works by Rubens, Rembrandt, van Gogh and Paula Modersohn-Becker through to Wolfgang Tillmans, Cindy Sherman and Martin Honert.

The legendary Bremer Ratskeller was originally the council wine cellar of Bremen Town Hall. Today its vast, vaulted halls make for an excellent, tavern-like meal, including the world’s most extensive selection of exclusively German wines.

Down the road from the Kunsthalle, Heldenbar has a relaxed, student-friendly atmosphere and a great run in craft beers.

The Hotel Classico is a convenient and quirky choice, with 27 themed bedrooms just a couple of minutes’ walk from Marktplatz.

St. Stephen’s Church was built in 1139, destroyed by bombing in 1944, and rebuilt in 1950. Since 2007, it has been run as a “cultural church,” promoting dialogue between faith and the arts with regular concerts, readings, screenings and exhibitions.

Indulge in some local folklore and check out the bronze statue of the Bremen Town Musicians—the dog, cat, donkey and rooster of Grimm Fairytales fame.

Check Prices
Get us in your inbox