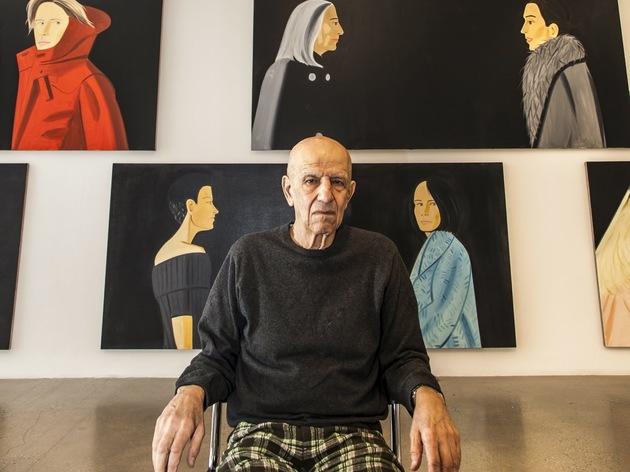 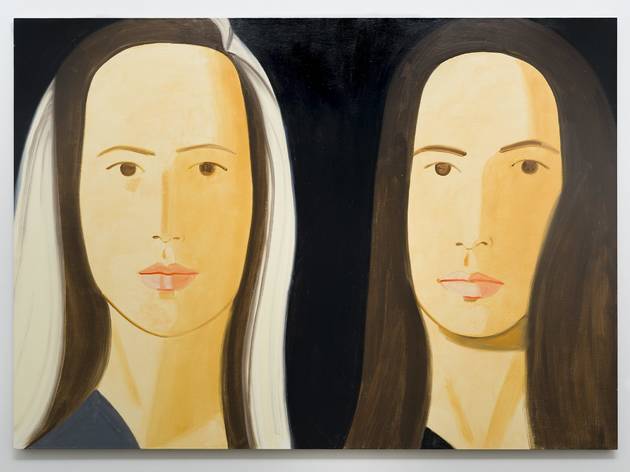 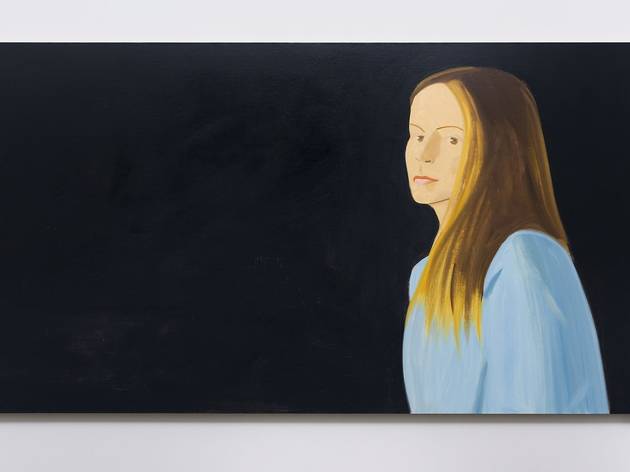 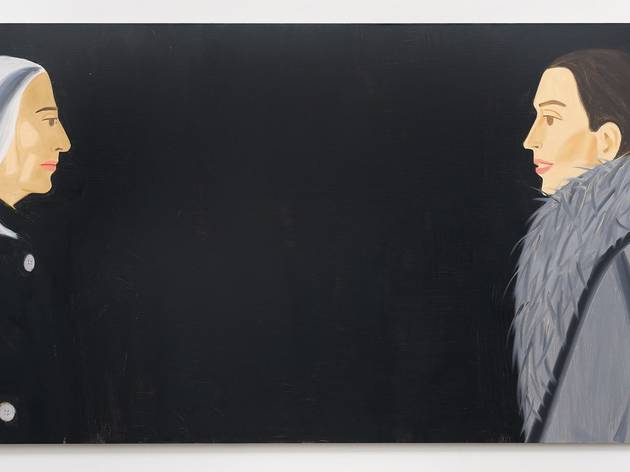 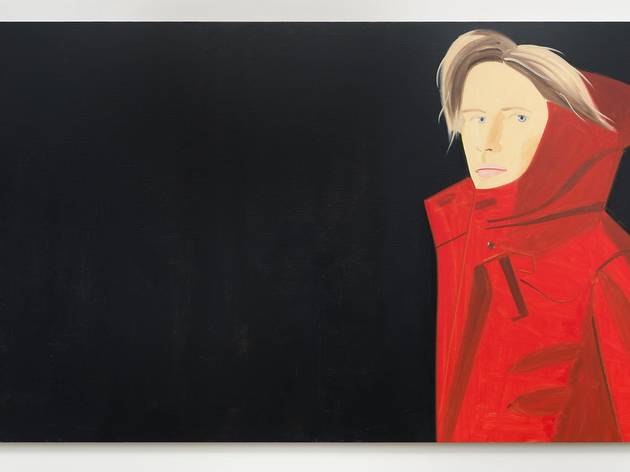 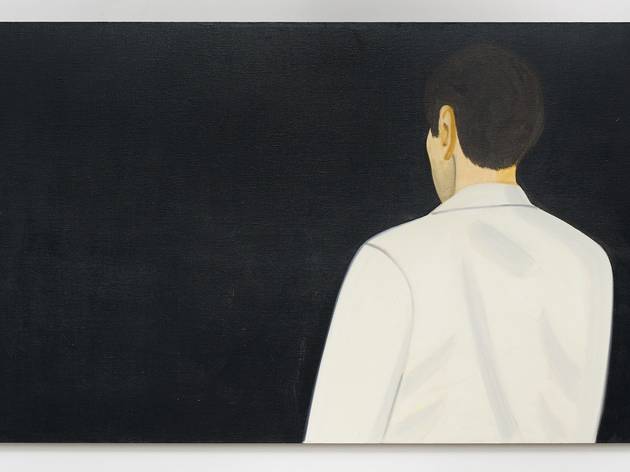 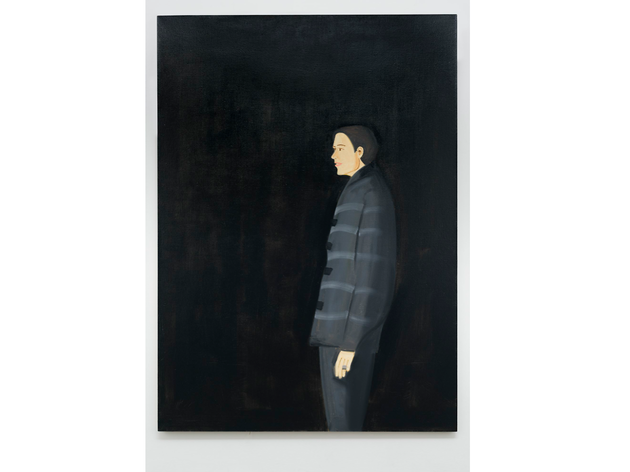 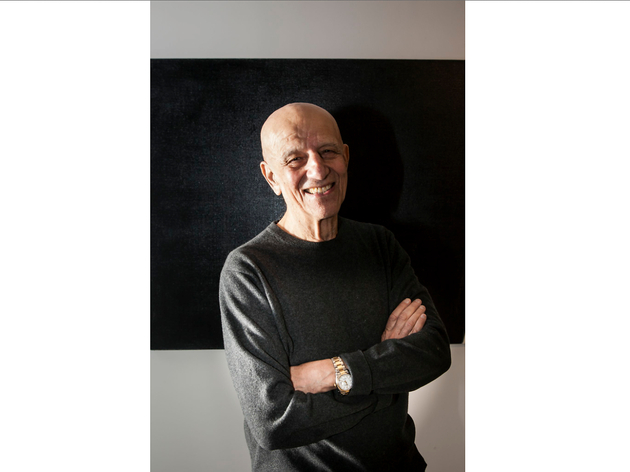 ‘I don’t think of myself as an old man,’ says Alex Katz. He certainly doesn’t paint like one. At 87, this legendary New Yorker is still nailing his signature stylish portraits. We caught up with him at his new show of ‘Black Paintings’ at Timothy Taylor Gallery.

How would you describe your work to someone who hasn’t seen it?
‘Oh, it’s figurative and contemporary.’

Who are the people in these paintings?
‘One’s an assistant, then there’s a girl who works at [Katz’s New York gallery] Gavin Brown’s – she just had a very attractive face, I don’t know her at all. There’s my son, Vincent, and that’s a girl: I know her parents, I met her at an opening and she looked great, so I asked her to pose. The other one is some guy’s girlfriend. He was a real Don Juan, I painted all his girlfriends.’

Do these ‘Black Paintings’ relate to your famous ‘Night Paintings’?
‘I did a lot of night paintings in the 1990s, but the black paintings go back to the 1960s. Black is a very tricky colour to handle and the finish on the paintings could perhaps be the most unique thing in my work. The blacks are all a little different. I think they came out pretty good.’

What do you like about using black?
‘Dark paintings have mystery, romance and death all at once. You can take your choice!’

You make stylish paintings of good-looking people. Do you think people mistake the subject of your work for its content?
‘Oh absolutely. I once had a guy, a painter, come over and say: would you say your paintings are superficial? And I said: oh yes! Oscar Wilde said only a serious artist can do superficial. The subject matter for me is really prosaic: it’s pretty girls and flowers. But I’m conceited enough to want people to like the paintings for more than the subject matter.’

You’re known for painting quickly, how did that come about?
‘You try to get into the unconscious. It loosens it up. I paint a painting because I want to see what it looks like, that’s really why I do it. You have an idea, but if you just render an idea it’s not very interesting. But the picture moves around a lot. You have to adjust to what the picture is and then your idea becomes modified. Sometimes I’m surprised, sometimes I’m not.’

Matisse was a formative influence. Did you get that from him?
'You have to realise that, when I started out, New York was a provincial town. Everyone at art school was painting like Braque but Matisse was what technically I wanted to do, that really complicated reduced technique. It would take me 18 hours to make a painting, and when I saw Matisse it looked like he did it all at once, so I went for that style. I just dropped art school. Matisse was in his 80s at the point. I remember my art teacher saying: this guy Matisse is having a show. He’s an old man but he paints pretty good.’

Do you think people say the same thing about you now?
‘Yeah, he paints pretty good. But I don’t feel like an old man.’

What do you like most about Matisse?
He could do a whole bunch of things with a line, four or five things at once, and the colour. It was done so simply. I naively thought he did it direct, in one hit. My paintings were pretty uneven. I threw away a thousand paintings, busted them up, because no-one explained how he did it.

As a painter, are you a storyteller?
‘Absolutely not. There’s no narrative in my work because you can’t get in the present tense with a narrative. It’s a sensation of seeing. Like a poet is supposed to show what language is, an artist is supposed you show you something to see. I’m trying to make you think of this as a realistic painting, that this is the way things look, and so that means I’m going to destroy your idea of what you think it looks like. And that’s a really aggressive thing, even though it comes in the form of, like, sweet chocolates.’

Is the aggression in your work a New York thing?
‘Yeah, that’s New York. I grew up with the world of machos. Macho men and macho artists. Macho painters always gave me a pain in the ass. I felt when I was young that I could make a painting of flowers that would knock them off the wall. Some guy would have a real butch painting and I’d have a painting of flowers, but mine would have the stronger light.’

You mean people like Jackson Pollock?
Pollock was another time period; I saw him once. I think at his best he’s a fantastic artist. But I couldn’t take his macho stuff seriously. I’m from a place where there were, like, real he-men. My father would dive off bridges. Someone like Pollock would not follow him.

Why did your dad jump off bridges?
For fun, it was like a he-man thing to show off to other guys.

So what did he think about you becoming an artist?
‘That was perfectly okay. My father thought the highest thing a person could be in society was an architect, it’s like a European aristocrat’s idea, which he wasn’t. He was an apprentice aristocrat – very fancy tastes but bourgeois morality. He thought a painter was below an architect but that was still pretty high. He thought my painting was pretty good.’

But you weren’t successful right away.
‘I always had some people who liked my work, and some people supporting me when I was not selling. There was a guy who had a paint company. He saw my paintings and said: listen Alex, if you ever need paint, come to my shop and I’ll give you paint. And he did that for 20 years. He would bring some collectors over to buy a painting for a couple of bucks, that kind of thing. So he thought I was good. Bill King, the sculptor, bought paintings of mine very cheap, so I always had some support. But when my wife met me she thought that anyone with brains would be painting abstract paintings.’

That evidently didn’t put her off.
‘No, I was a good dancer. I had the dancing going. My looks weren’t good enough and my dress wasn’t good enough, so I think the painting was secondary.’

You’ve made about 200 paintings of her over the years, haven’t you?
‘More than that: a ton of paintings. She’s like the perfect model. Picasso would have gone nuts for her. She’s got better shoulders than Dora Maar. Picasso had to fake Dora Maar’s shoulders. When I saw Ada, it was: hey, it’s Miss America! She had the measurements of Miss America. Her family is all involved in looking good. They’re Italian. Her mother made her these very fancy clothes. Physically she was perfect for a painting.’

Yours is one of the great love stories of contemporary art.
Well, we sort of fit.

And do you still dance?
‘It goes on.’

Any must-see London artworks?
‘I liked Piero della Francesca’s “Baptism” in the National Gallery when I was young. I think he’s fantastic, like an anomaly or something. It just belongs to itself, a real freak. The Marlene Dumas show [at Tate Modern] is fabulous. I’ve always liked her work but she gets better as she gets older. Technically, she’s a whizz’

Which other artists do you like to look at?
‘I might go to the Met a couple times a year and look at things. I like the Rousseaus a lot, they make me feel good, and I like the Matisses. Goya makes men look real interesting, like someone you’d like to have supper with. And Goya’s women look like something to fuck!’

I’ve seen pictures of your beautiful studio. Is it important to have such a cool space to work in?
‘Yeah, I want to be in a beautiful place. I don’t want a squalid, bohemian space, like a Francis Bacon studio. That’s disgusting to me. I have a very clean floor and I don’t like paint on my clothes. The bohemian thing I never liked. I come from Queens. It’s the beginning of the suburbs, it’s sort of "neat". I always liked that.’

Do you keep works around you in the studio?
‘Where I live I have a couple of paintings. I have a Marsden Hartley I bought and a couple of Degas monotypes and a de Kooning drawing, and they stay on the wall, and then on the other walls I put up paintings of mine sometimes to see what they look like and they just stay there for a while and they go away again.’

Do you work with music on or in silence?
‘A lot of times I have music on, to cut the outside noise down. I don’t really listen to it, it’s just there.’

What’s the best piece of advice you’ve been given?
‘My mother said: you’re either an artist or you’re a phony and you’re personal life is unimportant. I thought that was pretty good. Then she said: if it works out, you’re lucky.’

Do you have any unfulfilled ambitions?
‘I would like to have a big retrospective in New York, which I don’t think is going to happen. That would be fun. A lot of things that happen give me pleasure because of the people who didn’t like me or my work. I had this big painting in the Museum of Modern Art, of yellow tulips, and that gave me a great deal of pleasure on a lot of levels.’