Tate Britain's boozy 'Art and Alcohol' traces the history between fine art and getting shitfaced. Curator David Blayney Brown talks us through the show’s highlights

This is the most booze-soaked show you’ll see all year. In fact, given its subject matter, it would be fitting if ‘Art and Alcohol’, (Nov 16 2015 - Sep 30 2016) at Tate Britain was unfocused, less clever and good-looking than it thought it was, and concluded with episodes of crushing self-doubt. Instead it’s a concise display, clear-headed from start to finish, of rarely shown works from the collection. Most were created in the nineteenth century, when the hedonism of the Georgian and Regency eras gradually gave way to the self-denial of the uptight Victorian period, while a fashion for seventeenth-century Dutch paintings ensured that tavern scenes were all the rage in British art.

You’ll see fantastically detailed scenes of shitfaced Londoners, drinking to forget, to dull the pain, or just because they can. ‘If you were poor you would have drunk porter and ale,’ says curator David Blayney Brown. ‘If you were further up, you would be drinking wine and port. People used to get through the most phenomenal amounts of port. In fact if you were posh, you’d have alcohol with breakfast and basically never stop. People were completely pickled in it.’ Here, he chooses the key works on show. 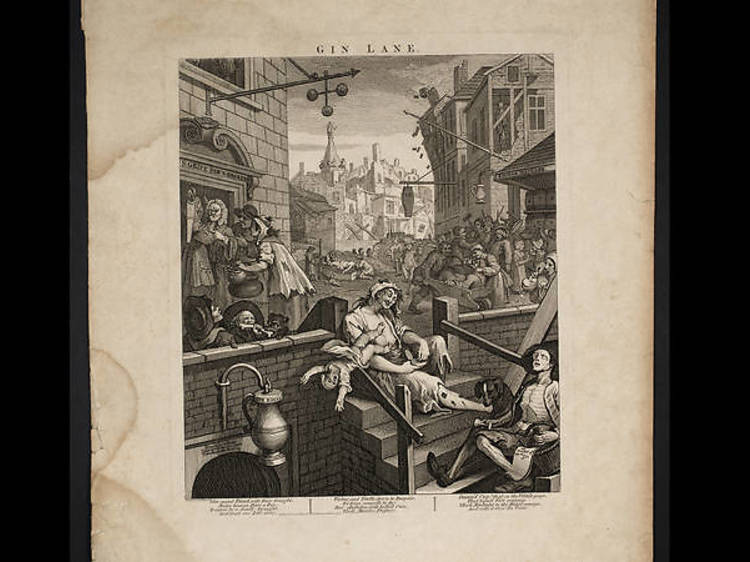 ‘This is the earliest work on show. Hogarth designed it as a print and produced it as a sort of humorous tragicomic image at a time when there was this national panic about alcoholism produced by a craze for gin, which had been imported originally from Holland, and therefore wasn’t “healthy” and “English” like beer. He produced “Gin Lane” and “Beer Street” at the same time. “Beer Street” is supposedly all about healthy drinking, whereas “Gin Lane” is about this evil that’s come over from the Continent. This was in the lead up to the Gin Act which, later in 1751, curtailed the number of unlicensed drinking establishments. Hogarth was moralising but he was a narrative artist as well. The whole thing is completely over the top, but it has to be to make its point.’ 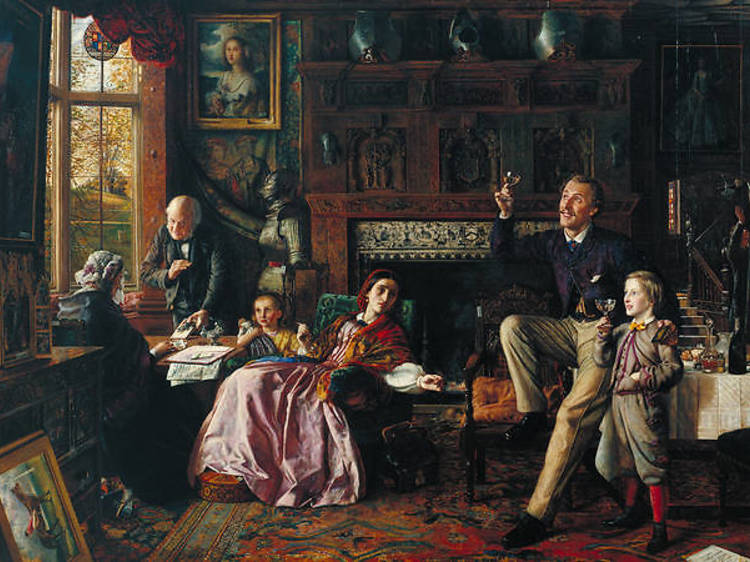 ‘This was painted during the height of Victorian moralism. What’s happened is that a country gentry family are having to leave the ancestral mansion and the bailiffs are totting up all the contents. The prime cause of all this is probably not drink itself but horses and gambling, because there’s a nice picture of a racehorse in the corner. There’s the man’s wife and daughter and perhaps her mother all looking very sad, while his reaction is not only to raise a glass, completely oblivious, but also to force his young son to do the same. It’s all pure kitsch, of course, but you get a sense of this spiral going on and on and being passed down the generations.’ 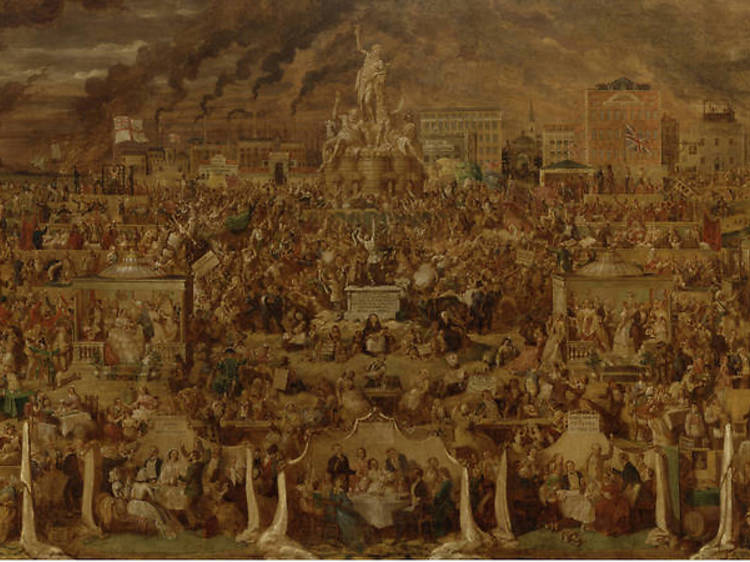 ‘This is a picture of pictures. There are at least a hundred different scenes going on: drunken schoolmasters, drunken famililes, people drunk in the streets, people too drunk to work in the factories and mills in the background. In the middle is this statue of Bacchus, so in theory they’re all paying homage to Bacchus, which means they’re all getting completely plastered. Cruickshank’s thing was that the whole of society was being consumed from within by drink. What he actually said about this picture was that he didn’t paint it as a kind of a temperance tract, but in the act of painting it, he was converted to teetotalism. It sounds a bit like overjustification, but he was quite damaged by drink because his father, who was also an artist, died in a drinking competition, just completely blew up and dropped dead, when George was very young.’ 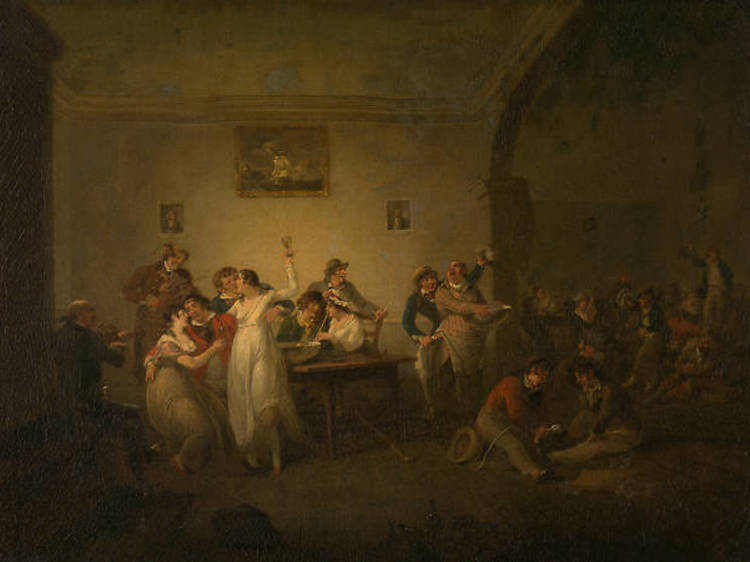 ‘What’s interesting here is that the narrative plays out in a contrasted pair of paintings, shown together. We’d actually all rather be the unmarried sailor because, on his return, he just goes out and gets smashed with some good time girls in a nice-looking inn, whereas the married sailor comes back to a hovel with mewling kids and a possessive wife. But then again at the same time, 1800-ish, the Napoleonic Wars were on and there was a whole kind of world out there in the press and in newspapers where, for the sake of the war effort, sobriety, stable family relationships, all these things were thought to be good, whereas old fashioned revelry was not so good because it was frivolous and we all needed to buckle down and fight the war.’ 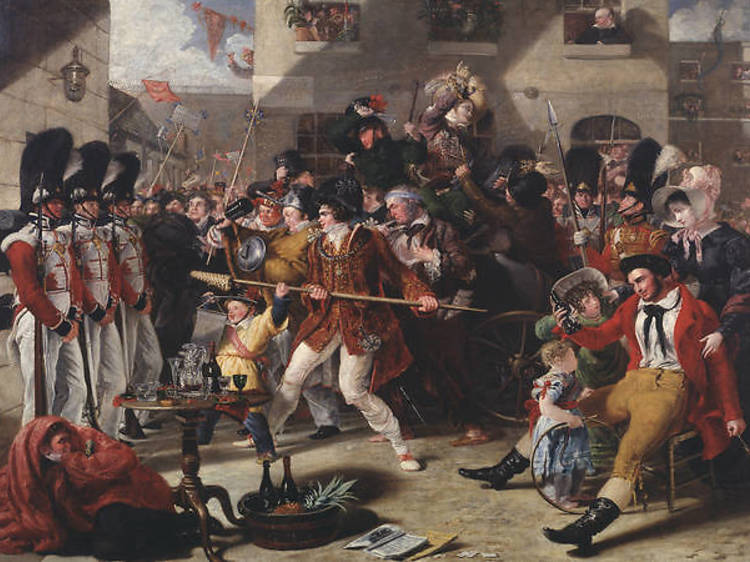 ‘At first glance this painting might look a bit strange in this context because it’s a prison scene. Haydon wasn’t hard-drinking but he did have all sorts of other problems, like high-living and high-spending, which he couldn’t afford. Several times he was made bankrupt and put in the King’s Bench Prison [in Southwark] as a debtor – and the thing about the King’s Bench was that it mainly had the middle and upper classes among prisoners and didn’t really have any kind of discipline or governance. It was run by the prisoners for the prisoners and so drink and all sorts of things were constantly being smuggled in. This is a mock election. What’s happening is that the winner of the election is being carried on a barrel by some of his fellow prisoners and they’re all getting progressively smashed. What’s fascinating is that it’s partly about debt, and partly saying there’s no use in putting people in prison because they’ll only learn worse behaviour, which is interesting in the light of debates today.’ 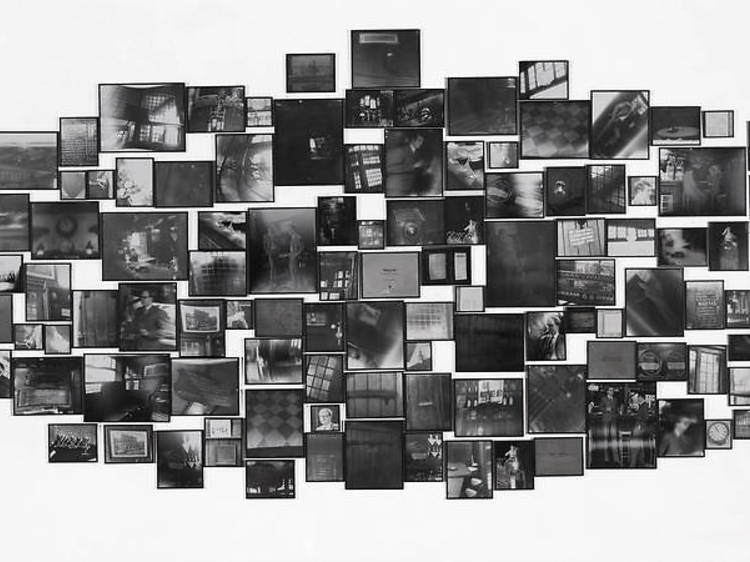 Gilbert & George, 'Balls: The Evening Before the Morning After - Drinking Sculpture', 1972. © Gilbert and George

6. ‘Balls: The Evening Before the Morning After Drinking Sculpture’, 1972, by Gilbert & George

'These multiple photographs were shot in a pub that’s long gone, but was in Balls Pond Road. I want to show this opposite the Cruickshank because in both you get lots of narrative in one art work. With the Cruickshank they’re all in one painting whereas here they’re broken down into individual units.  Gilbert & George had the photographs, which they took, developed randomly to different sizes and different levels of clarity, so some are very clear and some are very blurred, as if you’re there' 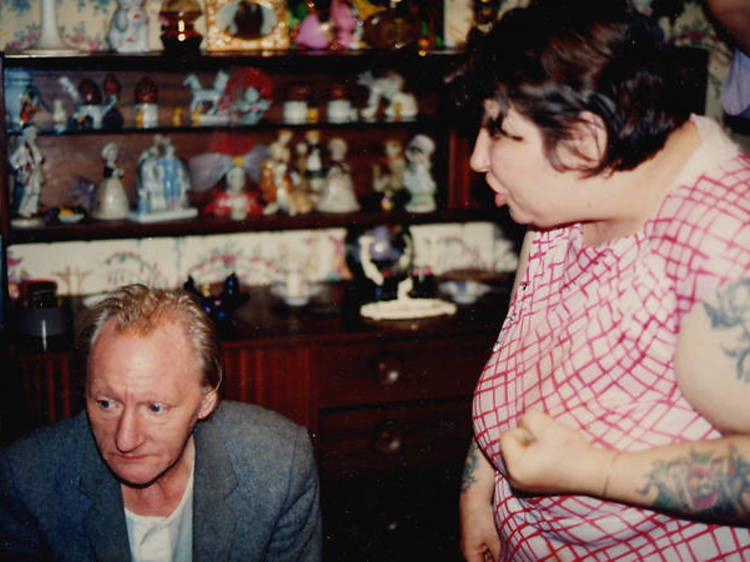 ‘This is the most recent work on display. It’s a portrait but, nevertheless, it’s about the relationship between Billingham’s parents, which somehow survives in spite of his father’s alcoholism. It’s a poignant document of a family and family relationships under pressure. He looks in another world and she’s looking down at him and obviously trying to reach him but he’s unreachable.’