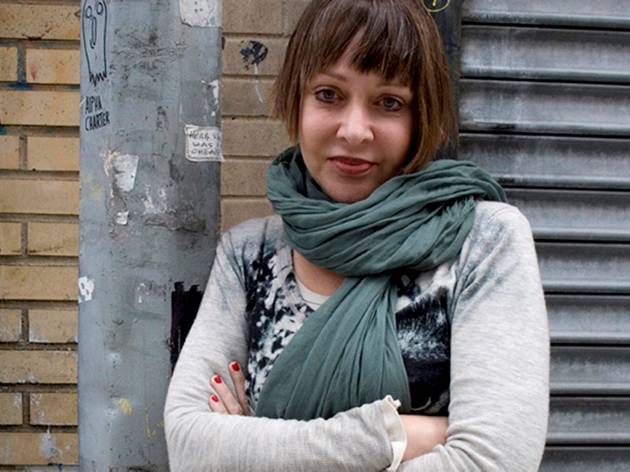 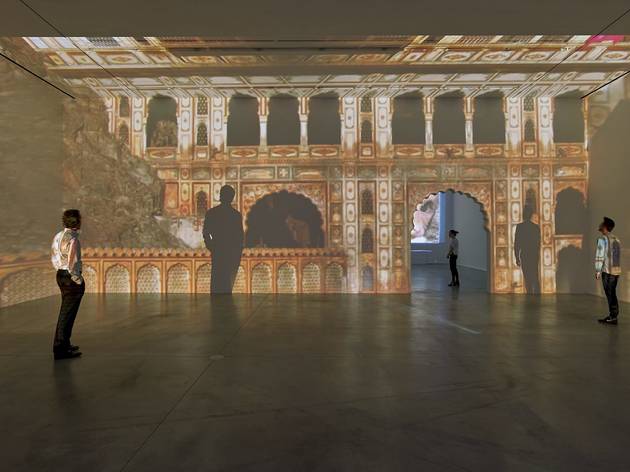 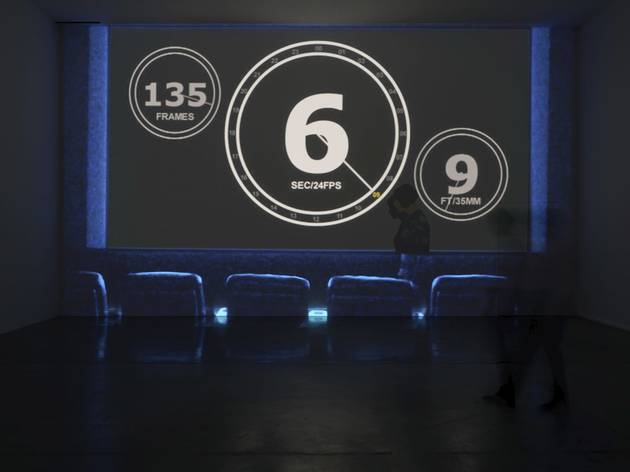 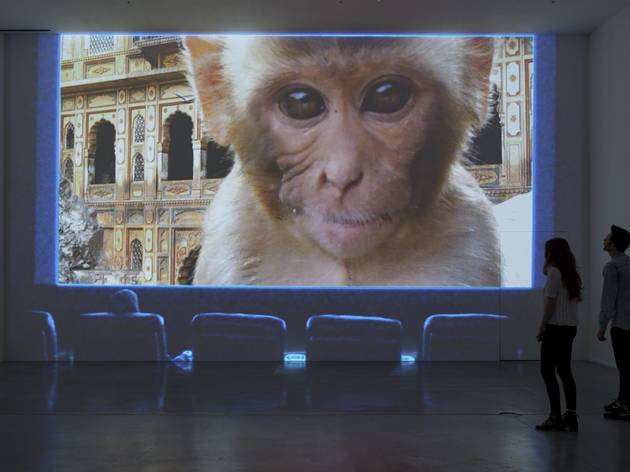 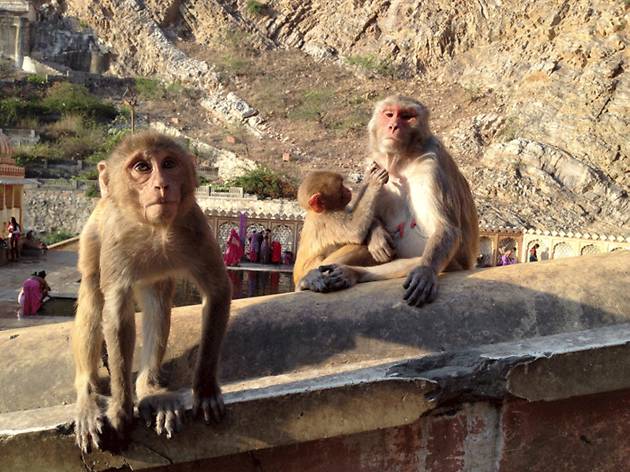 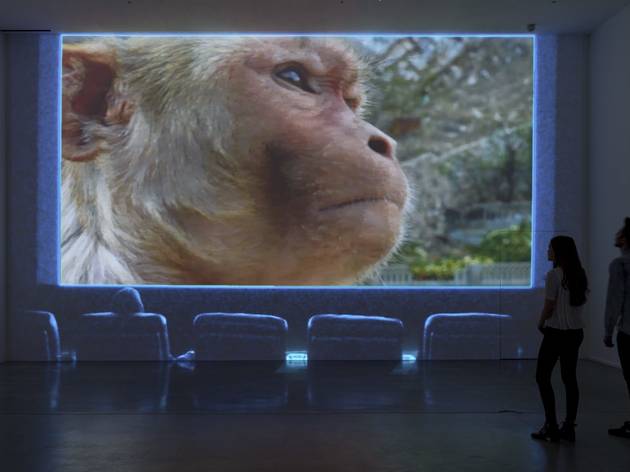 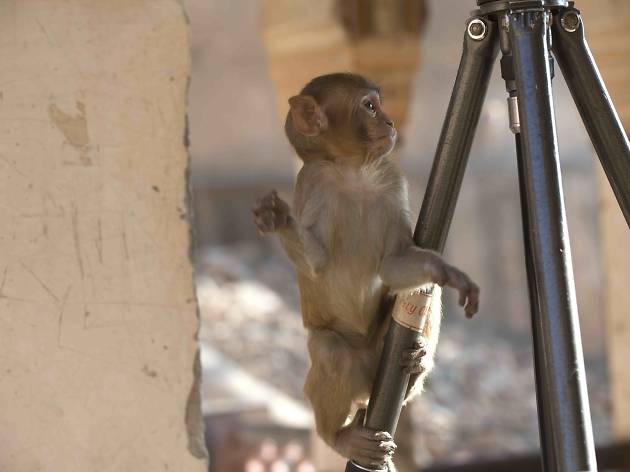 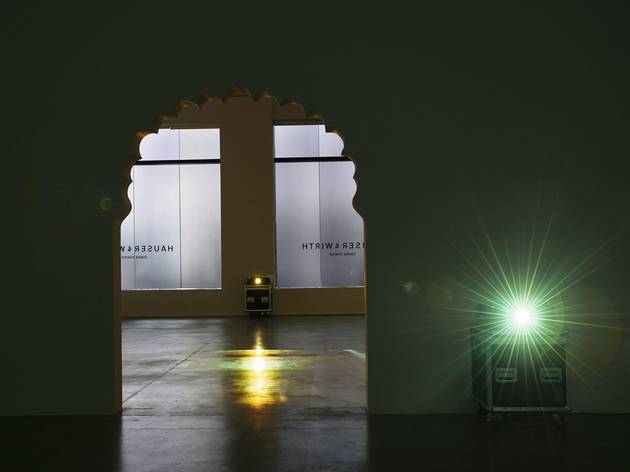 Dolphins, gorillas, dung beetles, and now monkeys – Diana Thater has filmed all sorts of animals for her captivating video installations that examine how we interact with nature and our surroundings. The LA-based artist talks about not being an adventurer, her love of David Attenborough, and the theatricality of religion.

You’ve worked with all sorts of animals in past projects. Why monkeys for this?
‘Each piece I make builds on the previous work, so each is a different contemplation of the animal and natural world. This is really about monkeys as actors. They’re known for their personality – they’re naughty, curious, funny and comical. It’s about their character and the way we look at them.’

These particular monkeys live at the remote Galtaji Temple, near Jaipur in India.
‘Yes. The temple is actually inaccessible to everyone, and I think it’s beautiful that the only beings that can get to the temple of Hanuman – the Hindu monkey god – are wild monkeys. I was thinking about the monkeys worshipping the monkey god, and how fantastic it is that culture and nature, the real and mythical, come together.’

The installation is very dramatic.
‘I’m interested in the theatre and the performance of religion: the rituals, gods and costumes that get employed. Hinduism is very rich in this. What interested me about the temple is that it’s just a façade built against a cliff to look like a building. So the doorway, which I’ve cut out in the gallery space for the viewer to walk through, is actually a doorway to nothing.’

Your work combines immersive interactions that teeter between experience and imitation.
‘I don’t want to make it like being there. It’s about moving forward from façade, into space and on to screen. I’m interested in the idea of the theatre and what it means to encounter an image in a theatrical setting. I want to create an experience that triggers an emotional and physical response, one that leads to a thoughtful response, to the conceptual. That’s why I make installations. You have to walk into them, so you have a very particular experience that is both physical and visual but it’s silent.’

The lack of sound in this work is surprising.
‘I grew up loving the silence of museums. Of course that’s lost now, but I wanted my work to be like that something that you could contemplate in quiet. I also want you to hear the hum of the projector and people walking around because I want you to be in the present, fully in the experience you’re having. I don’t want to project you into another space. It’s all about keeping you in the here and now.’

How long did you film for?
‘Just seven days. I don’t go for a long time. Everyone thinks I’m adventurer but I’m not. I’m staying at Claridge’s, that’s my idea of an adventure! When I went to Central Africa I was living in some dump and in Chernobyl I was in a trailer, which made me very unhappy. Someone wanted to send me, I forget where now, up a mountain somewhere and I thought: “Yes if there’s a Four Seasons, but I’m not climbing Mount Everest.” I go where I have to go, I’m not a National Geographic photographer.’

But you’ve referred to your work as ‘neo-National Geographic’.
‘I’m a National Geographic wannabe. I’m addicted to watching nature shows, I love the Smithsonian Channel and David Attenborough, he’s so unbelievable.’

Why do you want to emphasis the significance of our relationship with animals?
‘Nature is our only real other. Claude Lévi-Strauss said that the greatest tragedy he could imagine, and I’m going to paraphrase, was the fact that we share the planet with beings with whom we cannot speak. I’ve always been fascinated by nature and who animals might be, not who we make them into. I always work with scientists and specialists and the nature of my work is observation, I’m not interested in vivisection. I’ve made work about the wild and the tame, the way we control nature for an aesthetic reason, and how we frame it. All of my work asks the question: Is it possible for nature to be a subject and not an object for our contemplation – is it possible to actually respect the animals and not destroy them?’

What made you start working in film and video?
‘Since I was a child, I’ve loved two things: art and movies. I was a big movie fanatic and I watched Alfred Hitchcock, John Ford, all these great directors’ work. I lived in New York and grew up going to all the museums; Metropolitan Museum of Art and the Museum of Modern Art. When I decided I was going to devote my life to being an artist, I decided I would put them together and I would make art with moving images. It combines the two things I love.’

Do you find LA is a great place to work?
‘Of course, LA is famous for its artists, thank God. When I first moved there, the first generation of artists like John Baldessari and Ed Ruscha didn’t move to New York. Then their students, like Mike Kelley, stayed and subsequently all of my students at Art Center College of Design stay. Nicely unlike New York, it’s not built around the market; it’s built around the community of artists, museums and art schools. It’s really great to be an artist in LA.’