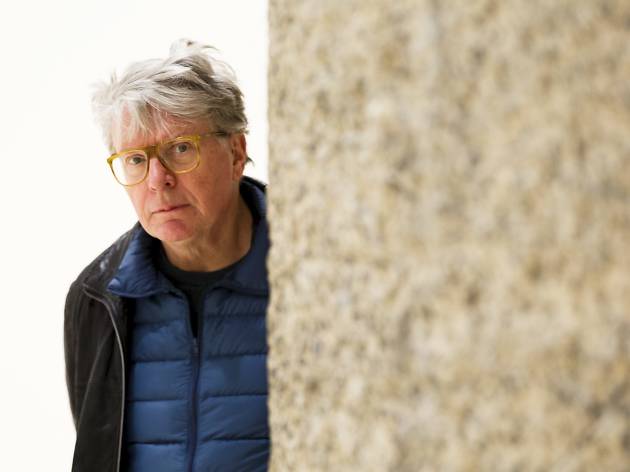 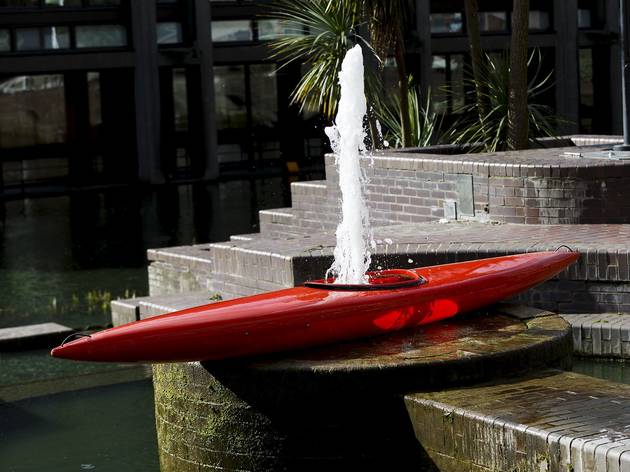 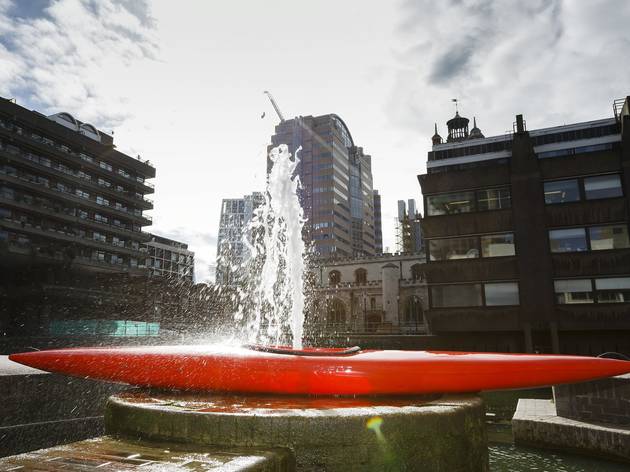 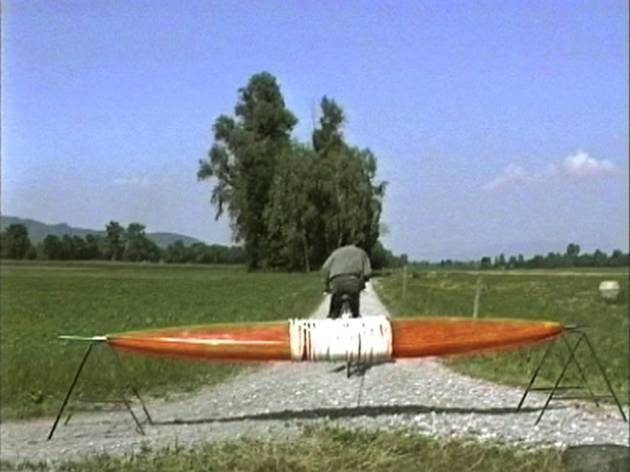 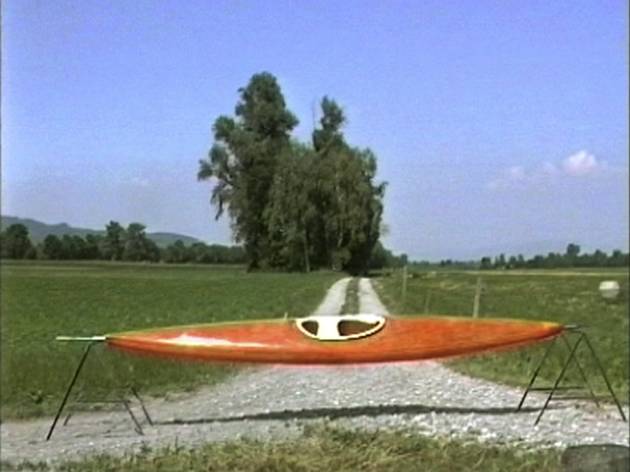 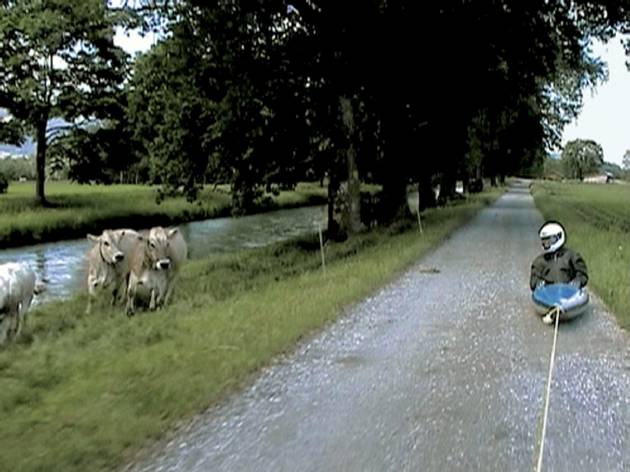 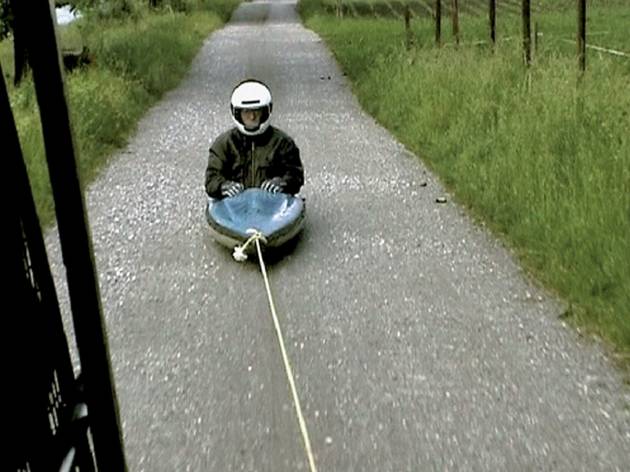 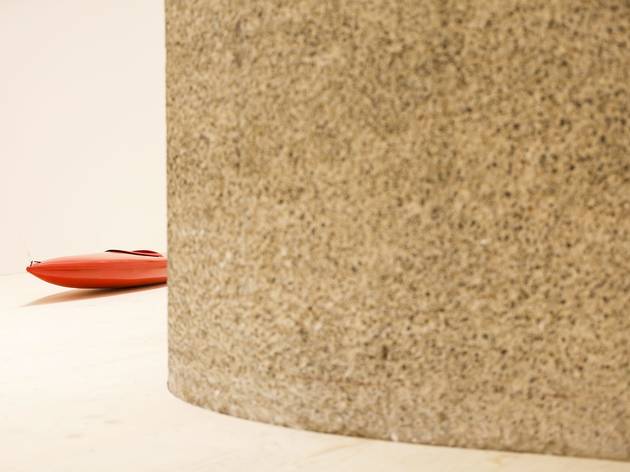 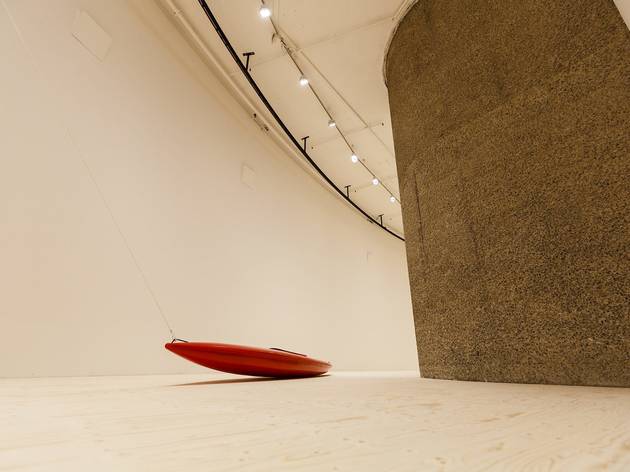 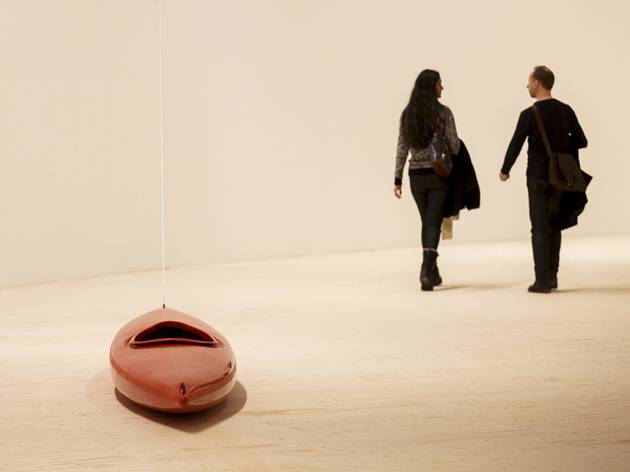 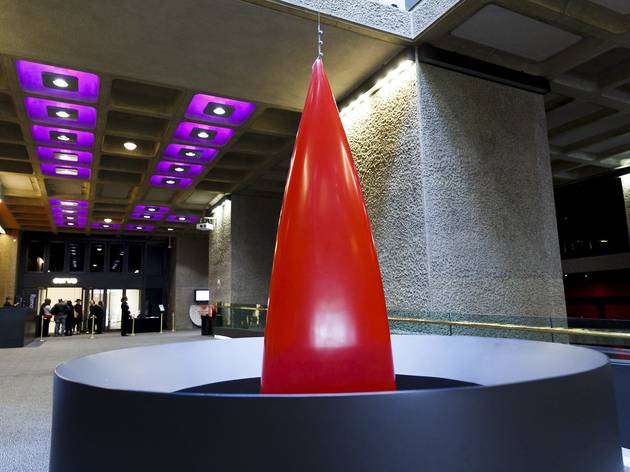 Before ‘Jackass’, ‘Rude Tube’ and pretty much everything on the internet that isn’t porn, Swiss artist Roman Signer made pratfalls, mishaps and minor explosions into fine art. Revealing unexpected beauty and sometimes a new kind of logic in things we take for granted, the sprightly 76-yearold is best known for experimental works in which dynamite is used to propel objects like wellington boots and chairs through the Swiss countryside. He’s also the world’s foremost (okay, only) kayak artist, synonymous with the boat as both sculptural form and method of unconventional travel. Discussing some of the works dotted around the Barbican for his new show, he tells us how art floats his boat.

‘Kayak with Fountain’ (2015)
‘I was a technical draughtsman in an architect’s studio. After about ten years I had to stop because otherwise I would have died of boredom. Art always interested me, but at the time I didn’t have the courage to become an artist. I was sporty: I liked athletics, swimming, hiking, skiing... So, my works were inspired by my everyday life. There is an entire series of kayak works starting from the 1980s. I was an avid kayaker until a friend died in a kayak accident and I felt I couldn’t do the sport anymore. I needed some time to find distance from this event, then the kayak found a new space. So, in a sculpture like “Fountain” the kayak doesn’t have a practical use or meaning anymore. It enters a poetic space and finds its place there.’

‘Eskimo Roll’ (1995)
‘I see myself as a sculptor and action artist (Aktionskünstler). What I am not is a surrealist or a land artist. It’s true that I like to keep it simple but I am not a minimalist in a classical sense either, as my works have a content and are not only about form. The Eskimo Roll is a vital technique for kayaking. Eskimo kayakers have jackets [anoraks] that are sewn on to the kayak and if they should turn upside down, they have to right themselves using the paddle. This action, in which I “roll” a kayak by attaching it to a length of rope at one end and a bicycle at the other, was carefully planned, because I wanted to disappear in the woods in the distance at the moment when the kayak was still moving. But things rarely happen quite the way they are planned.’

‘Kayak’ (2000)
‘I was commissioned to make a work for the Reykjavik Museum responding to the nature and landscape of Iceland. My proposal was that I would be pulled along a street in a kayak, and I decided to test this in Switzerland first. Quite unintentionally, this became a very beautiful film that also became famous because of the cows running alongside me. The cows were not planned, they were a surprise. The bottom of the boat wore out but I didn’t wear padded trousers. In Iceland it was much worse, I was pulled for almost 20 kilometres and the seat completely eroded. Eventually I was sitting on the kayak like on a surfboard. At the end, on the side of the street there were four ornithologists who looked at me with their serious faces, shaking their heads. They were looking for solitude to observe the birds and this loud evil machine came by. But, I respect nature very much, and I always collect up everything I leave behind.’

‘Slow Movement’ (2015)
‘I was invited to Curve and I thought of the video with the cows (there, the kayak is pulled by a car, here, by a motor). The Curve Gallery is basically a tunnel and I wanted a kayak to be pulled back and forth by a motor on the ceiling. The kayak is empty: it’s an installation, not an action. Climbing inside is prohibited; the motor would not be able to pull the weight of the kayak with someone inside. There’s a relationship to a kayak sculpture which hangs in the foyer, which is vertical. And the fountain kayak outside can be seen through the hanging kayak. It’s difficult to prove that what I make is art. It’s like if you asked a poet to describe where the poetry is in their work. My works are both intellectual and out of the belly. I always ask my belly. And I don’t worry at all if people call me madcap or crazy. I am mentally completely healthy.’