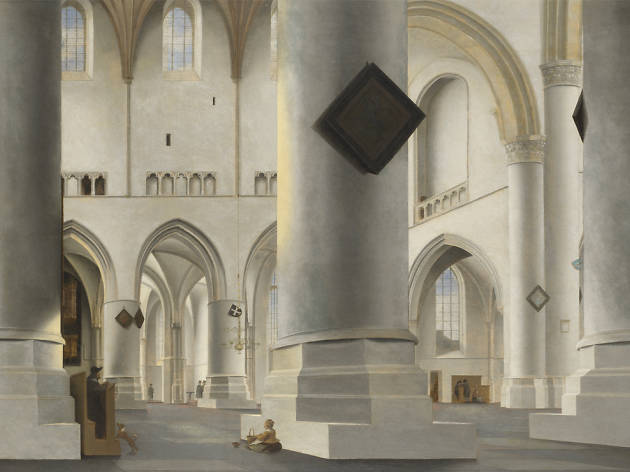 The whitewashed, gothic-columned interior of this church is ambitiously conveyed in all its topographical intricacy by Dutch architectural painter Pieter Saenredam. Perhaps reflecting on a new era of Lutheran austerity, his church is portrayed as an eerily empty space, with the painter subtly and skilfully altering the perspective to conjure greater spaciousness and luminosity. Londoners shoud consider themselves lucky that this Haarlem interior hasn't become a gallery globetrotter. 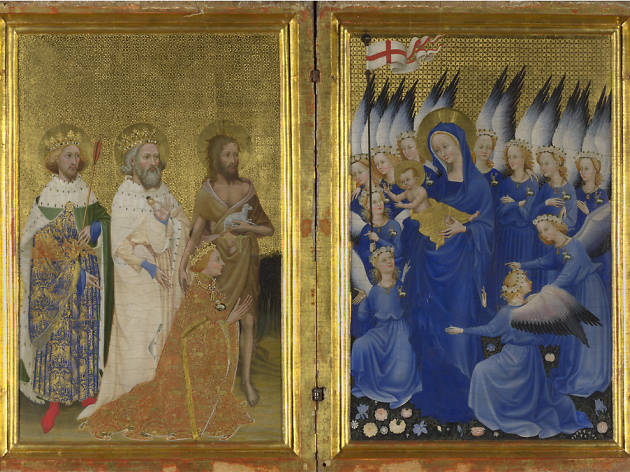 English history courses through the veins of this gorgeous, golden-laced, fourteenth-century diptych. It’s one of the country’s earliest portraits, and belonged to King Richard II, the doomed monarch who was in turn written about by Shakespeare. In practice, it was used as a portable altarpiece for the king, but nevertheless it’s a complex, vivid, and sumptuously-crafted piece of art to behold.
Advertising 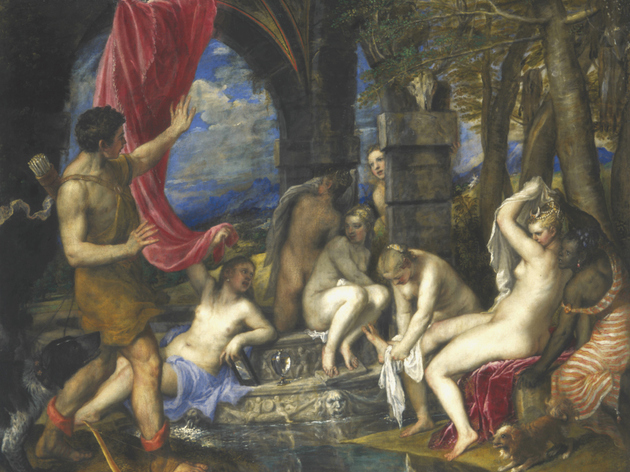 Poor Actaeon, stumbling upon a bathing beauty and doomed by a glance – a warning, surely, to imprudent viewers of all kinds. Diana, chaste huntress, takes cruel revenge, transforming the interloper into a stag to be hunted to death by his own hounds; and so the rich hues and dynamic brushwork of the great Renaissance painter Titian form a beautiful funeral shroud for the luckless young man who should have looked to the plinth and its ominous burden of a stag’s skull – if, that is, he was able to look anywhere else at all. 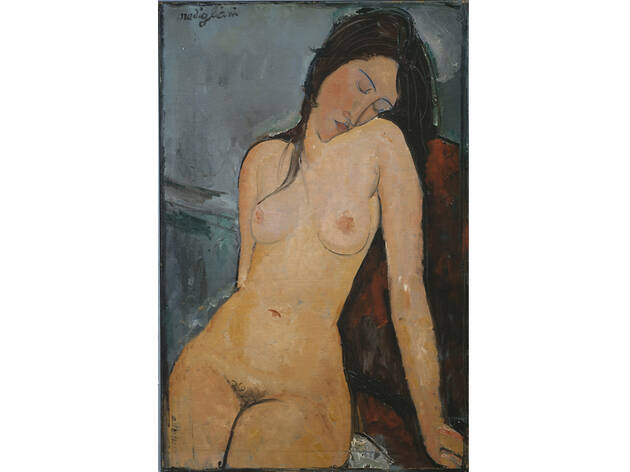 Modigliani takes one of the great standard themes of painting, the female nude, and creates an image full of tension. There is an awkward marriage of stylised primitivism in the tilted face and scratched-in hair, and the more subtle, almost classical, treatment of the body. There’s none of Picasso’s primal urgency or iconography. Instead, this is a work about sensuality, vulnerability and the act of looking. The suggestion of a studio – dingy walls and the inevitable drapery – refutes any narrative or mythical interpretation. Modigliani gently reminds the audience that, should he choose to, he can paint just about anyone under the table without recourse to any modern trickery.
Advertising 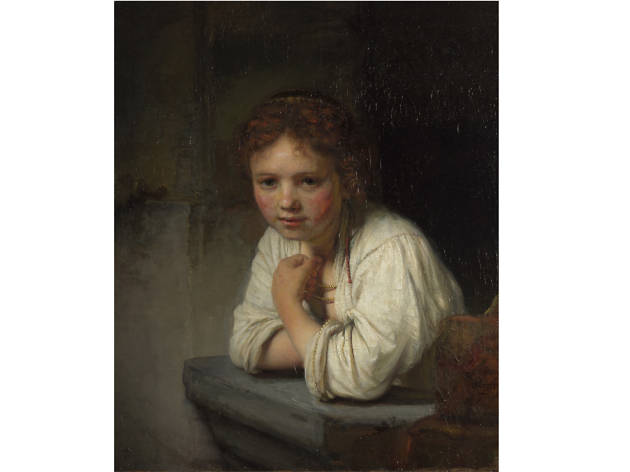 Rembrandt’s ruddy-cheeked young woman, toying with the gold chain at her neck, is an enchanting mix of innocence and knowingness. Her identity remains uncertain, which explains why she has been described as ‘London’s Mona Lisa’. What we do know is that Rembrandt painted her in 1645, just as he turned 40, and that her tanned complexion gives her away as being of the lower orders – a field worker rather than the courtesan, Jewish bride or Biblical figures which at various times she has been thought to be. Recent conservation has added even more colour to her cheeks, and revealed Rembrandt’s surprisingly bold palette and hands-on approach – it seems he sometimes ditched his paintbrush in favour of his fingers. 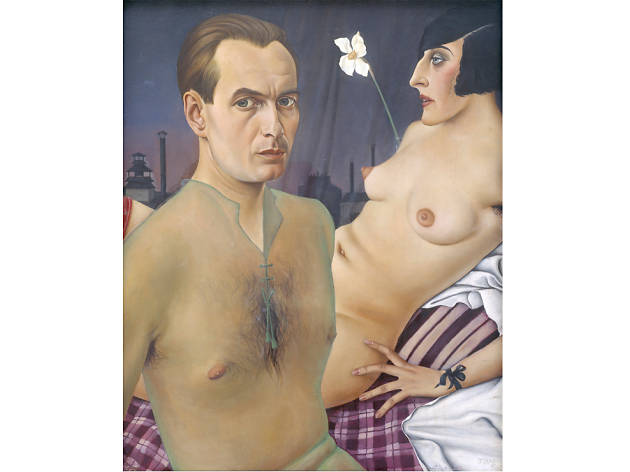 © Christian Schad Stiftung Aschaffenburg/VG Bild-Kunst, Bonn and DACS, London 2014
WHEN? 1927
WHERE CAN I SEE IT? Tate Modern
I LIKE IT See also 'Marguerite Kelsey'

Schad, born in Munich, moved from Vienna back to Berlin in the year he painted this rather terrifying self-portrait. The Weimar Republic was in full sashay, and the decadence of his transparent shirt, juxtaposed with the freggio (a scar inflicted by lovers) on the woman’s cheek, seems to distil that brief period of ostentatious display and rising violence: in six years, the Nazis would come to power. The narcissus, frail flower, gazes bleakly down at an exposed nipple, in seeming prescience: what use is self-adoration when the world is careering towards the abyss?
Advertising 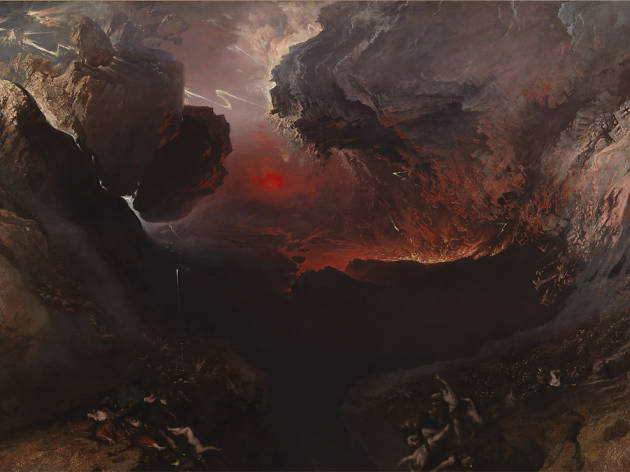 © Tate, London 2014
WHEN? 1851-3
WHERE CAN I SEE IT? This painting is part of the Tate collection but currently not on display. Check Tate Modern or Tate Britain to see when it will next be on show.
I LIKE IT See also 'The Fighting Temeraire'

Sometimes, you just want a painting to deliver an instant, immediate impact – and Martin’s apocalyptic scenes, of which this is his masterpiece, do that in spades. Sure, the Biblical message may get overlooked nowadays in favour of the more simple pleasures of death and destruction – but its warning about the natural cataclysms facing humanity resonates perhaps more than ever. 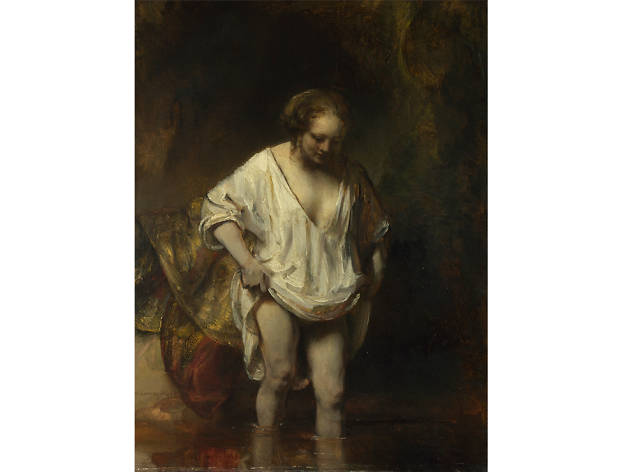 If you think the casually hoiked-up undergarment suggests intimacy between artist and subject, you’d be right. The wading woman is believed to be Hendrickje Stoffels, who became Rembrandt’s common-law wife and bore him a child (Cornelia, who was baptised the same year as this painting). They would have married had the artist’s first wife, Saskia, not left a provision in her will, pretty much disinheriting him if he ever got hitched again. This masterpiece of Rembrandt’s later life is remarkable for its spontaneous handling of paint. In parts it looks unfinished but, since he signed and dated it, Rembrandt evidently considered it completed to his satisfaction.
Advertising 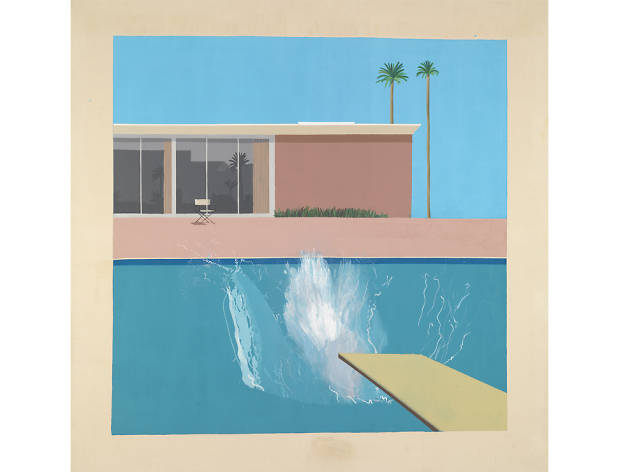 © David Hockney
WHEN? 1967
WHERE CAN I SEE IT? Tate Britain
I LIKE IT See also 'Mr and Mrs Clark and Percy'

In Bradford there were outside lavs, but in California everyone had a swimming pool. Or so it seemed to David Hockney when he first visited the US in 1963. ‘A Bigger Splash’ ripples with the good vibrations of fun, sun, sex and freedom as seen through the hungry eyes of a first-timer. Yet the painting is filled with ingenuity – not least in the splash itself, the split-second moment which took Hockney weeks to distil in graphic form. It represents the absent subject, just as the chair on the other side of the pool stands in for the lustful viewer. There may be no bare-bummed beach boys in this particular Hockney painting, but it is nonetheless drenched with desire. 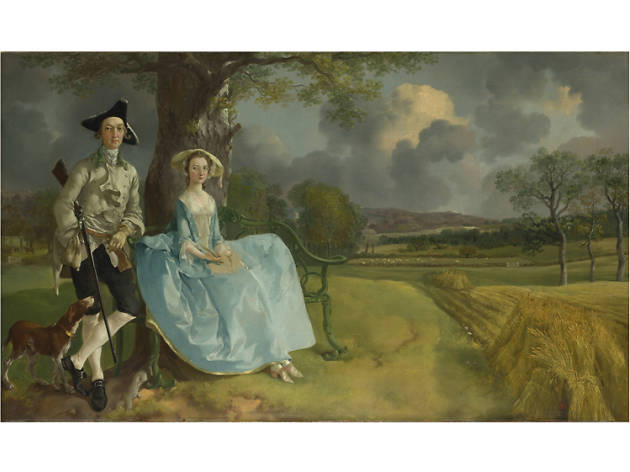 WHEN? 1750
WHERE CAN I SEE IT? National Gallery
I LIKE IT See also 'Mary Countess of Howe'

A Georgian gentleman, shotgun beneath his arm, silk-clad new wife at one side and a nice pendant to the devoted hound at the other, pauses in his patrol of his estates to be painted by the great Gainsborough. The composition, known as a ‘conversation piece’, mixed portraiture and landscape. It was probably important to include the rolling acres, since the subjects were newly-minted gentry, just up the social ladder from ‘trade’. And who better to depict them than young Gainsborough, an upstart himself? The weaver’s son had recently married a duke’s illegitimate daughter and would rise, 30 years later, to paint the king.
Count down 70-61
Recommended