The fall and rise of the Carlton Tavern

Campaigners were jubilant in 2015 when an illegally demolished west London pub was ordered to be rebuilt as an exact replica. But three years on, it’s still not happened

One day in 2015, a London pub was pulled down. There’s nothing unusual about that. Pubs vanish in the capital every day. Business wanes, the boards go up, the redevelopment notice is stapled to the door, then it’s gone. But Maida Vale’s Carlton Tavern was about to hit the headlines. Polly Robertson, a local, remembers April 8 2015 vividly. ‘I came out of a meeting and I had 60 missed calls,’ she says. ‘I didn’t understand what was going on. I walked down there, and when I arrived, it had already been demolished.’

At the time, Robertson was campaigning on behalf of the local community: advising on tenants’ rights and trying to keep facilities like church halls open. She was well aware that the area’s working-class character was under constant threat, but even she wasn’t prepared for what had taken place. On the pretext of conducting a stocktake, the Carlton Tavern’s owner closed it one day then simply pulled it down. It happened so fast that all the contents of the pub, including the local hockey club’s trophy cabinet, a flat-screen telly on the wall and the kegs of beer in the cellar were destroyed along with it. It had been the only building on its street to survive the Blitz, but there was something savagely warlike about the Carlton Tavern’s destruction. It felt like the links to its customers and community were being demolished along with the pub.

Its owner was London-based Israeli lawyer Ori Calif. He was on site at the demolition with an associate. Polly Robertson is also originally from Israel. She spotted them when she arrived on the scene. ‘They were dressed in a traditional Jewish way, so I went over and spoke to them in Hebrew,’ she says. ‘They didn’t realise I was from the local community, so I asked: “What’s going on, what’s happening?” [Calif] explained to me that all these people standing around were just drunks and that this pub was just nothing. I said, “What will happen about this?” He said, “We’re taking a risk, but all we’ll probably get is a £5,000 health-and-safety fine. We’ll build luxury flats and make millions. It was due to be listed. We’re protecting our investment. You would do the same.” They said exactly the same to an ITV reporter.’

The fate of the Carlton Tavern made the news around the world. English Heritage had been on the point of granting the pub Grade II-listed status for its well-preserved 1920s architecture and interiors. An application to redevelop it by its owners had previously been refused by Westminster City Council. Its demolition was both illegal and cynical. In the subsequent planning investigation, the pub’s role in the community was highlighted. ‘People didn’t go there just to drink,’ says Robertson. ‘People went there for a cup of tea, if they needed help, needed a favour, if you wanted someone to give you a hand with something.’

When it came, the verdict of the enquiry was an even bigger story than the demolition. The Carlton Tavern was to be rebuilt, brick by brick, tile by tile: an exact facsimile. Result, everyone agreed. That’ll teach developers to flout planning regulations. Well, maybe…

If you visit Carlton Vale, NW6, today, you can’t miss where the Carlton Tavern is meant to be. A hugely high hoarding surrounds the site and a giant notice proclaims ‘Carlton Tavern: Coming Back Soon’. If you didn’t know the story, you’d think that whoever is working there is doing something laudable, not undoing something pernicious. But ‘back soon’ looks optimistic. The Carlton Tavern was supposed to have been rebuilt in July of this year. In October, Westminster City Council pronounced itself satisfied that work is progressing. Robertson is less convinced.

‘We were hoping to have a big party in July,’ she says. ‘There’s concern that if it’s left for too long, it won’t happen. What we’re saying to the council is: “Follow through. Don’t leave it.”’

She’s also worried about the nature of the rebuild. Bricks, tiles and fittings were recovered from the original building. English Heritage had already carefully documented the interiors and exterior as part of its listing assessment. ‘It’s been agreed that there is enough [material] to create a replica,’ says Robertson. ‘But at the moment, it’s hidden. My concern is that when the hoardings are removed, we’re going to have a building that doesn’t resemble anything.’

The campaigners even reached out on Twitter to see if anyone could help out with a drone to fly over the site and check that construction was happening – that it wasn’t just someone crouched behind the screens banging a couple of bricks together and taking the occasional fag break. Permission should have been sought to erect the hoarding. Inevitably, it wasn’t. There’s a rumour that the rebuild’s project manager used to work in Hollywood as a set designer. ‘We don’t know what’s there,’ says Robertson. ‘And that mystery seems odd.’

The Carlton Vale building site is not the only part of this story that’s mysterious. A quick check on the government’s Companies House website for Calif’s company, CLTX, brings up his correspondence address as 2a South Hill Park, NW3. This is a derelict Hampstead pub, the Magdala Tavern. It’s famous as the place where Ruth Ellis fatally shot her lover in 1955, leading to her being the last woman executed in Britain. It’s been shut since 2016. The local community is worried that it too might be redeveloped and has been campaigning to save it. A story in the Ham & High newspaper from the time reports how its last tenants were ‘unable to agree terms and conditions on the lease’ with the Magdala’s owners, resulting in its closure.

Before that, back in June 2013, Calif registered a company called Ya (sic) Old White Bear Ltd (dissolved in 2015). The following month, Ye Old White Bear pub in Hampstead was sold to an Isle of Man-registered company, and closed down. Although listed as an Asset of Community Value, the pub remained derelict for three years until Camden Council started legal action against its owners. It’s since been sold on, but remains shut.

The Carlton Tavern isn’t the only Maida Vale boozer facing an uncertain future, either. The Chippenham Hotel, another large pub in the area, was sold to an investment company in 2014 and is currently shut. Locals fear that, despite also being listed as an Asset of Community Value, it is still in danger of being demolished or redeveloped. These are not random London pubs whose trade has fallen off. They are all substantial old buildings, in or adjacent to affluent postcodes. They are remnants of a drinking culture that is disappearing, one where the pub was a focal point of the local community. Now their redevelopment value far outweighs their potential as businesses: they are worth more dead than alive.

‘[This kind of pub] is a cash cow,’ says Robertson. ‘Developers like these have seen an opportunity.’ Even if planning hasn’t been granted, some developers are prepared to take a risk, as Calif was with the Carlton Tavern. Geoff Barraclough, a Labour councillor for Westminster, has been involved in the Carlton Tavern campaign. He also sits on the council’s planning committee and has no doubt that there are loopholes being exploited: ‘We see a lot of developers who disobey planning instructions, build anyway then ask for retrospective approval,’ he says. ‘And quite often they get it.’ He hopes that the enforcement notice to reconstruct the Carlton Tavern will send developers a message: ‘It’s a warning to everybody else,’ he says. ‘If they do rebuild it, it will be a tremendous victory for the community.’ But when I ask him if he’s personally confident that the pub will eventually be rebuilt, he says: ‘I don’t know.’ 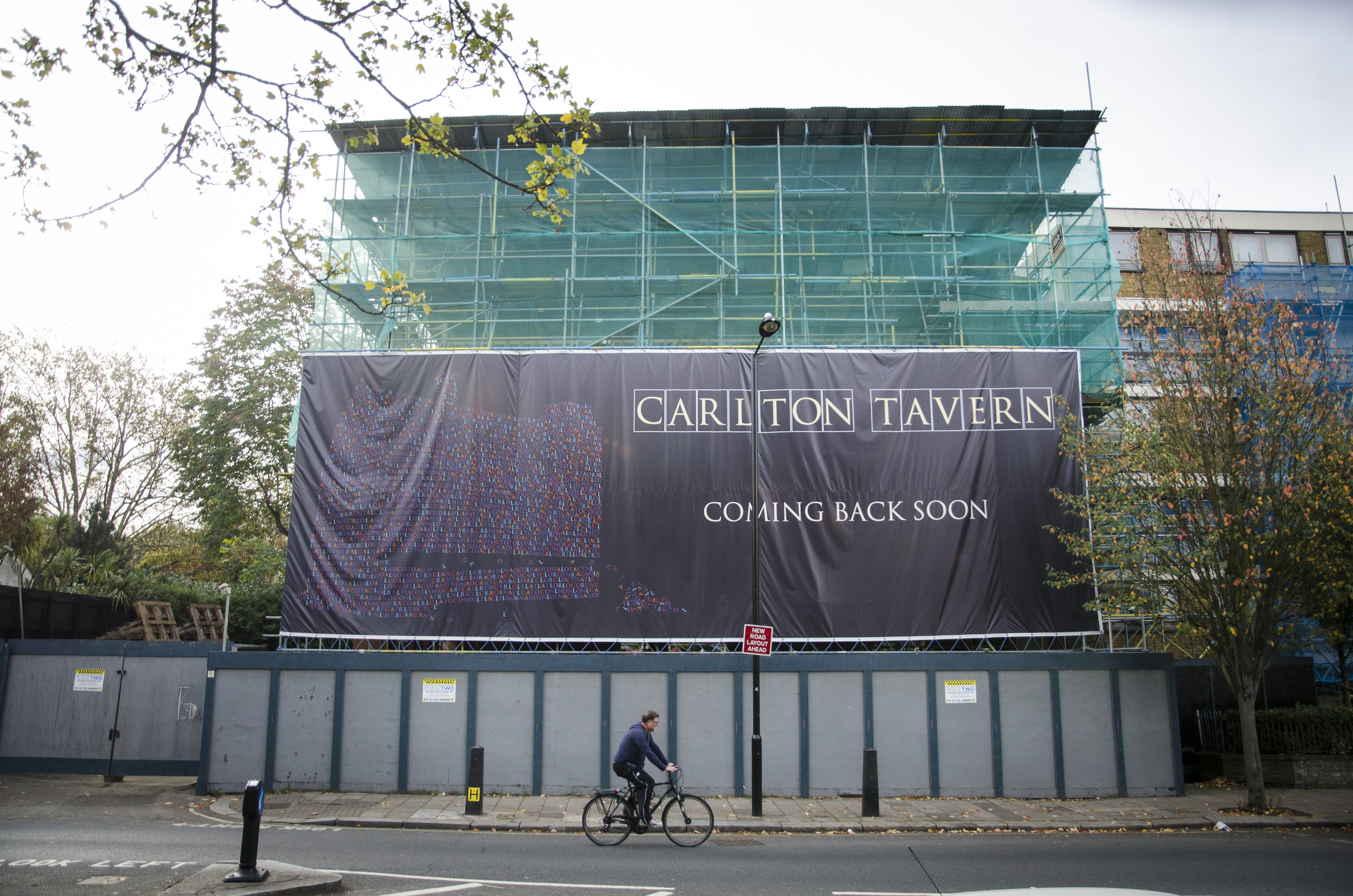 These pubs reflect disappearing London communities – grounded in the same areas for decades, co-existing as best they can with richer neighbours. Sitting on a fault line between working-class Kilburn and posh Maida Vale, the Carlton Tavern is emblematic of this issue. ‘People assume that everybody’s loaded [here],’ says Robertson, ‘but there’s a huge community who have been here for generations who can’t afford to go anywhere else. This [pub] was a hub for us.’

It’s telling that – according to Barraclough – Westminster City Council’s original refusal to grant CLTX permission to replace the Carlton Tavern with a block of flats was not based on any appreciation of the pub’s value to the community. ‘[They] were quite happy for them to demolish the building,’ he says. ‘They refused the application because the new building was too high.’

At heart, this is a story about social invisibility. While most of us wouldn’t be as brazen as Calif in our assessment of the Carlton Tavern, it’s easy to overlook or dismiss unreconstructed local boozers. Drinking culture is changing: Londoners increasingly demand nice food and craft beer. We don’t want the TV on all day or a constituent clientele of old men nursing pints. It takes an act as brutal as the illegal demolition of one of these pubs to expose the underlying issue: that there are people who have lived in this city all their lives who remain marginalised, vulnerable, unprotected and with few places to spend their time – a social inconvenience as much as the Carlton Tavern was a planning inconvenience.

‘This is a really old, 1950s-style community,’ says Robertson. ‘I think it’s important that we keep it alive. This London will be lost, and it’s just wrong. We mustn’t dismiss working-class people in this way. We shouldn’t be allowing this community to disappear. This pub is under our watch, and we are fighting to keep it.’

If the Carlton Tavern is rebuilt, maybe another developer will think twice before riding roughshod over a community and the law. But if it’s not and its customers are failed a second time, then the message that sends is a pretty bleak one. Perhaps a restored Carlton Tavern will be a PR-able destination drinking hole: either way, these Maida Vale residents might well not be part of its future.

CLTX were invited to comment but did not respond.