Could this amazing south London view soon reopen to the public?

In suburban Nunhead (that's between Peckham and New Cross, for confused north Londoners), next to the famous cemetery, lies Nunhead Reservoir. Not somewhere with ducks and rowboats, alas – it's a covered-over site – and it's not open to the public.

For the adventurous, though, it is known to have Quite A Good View indeed...

For some time, the site's fence went through cycles of repair and revenge, as site owners Thames Water attempted to secure the area, while others – teenagers with weed, families out to see the NYE fireworks, Jezebel journalists – tried to regain access.

Back in December 2014, however, a new, extra-impermeable fence was installed, along with other security measures, and access is generally no longer possible.

Local resident and Goldsmiths MA student Rosanna Thompson has decided to do something about it – all without bolt cutters. Determined to challenge the new 'more razor wire, fewer epic sunsets' status quo, she's set up a Facebook group, Friends of Nunhead Reservoir, to muster support for alternative solutions which offer a space to the local community. And naturally, there's a Save Nunhead Reservoir petition, currently at 2,000 signatures and counting.

From Wembley to the the City - best view in London? #nunheadreservoir #london #skyline #shard @glewis88

And Rosanna has also been investigating alternatives. There's a terrifically-titled paper (Trespassing on a Heterotopic Space of Resistance. A London Waterworks as the Site of Multiple Struggles for the Commons) and a podcast featuring memories and discussion of the space. In correspondence, Thames Water say that by allowing access they 'would be breaching the Public Health Act and causing a risk of contamination,' as it's 'a live service reservoir which supplies thousands of properties in London.' But she points out that in neighboring Honor Oak, another working reservoir has been put into use as... a golf course.

Whether her campaign will achieve its desired goal, we can't say, but if a way can be found to liberate more picnic-worthy green space for Londoners, then it seems a worthy endeavour indeed.

Sign the petition, or check out stunning photos of London at sunset. 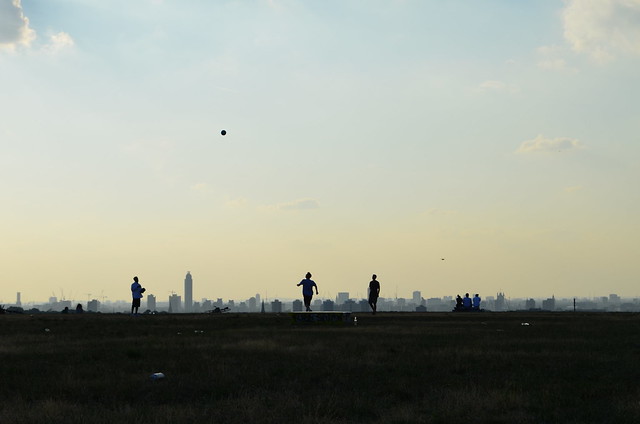