Hello, reader. What time is it for you? Morning, I’m guessing. Probably pre-work? On the tube? Good: the ideal hour for reading Time Out. Not quite the same for me, I’m afraid. Right now it’s 4.11am.

Given a life riddled with insomnia (the inability to sleep, not the crappy Faithless song) this is prime working time. Most nights I lie down, close my eyes and my brain goes into overdrive: fretting about tomorrow’s meetings. Endlessly replaying conversations. Sometimes I fall asleep, then wake up every hour as my mind worries itself out of sleep mode, usually over utter nonsense. Christ, I recently spent too long playing ‘Football Manager’ and kept waking up with my mind whirring about how best to deploy Wayne Rooney. And that is not a face anyone wants haunting their thoughts during the long, dark hours of the night. Sound familiar? Quite possibly: across the UK, one in three people reports suffering from insomnia. Which, according to the NHS, makes it ‘the most widely reported psychological disorder in the UK’ (we had no idea it was a psychological disorder, either).

‘If you’re having sleep problems, you should really cut out alcohol,’ says Dr Irshaad Ebrahim, the centre’s founder. Really? ‘Yes,’ he says, before explaining that regular alcohol intake can upset your ‘sleep mechanism’, leading to disrupted sleeping patterns. But a booze-free life? That doesn’t sound like much fun. ‘No, a huge part of living in London revolves around alcohol,’ he concedes. ‘But you need to make a choice about your priorities.’

So I make that choice. I pick an easier option: not giving up booze and napping during the day instead. A study into daytime snoozing by sleep researchers at Harvard University found that ‘a nap is as good as a night’s sleep’ in terms of its benefits for mental performance. And, according to Vincent Walsh, Professor of Human Brain Research at UCL: ‘It’s only since the industrial revolution that we have been obsessed with squeezing all our sleep into the night rather than having one or two sleeps through the day.’

In fact, there are now companies installing ‘sleep pods’ in offices in order to ‘improve wellness in the work environment though napping and rest’. So, who needs to sleep at night anyway? ‘We get a lot of take-up in London,’ explains Jon Gray of Podtime, which sells the contraptions in 11 countries, its clients ranging from Aussie Rules Football teams with knackered players to rehabilitate to international data centres whose engineers are on site 24/7.

‘Whenever we install them, the staff love them.’ Said staff must also be fans of things that look like gigantic yoghurt pots lying on their sides. Because when I go to try out one of the sleep pods at app developers Potato, that’s exactly what it looks like. I slide into the white plastic tube and lie down. There’s a thin mattress, a light blanket, even a little shelf to put your phone on. At one end of the tube is a pull-down plastic door to shut the world out. I close it and lie back. Inside, it’s actually pretty cool, like trying to catch 40 winks inside a spaceship. It’s as if the future has warp sped its way into your office, albeit with more people fingering Excel spreadsheets.

Unfortunately, I quickly realise that one crucial piece of technology has been left out of my Buck Rogers-esque bunk bed: soundproofing. As I try to drift off, it transpires that the World Foot Clumping Championships are taking place outside. Worse still, I’m situated next to an espresso machine which operates at the same volume as a Red Arrows fly-past. 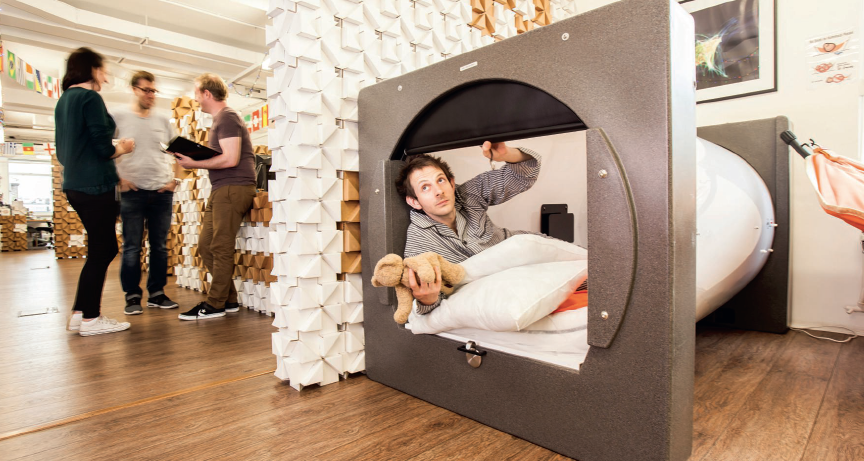 After 15 minutes, one employee strikes up some office bants that can be enjoyed equally by nearby colleagues and anyone who happens to be in the same postcode. I finally crack and open my sleep-pod hatch, ready to yell at the huge baying mob outside, only to find three employees having a quiet chat by a gently humming coffee machine. Yeah. Perhaps napping in the workplace isn’t that viable a solution to insomnia.

So next I look into ‘day use hotels’, i.e. ones which hire their rooms out at an hourly afternoon rate to let people grab micro-sleeps. This sounds good, until I discover that the cheapest I can find on dedicated website Dayuse.com is £39 for two hours. Which seems a bit steep for a snooze.

Plus, the more I investigate it, the less convinced I become that when they say ‘nap’, they don’t mean ‘filthy philandering shagathon’. Or at least, there’s no other explanation I can think of for questions like: ‘Want to nap at a hotel discreetly?’ Or: ‘Like to have a nap with your love at a hotel?’ Or their referring to them as ‘love hotels’. Never mind 40 winks, this feels more like ‘Fifty Shades’.

Apparently there’s no other option, then. My only choice is to head back to the London Sleep Centre and their lack of enthusiasm for alcohol. Fortunately, it’s not as bad as I fear.

Plus I’m not allowed lie-ins.

Then there’s the pre-bed routine: 45 minutes of breathing exercises followed by writing down a to-do list in a hardback notebook, then slamming it shut loudly, so that if my mind wanders on to tomorrow’s tasks during the night, I can recall the slamming sound and move on. And all this has to continue for three months. But at least I get to still drink some booze, right? Should be a doddle!

At first, I don’t think it is working. Because I don’t feel worse. I just feel as sleep deprived as ever. But slowly things change. After about a month, I’m starting to sleep well most nights. The breathing stuff is surprisingly relaxing and without midweek booze, I’m happily hangover-free. After two months, I’m sleeping soundly every night. Result! The only thing: I don’t really want to live like this for the rest of my life.

I don’t want to never have a lie-in. I don’t want to always watch what I’m consuming at what time of day. So if this is the price of slumber, I wonder if it’s worth it? London life might well mess up our ability to sleep. But there’s a reason that we still choose it: it’s fun. If our main desire is sleeping soundly, maybe it’s just not a good idea to live in a 24-hour city. I go to throw the notes from my sleep consultation in the bin and spot something. ‘Once you’re sleeping properly, you may throw this whole plan out of the window.’ So I do. I celebrate with a beer and I sleep like a baby (minus the crying and crapping myself). Is there a long-term option for sleeping well in London? I don’t know. But in the short term, this’ll do the job.