Many club nights claim to be influential, but iconic after-hours party Trade really was, as its final party – at north London club Egg – will demonstrate. Just ask Grace Jones, Björk, Madonna, Alex James or Jean Paul Gaultier, who all attended Trade over the years at its original location, Turnmills in Islington.

Started over two decades ago by Laurence Malice as London's first legal after-hours event, Trade's punters partied hard - really hard - at this wild night, as did its DJs. Popular with gay crowds but very much open to all, Trade was a unique, event that stamped its mark on London's nightlife map.

As it draws to a close with one final party, its legacy is being celebrated with a new exhibition at Islington Museum. 'Trade: Often Copied, Never Equalled' (on display now until January 16 2016) features all kinds of fascinating photography and memorabilia from Trade's huge run at (now sadly demolished) Turnmills, showcasing it as a night that truly captured the spirit of its time. Here are seven reasons that made Trade crucial alongside seven eye-catching exhibits from the exhibition.

Seven things that made Trade legendary 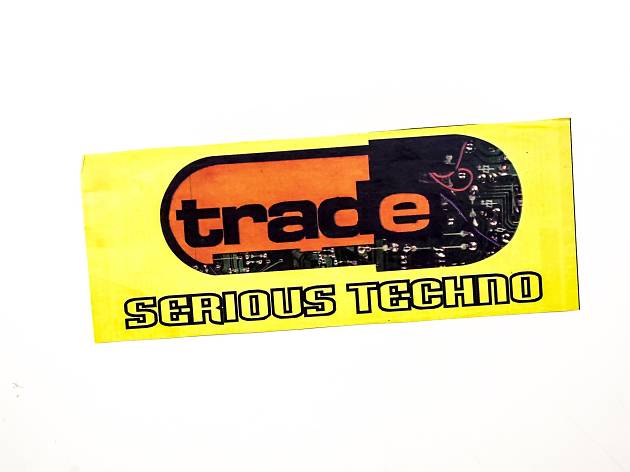 Breaking news: most clubbers don’t stop partying at 3am and go to bed. Despite this well-known fact, venue owners were always reluctant to run events that kicked off in the middle of the night. Trade finally took that step. ‘At that time, 1989, there wasn’t anywhere legal open past 3am,’ says Trade founder Laurence Malice. ‘It was the first ever legal after-hours club, opening at the unheard-of hour of 3am on Sunday morning. To have somewhere you could count on every week was game changing.’ 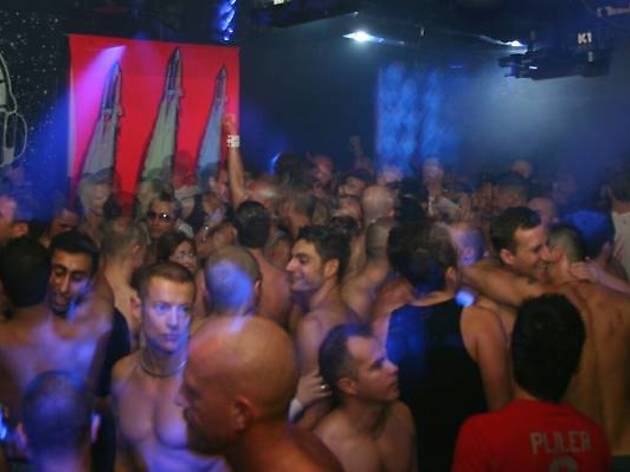 Through an inclusive, hedonistic atmosphere based on the party rather than the crowd, Trade unified various groups, including gay and straight revellers: ‘Trade pushed forward mixed clubbing, which we take for granted now’, says Anne Marie Garbutt, curator of ‘Trade: Often Copied, Never Equalled’ – a new art exhibition at Islington Museum and a regular at the night. ‘At the time, even the gay scene was split between male and female,’ she continues, ‘but Trade brought them together. It was revolutionary.’

Trade also changed perceptions, as Malice explains: ‘It was about a positive image of gay people. The government’s propaganda around Aids was scaring people and there was a lot of ignorance and hatred towards the community, but at Trade, bankers danced next to pop stars, muscle boys next to stage actors.’ 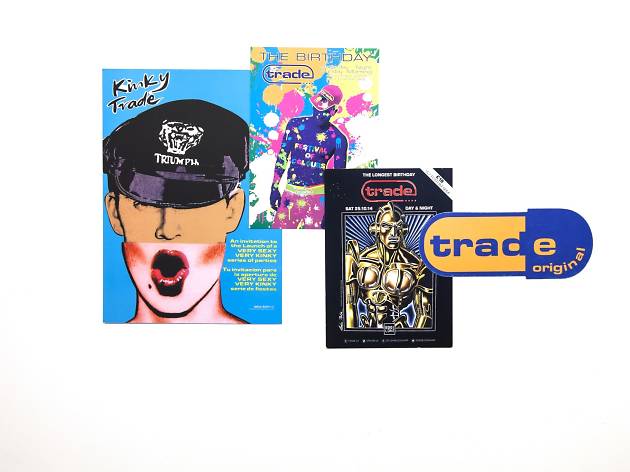 Before social media, getting people to attend your night was down to word-of mouth and thrusting printed flyers into as many hands as possible. And at a time when every club in the land was also doing the same, it was essential to make your flyers stand out. In Trade’s case, this meant colours brighter than the sun, retro-futurist graphics, plenty of pictures of beefy guys with their pecs out and a generous helping of smut and pure bad taste.

Luckily, they narrowly avoided producing the ultimate bad-taste flyer, as Malice recalls: ‘Grace Jones came down to the club in person one night, but on our eleventh birthday we flew in a Grace lookalike from Los Angeles. The flyer artwork for the night showed Grace and the Twin Towers, tagged “11 sky-scraping years”. Then we started to hear about a plane crashing into one of the towers… We changed it to Grace licking the Chrysler Building and tagged the event “Madhatten”. 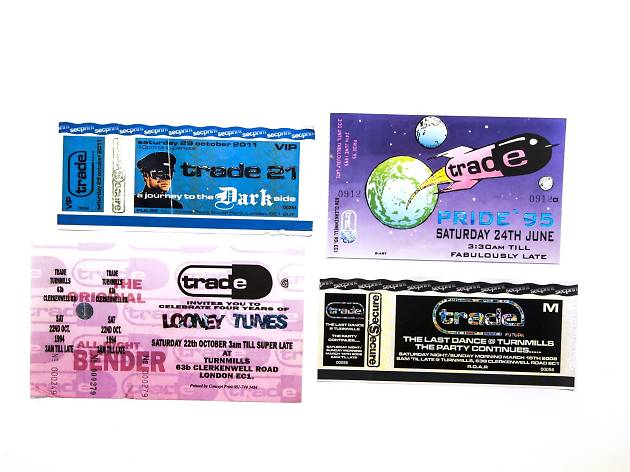 The visual aesthetic of Trade wasn't just a gimmick to entice people in, it also extended to the painstakingly designed tickets, which rewarded those who queued up and paid their entry fee with images that were just as eye-catching as what went on inside the club. Membership cards and VIP passes were just as memorable – an access-all-areas pass with a cartoon of a bronzed, topless astronaut, anybody? Such collectable artefacts are unthinkable in today’s world of QR code club queues and purely functional printed tickets. 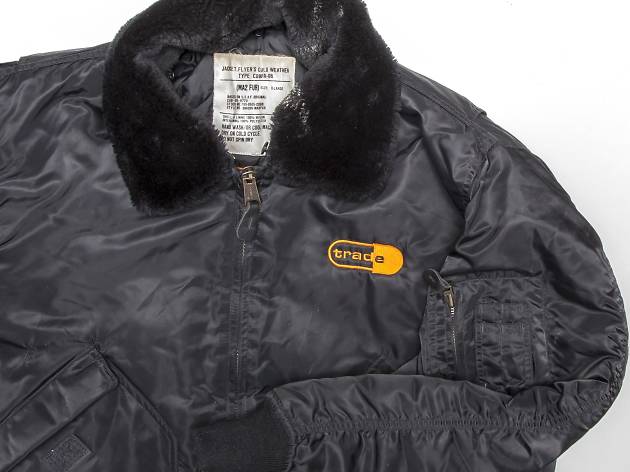 At a time when superclubs were fighting for punters’ attention, it was crucial to establish your club as a brand. The ultimate demonstration of this was shoving your logo on to something that clubbers would appreciate. In Trade's case, this meant an obscenely chunky, jet black, fur-collared bomber jacket - hardly flattering, but great for keeping warm in long, freezing club queues. The amazingly ’90s Trade logo was also stamped on to similarly pitch black record bags, which were great for communicating your vinyl-loving credentials to other clubbers. 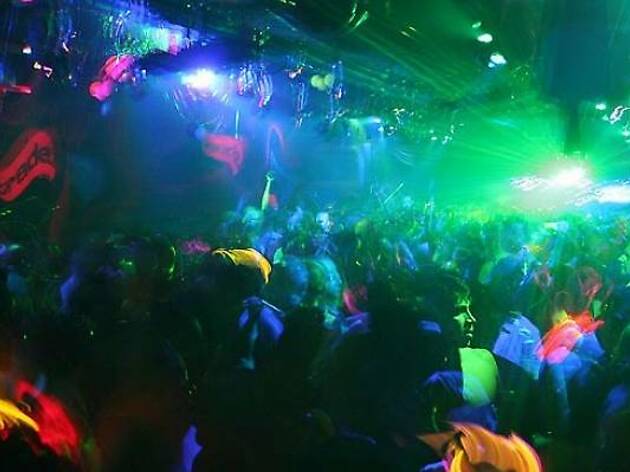 Nowadays, DJs are, frankly, boringly professional and business-like. This wasn’t always the case, as early Trade resident DJ Smokin explains: ‘Everyone was taking a lot of stuff, especially the DJs. One night I overdid it and fell asleep under the decks. The record ended and everyone was running around trying to find me. I was where everyone put their coats – I think I was a bit cold, I was probably just wearing hot pants and a bra.’
Advertising 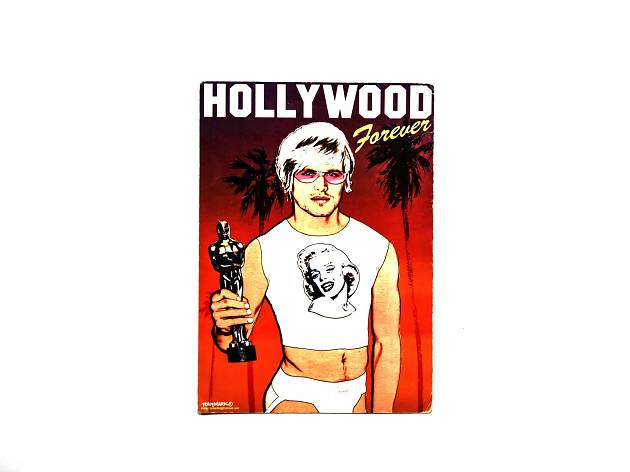 Word of Trade’s legend spread fast, and soon it was a place to be seen: cue a host of celebs appearing in the queue. ‘I believe Cher was turned away,’ remembers Malice ‘because there was literally no more room in the club and she had a certain amount of demands. We didn’t let Axl Rose in, either, because he’d made certain comments. He came to the door apologising, but we said “No, you’re not coming in, mate. On your bike.”’