My Account My Profile Sign out
My Account
Search
Worldwide Europe United Kingdom England London Matthew Perry interview: ‘Peter Hitchens is one of the few people I can beat up’
Advertising

‘I’m not a fatty any more – stay off the medication!’ Matthew Perry is in high spirits, looking trim, fit and cracking wise like the character that made his name. His whipsmart performance as Chandler Bing in ‘Friends’ established his credentials as a gifted comic actor, making him not only very rich, but also beloved of millions. (The chances of a reunion, by the way, are ‘almost zero’.) And also, it has to be said, not always very happy.

While friendly and generous with his time, Perry is both fiercely self-critical and rather guarded. Understandably so, given some brutal treatment at the hands of the press after a series of patchy roles away from Central Perk in workaday romcoms (‘Fools Rush In’), promising but short-lived series (‘Studio 60 on the Sunset Strip’) and tantalising cameos (‘The Good Wife’, ‘The West Wing’). As well, of course, as some very public battles with addictions to alcohol and prescription drugs that saw his weight fluctuate wildly.

Now clean, he’s a vocal advocate for treatment over punishment in drug policy. These days, he’s as determined to stay on an even keel personally as he is to experiment in his work, starting with the most peculiarly charming film of his career.

‘The Dog Thrower’ is a short comedy-drama about public shaming, written and directed by journalist Jon Ronson (who sits in on our interview), in which the titular gift shared by Perry and onscreen rival Tim Key shunts them from anonymity to adoration to opprobrium. ‘It finds humour in the horror,’ reckons Ronson. Perry’s response is instant. ‘That’s the title of my autobiography, right there.’
‘The Dog Thrower’ is about two guys who find opinion turn against them while they’re doing something people love. Did that ring any bells?
‘That was what my experience of “Friends” was like. The press adoring us and then turning, even though we were doing the exact same thing. In 1994 we premiered and were on the covers of all the magazines, then in 1995 we were finished, we’d had our day. Then in 1997, we were back!’

The ‘Friends’ finale was watched by 55 million. How did you not go mad under that scrutiny?
‘Well, I did. It’s been well documented that I went kind of crazy. It’s not a normal thing. And the sheer bitterness and meanness… It took me ten years to learn not to read it [the criticism]. I went to a Los Angeles Kings hockey game in New Jersey as a Kings fan, and my face was put on the screen and I was booed by 20,000 people. But I couldn’t get out of the building at the end of the game because people wanted my autograph. I was like, “You all just booed me!” Five hundred different people went, “Hey, it wasn’t me! Can I have your autograph anyway?” That’s how strange it is.’

At least people have an opinion about you.
‘Yup. But you can’t dwell on it. Back when I used to go to bars, people who’d had a few drinks would shout, “Hey, you’re Chandler from ‘Friends’!” Now, I’d heard this a million times, so I’d go [slightly reluctant-sounding] “Yes, yes, I am.” And they’d immediately go, “Oh, what an asshole!” People expect you to be a certain way, and when you’re not, they turn on you. Now, I just avoid going to those places.’

Does it irritate you that people still conflate you with Chandler?
‘No, it’s been a long time. I haven’t played that character in ten years, but I don’t resent it. I wouldn’t be sitting here, I wouldn’t have done the things I’ve done without it. Even so, being in the public eye… What you want out of fame is an on/off switch. If you need something, fame is great. If you want to go for a walk, well, I can’t do that any more.’

How did you get involved with ‘The Dog Thrower’?
‘I read a book of Jon’s called “The Psychopath Test”, which I loved and got obsessed with. About a hundred pages in I looked up whether it was fiction, because I couldn’t believe it was true. I tweeted that everyone should read the book. Then I got a phone call asking if I wanted to do a short film with Jon and said yes without even reading it. The only thing I put in my deal was that I got to have dinner with Jon. On the day of the dinner, I realised I still hadn’t read it, and so I did. I didn’t fully get it, but I was in.’

How did you find the shoot?
‘Everybody was nice. Everyone knew we were working on something that was a little odd, but everybody had fun. It was raining, it was cold, I had a cold the entire time we were in parks throwing dogs in the air. I should point out no dogs were harmed in the making of the film – they were working near flames, so I had to check someone had an extinguisher! Anyway, we shot in Wimbledon for six days, and I wasn’t sure whether it would come together. But it does, as this very peculiar, charming little entity. It stays with you, it’s a conversation starter. Jon was having so much fun and was so open to ideas. He wasn’t a tyrant. I liked him instantly, I hope it starts a long relationship.’

Do you enjoy working in London?
‘I do. I spend some time in the casinos there, and I have some friends there. We went to watch some tennis at the O2 too.’

Your next project is rebooting ‘The Odd Couple’ for television. Are you nervous about taking on something that iconic?
‘There’s a story about it on one website and there are already 30 negative comments. It hasn’t even started! But it’s okay, the trick is not to read it. The newness is in me playing Oscar and whoever plays Felix. The hardest thing will be not imitating Walter Matthau the whole time. They say don’t remake anything that’s perfect, but this is going to be different enough: we’re modernising it. We’ve kept two lines from the movie: “In other words, I’m getting on your nerves. Not in other words, those are the perfect ones!”’

You had a rough ride when you did ‘Sexual Perversity in Chicago’ in the West End in 2003.
‘Talk about getting bad reviews… The play did very well, it broke records for advance ticket sales. But, oh my God, the things they said about me. They didn’t like Hollywood Actor Boy coming to London.’

Would you ever go back to the theatre?
‘I’m not the biggest fan of plays. I like new stuff and with theatre you’re just repeating yourself. I wasn’t using my brain any more. I was doing monologues in front of 900 people and wondering whether to have chicken or steak that night. If you’re doing TV or movies, you’re always moving on to the next thing.’

When did you first realise you were funny?
‘Probably when I got into trouble at school for making kids laugh. I had this move where I made fun of people’s shirts and stuff – the lowest level of comedy – then these big kids would come up to hit me and I’d trip on purpose and fall. Then the bully would laugh and walk away. If I knocked myself down first, the other guy wouldn’t bother.’

A lot of your characters are all about the gag. Are you comfortable with silence?
‘I’ve become someone who is. Chandler was a character who was not. All his comedy came out of his discomfort and need to fill the silences. But there was a lot of physicality to him as well, because he didn’t want anything inward to come out. I could relate to that a little.’

You don’t tweet any more…
‘I take little breaks. You use Twitter when you’ve got something to promote. I’m not a fan of using it to say what I had for dinner. I stay off Twitter when there’s nothing to talk about. It’s a feedback loop.’ 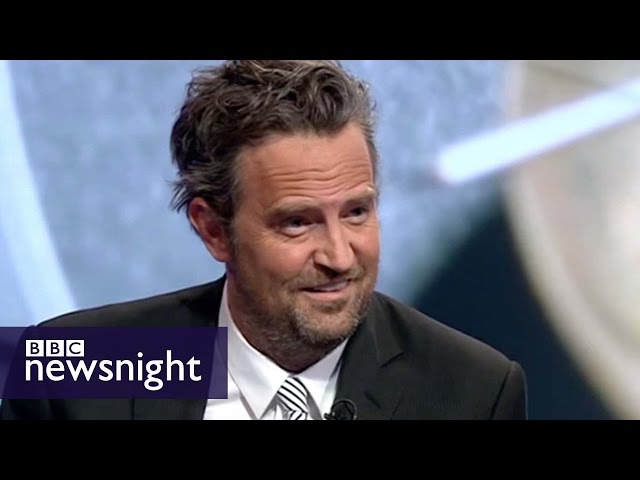 Your most recent UK TV appearance was on ‘Newsnight’, discussing addiction with Peter Hitchens.
‘Yeah. I was shocked by that. When he said that addiction was a fantasy, I didn’t know what to do. I made a move to hit him, because he was attacking something I’ve spent so much of my life battling. He happens to be one of the few people I can beat up! To be on stage with someone so misinformed and so pompous… They sent us through separate exits after the interview.’

Do you mind holding yourself up as a cautionary example?
‘I’m someone who came out the other side, who can live in a sober, happy fashion even when there’s work to be done. If you’re having a problem, speak out because it can be a very isolating disease. It wants you alone. I want to ask Peter Hitchens: did Philip Seymour Hoffman just feel like dying? No, he had a disease that made him do it.’

You’ve said that you gravitate towards broken characters who try to be better people. Why?
‘My favourite movie is “Groundhog Day”: that journey to be a better man is interesting and often comical – mistakes happen along the way. I was an egomaniacal jerk when I was 25. I’m 44 now and hopefully much less so.’

Does that come with age?
‘It comes with the shrinking of ego, the realisation that everyone’s flawed. If I chose to believe the press around “Friends”, then I was special. And I did choose to believe it for a little while, but it caused a lot of problems in my life. The good things are never good enough, the bad things destroy you. When you realise you’re one of many people, you’re saved.’

Do you have any ambitions left?
‘Workwise, I’d like to become a better writer. I’ve written two drafts of “The Odd Couple” and my strong point is dialogue, but I’d like to get better at structure. But my goals are more in life than work – meeting the right woman, starting a family. Continuing my quest to help people who can’t stop drinking moves me a lot. And trying to become a better man.’ 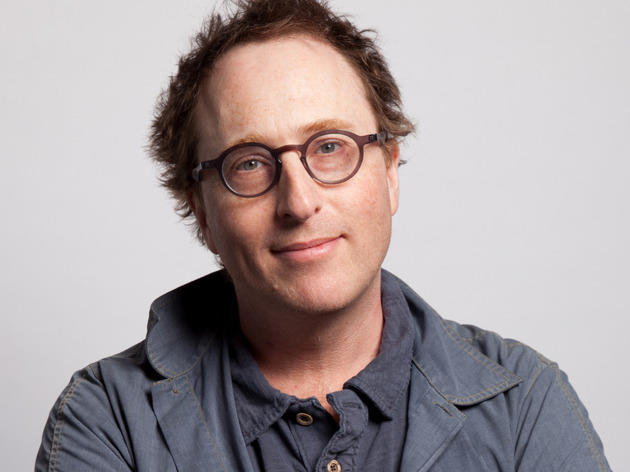 We talk to the journalist and documentary filmmaker about his (fictional) directorial debut, ‘The Dog Thrower’ 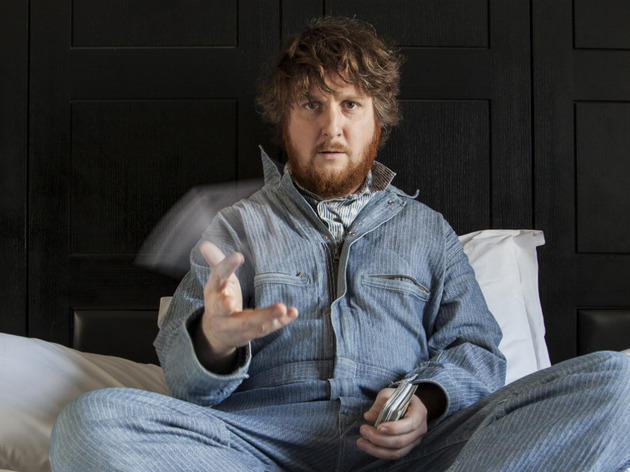 We get into bed with the Edinburgh Comedy Award award-winning poet ahead of his new show, ‘Single White Slut’