'Gas, gas, gas’ howled Mick Jagger in 1968, neatly summarising the state of British brewing at the time – all Jumpin’ Jack Flash, no soul. Revolution upon revolution has swept beerdom since those fizzy, heady days, but the problem of how to keep draught brews in peak condition for home consumption has remained. Pasteurisation, carbonation and canning can rob a beer of its character, and the old half-gallon flagons leave ale flat within hours. Domestic effervescence seemed beyond our grasp.

Enter the growler: a glass vessel that, via the US, has ushered in a new way of conserving draught beer for home drinkers. Buy one and have it refilled as often as you like. Bars and craft brewing shops across our city are giving it a try – and London’s drinkers seem to approve.

Kai Hoffman, manager of Bottledog – a bare-boards beer and homebrew shop owned by Scottish craft brewer Brewdog – demonstrates the process. He inserts a one-litre glass bottle into the growler station (a see-through container that protects the operator should the glass bottle explode under pressure). A seal is made by raising the growler using a vice-like screw, then carbon dioxide is dispensed into the vessel, displacing the (lighter) air. When this is complete, beer is pumped in from the keg, leaving a thin layer of CO2 at the top (which is where real-ale hardliners take issue). Pop on a Grolsch-like stopper (by hand) and the beer will remain in peak condition for a week to 10 days. Hoffman provides a tasting of one of the week’s specials: Beavertown Prop Saison – dry, light, aromatic and deceptively strong at 6.1% abv. It is also enticingly effervescent rather than gassy – a fine advert for the growler process. ‘We have four lines [from 30-litre kegs] that are rotated once a week’, says Hoffman. Around 120 litres are sold each week in one- or two-litre growlers – not bad for a small shop that only began trading at the end of April. Growlers cost £5 (1l) or £10 (2l) with fills ranging from around £6.50 to £8.50 per litre.

So, where did the term ‘growler’ come from? ‘It’s originally Victorian’, explains Tom McKim of beer shop Clapton Craft, ‘from the sound of escaping gas when the bottle was opened’. Tom and his business partner William Jack started trading in April 2014 and already they’re averaging 300 fills per week. The growlers cost £6 and when full contain 64 US fluid ounces of beer, which equates to 1.89 litres or around 3.33 pints. Though the process here is similar to that used at Bottledog, these growlers are sealed with screw-tops and, they claim, will keep beer fresh for six weeks. Plastic one-litre bottles are available too, and can also be filled with the likes of cider or lager from Crate Brewery (based in Hackney Wick).

Around two-thirds of the beers we sell in growlers come from London craft breweries’ enthuses Tom, ‘with the rest coming from elsewhere in the UK, the US and Europe’. The four lines change every week, and have recently included Table Beer from Bermondsey’s Kernel Brewery; Weird Beard’s dark ‘FTB’ (‘Fade to Black – Coconut’); Tempest Pale Ale from Kelso; and Brodie’s London Sour (Redcurrant edition). ‘We try to put a variety of beers on, including those that aren’t available in bottles’.

So will the craze last? Its advocates certainly think so. ‘It’s just a convenient way of buying beer’ explains Nicola Talbot of Camden Town Brewery, ‘and it’s cheaper too if you refill regularly – when you buy in bottles, it’s like you’re paying for the glass each time’. CTB was among London’s first craft brewers to offer its beers in growlers, starting over a year ago. It now also supplies beers from other London breweries, such as Beavertown. A 1.6-pint growler here costs £2.50 for the bottle, £5 for the fill; a 3.4-pint growler is £5, then £10 for the fill.

Growlers are certainly building up a head of steam. In Balham, We Brought Beer started trading in August and has imported its weighty brown vessels (pictured above) from the States – which explains their hefty £12.50 price tag. Owner James Hickson is a firm fan: ‘We have four draft taps for growler beers. We will be revolving the beers to keep the range fresh and we will usually try to get something on keg that isn’t available in bottle… People definitely like the concept when it is explained to them… We are already having to source more growlers to keep up with demand.’

In Bethnal Green, Steve Taylor, manager of Mother Kelly’s, is putting the finishing touches to his bespoke beer-dispensing system and is hoping to launch the takeaway service in about three weeks. Beer will be sold in four-pint ‘flagons’ (Taylor is keen to get away from the Americanisms associated with new-wave craft breweries) and initially there will be a choice of eight brews available, from English microbreweries such as Siren, Marble, Magic Rock and Wild Beer. The flagons, like growlers, will contain the beer under a blanket of CO2.

You may not be able to bottle the conviviality of a pub or bar for home consumption, but if you’re fed up with the ephemeral quality of takeaway draught beer, a growler might just stop you grousing. Expect to see a substantial beer-holding vessel at a dinner party near you soon.

Phil Harriss is a pub landlord at the King’s Arms.

Where to pick up your growler 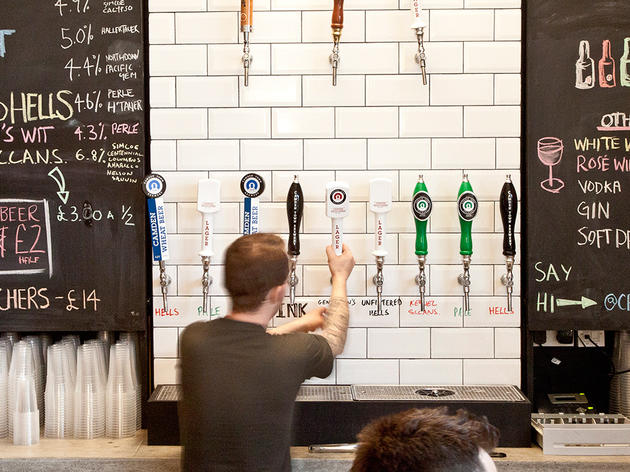 When its issue began gushing forth in 2010, the Camden Town Brewery became the third biggest beer producer in London by volume, behind Fuller’s (No1) and Meantime (No2). Camden Town’s marketing is clever, the labels are smart – and the beer is fantastic. Its railway arch premises at Kentish Town West have already proved inadequate in size, and fermentation tanks have been moved outside. 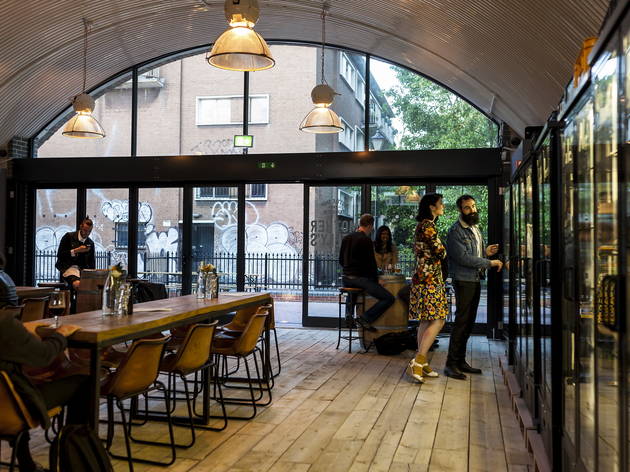 Mother Kelly’s is a self-proclaimed ‘taproom and bottle shop’, or, as they’re usually known, ‘pub and off-licence’. But it feels different, so let’s allow this affectation. It is indeed a room with taps in it and not much else, save some plain furniture and a big ‘Wild Style’ graffiti-inspired NYC taxi mural. 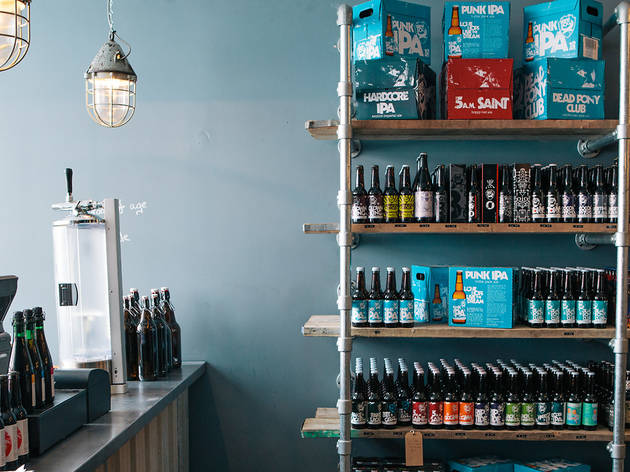 BottleDog is the first bottle shop from the craft beer experts behind BrewDog. Expect over 250 beers by the bottle from all around the world, as well as growler fills for those looking for the fresh taste of a pint poured down the pub delivered in the comfort of their own home. Staff are also on standby to offer advice to homebrewers. 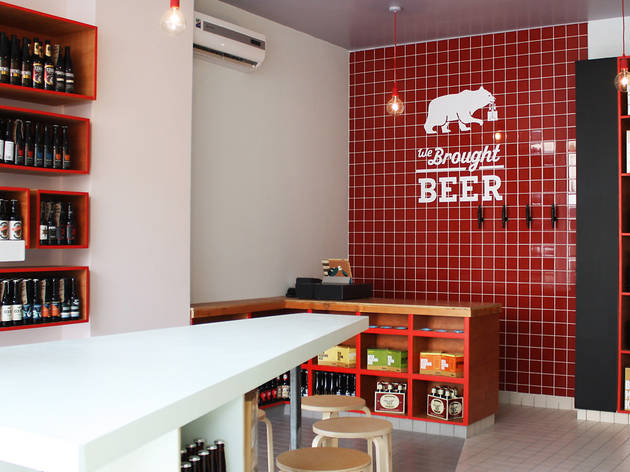 This Balham craft beer shop offers 150 different beers from 30 different breweries, and if you'd like to have a go at brewing your own they also sell brewing kits and guides. We Brought Beer have beers on tap to sip on whilst browsing or to take away. 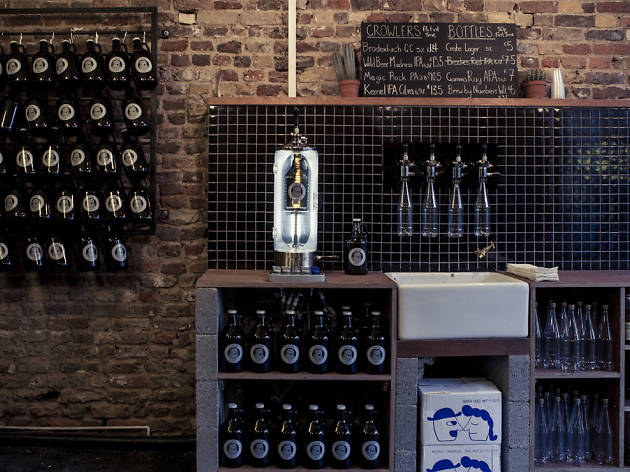 This trendy craft beer shop in Clapton puts an emphasis on growlers, refillable bottles popular among keg beer enthusiasts. The shop also stocks a range of craft beers by the bottle supplied by brewers within the Hackney borough and beyond. 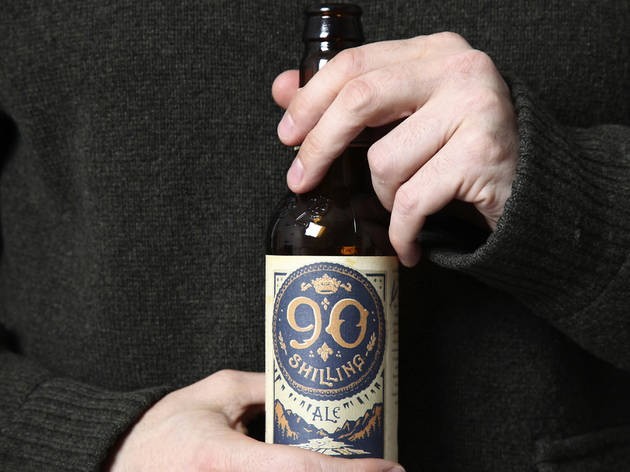 When a can of Carling isn't going to cut it, seek out one of these specialist shops and take your pick of some of the most exciting beers from microbreweries in the UK, Europe, the US and beyond 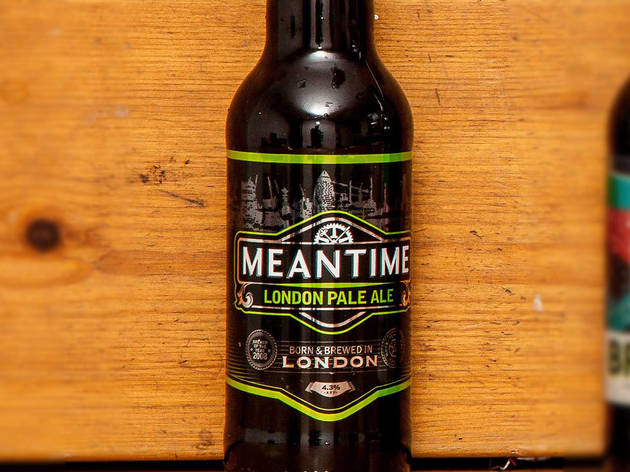 From pale ales to porters, we salute the city’s finest, craftiest brews. Cheers!