London's LGBT community is probably more extensive than you realise. The capital is widely acknowledged to have the largest gay population in Europe and a 2015 survey by the Office for National Statistics found that Londoners are nearly twice as likely to identify as lesbian, gay or bisexual than people living in most other UK regions.

London's gay community is also especially well integrated. According to a 2014 YouGov survey, Londoners know an average of 8.5 gay men and 3.6 gay women. Though the second figure is surprisingly low in comparison to the first, both numbers are comfortably above the national average.

Increased acceptance coupled with rising rents and the growing popularity of dating apps has caused a number of London's most famous gay bars to shut down. But the capital still has a diverse scene that varies in vibe according to location. Whereas many Soho drinking dens are young and buzzy, south London venues like the Royal Vauxhall Tavern (RVT) tend to attract an older and more relaxed clientele. As you'd expect, east London hang-outs like The Glory are generally the city’s edgiest.

Londoners love to bitch about G-A-Y, which runs two separate Soho bars and several weekly club nights at Heaven, a huge cavernous venue under Charing Cross station. But there's something comforting about this London institution's continued popularity. G-A-Y is always there if you need it, serving £1.70 drinks from Monday to Thursday to someone even drunker than you, right before he slut-drops to a Nicki Minaj song.

5. London's LGBT scene is more diverse than you realise

London also has an LGBT club night to suit just about every taste. Hard Cock Life drops hip hop beats for homos, Pink Glove spins indie tunes for gays who prefer Morrissey to Madonna, and Bombshell is a Wednesday evening treat for drag queens, trans people and their allies and admirers.

Because London's LGBT scene is so well-established and welcoming, it's been known to attract some unlikely punters. Judi Dench has spent a night in Heaven, Princess Di is rumoured to have visited the RVT dressed as a man in the '80s, and Helen Mirren showed her face at a gay pride event in 2013 to apologise for shouting at rowdy Soho drinkers who'd disturbed her while she was performing at the theatre across the street. No sign of Maggie Smith at Molly Moggs yet, though.

6. There’s an LGBT group for everyone in London

London is also supported by some brilliant LGBT charities. London Friend has been providing counselling to LGBT people since 1972, Metro is an equality and diversity charity focused on the capital and surrounding areas, and East London’s ELOP offers a range of holistic support services to local gays and lesbians. LGBT rights charity Stonewall and GMFA, the gay men's health charity, are based in London too.

8. London is home to some LGBT-focused hidden gems

London is home to some valuable LGBT amenities too. Outlet is a gay real estate agent, Prowler and Clonezone sell sex toys and fetish gear in Soho, and Open Barbers and Barberette are pioneering queer and trans-friendly hairdressing salons. The UK's only gay and lesbian bookshop, Gay's the Word in Bloomsbury, celebrated its thirty-seventh birthday earlier this year.

9. Londoners are stronger when we stand together

Though London is a great place to be gay, we shouldn't get complacent. 'It's important to remember the specific challenges that people who represent different parts of the community might face,' Matt Horwood of Stonewall tells Time Out. 'Dual discrimination is the reality for many LGBT folk, who are often victims of discrimination from within our own community. It’s vital that we continue to stand by the side of every single lesbian, gay, bi and trans person, whether you yourself are LGBT or not, so that London can continue to shine as the global beacon of equality that we know it is.' Amen to that.

Prime for the parade… 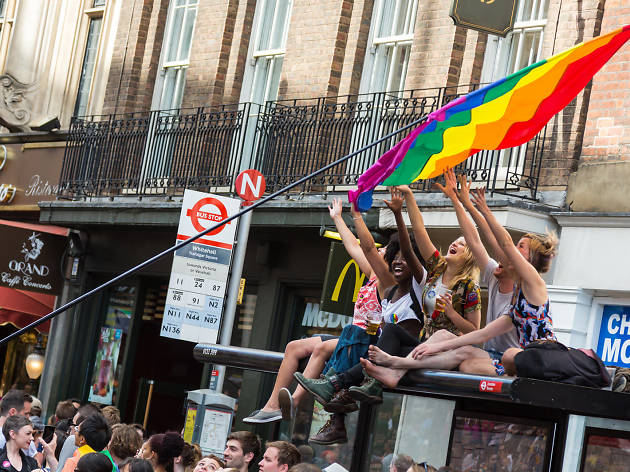 London’s annual gay pride parade and festival champions LGBTQ+ identities, history and achievements in a carnival of fun and glitter. Here’s all the key info for the event.