Pivotal in Vauxhall’s gay scene is Eagle London, one of the city’s most vibrant and much-loved LGBTQI venues. Both boozey and cruisey – with a distinctly male (often muscly) clientele – it’s a big, clubby pub that’s been a mainstay of gay London for more than a decade now. Yet what always distinguished it from other venues was its sex entertainment licence. For the past decade, the venue has held a licence permitting sexual activity on the premises. Eagle London’s owner, Mark Oakley, spent years working with Lambeth Council to create ‘a very strict code of conduct’ which made the venue’s dark room a safe hook-up space for gay men, and one regularly monitored by local police. But in a sign of how London’s nightlife scene is changing in 2016, Eagle London has decided it no longer wants to make use of its council-awarded sex entertainment licence – as Oakley seeks to secure the venue’s future by attracting a new and more diverse crowd. It may be too strong to call it gentrification, but it’s definitely a case of out with the lube, in with the craft beer.

The roots of the change go back about four years, when Oakley started realising that the  venue’s  dark room was becoming less popular as more gay men used apps like Grindr to hook up. He also noticed an ‘evolution in drug culture’ on the LGBTQI scene, making it harder to keep his venue clean. ‘You can search all you want, but if someone’s pre-loaded with GHB and they’re not “up” yet, it’s very difficult for your guards to tell,’ he says ruefully.

One Saturday last December, Mark was called down from his flat above the venue to find a man lying naked on the dancefloor, out cold. Thankfully Mark managed to find a pulse, but the subsequent arrival of the police threatened the venue’s reputation within the community. It convinced him to make a drastic change.

‘We really are open to everyone now'

‘I said: “Right, we’re going to do a refit and we’re going to move away from that market 100 percent.” We’d been running a very clean sex night called R18 which had won awards and I was very sad to be cutting off that income stream. But I made a decision that it was time to invest money into making Eagle London a venue that will suit the community going forward.’

As of this month, the dark room has gone and Eagle London’s interior has been transformed, thanks to exposed brick walls and a sleek wooden bar inspired by trips to New York’s trendy Meatpacking District. Mark has also installed a swanky new sound system to cement the venue’s reputation as a home of cutting-edge club nights like the world-renowned Horse Meat Disco, a Sunday-night staple at Eagle London for the last 12 years and a major part in the huge revival of disco music in dance music today.

At the moment, Oakley thinks the venue’s ‘blacked out’ exterior still makes it off-putting to passing trade, but come February, it will be repainted in warmer colours to reflect the new, inclusive outlook. ‘We really are open to everyone now, seven nights a week, until as late as 5am,’ he explains. As he chats about Eagle London’s future, revealing he  turned down a buy-out from a supermarket chain, Mark’s enthusiasm is infectious. Party-starters Club Wotever threw a summer bash here featuring a vegan barbecue in the beer garden, and they run a kitschy film club every Wednesday. Although the venue still nods to its testosterone-fuelled heritage with nights like Men Inc., which attracts a muscle-loving crowd on Fridays, Mark has still had ‘some very vitriolic kick-back’ from longtime customers who think the Eagle name should be synonymous with sex. To this, he has the perfect answer: ‘We’re not offering sex any more – but look around. We’re definitely still sexy.’ 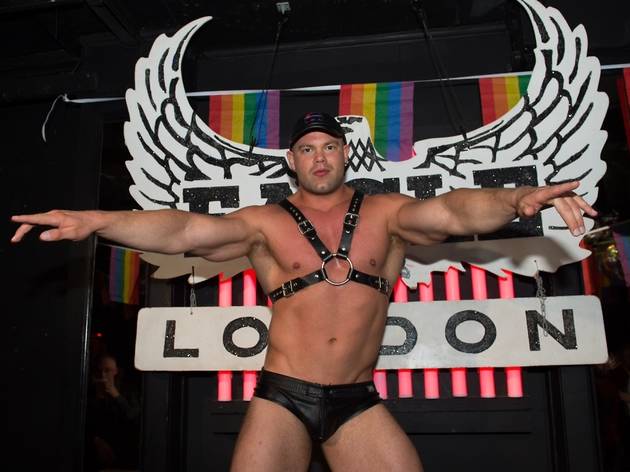 What was once a friendly local known as South Central, much loved by the bears brigade, is now a cruise club in the world-famous Eagle tradition. It's all change on Sundays for Horse Meat Disco, with its hip soundtrack and heady mix of skinny club kids, scally lads and bears.