Welcome to the future of renting

New tech and ambitious London-born start-ups, fuelled by our changing housing needs, are set to reshape flat-hunting in the capital

You know the drill: that scrabble to secure a room in a slightly mouldy flat, where you hope your prospective flatmates don’t have a penchant for doom metal, keep exotic pets or have an extremely high tolerance of dirt.

Renting is one of the great inevitabilities of life in our heaving metropolis. But advances in tech, ambitious London-based start-ups and changes in consumer demand are altering the process of renting to such an extent that it could be entirely different in ten years’ time. Here are just some of the changes in motion which are set to shift the way we live.

‘I think we will see change at every single point in the process, particularly as the use of artificial intelligence becomes more widespread,’ says Alex Sullivan, an entrepreneur who has founded Ems, a property-finding app.

In the future, virtual estate agents will use more intelligent search functions to show renters options that they might not have considered. Perhaps you’ve started your search in Brixton, because you like the area, its bars, restaurants, entertainment options and general vibe, and it’s on the Victoria line? Property search engines of the future will show you houses in, say, Walthamstow too. Essentially, it will know what you want before you do.

Sounds futuristic? It’s not. ‘Netflix and Spotify can make suggestions about what I want to watch or listen to, Instagram uses an algorithm to show me the things I’m most interested in. It’s quite subtle but it makes a massive difference – it helps me get to what I want, even if I didn’t know that I wanted it,’ Sullivan explains.

Once you’ve scrolled through the pictures and decided a place is worth a visit, you’ll be able to set up an appointment with the agent managing the property in seconds.

The app that makes it easier to view properties

Start-up Inadash wants to make it possible for users of its app to see when estate agents are at properties, or to book viewing appointments at the touch of a button – so no more standing on a wet corner in Peckham waiting for the agent to show up, and no need to make a mad dash out of the office at lunchtime. It is so much easier to fit appointments around your life.

Landlords are also going to have to up their game as time-poor tenants become more demanding. When it comes to renting in the future, large blocks professionally managed
by investors – rather than individual homes rented out by private landlords – is the way
the market is going.

Even now, prospective tenants have higher standards than they once had, as larger developments offer added luxuries to renters. ‘People are coming out of well-run, purpose-built student accommodation and demanding more from the rental properties they move in to,’ explains Lawrence Bowles, a researcher at estate agent Savills.

‘As bigger investors have come into the market, it has become more professional. Landlords are going to have to think more about the services they are offering: things like putting on events or having a gym on site will become standard in larger blocks.’

At the Rehearsal Rooms development in Acton, renters are offered top-notch interior design, social entertainment spaces, a barbecue terrace and rooftop allotments with views across London. It’s a far cry from the flats your parents might have rented. 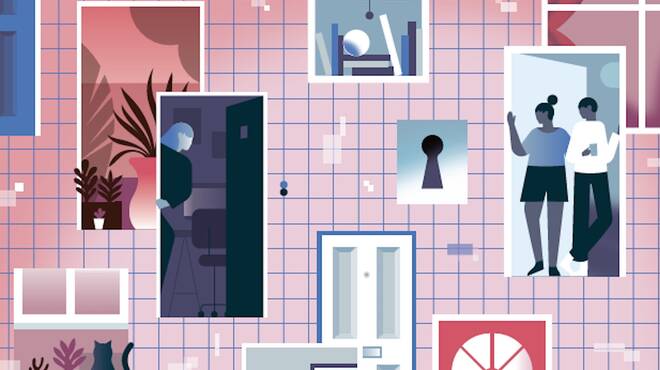 Developers are also beginning to offer total packages to renters to help today’s busy professionals. At the One Eighty scheme on Stratford High Street, tenants’ wifi and television package is organised as standard and there is a chiller room for storing online grocery shopping that arrives when you’re at work.

Co-living schemes, where residents have a small amount of private space but a large communal area, will also become more popular, Bowles predicts.

There are already a number of these on the market. Lyvly, a smaller-scale London-based start-up, requires prospective tenants to apply to live in its London properties via a sort of interview process with people who are already residents. Once you’re in, your rent covers ‘essentials’ including Netflix, cleaning and household necessities such as toilet roll. It manages flats and homes in existing housing stock (rather than new-builds) across Zones 1, 2 and 3.

Meanwhile, US giant WeWork will open its first UK WeLive residential building in Shoreditch next year. If its current flats in the US are anything to go by, residents will get perks such as in-house yoga studios, high-spec sound systems and maximum flexibility with a month-by-month rental contract.

Sadly, it doesn’t look like renting is going to get much cheaper in the immediate future, as supply fails to keep up with demand. However, there will be options. ‘The market needs a range of different types of properties – we’ll also find landlords just offering the basics for a lower price,’ Bowles says.

Better communication between neighbours and landlords

The good news is that new technology means the days of struggling to get your landlord to fix your boiler could be over. Andy Couroussopoulos launched his app Elumium after becoming frustrated that he never spoke to his neighbours or the company running his block.

‘It occurred to me how difficult it was to communicate to residents living in the same development as you, or even to connect to the management company,’ he says. ‘We use Facebook and WhatsApp to talk to friends and family, Slack to have conversations among colleagues – why wouldn’t we have a platform to talk to our neighbours, our landlord?’

Elumium allows participants to send messages via the app; residents can even use it to pay bills or rent via Apple Pay. It has so far been rolled out to 286 flats, but having just signed a deal with messaging app Viber, Couroussopoulos hopes it will soon be working across the city.

Even with all these technological advances, there’s no guarantee that you won’t still be sharing a flat with Graham the toilet-destroyer and his drum kit, but it’s a start.