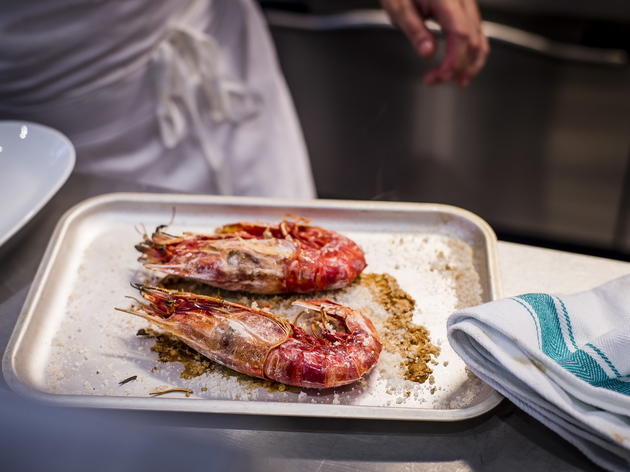 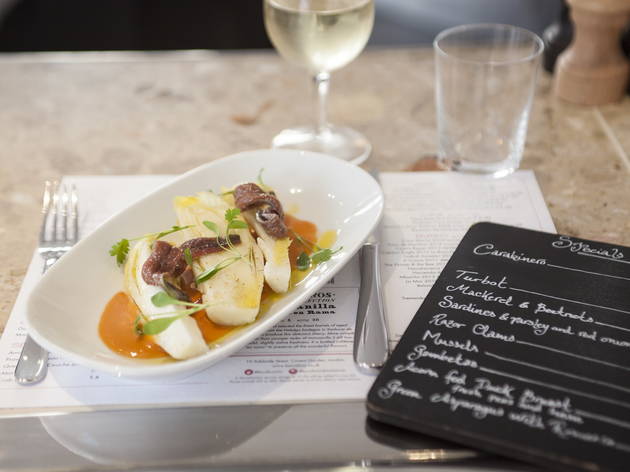 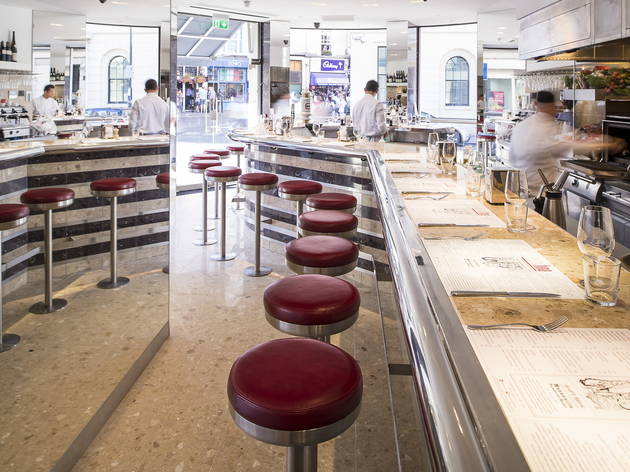 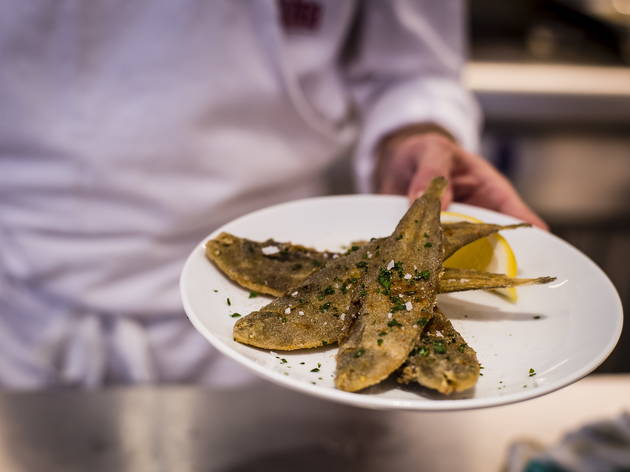 The Covent Garden branch of this Spanish tapas-paradise, fantastic food but with a no-reservations policy that makes queuing almost inevitable.

Who’s to blame for the no-reservations trend, which leaves us queuing for an hour or more to get into a restaurant? Some might point the finger at places such as Polpo in Soho, or Meat Liquor in Marylebone. But the first restaurant that gave a mandatory wait with dinner was Barrafina in Soho, which opened in 2007. And that hour-long queue for proper Spanish tapas is still there. So is this second branch worth the seven-year wait?

Taking no chances, we arrived just before the 5pm opening time and were the first customers seated, allowing us to watch the other tables fill up over the next hour. Much like the original Barrafina, it’s a simple room, but beautifully done: a long marble countertop, tall bar stools, plate glass windows letting in lots of light, and smiling Spanish staff in crisp white and maroon uniforms.

Barrafina’s menu is studded with Mallorcan and Catalan tapas dishes. Ortiguillas are a type of sea anemone eaten around the Balearic Islands. There, they’re marinated in vinegar, coated in a tempura-like batter and fried. Here they’re served in a paper cone, a crunchy seaside snack with soft centres, like fried oysters.

Escalavida con pan de coca combines a firm Mallorcan bread base (the ‘pan de coca’ bit, like a flatter, chewy ciabatta) with a topping of chargrilled aubergine, peppers, onion and garlic, the smoke from the grill permeating the vegetables. The grill is still a core part of the Barrafina formula, for example in pintxos morunos, little pork kebabs which were tender and very moist.

These little snacks are tempting and delightful, but watch out if you’re properly hungry, as the bill adds up fast. A solitary courgette flower, stuffed with soft white cheese and drizzled with honey, was a seasonal treat and winning combination of savoury and sweet, but is no bargain at £7.80.  Dessert of flan (crème caramel) came in an eggcup-sized portion for £6.50, albeit served with a squirt of nut-flavoured whipped cream. But despite the fancy restaurant prices, you need to remember that Barrafina isn’t a ‘proper’ restaurant; it’s a modern Spanish tapas bar, with a list of sherries, cavas and other wines by the glass that are as much of a draw as the food, and perfect for experimenting with as you nibble.

As we left  after a very light meal – it was only 6.15pm – the standing queue was already starting to form, the charming staff coping with the onslaught admirably. Just don’t say we didn’t warn you.