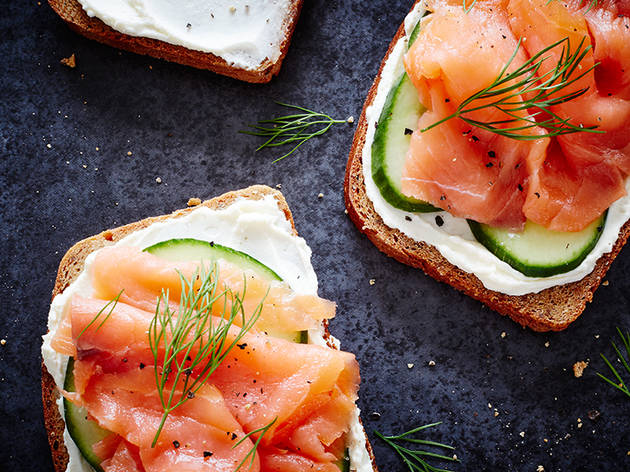 Beyond Bread may have an absence of gluten, but it is a rousing success. I visited on a weekday lunchtime, when the Ole & Steen style, grey brick minimalist interiors were half full with ladies either on laptops or manhandling babies, bossa nova music leaking from the speakers. It was relaxing, mildly hip and very Islington 2018.

The lunch fare here spans sandwiches (on various breads), quiche and cakes (plus scones and a few cookies). Overwhelmingly, the bread was excellent. If I hadn’t known it was all gluten free I’d never have guessed. The pumpernickel used for a ham, cheese and mustard toast was dense, mildly herbaceous and altogether better than the mustard-light insides.

A chicken caesar ciabatta had an excellent crust and a chewiness rarely gained without gluten, but the filling itself was underwhelming – partly as they’d used a ‘ricotta dressing’, which is caesar sacrilege. See again a ham and leek quiche (marvellous, buttery, brittle pastry; the filling little more than eggy ballast) and a teeny goat’s cheese pizza, which needed a stronger cheese but had a killer doughy crust that was better than many lauded London pizza joints.

A double-chocolate cookie was exemplary; a slice of honey cake a picture, but its ever-so-slightly dry sponge and anemic frosting was a weak link. Still, I was expecting worse. Beyond Bread might not sway the committed sourdough brigade, but it sure as hell fights a good fight.

Now closed at this location.

My fave little place for cake! I first tried the red velvet and hated it. I thought let me give it a second chance and ahhh i am so glad i did. We usually have our team meetings here, and its any excuse for me to either get the chocolate cake or their most delicious carrot cake!!! And i kid you not, I love their carrot cake so much, I go every week and purchase a slice! That lime frosting on top brings it all together, and the sponge is so soft and moist, goes perfectly well with a hot cuppa chai!