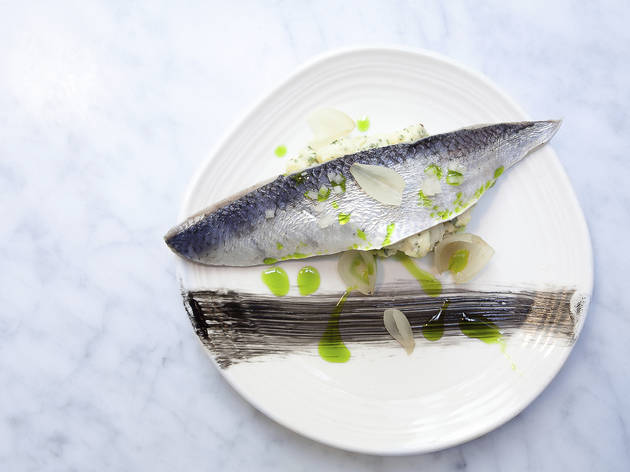 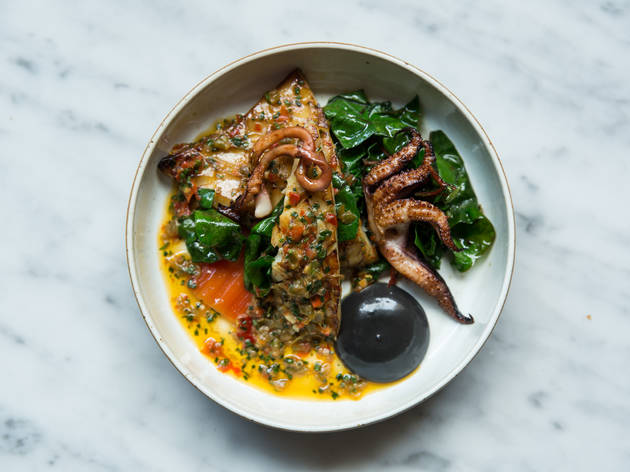 A tiny seafood restaurant on a Soho side street.

Right, let’s get the maritime metaphors off the deck shall we? Bonnie Gull is a super Seafood Shack (their tag) on Soho’s Bateman Street, but they’ve had a rough voyage getting here. Their first branch brought sunny seaside vibes to a box of a room in Fitzrovia in 2012 (and still does very well), but the second was a damp squib. Opening to a few salty reviews, it ebbed onto and quickly flowed off the foodie straits of Exmouth Market with nary a toot of a captain’s horn. Right, I’m done.

It’s cockle-warming, then, that this latest spot is such a success. It’s a classy little space, the emphasis on ‘little’. There’s a counter bar in the front, a locker-sized bolthole of a table area out back. That’s it. Where the Fitz branch has a tatty nautical aesthetic, this is classier: think swathes of marble, steel-legged stools and modish brass light fittings.

Everything I tried from the small-plates-heavy menu was unshowy, fastidiously fresh and ding-ding delicious. Grilled monkfish cheek and duck hearts – skewered on rosemary sprigs – were a killer pairing of sea and shore, the ’nduja butter a wildly punchy dip. A chunk of mackerel was equally fab, the bready, tomatoey pile of panzanella underneath a zingy foil to the salty flavours elsewhere; while the anchovy mayo that came with a side of tempura kale was the taste of rockpools distilled in emulsified egg and oil. That’s a compliment.

Best of all? A blinding dish of grilled Brixham brill with wild garlic velouté and sea herbs – a gorgeous combo of perfect white flesh, minerally samphire and unmistakable allium hum. An explicit note: there’s only one non-fish dish on the menu (plus a few standard sides), so if you’re not into the wet stuff, you’re better off elsewhere.

Service was almost laughably affable – we were given a round of free cocktails for slow service that we hadn’t acknowledged (or even noticed). Close your eyes and smell the sea air – this Bonnie Gull’s overwhelmingly a triumph.