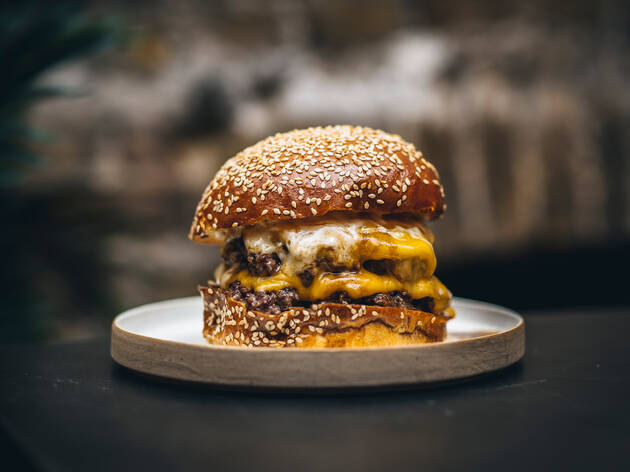 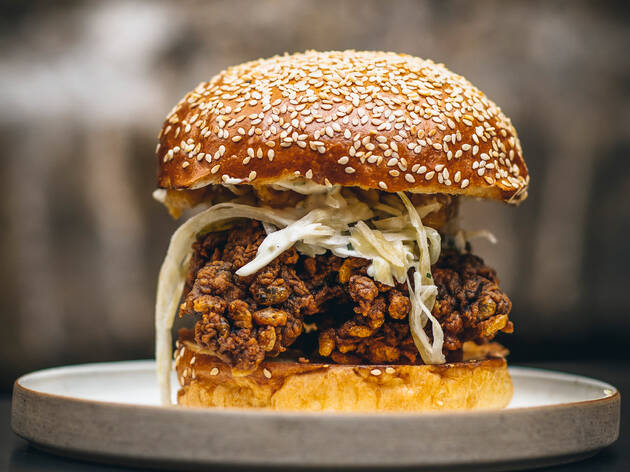 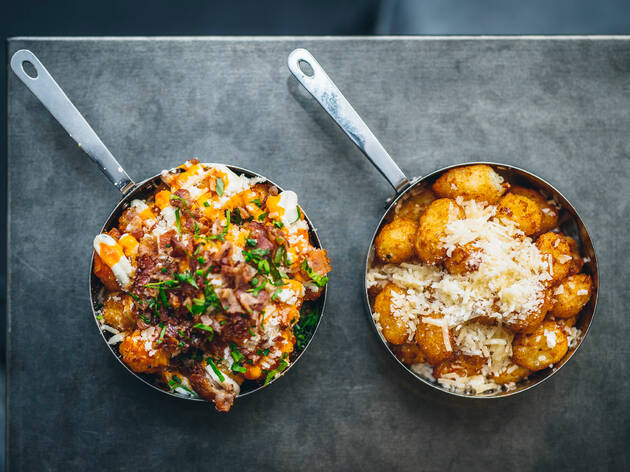 The first permanent eatery from the street food supremos.

Before we get to the ‘beyond’, let’s talk about the burger. This Shoreditch restaurant has six kinds, half of which have a signature dry-aged beef patty as their starting point. And with good reason: it’s superb. Officially cooked medium, it arrived juicy and just blushing on the inside, like a teenager receiving their first compliment. You can ‘double up’ and get two, but I wouldn’t bother: it’s already a decent size and had stacks of flavour, with a faintly charred note. It comes in a soft-but-sturdy sesame brioche bun with just a handful of choice ingredients: everything you want from a burger (cheese, sauce, maybe one other key item) and absolutely nothing you don’t. We couldn’t fault our Bacon Butter Burger, with its crisp pancetta, molten American cheese and burnt butter mayo. It was gloriously sloppy.

Now, on to the ‘beyond’. Go hungry (and I do mean starving), so you can load up on other delights, like the chicken bites: addictively good micro-nuggets with peppery, Southern-fried vibes and a slight lemony edge, plus a tangy mayo-based ‘secret sauce’ for dipping. Or the lamb croquettes: dark golden and dense, with crunchy breadcrumbed outers and moist, meaty middles. And don’t even get me started on the ‘dirty tots’.

But beware the bottom half of the burger menu. That is, the non-beef variants. We took the chicken and fish for a whirl, and the results were the same: good quality ingredients, sure, carefully cooked, yes, but either under-seasoned or under-condimented (not a word, but you know what I mean). This is easy to fix, but it was a pity.

Still, B&B has plenty going for it. The soundtrack of dancefloor remixes may have been a bit hectic for an early weeknight bite – especially for a small restaurant that wasn’t quite full – but it otherwise plays the part of urban hipster diner beautifully, with cosy booths and comfy banquettes against exposed bricks (obvs), shades of greige and thoughtful lighting. But really, what elevates B&B – the first permanent spot for the street food supremos – to something beyond a burger bar, is the clued-up, enthusiastic, welcoming service. Superstars, the lot of them.