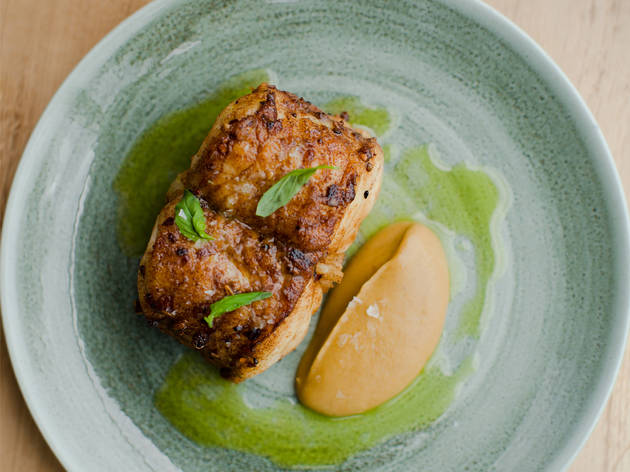 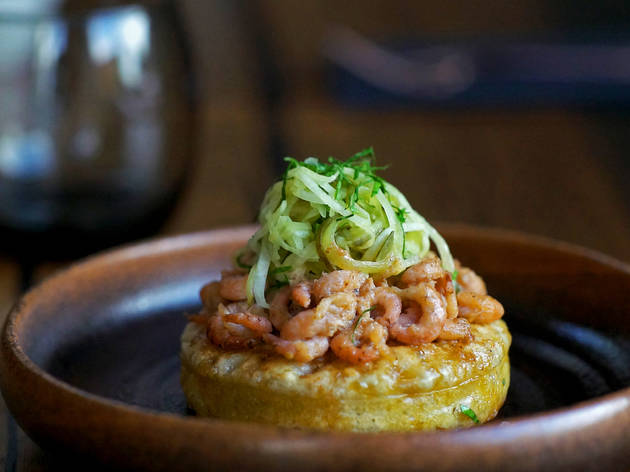 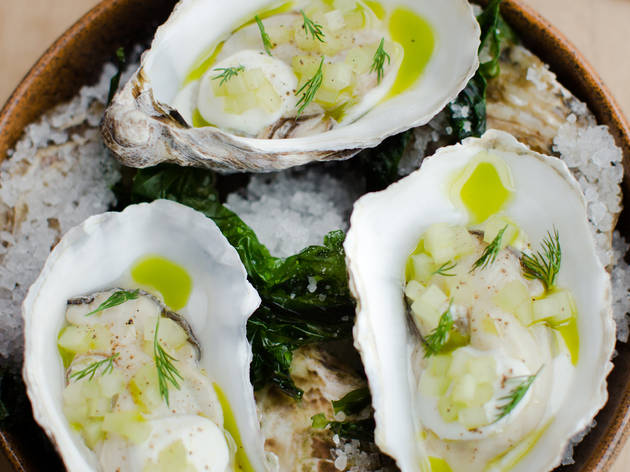 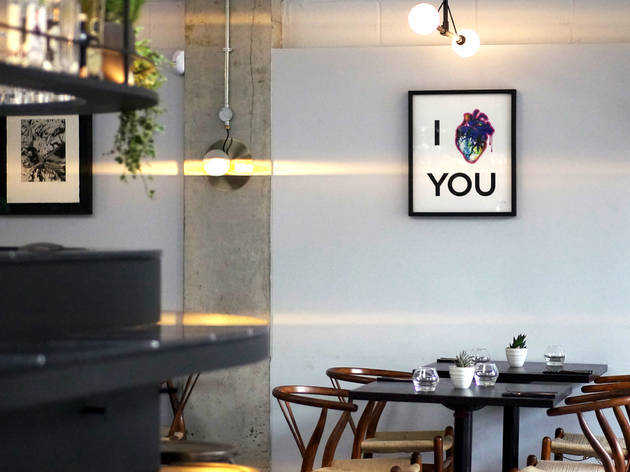 A slick seafood restaurant in Hackney.

Hackney. Haute cuisine. Not two words (okay fine, three) that you see together very often. Which is what makes Cornerstone all the more interesting. This is a large, ruggedly handsome restaurant, all concrete floors and designer cutlery, where the food – with a special emphasis on seafood – is meticulous and restrained.

The raw fish in particular was dazzling. Like a pair of pickled oysters. If you think of oysters as essentially being briny slugs, I urge you to try one of these. The soft, squidginess of the unsuspecting mollusc was thrown into sharp relief by a surrounding pool of pickle juice, heavily laced with dill oil. Each one was then anointed with a blob of mild horseradish crème fraiche, minuscule cubes of diced celery and sprigs of dill so tiny a fairy could wave them around. At its base, the liquid was vivid green, the colour of the elixir Elphaba’s mum drinks in ‘Wicked’. It was, indeed, magical.

Then strips of silvery, meaty strips of bream, the raw shimmering fish lifted by tendrils of samphire, blobs of herby mayo, fragrant tomatoes and a simple squeeze of lemon. But you can see thoughtfulness in the warmer stuff, too. Like a beautiful piece of brill, again in a deep pool of liquid, this time a comforting chicken gravy, laced with wine, chervil and lashings of butter and double cream. By rights, a sauce this obscenely decadent shouldn’t work with a piece of fish so delicate, but it did. A final note: the millefeuille is to die for. When you consider who’s behind all this, it’s no surprise. If you’re a chef groupie, you’ll know that pan-shaker and owner Tom Brown is a Cornish boy who trained under the acclaimed Nathan Outlaw (a Cornish seafood maestro who currently holds two Michelin stars at his eponymous Port Isaac restaurant). Outlaw, I think, would be proud. On the night of my visit, Brown was calmly running the open kitchen, which is smack-bang in the middle of the room. Wherever you sit, you’ll feel like part of the action.

True, there were a couple of dishes that didn’t quite gel: curls of squid alternately overwhelmed by both black pud and citrus fruit; and a pavlova that was brutally oversweet. But overall, this is quiet finesse, in a genuinely buzzy, attractive space, with rocking music and friendly young staff who in spite of their casual clothes (long aprons over T-shirts, jeans and Converse), understand how to pace a meal and what’s in the dishes they’re serving. So, welcome, Cornerstone: east London’s newest destination spot.