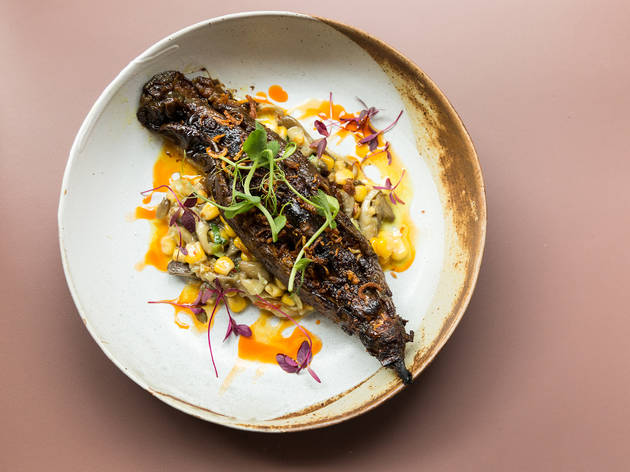 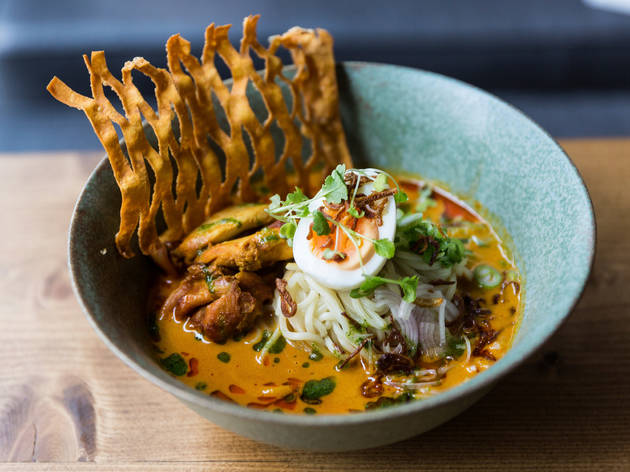 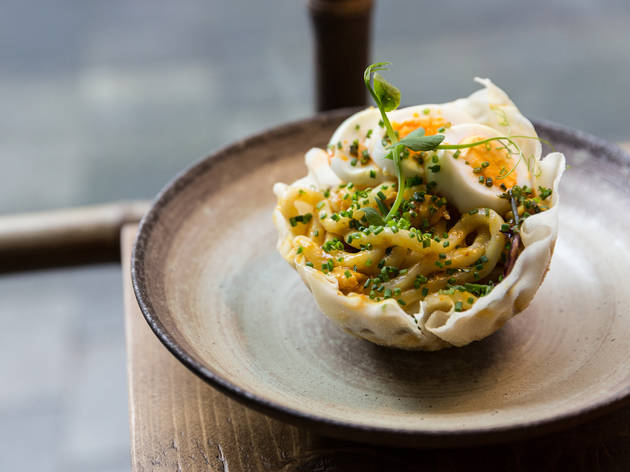 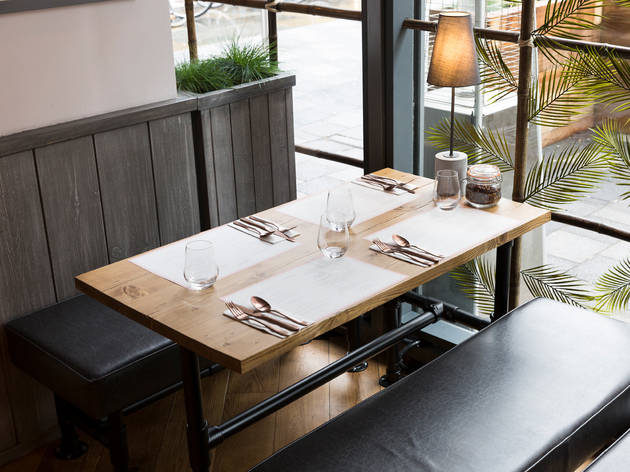 The Shoreditch reboot of a popular Burmese restaurant originally in Hackney.

On looks alone, Lahpet’s a star. The popular Hackney Burmese has transferred from an awkward, pokey space to a large, airy site on the eastern fringes of Shoreditch. It’s achingly stylish. Handsome woods are accented by soft-toned metals; paintwork is in muted shades of grey; upholstery is patterned but chic. The huge windows – like those of the iconic Tea Building down the road – are split into square panes. Against the glass, diffusing the light as it comes in, are dark, swollen stems of bamboo, lashed together with rope, with tooth-edged palm fronds at neat little intervals. It’s nothing like the eateries of Mandalay, where restaurants are heavy-wooded and hotelly, while street food is eaten outside on plastic furniture. Doesn’t matter. The food here’s great. It can do what it likes.

Burmese flavours are the cousins of Thai and Indian: one moment all coconut and fragrant herbs, the next all heavy pulses and warm spicing. Everything I ate was excellent, but a few dishes elbowed their way to the front for attention. Take the paratha. Buttery, charred-edged and fat with a filling of spiced yellow peas, it had the carb-on-carb comfort of a south Indian masala dosa.

The signature Lahpet salad, with bitter curls of tea leaves and tiny dried shrimp, was good, but know this: the fishcake salad was better. Strips of fragrant, chewy protein sat in a spidery tangle of sweet caramelised onion, crisp cabbage, crunchy split peas, plus a fragrant, fiery dressing. Then there was the ginger ‘salad’, actually a duo of baby gem lettuce wraps, each loaded with a nest of nuts and ginger, plus cherry tomatoes, shallots, chilli and coriander. It was a kaleidoscope of crunch, zing and waves of heat.

Another signature, of sorts, is the hake. A chunky, succulent fillet, it came balanced on a dense, moreish potato rosti and under a blanket of rich, tangy, fiery masala sauce. And don’t leave out the coconut noodles with chicken. Somewhere between a soupy red Thai curry and a laksa, it had tender meat, soft (but not too soft) noodles and half a boiled egg on top. It was absolutely enormous, too.

There were a few tiny niggles: the drone of generic post-clubbing music, thankfully drowned out by laughter and chatter. A side of morning glory with mushrooms that was oversalted. A dessert of avocado mousse too gelatinous and cloying.

But Lahpet is buzzy, the service is clued-up and friendly and it’s terrific value. So grab five friends, request one of the booths, and order as much as you possibly can.