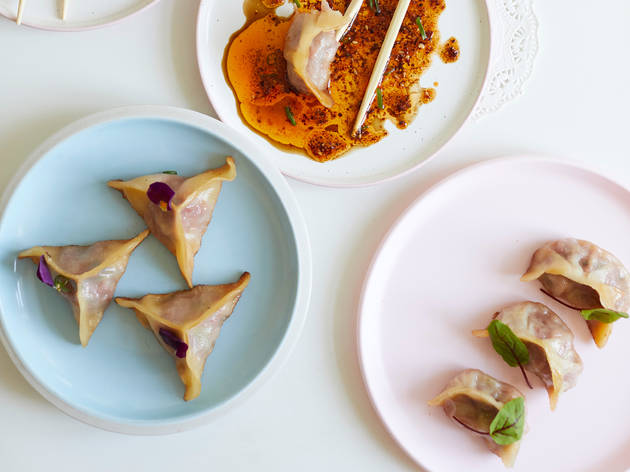 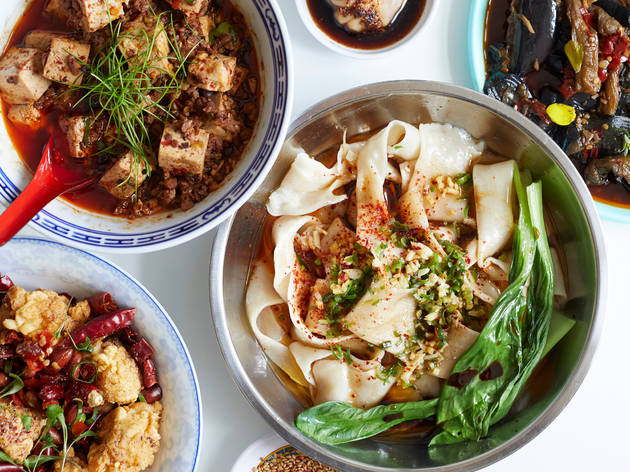 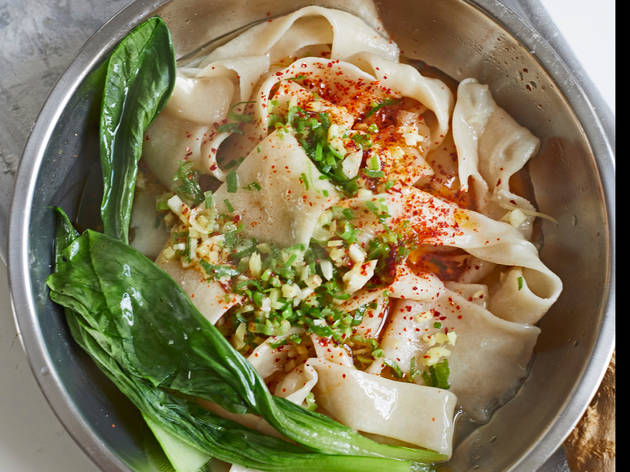 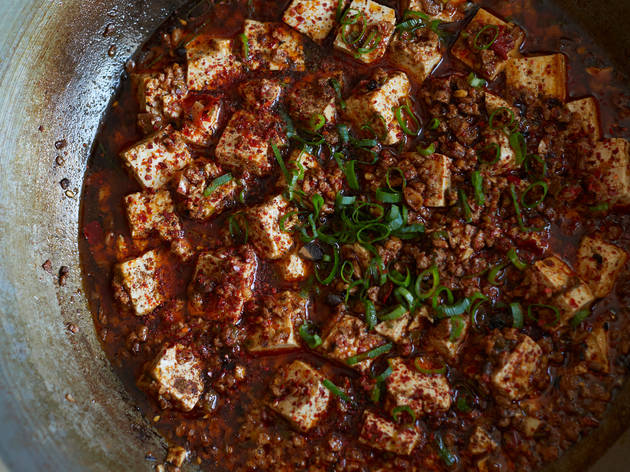 Got a diehard, card-carrying carnivore in your life? The kind who likes vegans, but couldn’t eat a whole one? This is where you should take them. Quietly sit them down at the communal table, order pretty much one of everything off the small, laminated menu and say sweet FA about the place’s USP. Which is not that all the street food is terrific value, or that it’s Sichuan-leaning and beautifully spiced, but that every dish happens to have originally come from a plant.

They’ll never suspect. Sure, the space is small – I’ve been in bigger minicab offices – and humble, but unlike many vegan gaffs, it’s refreshingly free of propaganda. Instead, it just feels like a typically cheery hipster hangout, with retro tunes blaring out of the speakers and ice cream parlour pastels on the walls. The only seats are at a single sunshine-yellow table or at a wall counter, with your bottom on a shiny red Tolix stool. Mao Chow doesn’t take cards and the loo was out of order. (‘We use the one at The Dolphin, a few doors down – they’re very friendly.’ This is definitely true: the bar staff at the bar called me ‘darlin’’ and tried to get me to stay for drinks.) It’s as laidback as a sunlounger on a half-price holiday .

As for the food, it’s terrific. The smacked cucumber, with its crunch of sesame seeds and sharp lick of vinegar against all the oil and heat, was among the best I’ve had in London. Dry-fried green beans – another classic – combined the warm, low hum of roasted chilli with the mellow intensity of black bean and crunchy, earthy peanuts. Next-level good. Don’t miss the dan dan noodles, either: these had a sweetish tinge, and even a small bowlful managed to be deeply satisfying; the secret ingredient (we asked how it was made and they, of course, wouldn’t tell) was a topping of homemade Mao Chow vegan ‘mince’. Soft and moreish, it had the taste and texture of slow-cooked then flash-fried pork (which is exactly what it was standing in for). The whole thing was sloppy and delicious. I could eat it every day.

Also good were steamed dumplings, their chewy pastry filled with finely chopped mushrooms and more of that mystery mince, sitting over a puddle of chilli oil. And decidedly decent was an oyster mushroom bao. It was just the mapo tofu – the most obviously vegan dish of the bunch – that was on the ordinary too-too-wet side; only go for it if you’re an ardent tofu-fancier.

But here’s the thing. It’s never easy to get Chinese food in vegan form (plenty of restaurants will swear blind that a dish is vegan, then admit when pressed that there’s fish in the soy and oyster sauces, and beef in the gelatine). But to get Sichuan street food that’s memorable enough to please vegans and non-vegans in equal measure, with pay-packet-friendly prices, served up by jovial staff in a cute, fun space – well, that’s another thing entirely. Kudos to you, Mao Chow: you’ve only gone and re-written all the rules.