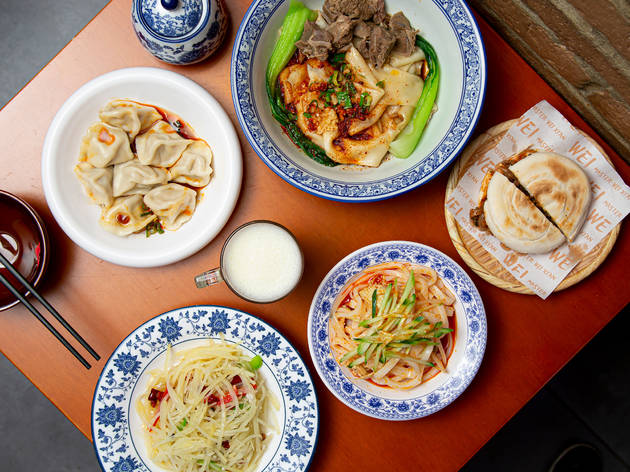 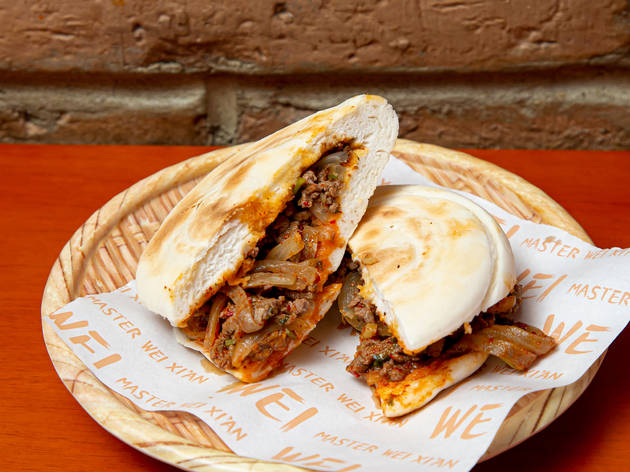 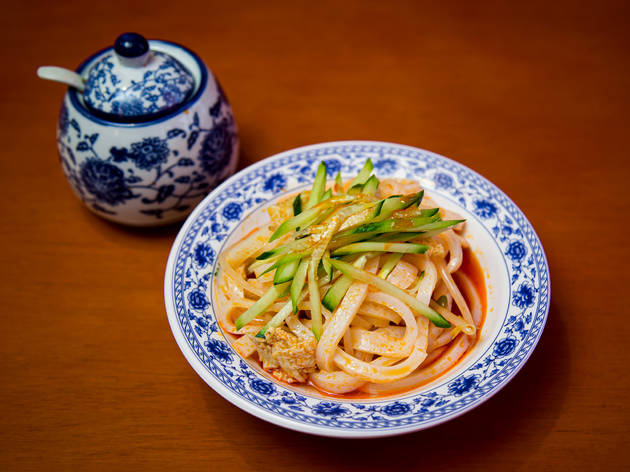 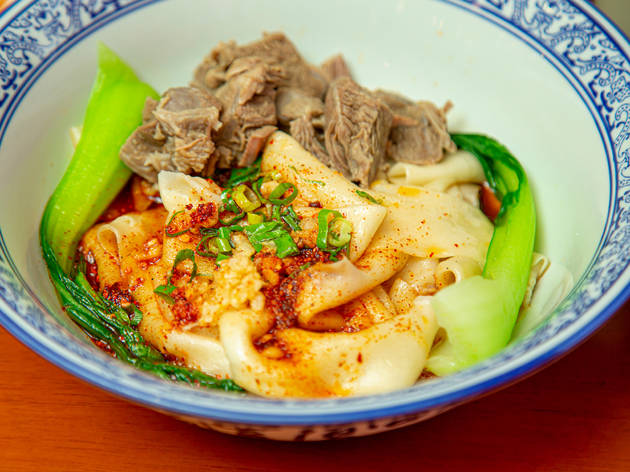 Walking down a cobbled alley in London is a little like chasing a rainbow: sometimes, if you’re really lucky, there’s a pot of gold at the end. Master Wei is precisely that treasure. It may not look especially swish – though it is bright and clean – but that’s missing the point. You’re in search of this: the food.

The menu focuses on dishes from the Shaanxi province of China, which is currently having a bit of a London moment, thanks to the popularity of its biang biang, or ‘wide belt’, noodles. If you don’t know what these are (let’s suppose you’ve been on a silent retreat for several years), the best place to start is to imagine something akin to pappardelle: the wide, ribbon-y kind. Now pimp that plate: making the noodles wider, thicker and longer, like something you might whip out to lash bits of your car together if your engine overheated. At Master Wei, they’ll come with a killer topping – chunks of tender beef or melting lamb, say, plus chilli sauce and pieces of pak choi – which they’ll mix in at the table. Whatever you choose, it’ll be singing with fire, garlic and oil, against the intensely satisfying chewiness of the noodles.

But truthfully, though the belt noodles are terrific, what made Master Wei that bit more special was how well it did the lesser-seen dishes. Like, for instance, the potato sliver salad. Don’t expect the Teutonic, dairy-laced kind: this was a crisp, glossy, peppery number. A bowl of matchstick-thin spud slivers – and I mean the really tiny ones, that would struggle to be useful in a power cut – they were still crunchy, like something lightly pickled. Layered into this bonfire of micro-twigs were heaps of visible szechuan peppercorns, the kind that make your tongue go numb, plus plenty of dried red chilli. The trick is not to eat any of these, but to let them do their job: to impart a gentle, fuzzy heat to the whole thing, without singeing your taste buds. Oily and garlicky, it had all been warmed to a degree or two above room temperature: despite its official salad status, it was strangely comforting.

But the absolute book-the-top-floor-of-the-hotel-for superstar dish of the night was a plate of Xi’an liangpi noodles. You can have these with or without chicken. Unless you’re ravenous, leave it out: it didn’t need it. For £7.90, you got an enormous bowl of cold hand-cut noodles, some in clumpy shapes, some more distinctly noodle-y. Then layers of texture and taste, from spongy tofu to fragrant sesame, from crisp beansprouts to juicy strips of cucumber, plus a sauce that had tang and heat and a little bit of vinegary acidity. I know that a bowl of cold noodles might sound more like punishment than prize, but just go with me on this.

As for the dining room, well, it’s fairly functional. There’s a long strip of what look like giant backlit slides, depicting the best of the Xi’an region, like you’d get in a retro tourist office. The tables are wipe-clean, the banquettes distinctly pleather. Walls are exposed brick (the ‘new build’ kind), the floor grey and tiled. It would be great for a cleaning ad: you could drop a vat of oil in this place and have it come up sparkling in no time. But whatever. Staff couldn’t have been more welcoming, the cooking was terrific and portions are huge, especially given the prices. So take yourself to Queen Square, look for the alley, and prepare to delight in its treasures.

Master Wei says
Welcome you make your order on Deliveroo and UberEATS! we are on Justeat now!