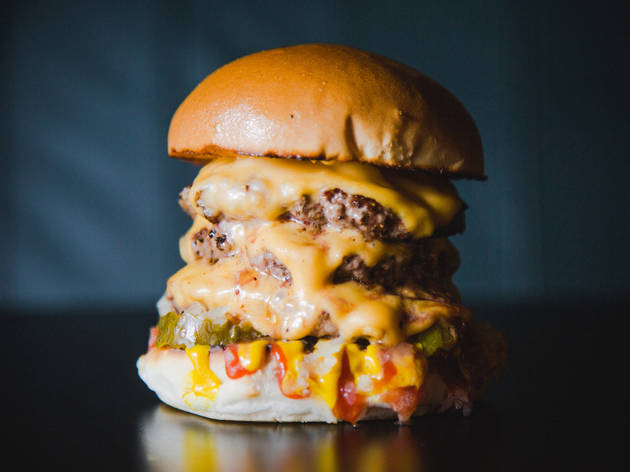 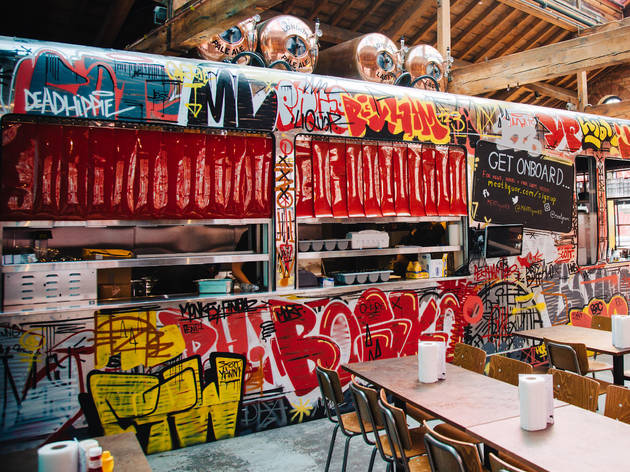 A branch of the burger restaurant in King’s Cross.

Meat Liquor has made its name in dirty, boozy, meaty dude food, so it’s a surprise that the menu now features a vegan burger. The first branch, in Marylebone, looked like a heavily graffitied nightclub with a no-suits rule and a cult following. Now the brand has a cluster of London branches – a grungy little empire – but they’re rolling with the times. All without compromising the ML essentials, of course. The bar at this King’s Cross branch looks like a trailer, the ceiling is covered with skulls and there’s an upside-down McDonald’s sign above the loos (the ‘W’ in WC: geddit?). Of course, now that Meat Liquor is itself a chain, that sign seems less anti-establishment. As does the fact that you can ask for your burger ‘rabbit style’ (no bread). But the person who serves you that breadless burger will likely have loads of tattoos. It’s a fine balance.

And the meat? The signature Dead Hippie – two pink-middled French-mustard-fried patties smothered in a tart, trademarked burger sauce – was good, if unremarkable. More memorable, perhaps, was that vegan burger. Called the ‘burgaloo’, it was a fiery sweet potato, black bean and beetroot patty rolled and fried in panko breadcrumbs and topped off with sweet, thick pickles. Also insanely good, but this time veggie, were the creamy deep-fried mac and cheese balls. Top tip? Order the fiery, juicy buffalo chicken burger (that’s right, a chicken burger!). It’s the best thing on the menu.

Aggressively dry buffalo wings and a £6 Jägermeister ripple ice cream that came pre-made in a tub let the side down a bit – but a ‘filth pie’ made of Oreos, chocolate, marshmallow and desiccated coconut rescued everything. Oh, and one of the tattooed guys took the Jäger ice cream off the bill unbidden, with swoonworthy smoothness.

Wanna bag 50 percent off here? Check out our Table for Two Vegan-Friendly Box.