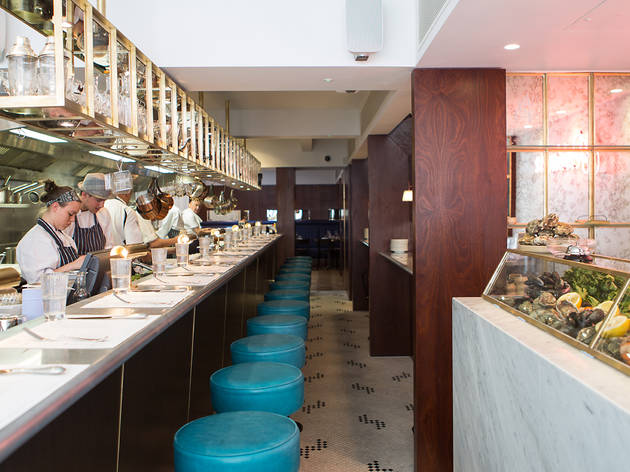 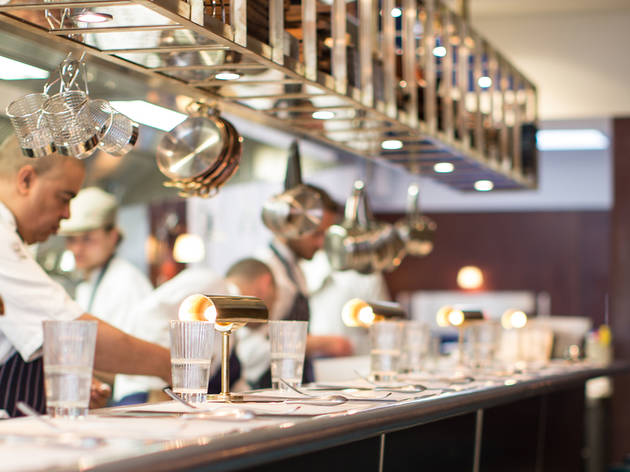 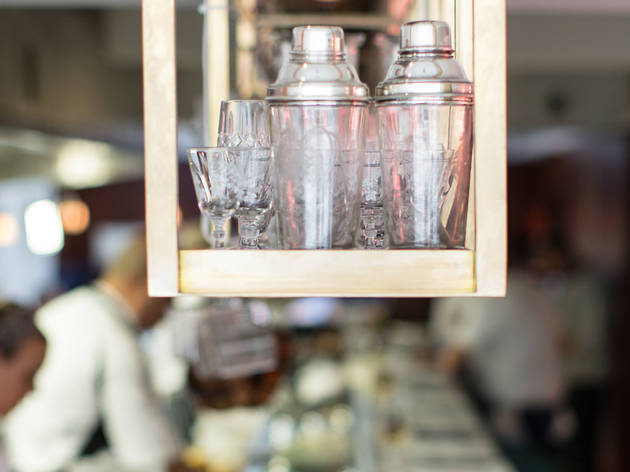 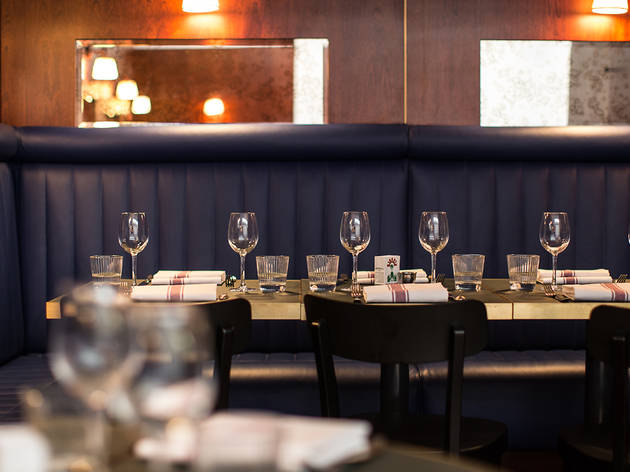 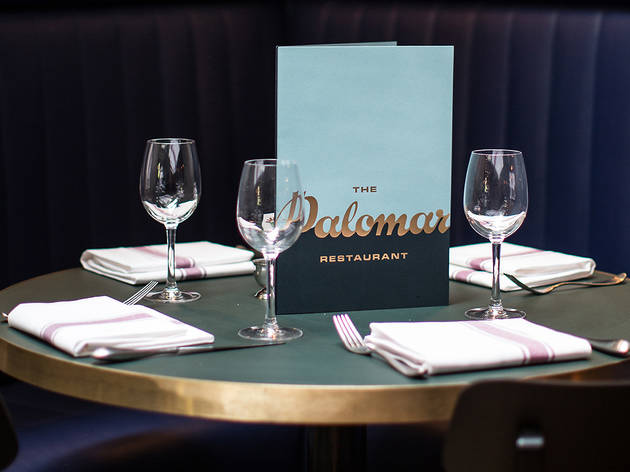 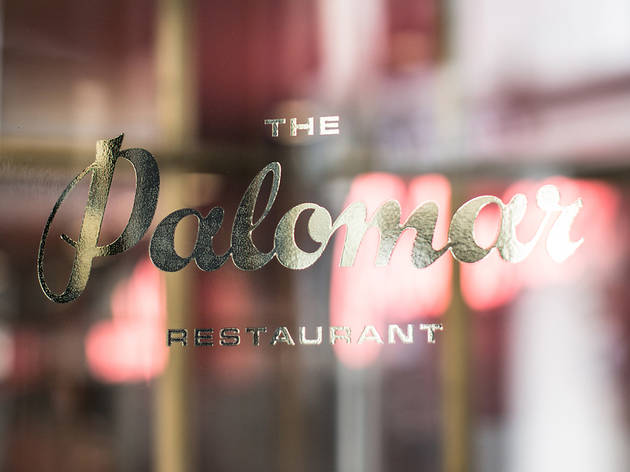 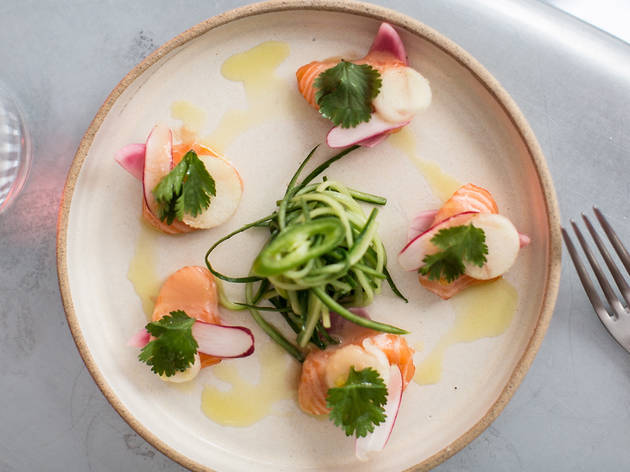 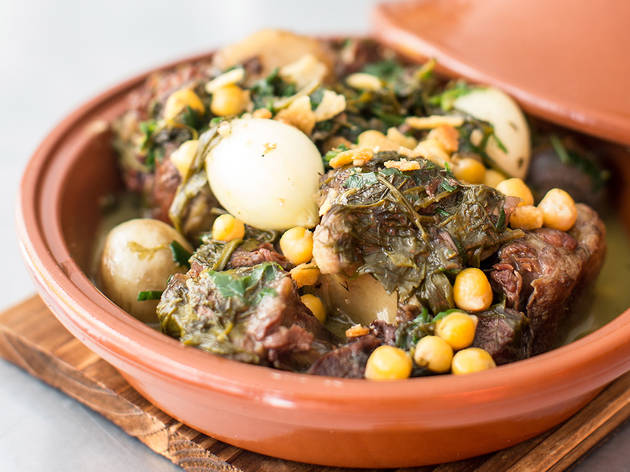 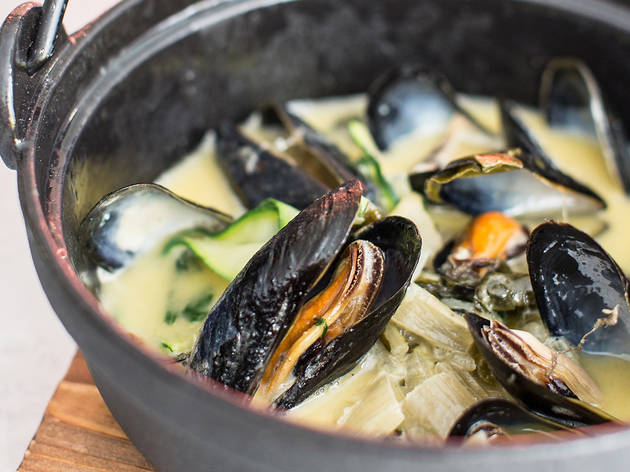 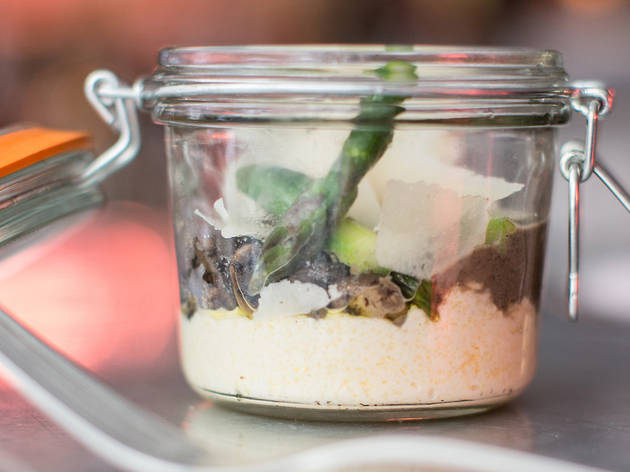 Fantastic modern-Israeli food, pulse-quickening dance music and a warm family atmosphere at the West End’s most unlikely bar-restaurant of the moment.

Pulse-quickening dance music, free-flowing drink, vibrantly flavoured dishes. These are commonplace enough in Israel’s fashionable restaurants, which are filled with beautiful people partying as if tomorrow may never come. London’s Jewish restaurants couldn’t be a bigger contrast. Many of them are still too worthy, too dull, or stuck in a kosher past that doesn’t innovate with dishes. But the London Jewish restaurant scene has just bucked up with the arrival of Palomar. Run by two Israeli-born nightclub entrepreneurs, it’s become the West End’s most unlikely bar-restaurant of the moment.

We were greeted like family as we arrived and were seated at the bar. These first-come, first-served counter seats have the best view in the house, as troupes of people squeezed past us along the narrow corridor of the bar, through to the leather-upholstered banquettes of the equally cosy restaurant at the back. Many shaloms are exchanged as new arrivals bump into acquaintances or friends. The convivial feel is helped along by the huge ratio of staff to customers, ensuring a glass never goes empty.

Our waitress talked us through every dish – the full restaurant menu’s served at the bar – with the smooth efficiency of an El Al air traffic controller. A ‘raw bar’ is also squeezed into the unfeasibly tiny entrance area, doling out the cold dishes. The menu’s not kosher: not with seafood such as a octopus tentacle, served Spanish tapa style with chickpeas, spinach, mallow leaves, yogurt and a kick of chilli. Dairy and meat also mix in this kitchen, for example a scoop of finely chopped beef with bulgur, tahini, pine nuts and herbs, a dish you might find anywhere in the Middle East – called kubania in Hebrew, kibbeh nayeh in Arabic.

Many of the dishes are recognisably Sephardic, that is, gathered from the Jewish diaspora when the family tree grew vigorously through North Africa, Iberia and further afield. The Yemeni-style bread, kubaneh, was our pick of the starters: a yeast bread baked in a tin, it’s tipped out still piping hot, to be torn by hand and eaten with rich tahini and tomato dips.

Tempting though it was to order the pork belly tagine for novelty value, we opted instead for the more orthodox Moroccan-style chermoula-stuffed sardines. The coriander-slathered oily fish, served with Moorish shards of fennel, orange segments, olives and almonds, was an appealing explosion of flavours and textures. Our favourite though was the dish called ‘shakshukit’ – no relation to the vegetarian dish of baked tomato and pepper dish called shakshuka, but a spicy mincemeat dish served in a swirl of tahini and yogurt, with freshly-baked round laffa bread: the tastes of the souk.

Palomar transported me straight back to the Tel Aviv party scene; now, it seems, the party’s come to London. Jew or Gentile doesn’t matter here, but as well as being prepared to explore modern Sephardic cooking, bring an appetite for fun.