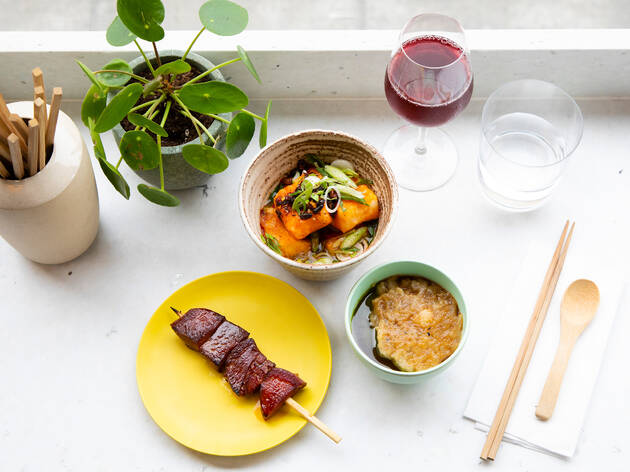 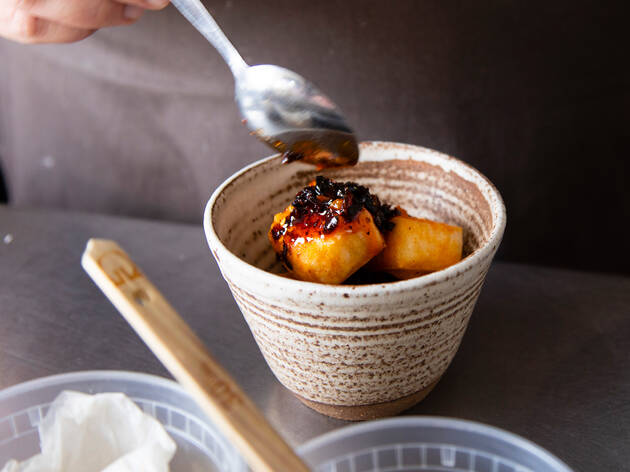 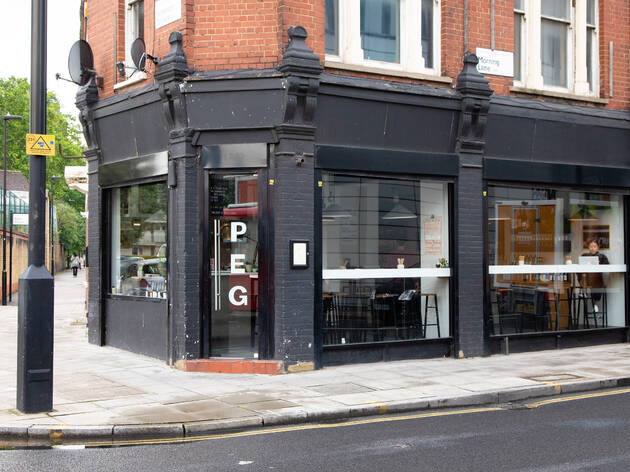 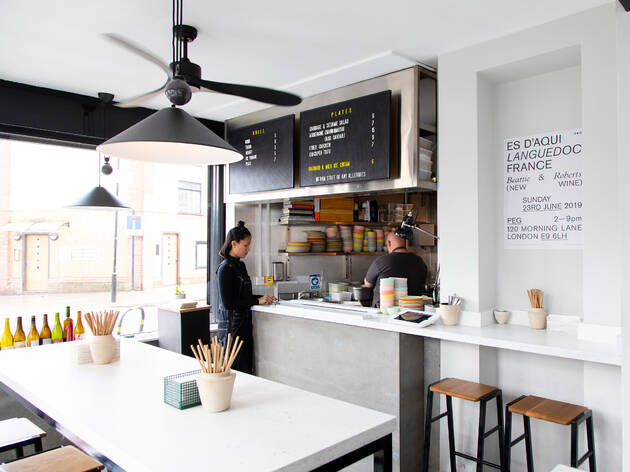 On the site once home to Legs, now stands Peg. I’m sure there’s a joke in there somewhere. But whether the name was meant in jest or not, this is a restaurant to be taken seriously. It’s from the same crew as the luminous Bright, but with food that’s less of an eclectic pick ’n’ mix. The focus, instead, is overtly on izakaya-style cooking (that is, small plates of Japanese drinking food) in an achingly hip but effortlessly friendly setting.

The menu is tiny: if you went in a four, you could easily eat your way through the lot. And that confidence is rewarded, as nearly every dish was terrific. The katsu sando – a signature Bright dish – once again saw breadcrumbed chicken snuggled between two slices of white bread with its crusts cut off. The bread was soft and fluffy, the meat juicy and salty: not unlike a Bernard Matthews turkey burger, but I honestly mean that in a good way. To cut through all that oof, there was a layer of grated white cabbage. Plus, to one side, some floppy coins of gently pickled Japanese radish.

In true izakaya style, there was a choice of grilled chicken body parts from the grill. Next to us, the diners were eating wings and thighs, but we went with chook hearts: tender pink-middled bites with just a hint of char. And no, in case you’re wondering, they’re not at all ‘offally’. Do try them: at only £3 a skewer, what have you got to lose?

Then there was a beautifully simple cabbage salad, the shiny white leaves jumbled together with frilly-edged mizuna (Japanese mustard greens), then showered in toasted white sesame seeds. Sweet, peppery and nutty, it gave some much-needed respite from all the meaty drinking food, and was brought at just the right moment, as if the staff had been having the same thought. Equally delicate was an asparagus and wild garlic chawanmushi: a veg-studded savoury egg custard the consistency of silken tofu steeped in a layer of subtle, allium-scented broth. This is the kind of dish to make you stop, then pause for a moment. Then, sigh.

Don’t miss the eel-topped rice cakes either. Imagine four squares of fried hash browns, but made with cooked rice instead of potato. Now mentally top them with a blob of crème fraiche, a slice of just-cooked cucumber, a chunk of smoked eel and a final square, this time of nori (dried seaweed). It was richness and light, softness and crunch, with guts and flavour to boot.

It was a huge shame, then, that a plate of fat white asparagus spears, though expertly cooked and served with a citrussy concoction of blood orange, chilli and soy, was ruined by an excess of salt. A one-off moment of heavy-handedness? We hope so.

It was quickly forgotten. This small restaurant is airy and relaxed. Those of you who remember Legs will find the outside unchanged – it’s still lots of glass – but the inside a little different. Gone is corner-kitchen-with-seats, in its place a small open kitchen. To sit at a counter you’ll need to go for the window (surely the best seats here) or sit facing a wall. Instead of the individual tables, there are now two big communal ones. Which means more seats. A good thing too: on our weekend visit, Peg was packed, with walk-ins being turned away.

Other secret weapons are the soundtrack, played off its own collection of vinyl on a record player in the corner, accessible pricing and switched-on, genial staff. It might be in a bit of a no-man’s land spot, but Peg is a place to get hung up on.