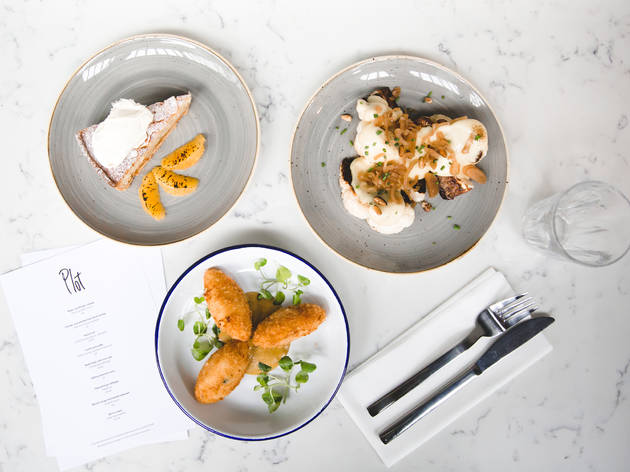 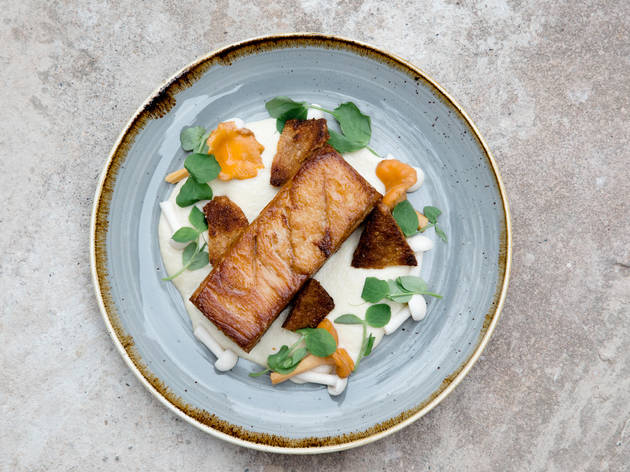 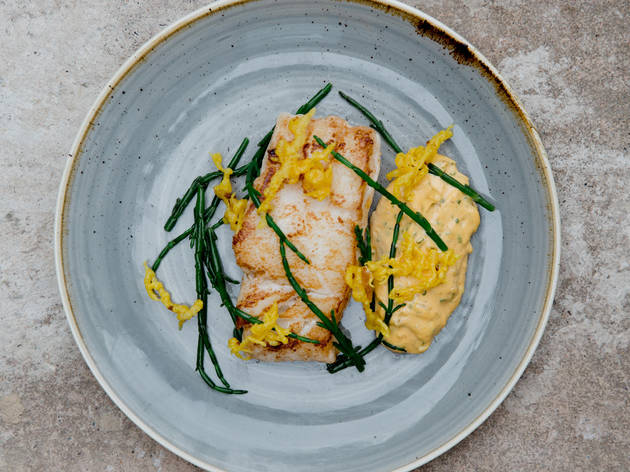 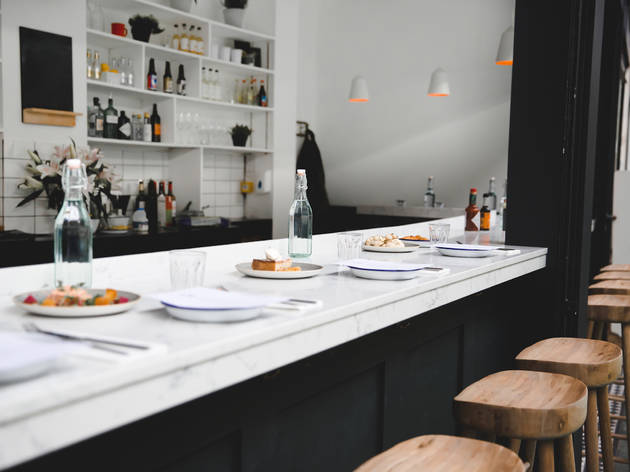 ‘Don’t forget your coat’, chirped a local pal, ‘it’s a bit of a wind tunnel in there’. We were talking about Plot, a charming newbie inside Tooting’s Broadway Market. I say inside, but it hasn’t got any walls: just a counter and two communal tables. So it’s sort of outside-inside, if you get my drift.

The compact menu (short enough to almost order one of everything, if you’re a glutton – hello!) is all about small plates. Of the modern Brit kind. It’s seasonal: course it is. And often local, too. But I loved them for not trying to trade off this picklist of trendster tropes. In fact, if you looked for beers and didn’t happen to know that 2Tone Lager was from By the Horns (a 20 minute walk away), or that the Calif-Oregon Amber Ale is the work of SW12’s Belleville brewery, you’d just think they were jolly nice brews and be none the wiser.

They do point out that walnuts come candied in Wandsworth honey, but hey, if you can’t big up your local nectar-gatherers then you really are a heartless bastard. These nutty numbers appear (with waxy goat’s cheese and sweet, earthy chunks of roasted beetroot, in case you’re wondering), as the first of a terrific procession of plates. Next up, the must-order oxtail croquettes. They’re not gamey in the slightest (if you’re generally frightened of things made from tails), but mild, meaty and moist. Four fatballs of wonder. Each with a crunchy, deep-fried coating that begged to be broken into.

Then there was the lamb. This could have been a shade rosier, if I’m being picky, but came with such a sit-up-and-pay-attention take on a salsa verde, made with new-in-season wild garlic, that it still left a lasting impression (and not because of allium breath). Last up, a dense, buttery, sweet bakewell tart, with a nicely salty edge, came anointed with a dollop of silk-and-sour crème fraîche and the pièce de résistance: a zesty, bittersweet blood orange marmalade. Too many puds are so basic, just a load of sugar and fat and not much else. This one had complexity and depth. Kudos.

But great restaurants aren’t just about the food. If they were, we’d all be sat at home in our pants, eating Deliveroo. They also need great service and ambiance to somehow stick in our minds. And that’s where Plot comes in. Not only is the fresh-faced, clued-up team cute enough to make me want to put them in my pocket, but Tooting’s Broadway Market is a lovably dodgy, retro-throwback of a building, all knock-off leather jackets and bucket-shop flights. At night, sat under the high market ceilings, with a nip in the air, the fluorescents off and strings of colourful fairy lights blink-blinking above you, it’s almost like sitting under an urban, starlit sky. So wrap up warm and embrace the magic.