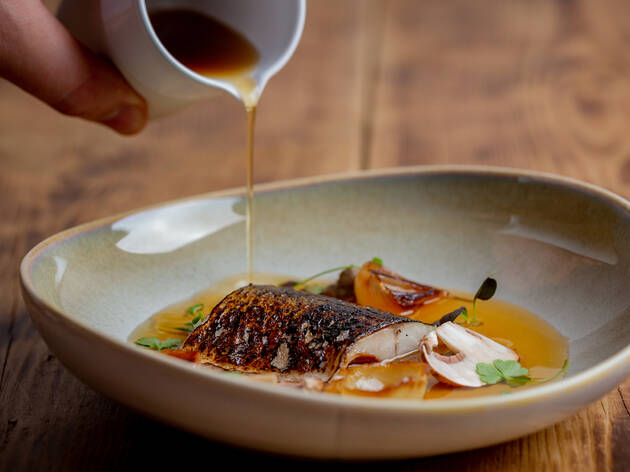 A shipping container restaurant in Pop Brixton, specialising in seafood.

Tiny but bursting with flavour. That’s roe. Or fish eggs, to the rest of us. Which makes it a fitting name for this dinky little shipping container restaurant, up one of the staircases at Pop Brixton. There are just two communal wooden tables, while the teensy kitchen at the end deals in – you guessed it – seafood.

It’s a compact menu, too, but with enough dishes that, unless you’ve come in a group, you’ll have to make some choices. So take my advice: go large on the small plates. I mean it, spread your net wide and reel ’em all in. There were too many treasures to cover in full, but let’s give it a try. You’ll kick off with squid ink and Guinness soda bread, the colour of obsidian, the weight of something you might throw at someone who’s just loafed off with your iPhone charger. You chew it slowly, ponderously, having perhaps slathered it in some of the seaweed-speckled butter. You could also upgrade your topping to one of mackerel pâté, whipped cod’s roe or, my favourite, a dish of plump pickled mussels, their vinegary notes cut through with that spiced sausage of princes, ’nduja.

Then there were squid ‘noodles’, the glistening cephalopods having been cut into pale, shimmering ribbons. Slippery with sesame oil and the occasional sharp, fiery hit of fermented hot sauce, they sat over a handful of verdant and crunchy pak choi leaves, in a wet, nest-like little heap. This, on reflection, was my favourite dish of the night.

Though there were other delights. Like a moreish trio of squid ink arancini over a puddle of foamy, savoury pecorino sauce. Or a pair of blackened but buttery quarters of sweetheart cabbage. And finally, an elegant pud of silken, delicately perfumed earl grey panna cotta. Of course, if you’re more of a traditionalist, you may insist on ordering one of the large plates: fat fillets of fish over lentils and such. This is all perfectly pleasant dinner party fodder, just not as special as the small stuff. And speaking of special, a word about the staff: they’re just lovely. Maybe it’s because it’s such an intimate, crammed-in space. You’re forced to be friendly. Or maybe it’s the flattering lighting and feel-good retro soundtrack (they were playing Pulp when I walked in). Roe may be tiny, but it’s shiny – and punches well above its weight.