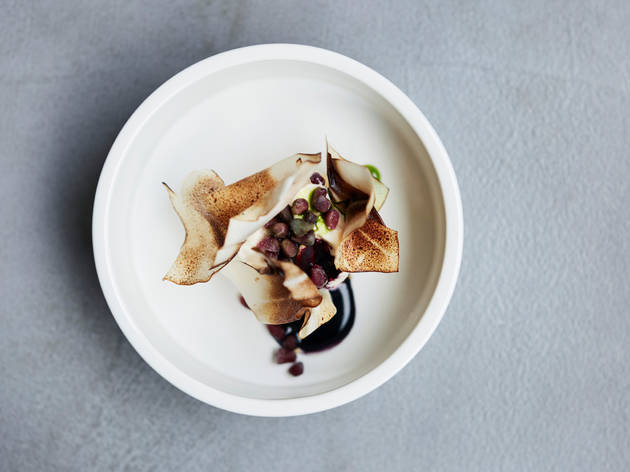 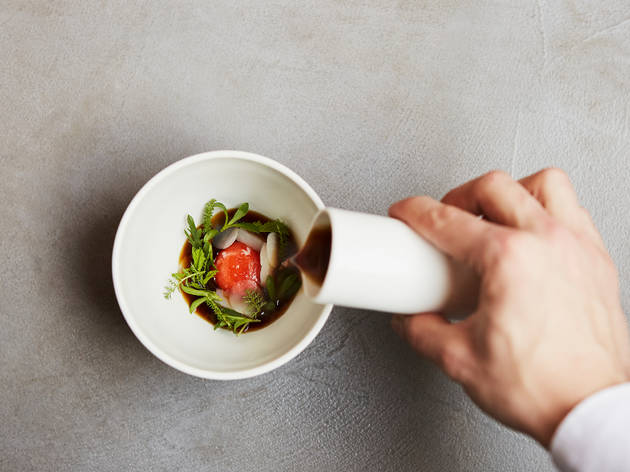 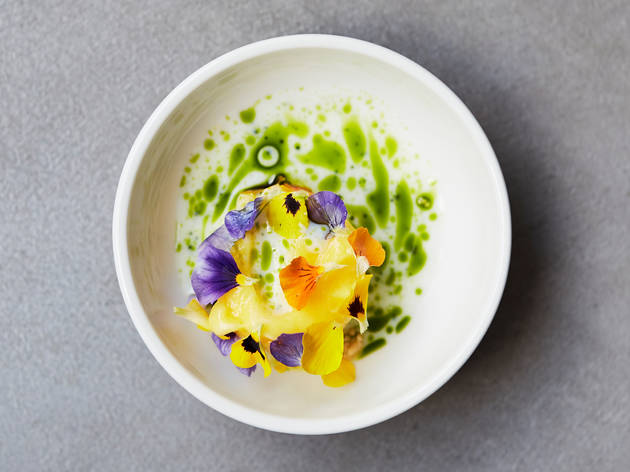 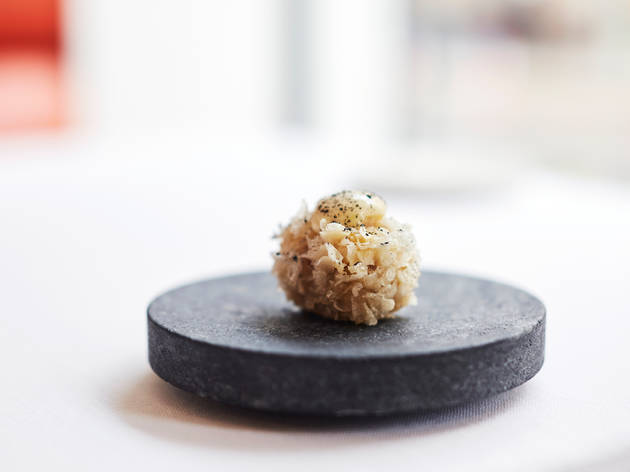 It’s pronounced ‘Ro-gan-ick’, in case you’re wondering. Having dipped his toe in the Thames with a successful pop-up, this is the permanent London spin-off of Simon Rogan’s L’Enclume, aka the best thing in the Lake District. L’Enclume holds two Michelin stars and Roganic clearly wants something shiny for its own mantelpiece. But in spite of all this, it’s remarkably unstuffy.

First off, there’s the space. This has always been A Difficult Room. It used to be the home of L’Autre Pied (itself another spin-off of a restaurant with two stars, Charlotte Street’s Pied à Terre). Made of two units, awkwardly smooshed together, it had crappy, identity-crisis décor and just felt, well, wrong. Now, at last, the space works. It’s airy and industrial-chic, with polished concrete floors, lots of light and really good rough linen. A spiral staircase leads down to the loos, with messy giant twigs along the way. Up on the shelves, there are books and statement jars crammed with pickles.

There’s loud chatter in the air. As for the thirty-something general manager, he’s the best I’ve met in years: smart and funny and makes every table feel like they’re his favourite guests. He is even nice to people who arrive looking like complete scruff-bags (ie, me). Other staff are smiley and solicitous, but essentially the supporting act.

But anyway, the food. Everything is tiny and technical. It would all look great in a doll’s house. Luckily, there are tons of courses. The full tasting menu must take all night, but if you’re smart and go midweek, you can have the cheaper, shorter option. Which, from arrival to bill, still took two hours 35 minutes. And came with 11 items, plus bread. Incredible bread. Save space for the bread.

The savoury stuff was uniformly excellent. There was a glass of fermented beetroot and apple juice, served chilled and poured at the table (this is a pouring-at-the-table kind of a place). It was deliciously sour, a proper palate cleanser. Then, on a circular stone plate, a single, fat stalk of asparagus that had been cooked in bone marrow and was humming with flavour. Next to it sat a heavy blob of pitch-perfect hollandaise, wobbling invitingly. It was like an artist’s palette, with amber-hued paint and a stubby green paintbrush.

Another highlight: crab with chicken. Creamy, delicate crustacean jostled with charred cabbage leaves (hispi, still the brassica du jour), plus puffed-up slivers of chicken skin. The whole thing was oomphed-up by a thin horseradish-laced sauce with a sharp, biting kick. It was the best bit of snap-snap-cluck-cluck for miles around.

There were too many good things to list here: onion broth with turnip and miniature cheddar dumplings; raw, clean-tasting mackerel with green strawberries… you get the picture.

It’s a pity then, that desserts, like rhubarb under a drift of nitro meringue snow, were oversweet and over-engineered. Fudge was laced with smoked juniper and reminded me – not in a good way – of truffles I once had after an otherwise great meal at the Fat Duck (spiked with pine fir, they tasted like those Christmas-tree minicab air fresheners smell). Chefs: let the sweets be.

Don’t expect your fellow diners to be cutting-edge cool cats – this is Marylebone, not Mare Street – and do expect it to be expensive. My short tasting menu cost £75 a head. The longer one is £20 more. But if you’re the sort of person who keeps a list of special occasion spots on your phone, do make a bit of space for this one.